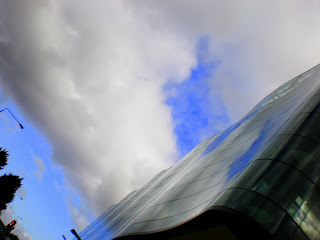 Here is the wavy western glass wall that greets visitors to Dixon Jones's spanking new Kings Place as they approach it from York Way. And we approached it on Wednesday, Day One of its opening festival, with some awe at the programme: one hundred concerts in five days, out of which I'd picked five as a sampler.

Perhaps it wasn't a great idea to locate events of significance in the 'flexible space' of Hall Two, which is really a rehearsal area. Because it doesn't have any rake, and the seats are only temporary, you're not going to see much unless you're in the front row - and, of course, even less if the musicians happen to be Indian and sitting on the floor, as they were at the 10.30am welcome to Ganesh. I suppose I could have caught all the performers at the Bhavan Centre just around the corner from home, where I once attended yoga classes, but it was good to get the buzz from a full audience including a few children, and I think we were all charged up after an exuberant Kathak dance.

The real business for most of us was the 400-seater Hall One, London's first new purpose-built hall since the opening of the Barbican Centre back in the 1980s. Here heard the first-rate soloists of the Endymion Ensemble (led by the marvellous Krysia Osostowicz) in what Anna Russell would have called a 'wispy' piano trio by York Bowen - magical opening and conclusion, nothing memorable in between - and Webern's impressive reduction of Schoenberg's First Chamber Symphony. The sound is crystal clear, but not over-clean - acousticians always want a bit of 'dirt' in the sound. As in the gorgeous great hall at Lucerne, you can hear the slightest rustle or whisper from the other side of the auditorium. 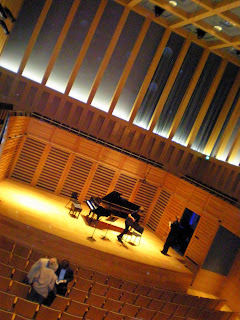 It looks beautiful: all the wood comes from one 500-year-old German oak, the 'Contessa'. It was felled on the last full moon of 2005. Where its acorns fell, new oaks will grow. I was told all this, before I read up on it, by a familiar face (but not familiar at first because he's changed his hairdo), the gregarious and supremely helpful Hogarth. He's now what Kings Place needs - a charming greeter. But he's also an illustrator and animator. I first met him when he came to my City Lit opera classes, the ideal student - one who didn't know opera but liked what he'd heard and wanted to know more for an animation he was working on. Anyway, here he was again for a bit, before he left for a meeting about his first children's book, Ethical Elephants. He promised to squeeze in my BBC Symphony Orchestra course after a singing class, and I really hope he does. 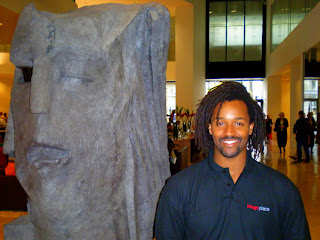 There were all sorts of other friendly folk to chat with in the little press refreshment room they'd commandeered from the new London Sinfonietta offices (the Orchestra of the Age of Enlightenment is here too; The Guardian moves in at Christmas). Michael Church filled me in on the current state of play in Tbilisi, where he's been recording choirs and ensembles; it still sounds good to go. There, too, were Geoffrey Norris and Tim Ashley, talking about the precarious paper situation, and later the wise and friendly Geoffrey Smith. Between concerts, too, I had an all too brief exchange with Alex Ross*, whose well-selling The Rest is Noise I intend to read very soon. I'd just come out with Henrietta Bredin, who introduced us, reeling from Steve Reich's Different Trains. I though Mr. Ross would be the best person to ask if he agreed that this is one of the truly great and essential scores of the late 20th century. He does. How beautifully it changes gears and speeds as it shunts back in time from contemporary American trains to 1939, 1940 and the trains to the camps - and then, of course, more optimistically forwards again. The setting of snatches of speech from its interviewees, as imaginatively harmonized for the live quartet (here, the Dukes) and their recorded selves, pierces the heart.

Regrettably, I had to skip Roddy Williams's late afternoon recital to catch my dear friend Noelle Mann's farewell at Goldsmiths, but I left Kings Place very happy. It's true that although the foyers are spacious, there's nothing especially striking architecturally speaking apart from the glass facade, but then this has all been done with private funding. Of course, it's more awe-inspiring to then walk through the covered hall of St Pancras Station... 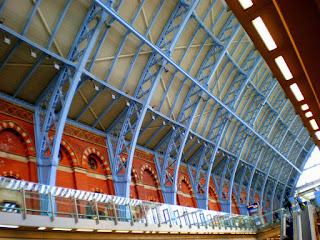 ...and on to the British Library, where I had a quick coffee with friend Simon who now works there. That has also had vastly greater sums of money poured into it. But of course it's what's within Kings Place that matters. I was entranced by the exhibition of glass and granite sculptures by Norwegian Nicolaus Widerberg, and would love to buy one of these Torsos, were it not to set me back £29,500. 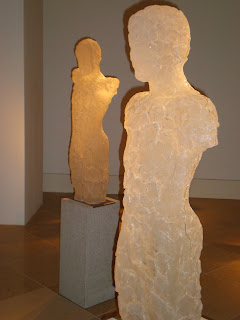 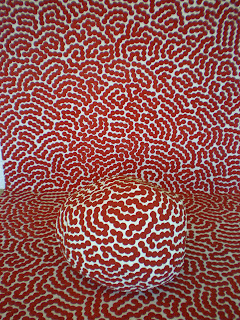 As you can see, if not hear, Wednesday was a day of sensory overload. Perhaps it was over-ambitious of me also to cram in an evening concert at the Royal Festival Hall, but we don't get the Budapest Festival Orchestra and Ivan Fischer here every month of the year (and when I and J last heard them, in their impressive home concert hall, the impact of Tchaikovsky's Manfred was unforgettable). Fischer always programmes well, and from the heart. This was a big emotional night: Schoenberg's Verklarte Nacht, with ethereal, very inward violin-solo work from Violetta Eckhardt, followed by Mahler's Das Lied von der Erde.

Now, the Budapesters don't make the most lustrous string sound among European orchestras, and the Festival Hall is harder on them than the Barbican or their Budapest base, but what they do have is priceless - a distinctive febrile quality, great depth and a youthful sense of total involvement. Similarly, young Dutch mezzo Christianne Stotijn (pictured below by Marco Borggreve) is not without a few technical obstacles to her profound musicianship (I'm sure the top of the voice could be liberated if some inspiring teacher enabled her to remove the physical tension that makes her rock from one foot to the other). 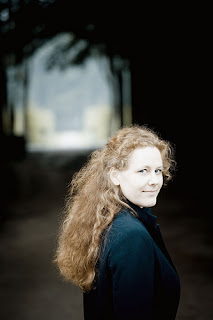 Yet I know why Fischer chose her. There are, of course, no limits to the perspectives you can open up in Mahler's exhausting 'Farewell'. I knew this would, if it worked, be quite a draining experience for me personally - following a dying friend as far as I can on her final journey has made me more prone to weep at the drop a hat than ever - and indeed, after the orchestra had finally opened up fully for the funeral march two-thirds of the way through the movement, that heartbreaking passage setting Wang-Wei's poem meant I had to stifle loud sobs. I almost didn't notice the transcendence at the end. And I realised that Shostakovich and Britten were right: there is no deeper work in the western musical canon. I'd like to reproduce the poem, including the last lines which Mahler added himself. Many of you will know it; for those who don't, I hope it will encourage you to go and seek out what Mahler in extremis makes of it:

He alighted from his horse and handed him
the drink of farewell.
He asked him where he was going,
And also why it had to be.
He replied, his voice was veiled:
'You, my friend,
Fortune was not kind to me in this world.

'Where do I go? I go, I wander in the mountains,
I seek rest for my lonely heart.
I journey to the homeland, my resting-place.
I shall never again go seeking the far distance.
My heart is still and awaits its hour.
The dear earth everywhere
Blossoms in spring and grows green again.
Everywhere and eternally the distance shines bright and blue.
Eternally...eternally...'

*footnote in 2011 - this turns out to have been a case of mistaken identity, about which HB has had a good laugh ever since. And now that I know what the 'real' Alex Ross looks like, I wouldn't have made that error more recently.
Posted by David at 16:14