Forgive yet more time out, but I keep stumbling across these extraordinary places not a million miles from London, and wanting to hymn their praises. The latest surprise, discovered during a weekend with our friends the Kafalas near Colchester, was an excursion to the deliciously-named Saffron Walden: not entirely serendipitous, since I'd read about its treasures and a friend of Tarik's and Sarah's had told them that an exhibition of Edward Bawden's middle-eastern wartime pictures at Saffron's Fry Gallery was due to end that Sunday.

The name comes about because at the end of the Middle Ages Cheping Norton, as it was then known, specialised in the growing of autumn-flowering crocuses, the saffron from which was used for dyeing and medicine (it still imparts an extraordinary flavour to food). Saffron's extraordinarily lovely setting, where as Hardy once said of 'Casterbridge' town and country still meet at a mathematical line, is due partly to the preservation of the nearby Audley End estate, which we have yet to see. What we did admire were the artistically graced houses of Castle Street, the pargeting on the most distinguished townhouse, the exquisite public space of the Bridge End Gardens and, of course, 'the Fry', a quirky Victorian building like the Watts near Guildford, but full of much better pictures of a later era. The stars are Bawden and my idol Eric Ravilious, who shared a house in nearby Great Bardfield. The main gallery has walls devoted to each. Here you see the Bawden display, with father Tarik keeping an eye on the Kafala twins as they amuse themselves with items from the toybox so helpfully supplied by the gallery.


After this Haydar came with J and I to St Mary the Virgin's, where he had fun preaching from the pulpit and was much taken with the Trompeta Real of the restored organ. We, meanwhile, just revelled in the height and light of Essex's most noble church.


Earlier in the day, the twins' weekly theatre group took us to Sudbury, just inside the Suffolk borders and the home-town of Gainsborough. Here the Church of St Gregory boasts a macabre curiosity, the skull of Simon of Sudbury, executed by Wat Tyler's mob and now keeping his head, or rather having it kept for him, under lock and key in the vestry. We had easy access to it because the churchfolk were celebrating Harvest Festival with a post-service open house. 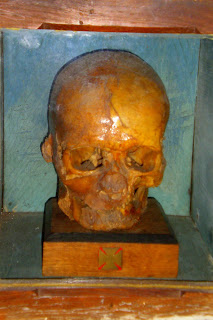 Here, too, just to complement the Lynn collection below, are a perhaps over-restored chancel roof with angels...


..and more splendid bench-ends and misericords, including one of the many 'doggies' which currently fascinate one-and-a-half year-old Faiza:


In the meantime, unexpected news arrived from another family further away in Athens. Elena Marangou sent us a CD of her performance with the Orchestra Ton(e) Chromaton(e) conducted by Miltos Logiadis of Elgar's Sea Pictures. Can I be honest and say we were expecting it to be so-so? Consequently we were startled to hear a mezzo voice of real distinction and a highly-nuanced delivery of the poems - an interpretation one would be happy to set on the shelves among the best, honestly. I said I'd be happy to mention it here, because it's easy for me to be sincere about it. I thought the publicity shot Elena sent me didn't seem to catch her terribly well, so I sought her permission to put up a picture of her, daughter Ariadne and husband Manos on the roof of the Benaki Museum, where we had an unforgettable lunch with them and another charismatic mezzo, Susie Self (she was singing one of the 'Maoettes' in the Athenian Nixon in China), in the spring of 2007.


Susbequently Elena found what she thought was a better publicity shot of herself, taken by her friend the photographer Sophia Pintzou. As I know how sensitive these divas are about being represented properly here - having had to remove what I thought was a fun picture of Riikka - I'm happy to add it, since Elena agreed that the family shot could stay. Editors should therefore use the below image. 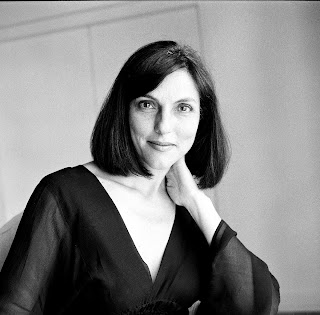 And while we're on the subject of mezzos up close and personal, I hope Ekaterina (Katya) Semenchuk is happy to advertise as Carmen in this backstage shot taken after a stunning Beethoven Missa Solemnis at the Barbican. 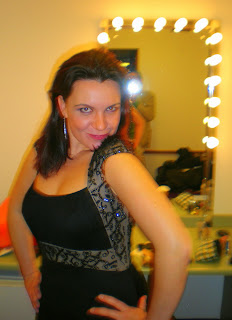 Katya is pally with mutual friends Riikka and Anneli. I missed a night on the town with them all earlier this year, but finally got to meet Katya after the concert, and a more vivacious and friendly singer it would be impossible to encounter. I already admired her singing from a debut recital disc of Tchaikovsky and Rachmaninov (which has gone walkabout; I really ought to write down whom I'm lending CDs to), her Lyel in Gergiev's concert performance of the Rimsky masterpiece The Snow Maiden, and her work with Larissa Gergieva in the Cardiff Singer of the World competition, when I was rooting for her to win. She seems a bit stuck with Tchaikovsky's Olga and Polina at the moment, but there's plenty of time for bigger things.

As for the Beethoven, it made sense to me for the very first time, thanks to the expansive focus of great Jiri Belohlavek and a tireless BBC Symphony Chorus, seemingly unfazed by the insane vocal writing. Of course the violin solo (Andrew Haveron, peerless) in the Benedictus and the drums-and-trumpets eruption in the Agnus Dei made the biggest impact, but it was all of a piece, and there was never a sense of wanting any of the Mass sequences to be over. For once, the ever-radiant Christine Brewer was not the star of the show (discussing the performance with my Inside the BBC Symphony Orchestra class last night, the students prioritised Katya without my having to say anything). Afterwards we went for a pizza with Anneli and Monica-Evelin Liiv, the Estonian mezzo on the Covent Garden young artists' programme about whom I hear many good things. We'll have a chance to judge for ourselves when she sings Madame Popova in Walton's The Bear next week.

More good company on Sunday when Malian medical researcher Guida Landoure invited us to celebrate the end of Ramadan with a belated Eid feast. It was a truly international gathering: three Malians, five Germans, a Dutchman, an Albanian Greek, an Ethiopian Australian, two Romanians plus us and our friend Kurt Ryz. I'm putting up this photo of Guida, his cousin Kolado and friend Lamine serving up the fruits of their afternoon in the kitchen because Sophie and Keita, Guida's friend back home, will want to see this in Djenne, and Sophie can't download pictures when I send them to her: 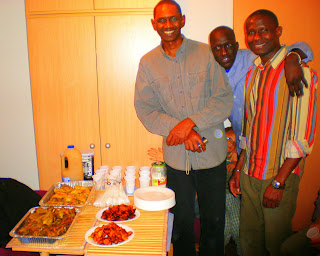 Guida and his fellow chefs served up succulent chicken and lamb in flavoursome juices with fried plantain and bananas. Drinks were dèguè made with millet and creamed milk, lemburuji (ginger and lemon) and dabileni (a juice from a certain type of hibiscus), the last two of which we consumed in vast quantities when we stayed chez Sophie at Christmas. In the meantime, the Hotel Djenne Djenno food supplies increase (Sophie recently marinaded and cooked the legs of the garden frogs and lived to tell the tale). Now there is another potential supply: honey. I love this picture from her Djenne Djenno blog of bees swarming around her flamboyant tree (best seen in enlarged form): 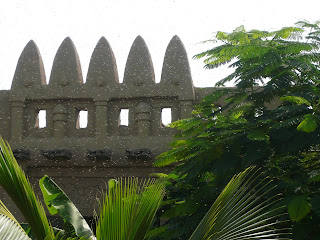 Apropos of nothing but my melimania, I want to show you my current jars of top honey. 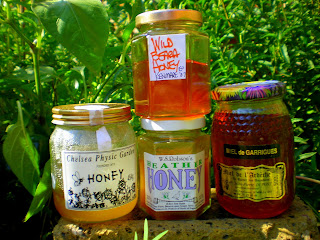 The best I've ever tasted still comes from the Asco Valley in Corsica (last year's supply was juniper 'miel des neiges'), but the Chelsea Physic Garden 2007 vintage ran it close, and the souvenirs of our Irish and French trips in the summer are still proving tasty and healthful. The story behind the Chain Bridge heather honey launches our friend Hattie Ellis's delightful book Sweetness and Light, which I can't recommend too highly. It makes the perfect antidote to her stomach-churning latest volume, Planet Chicken.
Posted by David at 12:00

Keita wants to know why there wasn't any To or any Tige Dege? Or were there no women at the party he wants to know?
We are thrilled that you are keeping in touch-
lots of love from Mali
xxxsophie and Keita

What are To and Tige Dege? There were five women at the party, so I'm curious to know what we missed out on. I can always ask Guida, but is it a joke and would I be putting my foot in it?

There WAS Salif Keita, of course. And I just bought Ali Farka Toure's last album in the HMV Shop, after holding out two to a west African connoisseur who happened to be passing.