The Frank Sinatra of the Ottakring 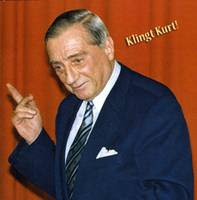 Our Viennese friends Tommi and Martha, for all their progressive world-outlook, are great fans of popular musical traditions in Vienna, where the recent revival of schrammel-bands has gone hand in glove with a welcome back for the last exponents of that sentimental, sometimes satirical, sometimes rather louche art-form the Wienerlied.

Following the recent death of one of its most senior interpreters, Trude Mally, there's only one great performer still alive whose memory stretches back to the golden years. Kurt Girk was high on Martha's list of Vienna's top attractions, though she couldn't find anything on while we were staying. So imagine the Gellert-Bernardi pair's delight when the dapper 77-year old Girk just turned up at the newly-resurrected Blauensteiner 'Gastwirtschaft'. We'd finished our meal, so we just kept topping up his wineglass in the hope that he'd eventually give us a song as he intimated he would. Here he is happy to pose with me: 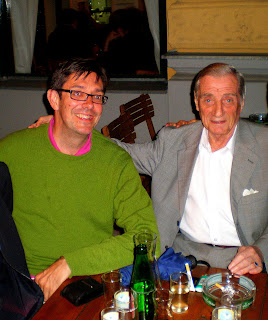 and in conversation with Martha and Tommi: 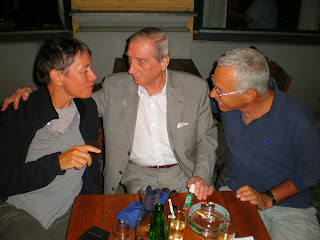 To elicit the promised performance, J had to sing 'Forgive me if all those endearing young charms' and a burst of Lensky's aria to encourage him, and we were feted in return with a highly coloured account of 'O du bezaubernde Wienerin'. 'That's a real tenor', Girk declared of his encourager, and added that Gigli and Pavarotti would always be the tops for him in Italian rep.

Girk was once a humble tailor form Vienna's poorest and also liveliest district, the 16th or Ottakring, making suits out of a single needle and thread (the Ottakring, by the way, is now a vivacious Turkish and Balkan quarter, with a large number of cheap but echt restaurants). His master was Richard Tauber's personal assistant, and he was interested to learn that Tauber is buried in Brompton Cemetery round the corner from us. A friend of his once shared an apartment with Joseph Schmidt, but Girk knew intimately that other glam-tenor of the era, Jan Kiepura, and his wife Marta Eggerth: 'she's still alive - would you like to meet her?' Coincidentally, the next evening we came across a photo of Eggerth and Kiepura on the walls of that wonderfully old-fashioned little cinema the Bell'aria just by the Museumsquartier. 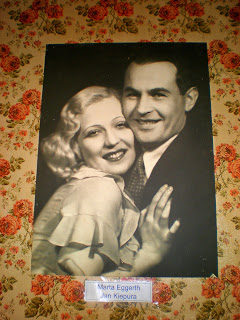 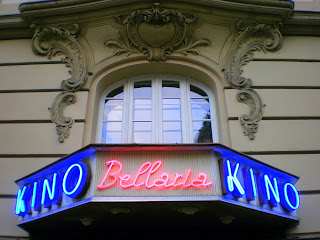 Anyway, meeting one great star of yesteryear was quite enough for one evening, though I still have to get hold of the CD (cover reproduced above). There's a film on YouTube of Girk performing recently at a heuriger, but I want to hear him in his prime.

Managed to pay homage to my old Viennese friend Trude in last night's Shostakovich talk before 'The Year 1905'. As you'll hear me say if you tune into the 20-minute interval version on Radio 3's Listen Again facility, up and running for the next six days, I was having tea with her after a class when she told me her favourite Shostakovich symphony was the Eleventh. Surprised, I discovered the reason: the third movement's eloquent theme for violas is based on the requiem-song for the fallen of 1905, which Trude knew from her Socialist Youth Movement years in 'red Vienna' as 'Unsterbliche Opfer' (she wrote out the text and I still have that pasted into the back of her memoir). As someone whose father was killed in the First World War, and whose mother, brother and sister were murdered in Treblinka, she would have found that lament especially resonant throughout her life.

Among chunks which had to go from the rapidly-edited interval broadcast was an interesting - or so I thought - insight from another dear friend and student, Kazan-born Martin Zam, who died at the age of 94. He told me his father was present at the 1905 massacre, and that he told him it started because the soldiers fired into the trees to try and disperse the crowds. Unfortunately there were children perched there, and when they fell to the ground the panic and the onslaught began.

Here, to lighten the mood, is a photographic intermezzo, a shot of the Proms queue for Shostakovich 11 on a sunny scorcher of an afternoon taken by a younger student and friend of mine, Piala Murray, after the talk. The ones of me are not for public consumption. 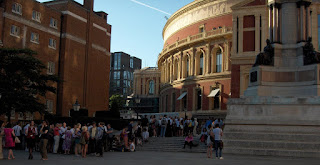 Bychkov's and the BBCSO's performance of the Eleventh revealed a few cracks in the basic edifice, but the finale - the trickiest movement to bring off - had a hair-raising energy amd panache. Some contested the sharp cut-off of the metallic bells, when Rostropovich and Stokowski used to let the sound reverberate, but that was an unforgettable noise. Alas, the first half flopped for me in a brutal and heavy performance of the Rachmaninov Paganini Rhapsody in which Bychkov was as guilty as barnstormer Dennis Matsuev. The 18th Variation, though, turned out surprisingly sensitive. Detlev Glanert's Shoreless River was another of those works Prokofiev would have called a 'one-day butterfly': skilfully orchestrated and with a few nice melodic lines including a very beautiful one for the cor anglais, but not destined for a long concert-hall life. Still, it was thoroughly prepared and Bychkov gave it the best possible presentation.

Still hung over from the magic of Salonen's Monday Ravel, I couldn't quite bring heart and soul to the programme of the febrile Budapest Festival Orchestra and Ivan Fischer the following evening. Fischer is a real live-wire, looking here in the first of Chris Christodoulou's photos like a younger Harnoncourt (who, by the way, has pulled out of his forthcoming VPO Prom due to illness): 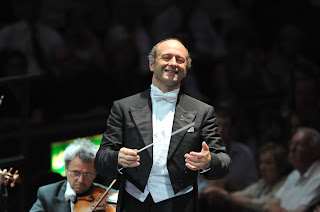 and he has fashioned a unique identity for his orchestra; together they always deliver focused interpretations con amore: 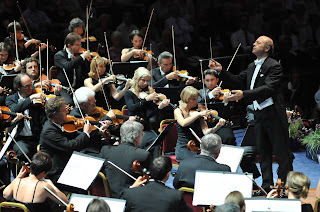 Leonidas Kavakos, unquestionably one of the world's top violinists, projected sweetly and with impeccable intonation into the Albert Hall vasts; but even he couldn't quite persuade most of us that Bartok's Second Violin Concerto doesn't outstay its welcome. The Budapesters swept with inimitable pliability and golden horn-edged magnificence through Dvorak Seven, but again it was my fault if I wasn't quite in the mood. The encore, Strauss's Peasant Polka complete with rustic vocalising, proved that Fischer should be signed up by his snootier neighbours in Vienna for their New Year's Day concert, and it offered more polished verve than anything in the Ukulele Orchestra of Great Britain's late-night offering.

The Albert Hall was packed to the rafters yet again, but this time with folk who'd signed up to be members of a Special Club with their own ukuleles. My amusement at the unusual circumstances quickly dried up as the over-amplified group settled into a string of covers (and they can play, but they can't really sing and shouldn't). Felt like a suburban evening at the Wheeltappers and Shunters Social Club. So we hung around for the Danse Macabre transcription, and even that wasn't very good, so off we went. I was expecting something of the calibre of those Russian balalaika orchestras who play Schubert symphonies, and this was nothing like. Dear Roger Wright, I commend your shrewdness, but please note that you should be looking to the Ossipovs of Moscow, if they still exist, for top light-hearted quality. This lot might be fun in the Cecil Sharp House, but their oft-touted rep doesn't really sit well in Albert's Colosseum. I know many will disagree with me, and I'm glad the hall was full, but - never again.
Posted by David at 11:32

I loved reading this post. The richness of the Vorstadt and its characters. Have posted to my Facebook page...

Thanks, Gavin: I thought you might. How we adore that extraordinary, contradictory city, no?

This time I found it more inexhaustible than ever - and there's so much more to explore in the vicinity: the extraordinary Baden bei Wien, which I still want to write something about, the Wachau, Semmering and the Raxalp: all of them so rich in associations with the great geniuses we love so much.

I did regret, though, that I didn't have time to get to the Hermesvilla and that exhibition you wrote about. The big Waldmuller show was, for me, a bit of a disappointment.