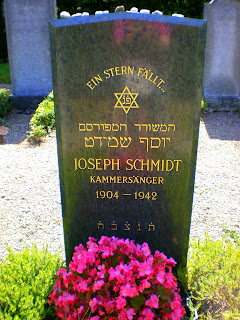 It was one of those oddly serendipitous moments. Carl, in whose Zurich flat we were staying, sings in the opera chorus there, and among his CDs were a few of my favourite tenor, Romanian born Joseph Schmidt. I came to Schmidt through my dear late friend and student Trude Winik, who grew up in what she called 'our red Vienna' and always claimed Schmidt as 'one of our people'. As such, he met a tragic and unnecessary end, dying in a Swiss transit camp aged only 38 of disease and exhaustion. But before that the diminutive Schmidt was a matinee idol, a film star - once his appearances on stage were limited by the growing anti-semitism - and a prolific recording artist. 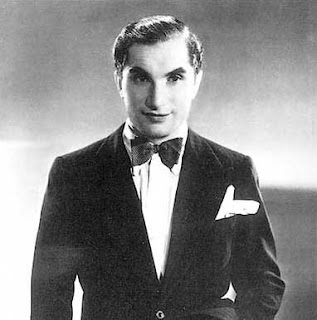 We don't know enough about him in the UK, but in Germany he remained celebrated enough to merit a stamp in the centenary year of his birth. 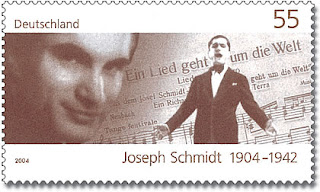 I have four CDs at home of Schmidt's HMV recordings, and Trude gave me a couple of battered old records, but I'd never heard the Preiser disc Carl owns of 'Religious Songs and Arias'. So as well as marvelling at the wealth of different tones Schmidt brought to characters as diverse as Massenet's Rodrigue, Tchaikovsky's Lensky and Korngold's Paul, it was amazing to come across him as cantor in a couple of Hebrew songs. Even more amazing was to read in the booklet note that he was buried in the old Jewish cemetery in Zurich.

It seemed too strange a coincidence to pass by: we were catching the train the next morning to Vienna, where of course my thoughts are often with Trude (who has a crucial part to play in the talk on Shostakovich 11 tonight, too). So we found out how to get to the cemetery, took a No. 13 tram to Albisgutli on the edge of the Rietberg and walked along a high path past smallholdings to what turned out to be the NEW Jewish cemetery. Further enquiry from a venerable orthodox gentleman with one eye led us down the hill, and there we were, able to lay two stones on the great man's gravestone.

Today I learnt of the death, aged 72, of Hildegard Behrens, another star who this time meant so much to my operatic wunderjahren. It was 1978 and I was 16: I'd been turned into an incipient opera queen hungry for Sutherland by mamma, who'd seen the Bell Song from Lakme in some film or other. But I was slowly coming to realise that much of the rep Joanie sang, including that season Donizetti's Maria Stuarda, wasn't quite to my taste. I wanted Strauss, Wagner. And having just bought the LPs of Behrens's Salome with Karajan, I was thrilled to bits to go to a friends rehearsal of the Royal Opera production. She stunned me with that odd, silvery sound and that terrifying development from innocent to harpy. I went backstage and the lady, clad in a leopardskin coat and with huge false eyelashes, was charm itself. She wrote 'Best wishes for you' on the back of the cast-list (in which I note John Tomlinson sang Fifth Jew) and signed my EMI booklet not just on her photo 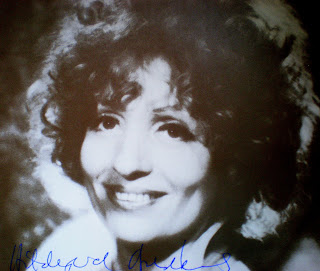 but also on the booklet's cover, across the midriff of a naked dancing princes who, surprise, surprise, didn't do much for me. 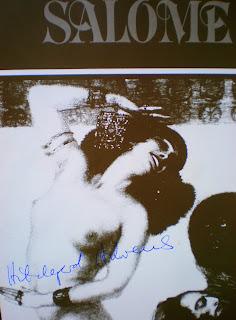 Since then I saw Behrens's Elektra twice, relished her Met Brunnhilde and her Dyer's Wife for Solti on CD and will always remember her great singing acting as synonymous with my own musical growing-up.
Posted by David at 09:41

David I was sorry to miss your talk about Shost 11 but went to concert.

I thought the performance brought out the logic and the symphonic arrgument/development. To my ears all the discussion of the history/genesis/politics all seems very secondary to the sheer sweep scale heft of the work. (?)

Sebastian - you should have said you'd be there and we could have met.

Yes, what remains is a timeless work of art. It isn't by any means the greatest of his symphonies, but on its own terms - using and developing all those proto-revolutionary songs and marches - it does a brilliant job.

I'm in two minds about Bychkov, but he does make the orchestra sound brilliant and the finale, the most difficult bit to bring off, was superb.

Apropos of what you say, you might like to use the 'Listen Again' facility to hear the talk. I've no idea yet what they used for the 20-minute interval out of our 45-minute ramble.

Dear David
Norman Lebrecht is the man to talk to about Cantorial music, known in Hebrew as Chazzanut - he really is expert on this one(pace your comments about the subject in this blog)
sincerely
Anthony Noel Baker