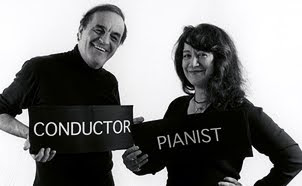 Well, No. 1 may have gone from last night's Proms programme - the Prokofiev First Piano Concerto, Martha Argerich's second promised offering of the evening, was a casualty of her recent illness, we're told - but what the great Argentinian did give us, Ravel's adorable G major Concerto, showed that she is surely first among pianists for wit, fantasy and tone-colour.

More surprising, for me, was the light and airy shape into which Dutoit had knocked the Royal Philharmonic Orchestra for the concerto, and what he did after the interval with the irresistible Prokofiev replacement, the Love for Three Oranges Suite, and the Musorgsky/Ravel Pictures from an Exhibition. Despite fine recordings with Gatti, the RPO has dropped off the performance radar for me in the last five years. I'll admit a falling-out with new marketing brooms sweeping in and demanding that notes had to be written to attract first-time listeners to concerts; so the big and money-losing Mahler cycle was the last thing I did with them. Anyway, great days are now ahead with Dutoit, that's obvious: and I say that as one who's always had my doubts about him. Whatever his faults, as a colourist he is surely the Ravel of the conducting world.

Even the 'new' work at the start, Claude Vivier's Orion, was a huge improvement on other beginners I've heard this season, namely Casken's Orion over Farne and Rebecca Saunders's traces. I say 'new' because although this was the UK premiere it was written in 1979, one of only two orchestral scores achieved by the French-Canadian composer before his death at the age of 34. Hurrah, a melodic shape seconds in, superbly articulated by the RPO's principal trumpeter (two are advertised in the programme, so I'd better not guess which; though of course it immediately made us anticipate the start of Pictures). And, sectional though the piece was, the drone bass + overtones on the strings towards the end were mesmerising; wish it had developed a little more.

Martha stunned us with Ravel's first flights up and down the keyboard, made us laugh with her comic timing, brought tears to the eyes with the hyper-poetic second subject, made the trill in the cadenza sound like some weird cimbalom and always tuned in to the chimerical orchestral playing. The start of the slow movement, though sensitive, projected into the hall as if we were in a salon yards away from the pianist (I was two-thirds of the way back in the arena), and Argerich's filigree floating over the cor anglais's reprise reminded me how Yuja Wang had missed the point at a similar moment in the Prokofiev Three with Abbado (also underlining that Ravel had probably heard and known that work, just as Prokofiev would often return the compliment). So here we had refinement without a sense of playing for oneself (the problem with Lang Lang in the slow movement of Chopin 2), just as in the finale there was helter-skelter danger in fast passages without scrambling (Stephen Hough, please note). The glorious encore, a Scarlatti sonata that sounded like Busoni, was if anything even more elusive and will-o-the-wispish. At its end, Martha led the RPO leader off: no more, alas.

Oh look, here she is playing the same piece in Turin last year. As usual with her, it's by no means the same interpretation. Again, scintillating pianism doesn't get any better than this:

This, by the way (2/10), has turned me back to pianistic Scarlatti sonatas. I hadn't taken my Pletnev recording off the shelf for years, and it's captivating, though in quite a different way: earth to Martha's air.

What was new for me about the Three Oranges Suite? Above all the full-throated brass playing, and a low horn solo in the bass line just before the end of 'The Flight' which I've never heard before. Dutoit in his advancing years is becoming as relaxed as my hero Neeme Jarvi - much shoulder conducting, lovely bounce for the March. And I tell you, for Radio 3's Building a Library I must have heard some forty or so recordings not just of the Ravel-orchestrated Pictures but all the others, and if this one were to sound as good on CD as it did from where I was standing, it would beat Jansons to the top of the list. My notes were reprinted in the programme and can still be read here.

Dutoit, after years of experience, fully grasps the interconnectedness of the drama, the distorted self-portraits even in the individual numbers between the Promenades, the terror of 'Catacombs'- oh, my goodness, five of the six surviving Hartmann paintings/sketches which inspired Musorgsky are on Wikimedia, so let's have the ones pertinent here - 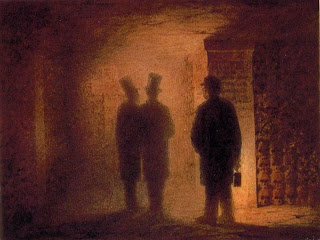 and the Satanic timpani and bass drum dialogue at the start of the Baba Yaga flight (Hartmann only sketched the witch's 'Hut on Fowl's Legs' as a clock design). 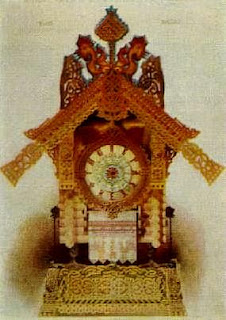 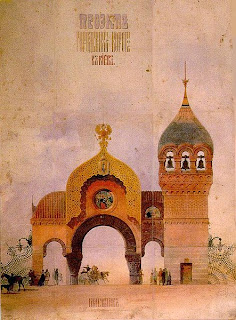 didn't broaden majestically at the end, that's true to the matter of fact spirit of Musorgsky (Jansons is even faster right at the end, and I like that). Mustn't forget the very prominent and artistic horn solo in the second 'Promenade' or the tuba with a nice touch of vibrato in 'Bydlo'. 'Tell me, wasn't that a really special performance?' asked the nice man behind us with two attentive children in tow. And I could boast, with my Building a Library anorakish-for-pay 'heard every one' behind me, that it was. I should just add that the audience, one or two coughers apart, couldn't have been more different from the Lang Lang crowd - more discerning piano lovers, perhaps, who'd booked their seats early - and their concentration played a palpable part throughout the evening.
Posted by David at 09:57

Great to see some of the original Hartmann designs. It sounds like a wonderful evening all round.

I first saw those designs in colour in Ashkenazy's performing edition of the Musorgsky original. Wikimedia Commons has them all bar the poor Jew Schmuyle.

Well, I thought it was wonderful all round - but not everyone agrees with me...

I get a sense of deja vu all over again already.

The Evening Standard's critic had a similar Damascene "Christ, are the RPO really that good" moment last year....

Meaning what, exactly, Sebastian? I speak only from my personal experience, and I've explained that though I haven't heard them 'live' for years, I loved several recordings they made with Gatti - Prokofiev R&J excerpts, Mahler 4, Tchaik Six with a stunning Serenade for Strings.

So, though I can't open your Evening Standard link as it's posted (and will try), I reserve the right to my own mind on this.

I do know that in previous years, they were only as good as the conductors they got - that's to say, great with Temirkanov, in some of the Mahlers (8 with Sinopoli was overwhelming) and above all unforgettable VW 4 and Job with Tod Handley.

When I read your piece I remembered Fiona Maddocks writing the following after Gatti's Prom with the RPO, and it rang a bell, that's all.

The RPO doesn’t enjoy the same critical attention as the other London orchestras. Its remit is wider, it plays classical pops concerts with titles like Filmharmonic and it has a burgeoning residency in Lowestoft.

Nor does it seek the usual media attention. I haven’t been disturbed by a press release from them for years.

So when these underrated players deliver a Tchaikovsky’s Fifth Symphony which could rank as one of the best performances of the season, a stamping ovation is the right response.

and your thought rang a Kiev-like bell with me,that's all. No offence intended!

No offence taken! Fiona Maddocks was certainly right about the lack of media-savviness: I heard next to nothing about the RPO's live activities once it left the South Bank. The occasional poster for a blockbuster at the Albert Hall and a pops concert, that was it.

They had Gatti but either he wasn't available much or they didn't channel their funds into using him a lot. The relationship was good but didn't go far enough.

Your link DOES work if it's pasted into 'open file'. I thought the reader's comment was especially flavoursome.

I was also fortunate to be at this concert, so thanks for putting up the Hartmann pics which I didn't even know had survived! - don't they have such a colourful and a textural richness to them that really helps to tell you how and what got Musorgsky going? If they had glass over them during the exhibition, then there's your composer's relected face too, mingling with the pictures, as you say...
I know you were at the Ravel "Ma Mere L'Oye" Prom as well; and as that also was about fairytale (moving into mythic) tranformations, I have to say how fascinating it is to see different composers' responses to these - and whether what they set out at first to do consciously (often at the mercy of 19th Century compilations?)actually really bears out when the music itself begins to speak its own deeper force. The Baba Yaga part of "Pictures at an Exhibition" is my absolute favourite of the piece, and I found a wonderful book once by Clarissa Pinkola Estes called "Women who run with the Wolves" (1992)that (and now probably of many)offers back to this rather demoted witch her full transformative soul-shamanic glory. In her pain is the change, as it goes, especially with the skulls. I don't think you indeed get The Gate at Kiev without her - but not as symbol of Christian-versus-Evil - but just an added wealth of modern in-depth psychology to give us even more...

But thanks also for posting the great Martha Argerich vid. I saw Yuja Wang do the same concerto with the LSO in June, and with the Lang Lang I'd agree it was just a pointless exercise in both youth and audience exploitation all round.
As for the astonishingly rich quality that night of the RPO: when it got to the end of the Musorgsky, from where I was, just up and behind on the second tier, the cello section all played together as if a storm-wind were blowing through their clothes. Well, if we've entered now into the realm of a natural phenomenon...

Thank you for your wise comments on Vivier's Orion, David. It was a deeply impressive work with Scriabinish twinkles and Brucknerian sonorities and the quite startling use, twice, of a baritone popping up through the texture first, then starkly in the final bars. I hope it gets another airing because it's too good to leave, dare I say, on the shelf. It showed up Schnittke's early "Nagasaki", rather.

Much as I love Ravel's G major concerto, the outer movements did little for me. As usual, the slow movement held me fast.

Such interesting ideas, Piala - thanks for elevating our thoughts and pointing them in a new direction.

And, Colin, what about the Scarlatti encore? Have you watched the Turin performance above? Friends who've seen it agree with me that it can't get much better than that.

I'm puzzled, though, by them wot thought the Musorgsky/Ravel was a mess. Could I be so far wide of the mark? OK, some might find it cold - I felt it was just a bit more classical than usual - but badly played, no way.