How to begin on Finnegans Wake 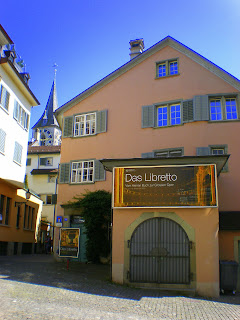 Make your way to the Museum Strauhof in one of Zurich's prettiest streets, the Augustinergasse. Arrive just before 7pm any Thursday, ring the bell if necessary, climb the narrow wooden staircase to the James Joyce Foundation on the top floor, and there you will no doubt be greeted by that doyen collector of Joyceana Dr. Fritz Senn. Joyce of course was in Zurich for several extended periods, not least towards the end of his life when he was working on Finnegans Wake. This photo of JJ by the Limmat comes courtesy of the Foundation's website. 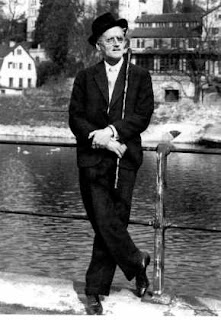 But back to Augustinergasse on a Thursday evening. For the next one and a half hours you can join Dr. Senn, Joyce experts and students from various walks of life in conjecturing the meaning of no more than a couple of pages from the world's most baffling novel.

It's surely the only way to deal with Finnegans Wake, and if it sounds heavy-going, nothing could be further from the truth. For a start, reading out loud highlights its vigorous poetic prose. Joyce's playfulness is reflected in Dr. Senn's limerick-telling, the bawdy jokes of a German/Swiss gentleman well versed in the Koran and the general level of laughter around the table. Although I'm not yet a Joycean myself - this may have changed my mind - I was able to bring a little bit of my own curiosity to the discussion, namely when we got to 'Maye faye, she's la gaye, this snaky woman' and Melusine, much on my mind of late, kicked off a discussion on mermaids.

It was a warm summer evening. The trees outside the open windows rustled in the breeze and the bells of several nearby churches went crazy for a while. Afterwards I chatted to Dr. Senn and a very knowledgeable Joyce scholar, Ron Ewart, formerly (or presently still, I couldn't quite make out) of St. Gallen University. Ron told me there's a lively Joyce week every year in Trieste. Hey, couldn't that be a good way of getting to know both the city and the writer? Count me out for the Joycefest, said J, though I'll come to Trieste and do my own thing. Vedremo.

Then it was time for Dr. Senn and a student to clear up and shut the windows 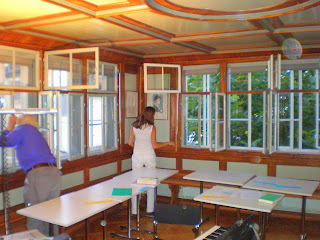 and most of the party adjourned for a drink (I trust not to the former James Joyce Pub, which has been tarted up beyond recognition, we're told, and could be any fashionable bar anywhere). I couldn't join them as we had to catch the train early next morning for Vienna. And I did so want to go back. But maybe we should start up a Finnegans Wake reading group in London. Anyone like the idea? Know if there's one already, and if so, where? It's the only way to deal with this otherwise impossible masterpiece.

I shouldn't neglect to say that the Strauhof, home for various literary events, was hosting an exhibition on 'The Libretto', which you can still just catch before it closes on 6 September. Heading up the stairs earlier that Thursday to make enquiries about the famous free-for-all seminars (Ulysses on Tuesday evenings, by the way, if you're in Zurich), I hadn't been inclined to pay 10 euros for such a showing (what's to see, after all, I thought, in a libretto exhibition?) But I was arrested by Stern's wonderful designs for the original Strauss/Hofmannsthal Ariadne auf Naxos in the first floor hall - firmly on the walls, not popping out as depicted in this photo provided for the exhibition from the Freies Deutscher Hochstift/Frankfurter Goethe Haus: 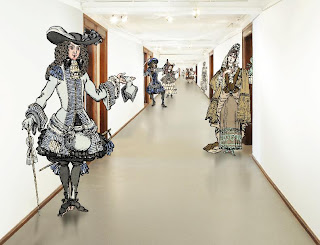 So we paid our money and were rather impressed. The Strauss-Hofmannsthal section had pages of original poet-typescript-and-composer-amended libretto for Die Frau ohne Schatten, inter alia. Best of all, I've never had the chance to hear snippets from Hoffmann's Undine, as I had hoped to do for the Offenbach Contes classes at the City Lit, and there were excerpts from four scenes to listen to in the first room. All they confirmed were that Hoffmann was no Weber when it came to the other-worldly. Didn't know the premiere had enjoyed such lavish Schinkel designs, either. Here's E T A depicting himself as his alter ego Kapellmeister Kreisler with the score of Undine on the spinet (again, courtesy of the Strauhof, copyright the Staatsbibliothek Bamberg). 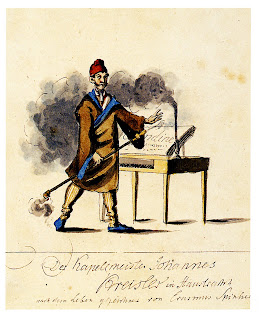 It brought back happy memories of my most treasured read last year, The Life and Opinions of the Tomcat Murr. I've been pursuing the next in line of Hoffmannesque succession with the very lively Penguin biography of Hans Christian Andersen by Jackie Wullschlager. A birthday present from master abridger Isabel Morgan, it can be warmly commended in turn to anyone interested in that period of European history and the arts, since Ms. Wullschlager gives such vivid background. 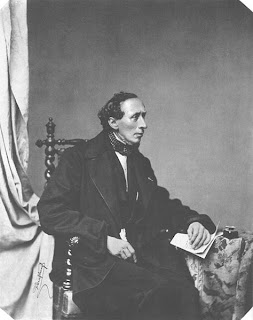 Of course the stories are the thing, and never was a writer more autobiographical through the medium of the fairy tale. Alongside the biography I read Wullschlager's Penguin selection, translated with what for aught I can tell seems like exceptional spirit and directness by Tiina Nunnally.

The most famous tales are, of course, exquisite, above all the cruel and poignant Little Mermaid - it was my Rusalka quest which set this all off - and The Nightingale (even Stravinsky's opera gives little hint of Andersen's poetic phantasmagoria and his nature-descriptions). Later in his life, Andersen's more adult tales become very troubling: pre-Kafkaesque in The Shadow, even more nightmarish in Auntie Toothache. I'll expound no more, but urge you to read them with a mature eye for a unique literary style if, like me, your childhood was touched only by hearsay, the Danny Kaye film and those rather well-made East German-originated TV 'Tales from Europe' - I'll never forget The Snow Queen in that telling - rather than by reading the real thing.

Finally, since we're still in nymphish mode, the tragic tale of Rusalka as so superbly recounted at Glyndebourne had a now-celebrated realistic interruption the other week when the glorious Ana Maria Martinez fell into the pit and was saved by stalwart Santiago Sabino Carvalho's cello. Glyndebourne has her personal angle on the mishap here. It's been quite a time of diva disaster-transformed-into-trouperdom, what with Joyce DiD and all (now happily out of plaster, she tells us).
Posted by David at 14:48

I'm delighted someone's responded about FW. But I have to say that I haven't yet progressed beyond those few pages, though I've bought my copy and asking advice about a good annotation.

What's your angle, tell me more?

David (definitely not a Dave, sorry.)

"...and those rather well-made East German-originated TV 'Tales from Europe' - I'll never forget The Snow Queen in that telling - rather than by reading the real thing."