Bourne at the rainbow's end 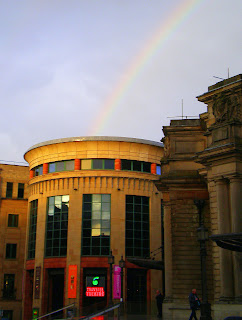 Piling off the bus from Hawick, where we'd spent twelve hours with the Clough family at the end of a long Borders weekend, our first Edinburgh destination was the Traverse Theatre, and a real pot of gold, the first part of A Life in Three Acts, in which Bette Bourne talks to Mark Ravenhill about his extraordinary life.

I'd only been dimly aware of Bourne's pioneering 'queer theatre company' Bloolips , and I don't think I'd seen him on stage until his astonishing performance as the Nurse in the previous (and by all accounts better) Globe Romeo and Juliet. What was so revelatory about the characterisation then was that, although obviously en travesti, he eschewed all camp mannerisms and mugging. His Nurse was far and away the most real personage in the play.

So reading an enthusiastic review over breakfast in Chapelgill, Broughton, we determined to catch at least part of this modest trilogy. Ravenhill has written eloquently of the importance both of memory - he 'lost' three weeks of his life after a major epileptic seizure - and of the vital historic part Bourne and co have played in making our lives easier. Here's la Bourne with Ravenhill as photographed by David Gwinnutt for the Traverse. 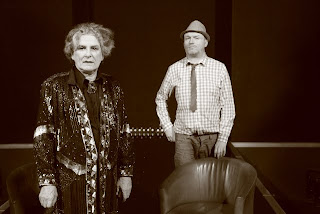 Bourne is funny, touching, transfixing - his confidential way of turning to individuals in the audience is the best kind of theatre - and of course ad libs as the fancy takes him. We, for example, were treated to three jokes told by drag queens in the Vauxhall Tavern. One's clean fun, one's naughty, one's overtly obscene, so I'll go for the one in the middle. 'My first husband was a gynaecologist. He used to look at it. My second was a psychiatrist. He used to talk to it. My third was a philatelist. Ooh, I do miss 'im'.

Jokes apart, there was plenty of thoughtfulness, and Bourne also turns out to have been an impressive classical actor. We heard a recorded excerpt from a speech in Edward II, which he said was a turning point: 'that wasn't me, I was always putting on a straight role'. Act One took us through his childhood and teenage years finding out what 'gay' was up to the watershed of the first political meeting he attended at the LSE. Acts Two and Three can be caught at the Soho Theatre later this month - we'll be there.

By more serendipity (current buzz-word, sorry, there's no other), we saw the divine Bette again later that day, having left the King's Theatre precipitately. Whoever saw the Monnaie production of Monteverdi's Ritorno d'Ulisse directed by William Kentridge and thought it would make a fine centrepiece to the 2009 Edinburgh Festival must have been devoid of sight and hearing. I've seen beguiling puppetry, namely in the RSC's Shakespeare Venus and Adonis, but you need master puppeteers to give the creatures life. Here the singers who stood by their alter egos always detracted from the Thunderbirdish figures, and their techniques for the most part left a huge amount to be desired (though the Penelope, Romina Basso, was distinctive and Julian Podger warmed to Ulisse after a dodgy start as Human Frailty).

The King's was stifling, the experience enervating, so after 45 minutes of torture we sought an exit - and landed up at an alarmed security door. Had to creep back through the auditorium, found the front - and out came Bette. He'd been struck by a bad cough, but - 'oh, how I hate puppets', and agreed that the whole thing was dreary beyond words. So he graciously consented to be snapped, and very gorgeous he looks too. 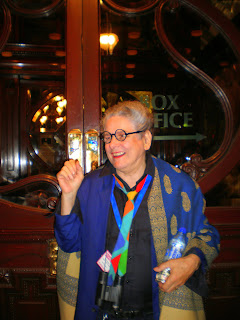 The purpose of being in Edinburgh was to spend quality time with the lovely Caroline Boyle and her husband Alan in their Hanover Street flat with stunning views over the Firth of Forth and the New Town, including St Stephen's Church in the Stockbridge direction 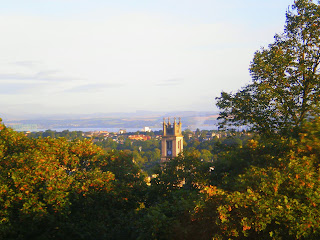 as well as my old home in Dundas Street. 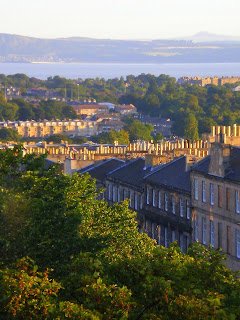 We were also there to visit Ruthie in the Gilmerton house and studio we hadn't so far seen. After a Wednesday lunch in her fair company, we headed back to the centre of town and managed a few more festival events.

As Caroline and Alan were holding a party in our honour that evening, I couldn't make the Scottish Chamber Orchestra concert in which Sir Charles Mackerras was to conduct the chorus-and-orchestra version of Haydn's Seven Last Words of Our Saviour on the Cross. So I asked if I could attend the afternoon rehearsal, and the answer was affirmative. Then we heard beloved CM was ill and wouldn't be conducting. The poignancy was reinforced by the poster in which he is the symbol of the musical festival: 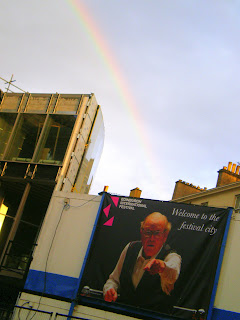 Well, my thoughts were certainly with him as I got to know this restrained but for that reason all the more moving Haydn work. Garry Walker did a fine job shaping and balancing in the rehearsal. The SCO Chorus (Scottish Philharmonic Singers in my Edinburgh days) phrased the a cappella 'words' to perfection, and you couldn't have a better line-up of soloists, capped by the soaring, musically attentive Rebecca Evans with Christine Rice subduing her tones to blend appropriately. I spoke to la Evans at the end, and we both hoped and prayed that Sir Charles would be well enough to conduct her in that near-perfect McVicar production of The Turn of the Screw when it returns to the Coli in November.

There was just time before the soiree to see Trestle Theatre Company's play about Lola Montez in which Ruth's friend, flamenco guitarist Ricardo Garcia, was providing a constant musical narrative. His subtle musicianship is a joy, and he was abetted by the sexy flamenco dancer - of course the word 'sexy' is redundant in the company of 'flamenco dancer' - Frederic Gomez from Barcelona's Increpacion Danza. Ruth had previously taken this picture of them doing their stuff on the Royal Mile: 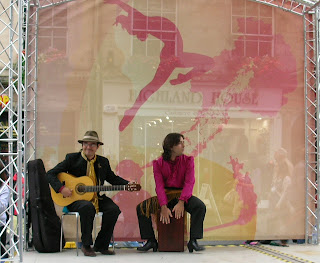 The play was a lot more entertaining, and concise, than the disappointing Max Ophuls film. Lola was splendidly taken by the actress Georgina Roberts, a lady with a vocal range of several octaves and, like Bette, very good at engaging the audience. In fact there were plenty of subversive cross-dressing parallels with the Bourne event: most of the men in Lola's life, from royalty to chancers, were vividly impersonated by Fiona Putnam, and Fred subdued his macho flamenco persona to play 'Lolita'. Here's Roberts' Lola in extremis, with Ricardo in the background: 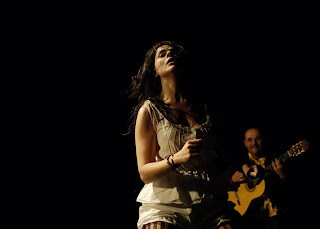 Julie, Ricardo's partner and manager whom I hadn't seen since student days, told us there was a late-night flamenco jazz event in the main Freemasons Hall above the basement venue for Lola. So, as the party had all but dissolved by 11pm, we persuaded our hosts and one of the guests to join us, parting company on the way at George Street with the most inspirational figure of my student days, albeit never my tutor, alas, Dr. Roger Savage, who directed me in a Kurt Weill triple bill and would have supervised my ph.D if I'd got my act together. How wonderful to see him again and be animated by his only-connectedness.

The second show found adaptable Ricardo in more flamboyant mode with a percussionist, a guy on synths and Fred, mostly accompanying until he took centre stage with a thrilling demo of flamenco fused with tongue-in-cheek hip-hop. Of course the shaking buttocks in red satin, which woke J from an exhausted kip, had nothing to do with our enjoyment...
Posted by David at 09:53

Yes, Alex, going up north was like heading into autumn - sometimes very lovely, though the solid day of rain I could have done without. Mind you, the same applies here today even if I sweated in the humidity when I got back.

Thanks for the picture of Dundas Street, David. In my time in Edinburgh doing my BMus and before at Napier I used to hurtle down Dundas Street to get to Stockbridge, being careful to turn left at the bottom of the hill. But I never got into Queen Street Gardens... "tsk!" as Pooh would say.

I had no idea you were tucked away in Nicholson Square (some time after I was there, I suspect - Jimmy MacM was before me and A Nicholson conducted our Weill triple bill).

Clearly you get as nostalgic for Auld Reekie in the right light as I do. Who wouldn't? And this time I thought it had got even better.

Were you at/did you hear any of the Jurowski/Aimard etc blockbuster tonight? Stunning good sense, all came together where I least expected it to...but more of that when I can.

from Peter Stephenson
I always enjoy reading your blog (I was a student of yours twenty-odd years ago when you were a lecturer at City Lit). I am amazed at the energy you have for musical/cultural pursuits - I'm afraid to say I get pretty saturated after one or two concerts in a week, but I AM a late starter.
My question is: who is J whom you keep mentioning? Is this your secretary, or perhaps personal assistant? J appears and disappears in your blog, yet we never learn anything about him or her. May we be further informed?
Best wishes
Peter M Stephenson

Gosh, Peter, you are curious, aren't you - first the godchildren (that was you, right?) and now the 'J'. Long-term readers will know that the 'J' is also known as the 'diplo-mate', aka my partner of the last 21 years (three of them as civil partner).

Though anything but closety, he prefers as much anonymity as I'm able to give him, so that will do.

This is the appropriate entry to mention, though, that our relationship began in Edinburgh, singing together in a fringe-of-fringe production of Puccini's Gianni Schicchi. So it was wonderful to be in that most beautiful of cities just before the 21st anniversary.