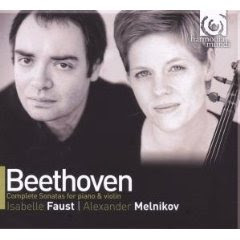 ...that has such artists in it. And such old things - by which I mean bloody masterpieces - still to hear and take on board. Oh dear, the exalted tone of David Robertson's Proms Last Night speech must have rubbed off on me. But that's the way I feel after last night's experience with the Razumovsky Ensemble and about the days before steeped in the ten Beethoven 'sonatas for fortepiano and violin' so that I could write a note of some new-found authority for Aldeburgh. How lucky I was that this new Harmonia Mundi release by two of the most challenging performers in the whole musical world coincided. Since I don't have the good fortune of reviewing the discs - Misha Donat's enthusiasm in the October BBC Music Magazine put me on to the set - there's a little luxury in being able to talk about both the works and the performances here.

I simply can't imagine a better way of getting to know these pieces than in the endlessly inventive hands of Isabelle Faust and Alexander Melnikov. The lovely lady has a world-class career, but how many people know Melnikov really is up to the Richter mark for imagination, pianistic colour and sheer intellectual liveliness? I'd borrowed the David Oistrakh/Lev Oborin set before this came along, and how middle-of-the-road it sounds by comparison. If you wondered whether this new duo is for you, you'd only have to listen to the 'minute scherzo' of the 'Spring' Sonata to see what they do in terms of accents, varying dynamics in repeats and just sheer elan. They're not afraid to elaborate repeats, either, as Beethoven and his fat friend Schuppanzigh undoubtedly did.

There were revelations for me right from the first in the sequence. I've always had my problems with Beethoven; an astrologically minded friend tells me it's because as probing Sagittarius he's the opposite sign to my flitting Gemini and, well, bearing in mind the number of Geminis I adore, not least Strauss, Stravinsky and Elgar, the irrational side of me is inclined to believe it. I put myself through noting all the quartets and interviewing the Borodins about them several years ago because I just couldn't otherwise imagine getting to grips with the weird imagination of the later works. I still don't understand some of those endless slow movements. But I'm glad I tried. And the journey through the sonatas has been similarly revelatory.

People always go for lyricism - hence the deserved popularity of the 'Spring' - and for grandeur of scale; thus the 'Kreutzer' is supposed to be the masterpiece. But there are others I love more: the very personal C minor Sonata at the heart of the Op. 30 sequence, and above all the transcendental pastoral of the Tenth Sonata's first movement. Always thinking, in a sentimental rather than a morbid way, of music that will touch the souls of the guests at my funeral, I'd cite this as my latest fancy (the final transformation of Strauss's Daphne remains a constant, since I hope to become a tree, too - though a copper beech rather than a boring laurel). Just ordered up the Oistrakh/Richter performance for further enlightenment, but I can't imagine it replacing Faust/Melnikov in my heart. 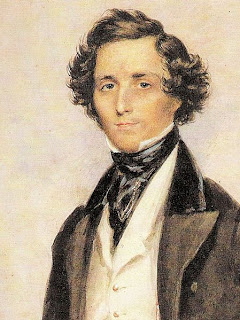 Now I can add a key Mendelssohn chamber work to the list of newly-beloveds. Spirits soared last night at the Wigmore the minute Alexander Sitkovetsky, Razumovsky Ensemble founder Oleg Kogan and friends plunged full-bloodedly into the Second, Op. 87. String Quintet. If the truth be told, I'd come to hear a string quartet arrangement of Prokofiev's Visions fugitives, only to find it had vanished from the programme. But I bet SSP would have been delighted to be supplanted by the contemporary he most admired, Ravel, whose Sonata for violin and cello the two stars put across with acid frolicking.

Had a feeling a Vivaldi Four Seasons with seven players would be something extraordinary. It was electrifying. Here there was an extra animateur in the beaming harpsichordist Naoki Kitaya and double-bass thunder and ricocheting from the astounding Stacey Watton. I don't think I've ever heard the ubiquitous stagioni live, and probably haven't listened to it since dipping into Nigel's quirky take. It's alive, of course, from first to last. And never more so than in the Razumovskys' ferocious encore reprise of the summer storm. We had no hesitation in rising to our feet, but what does it take for a British audience to follow suit? In America they stand for any old rubbish (including a not very good Flower Drum Song we saw on Broadway).

Was there anything missing? Well, I didn't spot Ida Haendel, the doyenne of old-school violinists who's the honorary patron of the Rasumovsky Academy scheme for young musicians. Anyone see her in a TV documentary sighing over and chastising the wrong-headed cockiness of that teenage composer? I was hoping to press the flesh so I could say I was one degree of separation away from Enescu and various other legends. But the lady is a legend herself, of course, and dresses rather nattily for someone somewhere in her eighties (exactly where she apparently won't reveal). Let's catch some of the fashions in pix from the Razumovsky Academy and Ensemble website: with Sitkovetsky 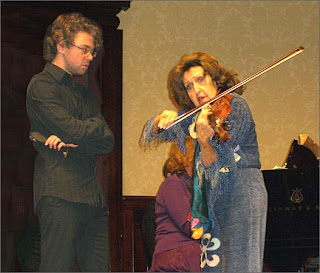 with another of yesterday evening's violinists, Anna-Liisa Bezrodny 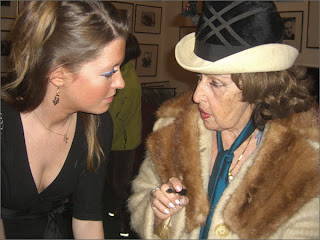 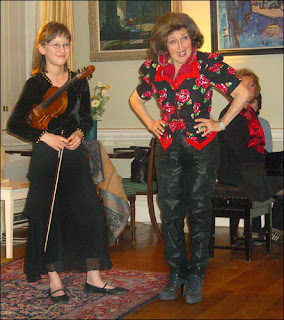 What a dame! You can catch her masterclasses later this month.

In the meantime the Rachmaninoff Society (they insist on the Anglo-Gallic transliteration, as do Boosey's with 'Prokofieff') would like me to publicise what looks to be a fascinating weekend in Manchester with various distinguished pianists and a few talkers including myself. I'll confess I'm a little sad to be missing the Jurowski Mahler Resurrection as the weekend kicks off on Friday 25 September, but it should be fun. I was going to sound forth on the art of the transcription, but as most of those have vanished from the recital programmes, I'm sticking with Rachmaninov and Tchaikovsky, who so admired the young man's music. 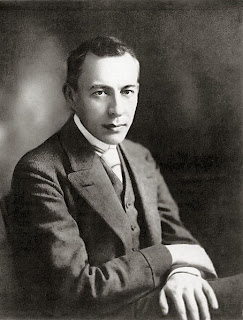 Sergey Vasilyevich, of course, never ceased to return the compliment.

Further details of the weekend from the Society's website.
Posted by David at 13:11

Such outfits! Is that what one of your blogging colleagues might call 'being a camp old bird'?

Love the Rosenkav ref, though.