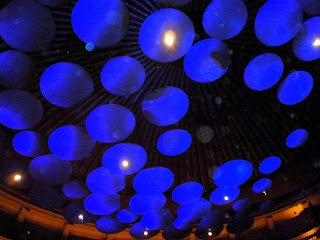 They may look like plankton at the bottom of the ocean, but it's only the inescapable Albert Hall acoustic mushrooms bathed in a blue light for Friday's Late Night Prom, as was the entire platform for a performance of George Crumb's Vox balaenae (Voice of the Whale). More light and context, please: 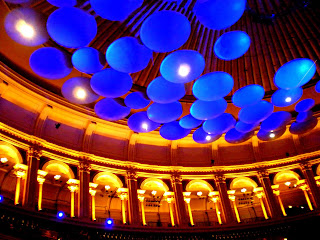 Vox balaenae was the only one of the American genius's works I'd heard live before, in an Aldeburgh Church performance which made Thomas Ades's Trio pale by comparison. An electric flute makes whale noises, complemented by electric cello and an amplified piano which acts as bedrock. A 'sea-nocturne' provides the benediction and coming-together. And this cathartic final-blessing effect was equally true of the two other Crumb pieces in the Prom. All three were written between 1969 and 1971. Stargazer George is 80 this year, and has never believed in churning it out. 'I don't think it's a good thing to create less than good music in a world that's full of a lot of indifferent music', he says. How wise. Here he is in the first of his wonderyears, 1967, posing with the score of his Pulitzer Prize-winner (photo courtesy of the Crumb family via the BBC): 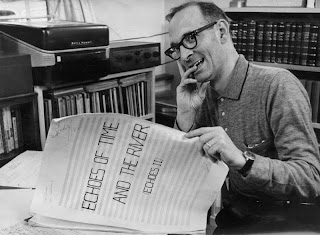 This one's more recent, of GC standing in what looks to me like a Danish town, though I may be wrong (any more information about this and whom to credit gratefully received): 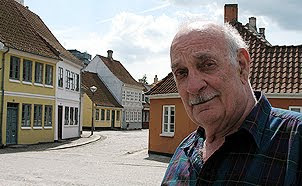 First at the late night Prom we had Night of the Four Moons. Our friend the majestic Hilary Summers, that rare bird the true contralto, ranged wide in the Lorca settings before joining Nash Ensemble flautist Philippa Davies, banjo player Steve Smith and vibraphonist Chris Brannick somewhere in the recesses of the Albert Hall for the simplest of Berceuses while that best of cellists Paul Watkins was left onstage to sound what Crumb calls the 'music of the spheres'. Very much of the essence, and how these wonderful soloists, two of them joined by the quiet mastery of Ian Brown in the whale music, honoured the careful writing Crumb allocates to each.

Equally moving was the last of more Lorca settings in Ancient Voices of Children, conducted along with Four Moons by Diego Masson. Another great soloist to add to the mix, oboist Gareth Hulse; another extraordinary vocalist, Claire Booth, working wonders on the Spanish; and even the soprano deputed to take the role of a treble, Amy Howarth, did a great job. There weren't many of us in the hall to succumb to the spell, but succumb I think we all did. Don't miss the BBC Symphony's Crumb 'Total Immersion' day at the Barbican on 5 December.

Sensitive connections of the Crumb song-cycles to Mahler's Kindertotenlieder in the evening's earlier Prom would have been more potent if only Matthias Goerne hadn't been such a bitter disappointment, to me at any rate. I was expecting tear-jerking, hallowed wonders from the baritone whose German songs discs (if not his rather soft-edged Wozzeck) had impressed me so much.

But what did we get? Occluded tone, faulty technique mirrored in bizarre stage swaying as awkward as Bostridge's, and as in his case hampering rather than assisting expression. The first dismay came with how in the first song he failed to take that ineffable phrase 'Als sei kein Ungluck die Nacht gescheh'n' and its counterparts over the top. I can't help hearing La Baker in this, but I did just turn back to Quasthoff to hear how it ought to work in a man's voice. And I don't care, this is my blog and not a newspaper, so I can say what I like and you can think it partisan or objective as you please: J's performance in Trebbio a couple of years ago, albeit with piano accompaniment by the inestimable Kurt Ryz, was a hundred times better than Goerne's. On Friday night I sat down in the arena halfway through and only tuned in again when the horns and the trombones spread balm at the very end.

Let's face it, though, this Prom belonged to Jonathan Nott and the extraordinary results he drew from the Gustav Mahler Youth Orchestra. I didn't need to raise questions of the EUYO's age in the last blog entry, nor do I with the GMYO. It still has invaluabe output from its founder, our adored Claudio Abbado, and in the October issue of the BBC Music Magazine you'll find I've just sprinkled five stars over every category for their filmed concert together of Mahler's Fourth Symphony and Schoenberg's Pelleas und Melisande. 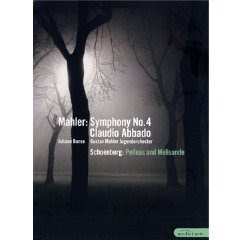 Abbado, I bet, would be jolly proud of Nott's work if he tuned in for the televised prom or the Radio 3 broadcast (as he still can, of course, for the next six days). Ligeti's Atmospheres, haloed in the capricious colosseum, was as compelling a performance as any I've heard in this Proms season, even if it didn't segue into the Mahler as Jurowski's performance last year did into the bassoon solo of Stravinsky's Rite of Spring. Some of us were a little too discombobulated by Goerne to enter the world of Schoenberg's Five Orchestral Pieces, but those too the GMYO played as to the manner born, with superb solos in the second movement. 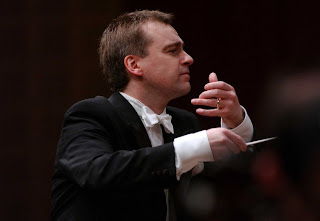 What, for me, signalled that Nott is up there among the dense constellation of young and youngish conductors currently dazzling us was his no-foot-wrong interpretation of Strauss's Also sprach Zarathustra. The following-through and rounding-off of phrases in his clear direction, a trait he shares with Jurowski, negotiated all the potential difficulties. And there were sounds I've never heard from any orchestra live in this work: the specific tone of the double-basses in the twelve-note fugue representing science's hampering effect, the fire-spitting of its rapid counterpart, the sheer joy in a tuning-perfect waltz solo from leader Carolina Kurkowski Perez. OK, so the GMYO violins soaring in ecstasy can't quite mimic the Berlin Phil, but still, Nott's phrasing helped them enormously.

The Albert Hall once again played its luminous part in reminding us that this is an astonishing piece for any age, but especially for the 1890s when it first hit the world; little wonder if the young Bartok firmed up his composing resolve after hearing a performance.
Posted by David at 12:48

I agree, Nott is a major talent. Have you heard his Mahler Ninth yet?

Review is in the October BBCMM. I thought it was the best in the cycle so far - bearing in mind the symphony it would have to be - and I should stress it's really quite something to be in the front line near Abbado and Bernstein.

The only problem, even though I know comparisons are invidious, is that I can never help hearing Berlin, Amsterdam or Vienna strings and setting the Bambergers alongside them. Even there, as with the GMYO, Nott has trained them to the very highest level of phrasing and body.

The George Crumb photo you ask about was taken in June 2007, outside of the Carl Nielsen Hall, in Odense Denmark. The photographer was my wife, Becky Starobin.

Ah, thank you, and congratulations, David (if I may), on your film and your part in the unforgettable Saturday (write-ups of which I've sure you've seen here and on www.theartsdesk.com). I wish I'd troubled the great man enough to shake his hand (and ask him to sign my score of Star-Child).

Send him all my warmest and tell him we all want a record of that marvellous performance of Ancient Voices at the Barbican.