Along the road to learn... 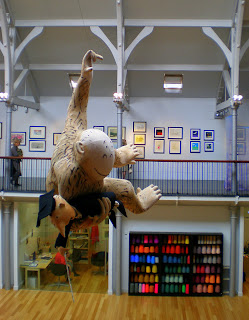 ...John Patrick Norman McHennessy, the boy who was always late, met with seemingly insuperable obstacles and a rewarding denouement. I don't think it's giving too much away to say that the figures dangling above provide the punchline, which made me laugh out loud when I got to that point in this little masterpiece. 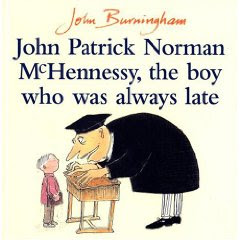 The figures are suspended from the ceiling of the Dovecot, a splendid conversion of the Edinburgh Royal Infirmary Baths which I remember so well in their original incarnation. Gorilla and schoolmaster form one centrepiece of an alas now concluded exhibition which I loved to bits, Mr Gumpy and other outings - Celebrating 50 years of John Burningham's work. This is the other, a canvas of the dancing religious leaders from Whadayamean, beneath which I'm sitting on the comfy sofa kindly proffered as a resting-place at the exhibition's mid-point and waiting to read select items in the library of books equally thoughtfully provided. 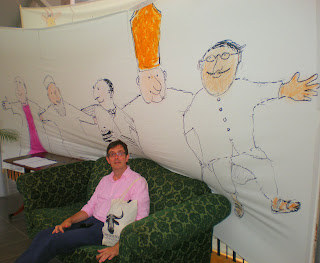 It was the only art-outing of our flying visit to the Edinburgh Festival - unless you count two minutes whizzing irritatedly around the late Eva Hesse's crumpled 'test-pieces' at the Fruitmarket Gallery before heading for the ace cafe. The Spanish spectacular Ruth convinced us to give a miss, and Burningham we only discovered because our hostess Caroline recommended that we had a look at what had been done at the Dovecot, which is primarily a home for weaving in an attempt to make Edinburgh even more of a crafts city than it was before.

Did I know Burningham's work before? Only vaguely - I think I may have been shown Avocado Baby, the charming tale based on Burningham's own experience of rearing an eczema-prone child on avocados and finding it gave her extraordinary strength (the baby in the book hurls burglars downstairs). Yet like other artists whose work is primarily illustrative - Bawden, Ravilious, Sendak - Burningham's art deserves setting apart on wallspace in an exhibition, here all around the upper gallery of the weaving centre.

In the 1960s he did some striking posters for London Transport, kicking off his love of landscape which he says he could always keep complex while the figures and their narrative became simpler in his children's books. Apparently he was feted for illustrating Ian Fleming's Chitty Chitty Bang Bang - his own flying car has as much idiosyncrasy as the one in the very different film (and forgive the flash, but it adds an Icarus-near-the-sun quality, don't you think) - 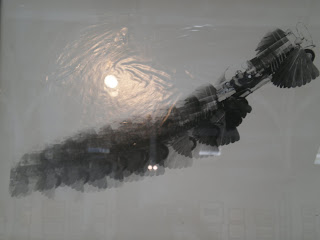 but also created, with his own pithy prose, Borka the goose with no feathers, Trubloff the balalaika-playing mouse, Canonball Simp the circus dog and Mr Gumpy among many. I reckon Troubloff especially, and probably several others, would make the perfect subject for a children's opera along the lines of those the Finns have been commissioning as inspired by Mauri Kunnas's dog-oriented epics (I'm thinking about this a lot because I've at long last been able to write up my trip to Savonlinna for the BBC Music Magazine).

Now Jonathan Cape have done Burningham proud with a beautifully-presented monograph (text, again, by Burningham himself in the form of autobiography). 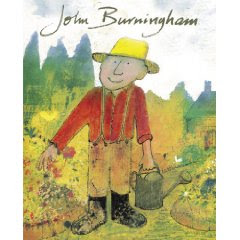 I took delivery of a copy today and I reckon it's one of the few big picture books where I'll devour every word as well as every image. Hearty congratulations on your 50 fabulous (in the original sense) years, Mr. Burningham! I wish I'd got to know you earlier.

Why, I wonder, has this entry called up a Google ad for 'one tip of [sic] a flat belly'? Could Avocado Baby have summoned it? Others have been more pertinent...
Posted by David at 13:28

What fun! I'm tempted to go out and get some of his books immediately.