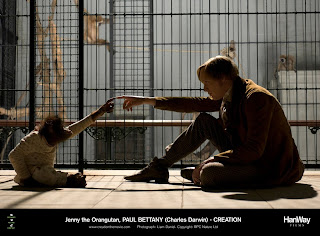 Far from it. Creation, Jon Amiel's new film about Darwin which we had the moving privilege of previewing at the BFI Southbank in the company of its makers on Tuesday, is a serious, introspective meditation on all the big issues: not just the obvious Darwinian bedrock but also mortality, the rifts and healings of the closest human relationships, nature versus religion. And if that suggests a sententious mix, again, far from it: the beautifully structured script hovers delicately around three tales told by father Darwin to various children.

My own romantic theory is that the filmmakers started out hoping to make a popular film about a difficult subject, probably decided in some way that the loss of a child was a bigger strand than they thought it was, and ended up with something much more personal. I'm not spoiling your pleasure by saying that the central issue is about the death of Darwin's brightest and best-loved daughter Annie; that's tactfully established by the placing of a photograph minutes into the film. So much for the publicity's attempts to convince us that this is 'part ghost story, part psychological thriller'.

The fact that child-death was much more a fact of life before the 20th century doesn't stop it touching most of us in some way or another. One of the hardest things I've ever done was to accompany J in the Schubert Wiegenlied at the funeral of six-month old 'Hornblower' Peter. Thank God it was early on in the service, before the speeches. The film's dedication to the young victims of post-viral complications in the credits indicates a personal involvement here, too.

Darwin's ethical struggle with whether or not to write and publish The Origin of Species - choice selection of text accompanying dazzling images makes me want to read it - proceeds alongside the traumatic grieving period needed to lay Annie to rest. To match the film's cinematographic beauties and verbal discretion, they've cast the compelling Paul Bettany as a troubled but humorous Darwin who wins our sympathies right at the start. It's a painfully sensitive performance, every flicker of an eyelid and movement of the mouth caught in relentless close-up. And yes, it brought tears to my eyes, sometimes when I least expected: there's a calm, restrained sequence where Darwin prays to God to spare Annie's life and take his own. Martha West plays Annie with a luminous, knowing but never arch demeanour. 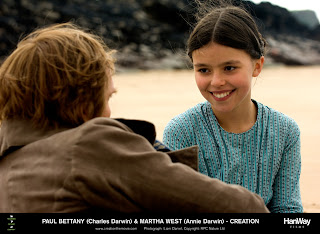 Some of the viewers, I know, found Jennifer Connelly's restraint as Darwin's wife the most moving, though I was sometimes less convinced - albeit not in the Strindbergian later conflicts. She has such a handsome, haunting Victorian face, too. 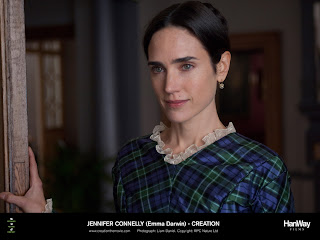 And the monkey business? Well, I defy you not to weep at orang-utan Jenny's fate. For more before the film opens in London next week, do take a look at the exquisitely designed Creation website.

Perhaps this is the place to mention briefly a book I've wanted to enthuse over for months, Darian Leader's study of mourning and depression. 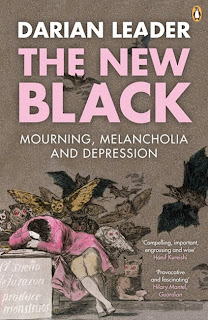 There are so many thought-provoking ideas in Leader's prose, worthy of Freud himself in its clarity - there were only two passages I had to read again to understand - and he's never prescriptive about how or when we ought to mourn properly.

Why, though, would the book be of universal appeal? Chiefly because of the historical and social perspectives: Leader suggests that the multitudinous deaths of the First World War put pay to the grieving process so ritualised by the Victorians. He's also fascinating on our need for ghosts and vampires, creations of that purgatorial phase between the actual death and the deeper one when we've convinced ourselves that the person has, after all, finally gone.

And now for something absurdly different. Last night, the first at home for ages, at least without work to do, we saw the perfect film for our mood: Vittorio de Sica's Yesterday, Today and Tomorrow. 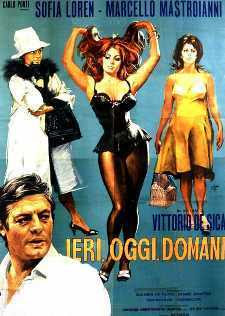 If the original poster suggests the kind of tacky sex comedy the Brits and Americans were making in the early 1960s, that's misleading. In fact the film might be subtitled, as is the poster on the wall of Matt Lucas's Little Britain impresario, Sex Please, We're Not British.There's a healthy attitude to the naturalness of sex here which must have been rather amazing in 1963 (though of course Bergman and the French had already been at it, so to speak, for decades). It's enshrined in what one observer has called 'the greatest comic couple of all time', Sophia Loren and Marcello Mastroianni. Much as I love the very different rapier wit of Hepburn and Tracey, I think he may be right, at least as far as the erotic dimension is concerned.

I had no idea when we started watching that this was going to be a trilogy, with our stars playing three very different couples. The first little comedy is about the necessity of making babies in Naples, whose streets and people are very much the not too sentimental heart of the drama. The second, a car journey with a spoilt rich beauty and her lover, looks as if it might be rather naff until you quickly reach the punchline. In the last, the Italian dialogue between sex and religion is singularly encapsulated, and Mastroianni reveals his full comic genius.

Loren is believable and bewitching throughout and yes, she does have a gorgeous figure when she finally starts to take her clothes off, but is that the point? Not for me, but it might well be for any full-blooded heterosexuals out there. Anyway the literary input, from De Filippo and Moravia among others, is rather classy, and what a joy to see an Italian film where the voices aren't dubbed, which I find so offputting in all of Fellini's masterpieces.
Posted by David at 10:28

For what it is worth, I am personally a firm creationist, believing that the opening chapters of _Genesis_ say what they mean and mean what they say.

Well. The film distributor told me that creationists had been giving the film a hard time. I don't know whether this might be a ploy to geneate publicity but if it's true, that's a pity. The film only tries to give a complex portrait of a scientist who was also, clearly, a rather marvellous human being.

Darwin's wife and her faith are also treated very sympathetically. As I said, one of the most moving moments is his prayer to God.

I would have to agree that Creationists should not be doing things like that just for publicity, just as I do not believe that Pro-Lifers should go around bombing abortion clinics and the like. Those sorts of things just put blights on what I believe are important causes.

Actually I meant that it might be a filmmakers' ploy rather than one from the creationists. But to condemn the film without having seen it would be like putting out a fatwa on the Satanic Verses unread (and how many Muslims, in fact how many of us anywhere, could claim to have got to grips with that?)

Could I urge everyone, in the bowels of Christ, NOT to watch any fictional account of real events and people? Darwin is an essential figure in the world even 150 years after his death, and it is crucial not to cloud the mind with false images. Thus, his wife's views did indeed influence Darwin's behaviour in the extension of his theories to religion, and the argument about this will be corrupted by having in one's mind images of the wife from a film made by someone who can care nothing for truth, only for making a good film.

It is hard enough to keep a grip on reality from the real evidence, in so far as that can be discerned though the fog of the media old and new, without perverting the mind with such disgraceful prostitutions of the truth as this, or The Queen, or The Representative, or George III etc etc etc. Does anyone care?

Like I said re the creationists and the fatwaists, never judge a work of art until you've seen it. I know your point of view, Mr Damant, but it jars with the sensitivity of the film.

The better the film,as a film, the stronger my argument.

No work of art whould be created using real events.

The best way to read On the Origen of Species is in the edition edited by Joseph Carroll (Broadview 2003). The OoS is beautifully written, partly no doubt as a result of the fifteen years it was held in the wings, during which period the text was refined and focussed. Also there is a considerable set of extracts from other works by Darwin and from others who intervened in the debate, one way or another. ( I like Huxley's remark that the idea of natural selection was so obvious that one felt a bit stupid for not having thought of it oneself). For those interested in truth, strongly to be recommended

I shall certainly follow your advice, though I suppose it's far too much to hope that you will follow mine and go and see the film...