In praise of shadows 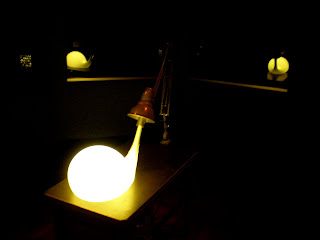 I can't think of a better title than the one already given to this small-scale but beguiling exhibition, consigned to the treasure-house basement of the Victoria and Albert Museum as part of the London Design Festival. I thought I only had a few days to draw it to your attention, but I've just heard it's been extended for another week, until Sunday 4 October. Even so, I want to get this up and running even though Martinu, Rachmaninov and Tchaikovsky are all crying out for major attention.

In praise of shadows is a showcase for new European lighting design exploiting alternative low-energy sources, coinciding with the EU directive to phase out low-efficiency light bulbs by 2012. If that sounds worthy but a little dull, it's not, chiefly because the designs are installed in some of the V&A's most delightful but least visited galleries, normally closed awaiting refurbishment but with plenty of gems of European furniture from the 17th and 18th centuries.

It's the juxtaposition that especially fascinates, given that you go in with a wind-up torch and illuminate dark corners - a Chinese vase here, a ram's head there. Several of the new lights are outstanding, though. The first room, shown at the top, presents the UK's 'W08', advertised as 'a modern take on the classic Anglepoise lamp' using 'simple, honest materials', and Pieke Bergmans's 'Light Blub' from the Netherlands.

I could live with the 'solar lampions' of another Netherlands-based designer, Damian O'Sullivan, Chinese lanterns to go with the vases that also look to me like Indian tablas. 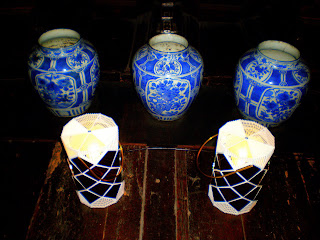 The Dutch continue to lead the way with 'Fragile Future' by Lonneke Gordijn and Ralph Nauta, a light sculpture 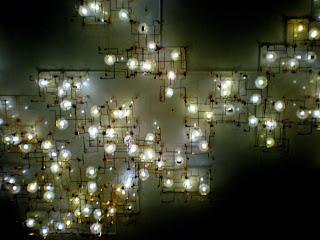 made up of real dandelion seed heads (how do they stay on? Are they glued individually?) 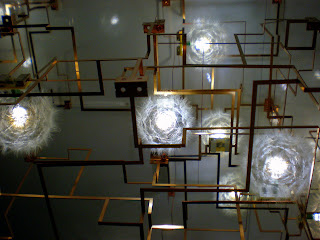 while Poland's Puff-Buff Design gives us a Queen's Chandelier made of PVC pockets with LEDs inside. Looks heavy, feels light. 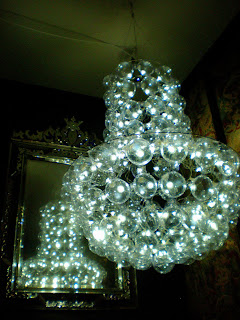 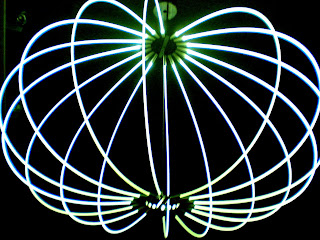 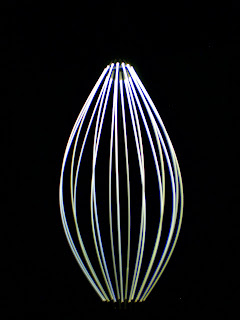 And finally you reach a real showpiece from Rachel Wingfield and Austrian Mathias Gmachl. Sonumbra is a parasol by day which lights up at night from energy collected in its solar cells. 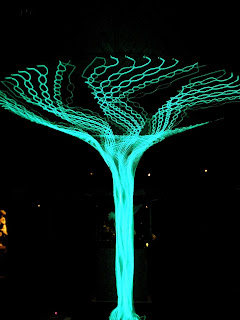 Kids would especially enjoy this, the Medusa and going around in the dark with their torches - and they'd learn something very up to the minute into the bargain.

All this comes thanks to EUNIC, the European Commission in the UK and the excellent work of curator Jane Withers. We swanned around the Sculpture Gallery on Monday evening, sloping off to the exhibition downstairs and out into the courtyard to look at the Wallpaper*-commissioned Chair Arch, reflecting the one constructed in 1877 for Queen Victoria's visit to High Wycombe. 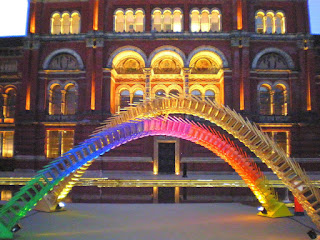 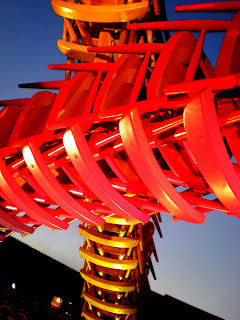 If the human shadow is the symbol of the soul, there wasn't much of it to praise in Bernard Haitink's second Festival Hall concert with the Chicago Symphony Orchestra last night. 'A dose of the boring Bernards', as Martin Hoyle used to say in Time Out, isn't quite fair: Haitink is too vigilant and musicianly to let anything torpid pass muster. He knows exactly how to shape climaxes, master the long line and give his players their head. But I did find the CSO's Haydn 'Clock' Symphony awfully humourless. OK, so the players and the conductor don't have to smile - personally I feel it helps - but if nobody in the audience does either, then part of the enterprise has failed. Haydn was so young at heart when he wrote this; Sir Charles Mackerras, about Haitink's age, is too; but Sir Bernard does seem to be going through the motions these days. That wasn't true of his Concertgebouw Beethoven Seven earlier this year, but it happened in routine Brahms Second and Third symphonies with the LSO, and it happened here too.

Bruckner Seven did finally win me over. I find the Chicago string sound dead behind the eyes, always have done in live performance, but when it's a question of volume - first movement crescendo-coda - and speed, things improve, and so the finale really was rather special and uniquely convincing. My pal Ed Seckerson found the Wagner tubas' tuning very problematic, but you have to allow for it, I reckon, and they did redeem themselves handsomely at the end of Bruckner's adagio homage to the master. Still, players did look so bored when they had nothing to do. You could hardly blame the cymbalist and triangle player in that respect; and of course Haitink could have let them off their one chance to shine, as Bruckner is supposed originally to have done, if he'd been so inclined. They didn't even get a shot at a noisy encore.

Still, obligatory (if not for me) standing ovation notwithstanding, this was hardly the kind of passionate, communicative music-making I've been experiencing with the Rasumovsky Ensemble, the Faust/Melnikov Beethoven sonatas or most of the Czechs I've been listening to in Martinu Four. A swift return to the Festival Hall this morning as I can't catch Vladimir Jurowski's live Mahler Resurrections tonight or tomorrow put it all right again.

I can't reveal anything more until the London Philharmonic admin, reasonably enough, check over what I might have to say about a private rehearsal, so I'll just throw in a couple of well-worn but apt adjectives - 'fresh' and 'revelatory' - and leave you with a couple of minutes of the ever-alert Jurowski drawing the 'Spielmann' movement of Mahler's Das klagende Lied to a close at the start of his LPO tenure. There's light and shade, there's engagement for you.

*their asterisk, not mine. Couldn't be bothered to find out what that's all about.
Posted by David at 16:51

Dear Mr Nice
I was interested to read in one of your previous blogs of the Tridentine Requiem Mass(presumably 1962 missal) being said, in Edinburgh, in memory of the last true monarch of England and Scotland, Charles Edward Stuart, buried in the Vatican. David Damant emailed to deny this claim of legitimacy. But I have by chance attended a Reqiuem Mass in the Old Rite said at StNicholas de Chardonnet in Paris in memory of the Plantagenet Richard III, "last true monarch of England", whose death at the Battle of Bosworth Field in 1485 allowed the usurping Tudors, hitherto sheepfarmers, to steal the throne of England. What has David Damant to say about that?
Sincerely
Catherine Nixon
Clare College, Cambridge.

From David Damant
I think that my comment must have been that, according to Iain Moncieffe of that Ilk, who was not so much an authority on such matters as the overwhelming authority, the Stuart heir of Charles James Stuart was George III, so that the present Stuart heir is Elizabeth II and not the Duke of Bavaria. See the Wikipedia for the Jacobite Succession.

In any case it was highly desirable to get rid of that fatuous dynasty the Stuarts, who were, from Mary Queen of Scots to the Young Pretender, useless and silly as head of government. The possible exception, Charles II, only behaved himself since he did not want to go on his travels again. Thank goodness Catherine of Braganza was sterile. Compare the skills of the Tudors

The Tudors were indeed an upstart house but far from being sheep farmers they married a princess from France, the widow of Henry V, who was Henry VII's grandmother

Still it was a pity that the Plantagenets became extinct. " For where is Bohun? Where is Mowbray? Where is Mortimer? Nay, and what is more and most of all, where is Plantagenet? They are entombed in the urns and sepulcres of mortality."

In fact the Dukes of Beaufort are Plantagenets in the male line and, though this is through two illegitimate links, they are therefore quite posh

In praise of shadows, indeed, if not the ones I had in mind. But beautifully put, the both of you.