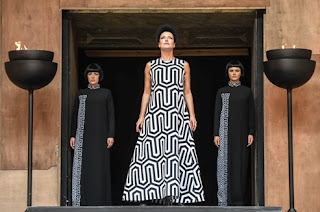 A false Oresteia is one like Robert Icke's at the Almeida, now transferred to the Trafalgar Studios - rejecting any attempt to translate Aeschylus' tough, dynamic language and setting itself an extra problem in its contemporary setting by starting with the sacrifice of Iphigenia. Magnificent and thrilling as was Lia Williams' performance, you can't slant it all in favour of Clytemnestra; Athena as much as Apollo  would be dismayed by that, and the Furies would have too much of a part in civic life.

That there can be a civic life after all that atavistic blood-grudge saga is one of the things that has to fill one with wonder at this oldest of great dramas. Rory Mullarkey makes sure it takes its rightful place in a version which is only an adaptation in that it allows Agamemnon, Choephoroe and Eumenides to be performed in a single evening - in other words, halving the text but keeping the essence of every speech. 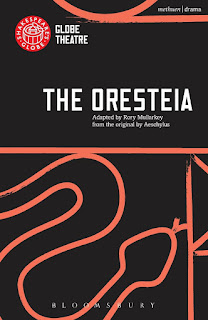 Although Mullarkey only studied ancient Greek for a year at school - which sets him at a disadvantage alongside the fabulous Anne Carson, whose Bakkhai in the only faithful-to-the-playwright staging of the Almeida's admirable Greek season was one of the best translations-in-action I've ever encountered, at least where I know the original - he seemed to me to get to the tough heart of the poetry. And I say this as a huge admirer of Tony Harrison's version for the classic National Theatre Oresteia directed by Peter Hall. Mullarkey talks total sense in the programme interview with Heather Neill:

Aeschylus is full of craggy verbal soundscapes, big, chunky language [complex, too - it was a killer to study in the original at university]. It felt necessary to try to capture some of that. Certain writers in English seemed influenced by Aeschylus and I glutted myself with them as I was working on it - Joyce, Shelley, Gerald Manley Hopkins, Allen Ginsberg, Ted Hughes. There's something in the elemental nature of that language, the way the words sing in the air. Later Shakespeare too: the complexity of Leontes' language in The Winter's Tale has something of that muscularity.

If only Icke, and Rachel Cusk in her so-called Medea also at the Almeida, had tried to come up with a contemporary equivalent of 'the way the words sing in the air'. But this kind of verse also needs intelligent, powerful delivery and, by Zeus, it got it in the two key performances. 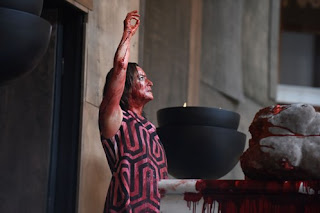 Katy Stephens as Clytemnestra was all artful command and undercutting irony when she first appeared in a dress of fabulous design by Hannah Clark (top image; all pictures by Robert Day for Shakespeare's Globe). Those raised, sculptured arms, oh my, and that force in the crucial confrontation with son Orestes, which was the first point at which I really got a lump in my throat. 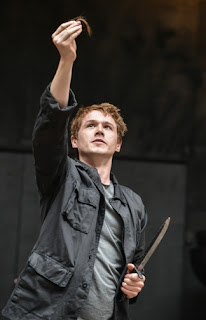 I'm possibly bound to be a bit biased in favour of Joel MacCormack since I regard him as something of a protégé since he participated - entirely on the shrewd instigation of Harriet Walter - in the Hofmannsthal readings as part of the German Opera Discovery Day I curated in Birmingham. There he played a sensitive, almost feminine Octavian and an ardent Composer (in the scene with Zerbinetta, excellently played by Daisy Boulton, culled from the original Bürger als Edelmann backstage scene linking to the operatic Ariadne). Orestes was, on the other hand, going to ask for blood and he delivered it, nervous, volatile and ultimately assured, speaking Mullarkey's pure poetry beautifully. I'd travel to hear his Hamlet, a role he must play soon. Though the Orestes in the Almeida Oresteia wasn't bad,  I've forgotten him already; I'll remember this one, and not just because I know the guy. 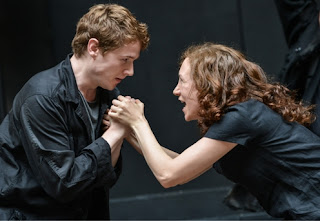 Electra is more marginal in Aeschylus than she is in Sophocles or Euripides, but I thought Rosie Hilal could have been a bit dirtier of voice and appearance. Still, sparks flew between her and MacCormack.

Elsewhere the acting was variable but never less than concentrated - I was never bored or distracted. Naana Agyei-Ampedu (pictured below with George Irving as Agamemnon) as the spat-upon 'barbarian' Cassandra spoke powerfully, but her words couldn't be made out when she sang. 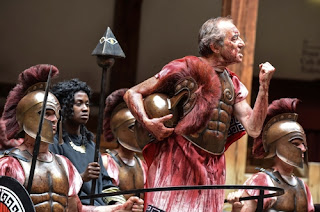 The sung parts, in fact, were the least impressive part of Mira Calix's often just-right score - not on a level, inevitably, with the extraordinary complexity of Orlando Gough's choruses in the Almeida Bakkhai. But these ones made their point above all in the ritual screwing-up of courage to the sticking-point at the heart of Choephoroe. 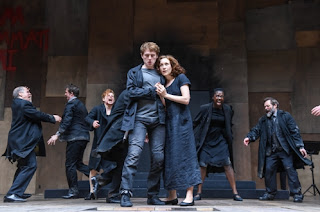 Horn, clarinet and saxophone players came down from their box to participate at this point. I liked it that there was no percussion other than what we got from the electronics, much as I miss one of Birtwistle's greatest achievements in his score for the National (unforgettable the shrieking clarinets for Cassandra).

It's difficult to know who was who in the various choruses, though I was especially impressed by the metaphor of the ravening lion devouring an entire household, and the zombie Erinyes, only just a little bit comic, spoke well, too (which actress is this below?). 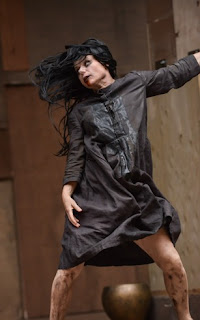 Still not sure why Adele Thomas' ancient-versus-modern production had the chorus in the first and last plays dressed in what looked like grey-black post-Second-World-War garb, and there was sometimes a home-made look about the presentation, but Clark's costumes usually came to the rescue.

The final Globe jig around an enormous gold phallus was well earned, a cathartic coda to a play which, whatever one may think about its patriarchal concessions, always surprises in its measured speeches after the horrors of the two before it. They'd sold out of Mullarkey's text in the shop, so I've ordered it up along with Anne Carson's proposal of a different Oresteia - Aeschylus' Agamemnon, Sophocles' Electra and Euripides' Orestes. Let my get my hands on a theatre and the right actors, and I'd be back in the director's chair like a shot for that one. Meanwhile, I hope someone reads this in time to rush to the Globe tonight for the last performance. The beauty of it is you can still walk in and buy a £5 groundling ticket to see top quality acting up close and personal.
Posted by David at 16:02

David: It's been a while since I've read Anne Carson's "An Oresteia," but I recall being enthralled on a first read. (I don't have a basis for comparison, however, as you do, so I'll be particularly interested in your view.) Did you happen to see the Antigone using her translation? I would have loved to see that when it came to the US. I gather Binoche didn't get high marks either side of the Atlantic, but Anne Carson's translation was much admired.

No, Sue, I didn't see it, precisely because I'd seen Binoche in another show and didn't think she'd be up to Antigone (I've yet to see a good one). But then I wasn't familiar with Carson's amazing translations.

When young I considered that the Renaissance writers ( Shakespeare, Alberti) were modern and realistic, leaving behind the rather superstitious elements of the Greeks, as in the Furies, and in fate rolling forward ( the curse of the House of Atreus). "What a piece of work is a man, how noble in reason, how infinite in faculties, in form and moving how express and admirable. In action how like an angel, in apprehension how like a God. The beauty of the world, the paragon of animals" But now I see that the Greeks were right, and the Renaissance optimistic.... the dark forces described by the Greeks, even in apparently supernatural forms, are true descriptions of the dark forces in ourselves, and the dark forces of the crowds and nations we see around us. A chief example is the Islamic State and its offshoots, but seen also in so many events, such as in the hate without reason developed against strangers, the manic addiction to guns in the States. To understand the Greek tragedies is ( as Aristotle said) to purge the emotions with pity and fear, and to achieve a catharsis, which was perhaps reached to a degree in Western civilisation but is now eroded here by those who are not heirs of the Greeks, and around the world where such an influence has never existed

Yet the truly amazing aspect of the Oresteia, as I've tried to suggest above, is how the Athenian democratic court in Eumenides tries to incorporate the dark, atavistic side, the 'old gods', into its structure. That's what makes a more or less faithful rendering of the text, as opposed to a slanted adaptation, so valuable. The problematic aspect remains that Athena, as the daughter of Zeus, gives her deciding vote to the notion that a child is more tied to his father than his mother. But she doesn't let the Furies remain at large to wreak havoc on the land.

I agree with Rory Mullarkey that we live in a time almost as unstable and frightening as the one the Greeks knew. There is catharsis in Aeschylus, but very often not in Euripides, who thrives on dislocation. Thus Mullarkey in the interview: 'We live in a world which has become more confusing, abstracted than it has ever been. We see politics and economics taken further away from us. We feel dislocated from politics. What this play does, it brings war, foreign policy, the economy and distils them into a story about the only thing that is concrete: blood...Everything is constantly open for discussion.'