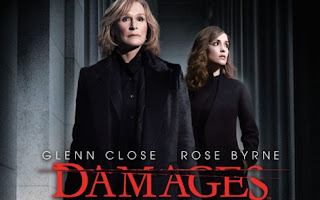 That’s Glenn and Rose as Patty Hewes and Ellen Parsons, dodgy old hand and incorruptible novice-who-grows. They make a magnificent double act in one of the best TV legal thrillers I’ve ever seen, if not the best. Yes, I’ve come late as usual to a classic American series, Damages, and we weren’t sure if we would stick to it after the first few episodes, where some of the characters (not least Ellen’s doomed boyfriend – and that’s not a spoiler owing to the singular shaping of each ‘season’) seemed seriously undercharacterised.There was also a distractingly, unintentionally funny attempt by Slovenian-American actor Željko Ivanek, compelling enough as the troubled Ray Fiske, to do a deep-south accent that lurched all over the place to English and Australian, among others.

Now I think Damages is the most skillfully plotted of crime dramas. Its structure has held good for the first four series: reveal something of the denouement at the start – which in the case of 1 and 3 means you know in episode one who’s going to get murdered  – but baffle your viewers as to how it got to that point. Of course I can’t say much more without giving essential details away, but I will say that I never guessed any of the details in the outcomes.

The brilliance of the scriptwriters is to keep so many strands in play before tying them more or less together. The masterpiece so far is Season 3, all about dysfunctional families. The central group under surveillance are the nearest and dearest of massive fraudster Louis Tobin (Len Cariou, creator of the role of Sondheim’s Sweeney Todd). Campbell Scott gives an incredibly nuanced performance as the son; you just don’t notice how a seemingly good man goes bad out of desperation. 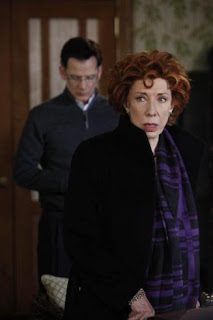 Lily Tomlin is his mother; the relatively small air time she occupies earns her a mention only in the closing credits as a 'special guest', but she’s central and compelling. The lawyer who thinks he’s family is also masterfully played by Martin Short. Kept in play with this are the dodgy behaviour of Ellen’s sister and Patty’s disastrous relationship with her only son.

There’s also the question hanging over the fate of the weak, vain demi-villain of the first series Arthur Frobisher, an amazingly good performance from Ted Danson which swings between making you laugh at the man’s cravenness and despise his corruption. 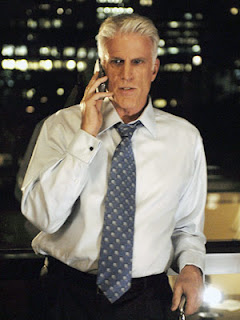 Series Three is consummate in swinging from pure comedy in the reintroduction of the Frobisher strain – there's been precious little humour in the first phase of Season One -  to the nastier side. And the upshot of the family tragedy is pure House of Atreus stuff. 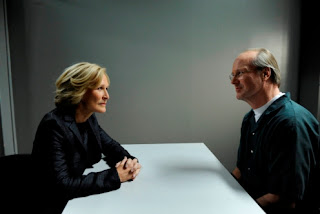 So strong performances flank the two leads (in Season Two William Hurt, pictured above with Close, was central; in Season Four John Goodman is one of the two nasties to get, though I’m less gripped so far*). Rose Byrne I thought at first was destined to play the pretty cipher, but the follow-up on her grief over her boyfriend’s murder and rage at who tried to kill her – no spoilers there – has her running a range of melancholy and tired expressions, and it’s no mean feat to make essential decency interesting. Working with the senior actress must have been a masterclass which certainly produced strong results. 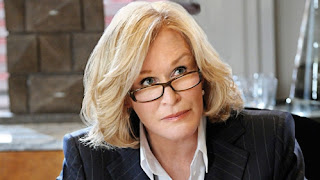 Close is so brilliant that you’re tempted to think she must be Patty Hewes, a woman of infinite complexity, a terrifying mixture of ice and red-hot rage, prepared to do bad to get good results. This is one of the great screen performances, no doubt, and it uses all the acting skills it takes to play a character you often can’t tell is acting. Would I go and see her next year in Sunset Boulevard at the Coli? Probably not, given that it's Lloyd Webber penetrating the walls of that holy sanctum (Sondheim, fine, though the ENO Sweeney was not one of their best shows). But I should point out that these money-spinning annual musicals don't eat into ENO's standard rep time; they appear around Easter when there used to be ballet. 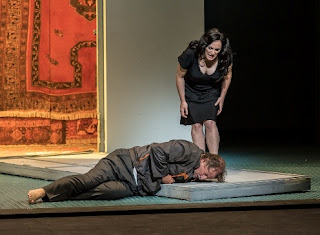 We snatch the odd episode between or after evening commitments. Lady Macbeth of Mtsensk was, as anticipated, the stand-out triumph, fully vindicating a massive interview with conductor Mark Wigglesworth I put up on The Arts Desk more or less in its entirety (pictured above by Clive Barda: the phenomenally various Patricia Racette as Katerina with rat-poisoned dad in law Boris as sung by Robert Hayward). But I also enjoyed an exceptionally rich parade of contrasts in late September – the most vital entertainment possible in baroque violinist with a difference Bjarte Eike’s Alehouse romp after his Image of Melancholy programme at the delicious Sam Wanamaker Playhouse, “the Trocks” dancing classics to Petipa-perfection followed by a Ukrainian Don Juan, perfect chamber music at the Wigmore, two great performances of Mahler symphonies on consecutive nights.

*Just finished a Sunday evening's worth of that series to the bitter end, and though for the first time I guessed the outcome of what we see in the first episode as usual - halfway through, at least - it was as intricately plotted and resolved as the others.
Posted by David at 17:52

Well, you are well ahead of us in watching classic American series, and this is no exception. I'm glad to know that once again, Lily Tomlin lit up the screen in her small part as few can do. We saw the movie Grandma recently, and she was terrific in that, though overall I wouldn't say the movie lived up to its advance press. But no matter, it was a chance to see her in a central role. And speaking of central roles, I so wish I could have seen that Lady Macbeth with Racette in the title role. I wouldn't have thought of her for that, but now I'll race to see her in it if I get the chance. Your review on TAD was gripping, and as I've already noted, your interview with Wigglesworth was terrific. I also appreciate the variety of performances you've attended and reviewed, and not only "big hitters." How else will we learn of new talent if the performances aren't reviewed? Your description, for example, of Gareth Farr's Forbidden Colours made me rush off to try and find the piece for a listen (no luck yet, but I'm keeping an eye out).

One New York lawyer should appreciate another of a rather different character (one can only hope...).

Racette is amazing, I think most folk agree who've seen the show. I hope to go again with my friend from Zurich next week (she's just been singing in Wozzeck so it will be a bit of a busman's holiday for her).

As for the big and small hitter issues, you will note that the last chunk has disappeared. Unhappy situation at the moment, needs some time out to decide what to do. Meanwhile I must be off to Kew to get in touch with what's real.