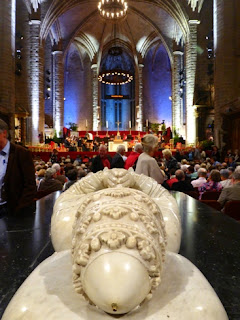 I can confess now that I didn't greatly enjoy the concert which was the reason - along with a chance to interview its conductor, which turned out not to be at length - why I went to La Chaise-Dieu. Mozart's Solemn Vespers seem to me fairly run-of-the-ecclesiastical mill, and Laurence Equilbey's Choeur Accentus, or at least the sopranos, sounded rather dim. Maybe it was the acoustics and they were better on their Barbican visit - Peter Quantrill admired them in his Arts Desk review- but the programme I heard didn't encourage me to catch it again in a different venue. 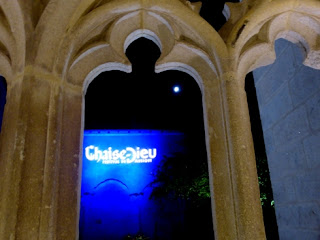 More memorable was the 'bonus concert' I heard on the evening of my arrival, courtesy of the impressive Chaise-Dieu Music Festival. This was a token attempt, but still one worth making, by Sébastian Daucé's Les Correspondances to capture in two hours the spirit of what originally lasted 13: the Ballet Royal de la Nuit masterminded, and partly danced, by the young Louis XIV in 1653. Each of the 'quatre veilles' excerpted music from large royal projects, and I'm especially grateful to the evening for showing me how the most outstanding contender was the music from Luigi Rossi's Orfeo. Otherwise I might not have made a special effort to go and see the Royal Opera's exceptionally well-cast production in the candlelit magic of the Sam Wanamaker Playhouse last Friday. That boasted at least five exceptional young women's voices; this had only one outstanding singer, true contralto Lucile Richardot, but she was a real find.

The approach from Le Puy was magical, the vast volcanic plateau lit by the rays of the setting sun on an exceptionally beautiful evening. Despite one's awareness of climbing, La Chaise-Dieu itself gives little impression of its altitude (1082 metres) since there are only modest inclines around the cathedral-like St-Robert - successor of the original abbey-church, begun in 1343 by the de Beaufort who later became Pope Clement VI  and completed by his nephew in 1378. 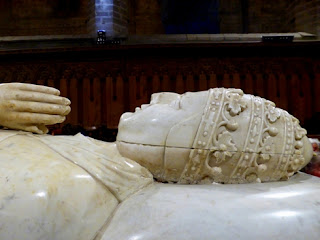 Pierre-Roger/Clement's black and white marble tomb is in the centre of the choir, where the best seats were (owing to the rood screen,concertgoers in the wide, low nave had to be content with seeing the musicians on screens of another kind either side of it). 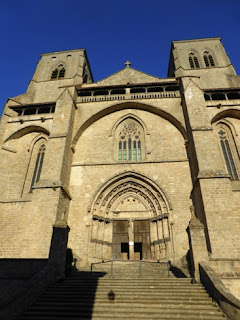 My Blue Guide describes St-Robert as 'in the plain heavy Gothic style of the southern French style'. Certainly there's no charm about it, but of course the west front creates a certain massive impression, and the porch was handsomely lit for the festival 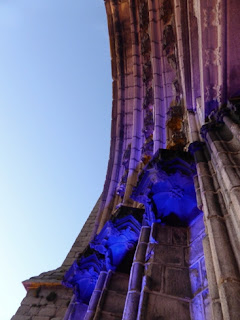 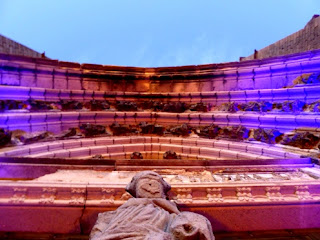 as were the two sides of the cloister that remain, restored to a pristine whiteness (featured in the second image).

The most striking feature was the one I saw last, owing to the artists using the north aisle as a dressing room: a crudely-executed but extensive 15th century tempera Dance of Death. Below the frieze furthest to the east is the tomb of Nicolas-Roger de Beaufort, uncle of Clement VI. 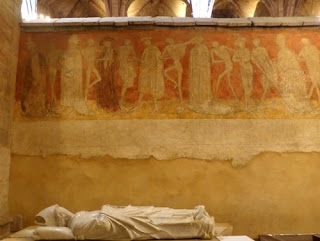 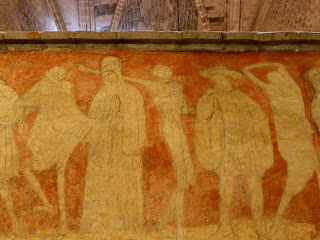 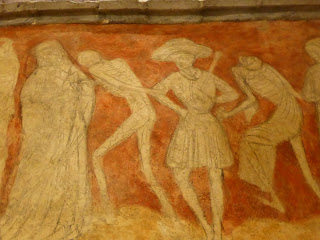 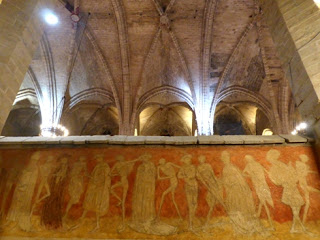 It seemed oddly appropriate to a small town, or perhaps village, which I found rather sombre despite the beautiful lights we saw it in. At any rate there was a cafe overlooking the church run by an extremely friendly couple, and another pair, Genet et Jean, welcomed us to the simple-looking Bistro Fougaou, which looked nothing special but served equally simple but utterly delicious food. 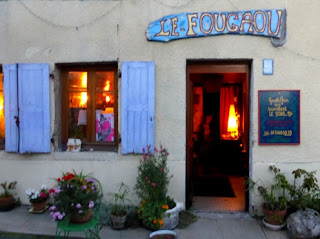 Still, I'm glad I was based in Le Puy. I certainly want to return, and walk in the Auvergne. And the good news is that the very special 50th anniversary of the Chaise-Dieu Festival, founded by the great Cziffra, will feature a performance of the Monteverdi Vespers in that great cathedral, which because of its 'working' status as one of the starts to the Camino route rarely gives dispensation to concerts. Meanwhile, here's a last snap of the rewarding landscapes of the Haute-Loire caught on what must be one of France's loveliest train journeys, following the river all the way between Le Puy and Saint-Etienne. 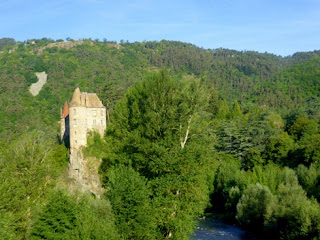 As an add-on I might remark then when he was 25 Cardinal Mazarin died ( taking farewell of his pictures one by one)... so the court asked " To whom should we address questions of State?" To which question Louis replied " To me"

I guess you know the fabulous ?coloured drawing? of Louis as Apollo/Sun showing off his shapely legs?

Cardinal Mazarin is a fascinating figure - it's him we have to thank for Rossi's Orfeo.

After another day of GJ duty, I am feeling miserably earth-bound, so what a startling contrast to come to your post. I'm afraid I can offer only a silly little story, and really not about the region in which Le Puy sits, but close enough that I'll offer it. We long ago rented a place somewhere in the Dordogne where we "discovered" such delicacies as a salad that included walnuts and bleu d'Auvergne, as well as a sweet wine called (I think) Monbazillac. We thought at the time these were the greatest things ever (and still do love a salad with blue cheese and walnuts). On leaving, we headed to Rouen where we had dinner at a restaurant with a Michelin star--our first ever venture into such an establishment. After dinner we asked for Monbazillac, and the waiter, bemused (for I think it's not really a very fancy wine), suggested we might like Quarts-de-Chaume. Indeed we did, and partook as it was served . . . which, at least at that time in France was quite liberally. When it was time to pay the bill, I realized I had best get right out the door as soon as possible for some fresh air, so I plunked down a credit card and raced out with a wave of the hand and some ersatz French to the effect that I would return. A close call, but I kept it together and was able to come back to sign the bill. Of course, they could have written it for any amount, and I'm not so sure I would have been the wiser.

And the tantalising question is - WAS it exorbitant? My own contribution on this front: a last evening in Lisbon, and we were eating at an unpretentious fish restaurant on the harbour. J chose giant prawns and couldn't eat them all. Come the bill, and he realised he'd not seen the final nought. Way the most expensive thing on the menu. And I think they were Dublin Bay prawns to boot. In those days it was cash only, and we barely had enough money left to get a taxi to the airport at dawn.

Re Le Fougaou, I assume it was reasonably priced but I don't know because, ahem, this was the only meal to which I was treated on the trip, in the lively company of La Equilbey and her nice orchestral/choral managers.

Sorry for the ongoing grind of your jury service.

Monbazillac comes in several qualities ( as do many wines of course) The ones usually thrust forward can be a bit cloying, but go up the price ladder just a bit and one can understand David's view

My experience in not realising the noughts was in Jordan. Regardless of expense we lashed out on an impressive scale at a famous restaurant, only to find that the prices were LESS by a factor of ten ( we having got muddled about the exchange rate ).

I have nowhere near as refined or as expert a palate as you, Sir David, and very possibly I was seduced by a cheaper-end Monbazillac. But I like extremes of taste, and the name too.

Ah, the cheapness of the Middle East! Falafels from stands in the Damascus souk - alas, alas - at 2p a wrap...

And of course I don't remember (the actual cost), though I think not a missing naught, or I would have collapsed. Your tale of Lisbon we must keep in mind as we head there next spring! As for Monbazillac, I have now read that it declined over time, but then quality improved markedly with a ban on mechanical harvesting. Ah, noble rot!

How strange to find a Pope's tomb in such a place so far away from Rome or Avignon? You do wonderful travels.
If we move to Charlottetown in PEI we will have to delight you with descriptions of the many great red sandstone buildings and churches covered in fine art work. And its connection to Prussia and Frederick the Great. No Popes buried here though.