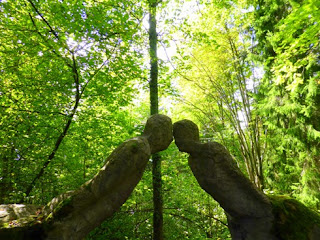 My too quickly loved and lost Lumix camera may yet turn up at Cannon Street's lost property office (I only found out on Friday that Victoria, the terminus of the train on which I think I left it, was not the station where it might be lodged. They could at least have rung me back to tell me that my detailed report three weeks ago was misplaced). If it doesn't, I'll have to do without my own illustrations for the long-delayed chronicle of this year's Norfolk Churches Walk plus some spectacular shots of two very weird sunsets over Lake Vesijärvi in Finland. Goddam it, I'd have had all my Lahti pics if the camera hadn't run out of juice halfway through the download, thus not saving even the half it was supposed to have caught.

What I had saved before that was the cluster of pics taken on a blissful Sunday morning walk from the empty, not especially lovely town centre of Lahti down to the lake through the Kariniemi Park, knowing that I'd want to select one for my Arts Desk piece on the Lahti Sibelius Festival. The supply dries up around 1pm, when I came down the other side of the hill 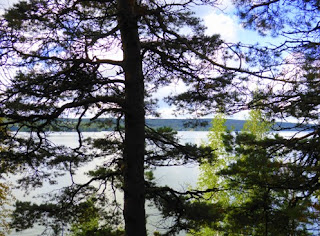 to find Lahti citizens out and enjoying all kinds of leisure on the promenade along the lake; a pity those photos are lost, because I know I caught the interaction of people and nature rather well in some of them.

Still, it was a happy hour or so in what was the nearest I could get in my short stay to real Finnish woodland, and that's suitably recorded. This part of Kariniemi is officially an arboretum, though it seems to have evolved into a real forest, the light and shade playing on 12 reinforced concrete figures by local artist Olavi Lanu (born in 1925, died as recently as May of this year). The beauty of it is how they've weathered since the early 1990s, how moss and light contribute to their impact as they rest comfortably in what seems like their natural environment.

Standing guard alongside are different species of the northern trees which made Lahti an important centre for the timber industry in the 19th century - logs would be shipped through the lake system by boat and then taken by train to St Petersburg or south to Helsinki. So Paju ('Willow') 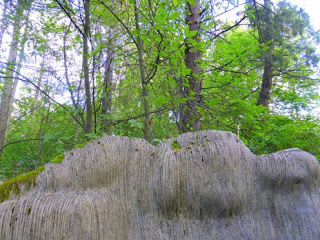 has the Siberian fir (Abies sibirica) as lofty companion 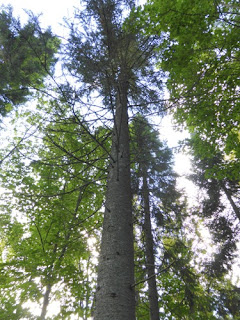 while the mossy couple of Harmaa tammikuu ('Grey January', looking anything but in early September) 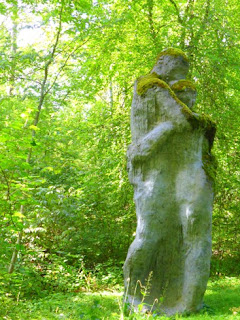 stand in a glade featuring the Siberian larch (Larix sibirica). 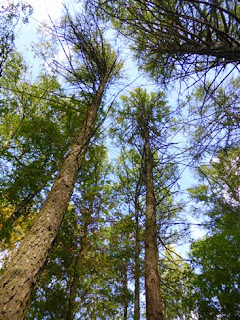 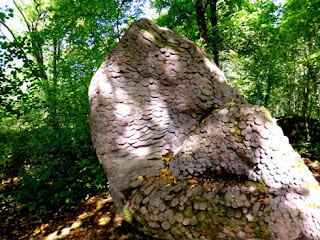 has Populus tremula, the aspen, to lend a green thought to a green shade. 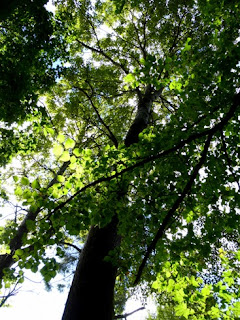 The happiest harmony between art and nature is where the lovers of Kaksi Kivea ('Two Stones') try to kiss in a glade. In the second of two pictures it looks more as if they might be Pyramus and Thisbe, trying to make contact through the wall that parted their fathers. 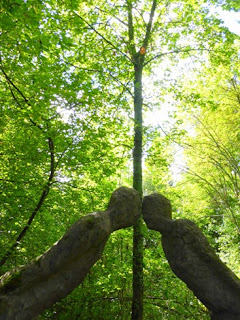 Iso Kivi, 'Big Stone', yields up different interpretations depending on which angle you view it from, as must all good sculptures. 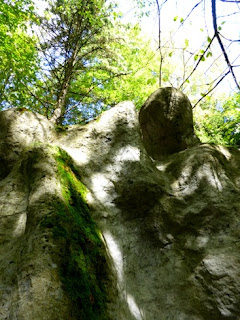 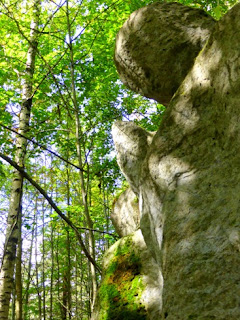 while Kierteeinen puu, 'Twisted Tree', seems like a blasted relic in amongst all the woodland life. 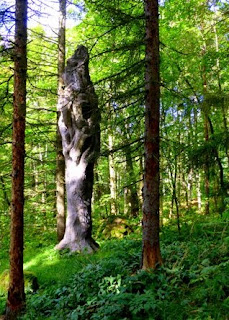 Hella Kivi, 'Tender Stone', finds another couple embracing in a way that makes one feel an intruder 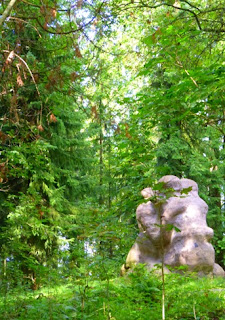 and then, on the north-east slope down to the lake, nature takes over with mossy stone providing its own natural sculptures, 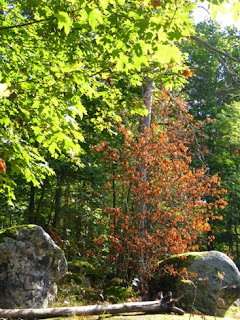 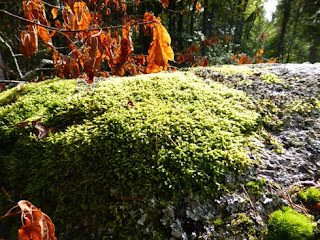 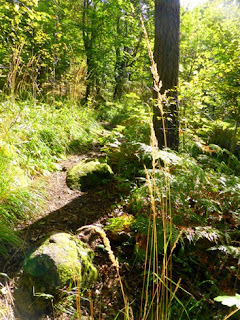 Polypores bracket themselves on to fallen timber 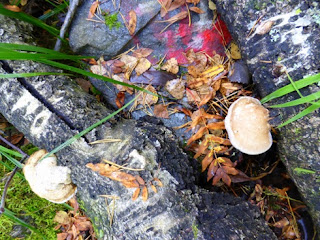 while glades of silver birch and beech trees show a softer aspect. 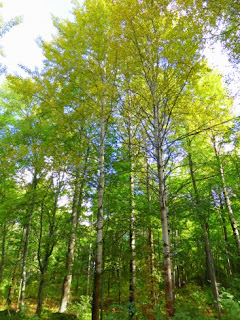 All the while Grieg's 'Morning' from his Peer Gynt music came wafting through the wood; I finally twigged that the musical fountain on Piku-Vesijärvi, the pond down in the park, was doing its 1pm stuff. Nature again took up where the music stopped, and an especially brilliant song came from a bird who was watching me intently. I'd be grateful if anyone could identify the masked avian. 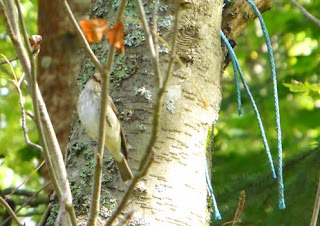 Waxwings have eye-masks, and it could be that the crest is hidden, but I think they have other adornments which this bird lacks. The only ornithologist among friends of yore, Rob Innes, has vanished off the scene. Ony connect: he who once travelled to a really unattractive industrial part of China to track down a grey rarity on a roof also loved Sibelius; the Fourth Symphony was his favourite piece of music. 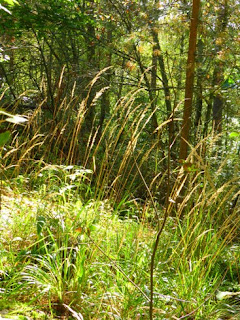 and the lake finally appeared through the trees. 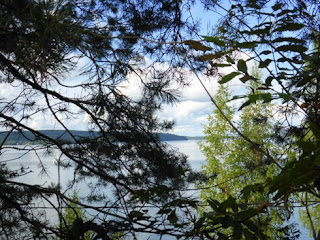 I've already written with wonder of Lahti's greatest man-made wonder, the glass-shelled, wooden interiored Sibelius Hall designed on a tight budget by two Finnish architects of great imagination, Hannu Tikka and Kimmo Lintula. It opened in 2000 and its even more amazing atrium with an indoor forest of columns -here seen from outside - 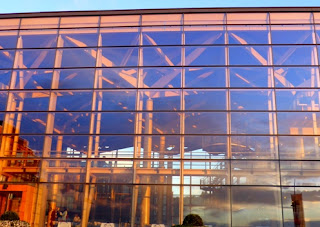 rising to a night-sky of fibre-optic stars positioned as they were at the time of Sibelius's birth 150 years ago. 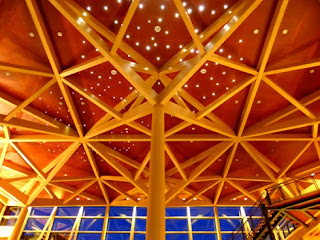 The blazing skies of two different sunsets, and shots of my good companions, world-renowned acoustician Larry King and Musical America editor Sedgwick Clark, have been lost other than to fond memory (which should be enough), but reflections of the natural wonder in the glass of the hall on two different nights remain simply because I'd downloaded a couple of pics in readiness for my article. Here's the Sibelius Hall relatively close 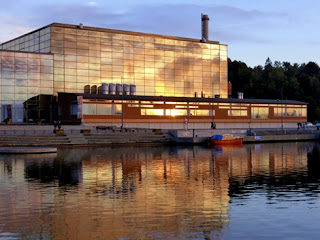 and from the jetty by the Piano Pavilion, designer Swedish architect Gert Wingårdh, one of several wood and glass commissions in the vicinity. 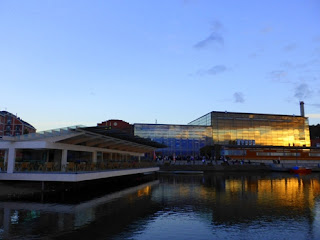 As for the perfect sounds within, you can get some idea from the Lahti Symphony Orchestra's new BIS set of Sibelius symphonies with its current music director, the great if recently invisible (to us in the UK) Okko Kamu. I've just reviewed them alongside Rattle's Berlin cycle for the BBC Music Magazine, and if I say that the main opposition was the seemingly natural and spontaneous versus the artificial and beautifully-coloured, you'll have a good general idea of what I thought.
Posted by David at 10:02

David, your woodland images of Kariniemi Park and Olavi Lanu sculptures and their accompanying descriptions are marvelous. The nature references must have required extensive botanical research unless you know(?) the tree species by heart. Wow, in either case!

Neither case, alas, Larry ((thank you). The trees in question were signed, like the sculptures (though in the latter case there were no English 'subtitles' - I had to get my Finnish friend Anneli to translate the names for me). I know my rowans, silver birches and beech trees, but not the various types of conifer and still doubt if I could tell them apart.

The sculptures are perfectly in tune with their environment, aren't they? And of course your photographs display that beautifully, including the seamless transition to nature's own sculptures. Glad to get. A glimpse of the concert hall in Lahti, too. Keeping a good thought that your camera will turn up.

Glad you think so too, Sue. Yes, the transition from concrete on the plateau to natural stone on the slopes didn't feel at all jarring. There's more on the specifics of the hall(s) in the 'TAD in Lahti' piece. And Larry sent me some wonderful shots of his own which compensate for the loss of my own sunset-over-lake pics. It does teach one that everything remains in the 'inner camera' of the mind, but it's fun to be able to share, as you well know with your superb Innisfree images.

David: Yes, important always to remember the "inner camera" in such a case. Speaking of sharing, I just hope you were able to see the latest set of Innisfree images as fall unfolded, for at least one correspondent wasn't able to view most of the 2 slideshows (I've changed that and combined all into a single slideshow, which at least is working fine among the folks in my house). You were definitely the inspiration for this, BTW, with your reminder and encouragement to pay attention to Innisfree through the changing of the seasons. This fall has been absolutely splendid all around us here; I'm only sorry Innisfree closed 10/18, though I did get one more smaller set from the last weekend which I'll post anon. See also you have a new post up, and I'll look forward to getting there within the next few days. I hope, most of all, that one day you and J will get a chance to see for yourself!

Precisely why I haven't so far commented - the slideshow wouldn't load. I thought it was my computer's slowness and intended to return. Which now, since you've told me you've made it easier, I will do. That sounds very didactic, 'pay attention', but in fact it should be a mindfulness mantra for us all, I guess.

Now the leaves are falling fast here, and while London has plenty of green spaces to observe it, I long to get out into the wilds. Various commitments currently preventing that.