A morning by the Mersey 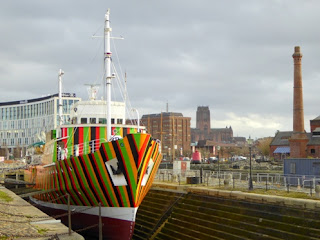 I went to Liverpool for the first time over 20 years ago, to interview conductor Alexander Lazarev, marvelling at the city's otherness. I only returned at the beginning of this month, choosing a very rare programme from the magnificent Royal Liverpool Philharmonic Orchestra under one of the world's best conductors, Vasily Petrenko - chiefly for the complete Third Act of Tchaikovsky's The Sleeping Beauty (every number, every repeat, all in one terrific sweep). I'll revisit the hall here, but not the concert, which I reviewed for The Arts Desk.

Glad I gave myself the next morning in the city, one of initial sun, wind and general clarity. My intention was to head for the Walker Art Gallery, still on the list to tick off, but somehow I felt I had to step out from my odd but not uncomfortable hotel in interesting Seel Street and down to the Mersey. 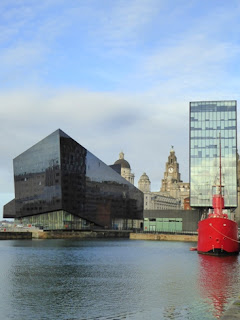 Much has developed there since I first saw the then relatively new Tate Liverpool, and of course the whole setting sucked me in. Up top is looking inwards towards Sir Giles Gilbert Scott's massive Anglican Cathedral, with the Venezuelan artist Carlos Cruz-Diez's painting of the harbour pilot ship Edward Gardner along the 'dazzle' lines of the way craft were painted in 1917 and 1918 in the foreground. 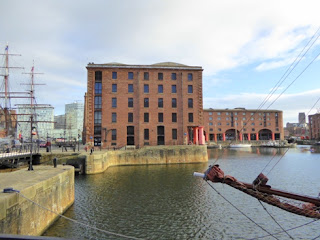 Hadn't been intending to go back into the Tate, but glad I did, even if I never got to the Walker. Plenty to see here, in the company of great views from various windows, 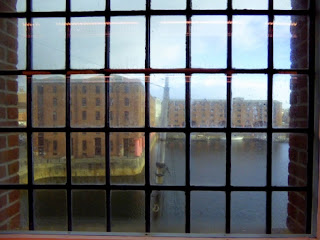 the building seeming to float ship-like on the vast Mersey estuary, which I can only compare to the Neva or the Hudson. 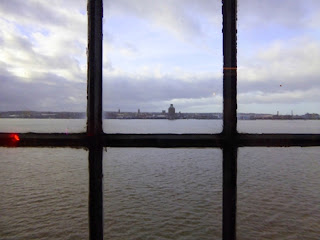 The ground floor gallery was showcasing Matisse's Snail, a giant cut-out featured in the great Tate Modern exhibition, this time keeping company with bronzes and some beguiling paintings, not least of inattentive and engrossed women readers. Above it on several levels were educational rooms in the 'Constellations' series, choosing an artwork and connecting it by various themes. Cezanne's centrally placed Gardener Vallier was one great choice, Louis Bourgeois's row of breasts representing the depersonalizing seducer Don Juan another. But the room which really hooked me was a remnant from what must have been a great exhibition, African-American artist Glenn Ligon's curatorship of works which took his fancy alongside his own, Encounters and Collisions. I subsequently ordered up the catalogue, a good Gesamtkunstwerk with articles and short stories as well as images. 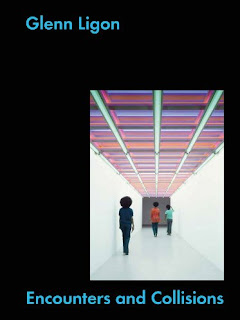 Concept is at the heart of Ligon's own dominant installation Untitled, 2006. He's painted over the neon, so that the potential light of a still-redeemable America only glimmers behind black (this image and the next courtesy of the Tate). 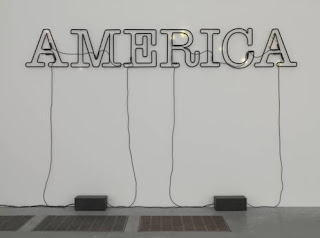 In another fascinating idea, the final scenes of Edwin S Porter's 1903 silent film featuring 'blackface' actors based on Harriet Beecher Stowe's Uncle Tom's Cabin, with the picture long vanished, makes a comment on the historical disappearance of black people through history. The Death of Tom is accompanied by a really wonderful soundtrack from jazz pianist Jason Moran based on the vaudeville song 'Nobody'. Works by others in the room include Lorna Simpson's composition made up of photo-booth images of black American men in the 1950s, too detailed to work as a reproduction here, and Franz Kline's Meryon (1960-1). 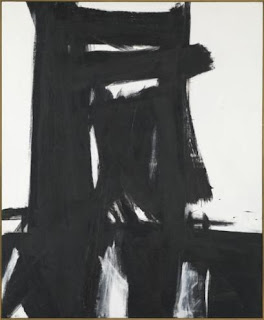 After a coffee in the cafe, with great views through the windows of Albert Dock - the first construction, in 1846, purely of cast iron, brick and stone - I walked around the docks area and the ferry terminal. 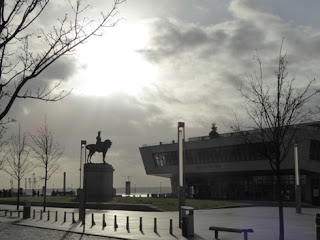 Incredible to think that nine million British and Irish folk left here to seek a better life. Less good to think about the slave trade so important to Liverpool. All of this is duly documented in an area that keeps its atmosphere despite a certain museumization (still, glad that Albert Dock didn't become a landfill site, as considered in the early 1980s).

Past some striking new buildings, one reaches a familiar cityscape: the so-called 'three graces' 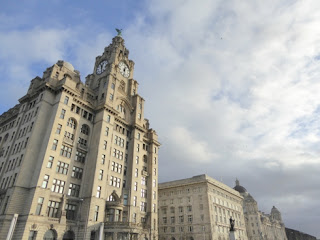 dominated by the Royal Liver Building, inaugurated in 1911 and dominated by the two 'liver birds' which quickly acquired mythical status (chained because if, like the ravens of the Tower of London, they fly away, the fabric will crumble). 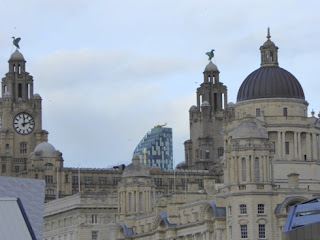 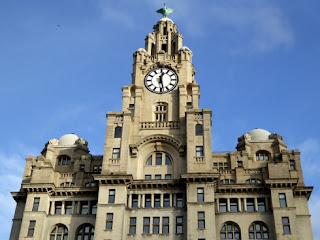 I didn't realise that the statues of Liverpool's fab four had only just appeared here, which would account for the crowds gaping at them and snapping away. 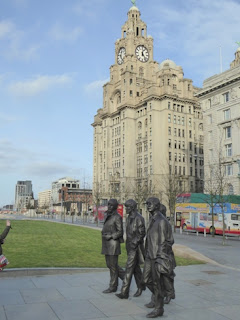 It was by chance that I soon came across Mathew Street with the famous Cavern where the Beatles played over 300 times. 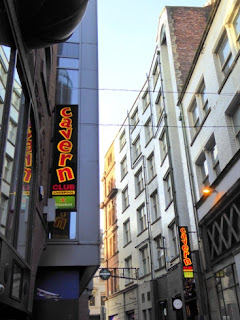 This is the centrepiece of the more recent mythology of the city (well deserved). 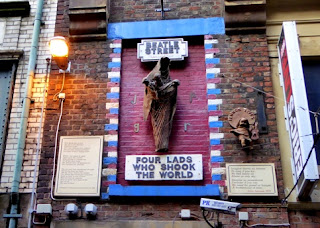 Nearby is the very handsome Georgian Town Hall, closed for a Christmas function, so I only snapped the fine ironwork in the porch 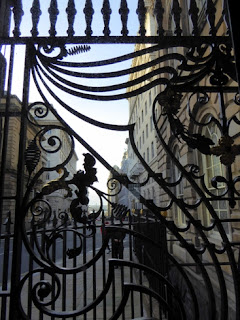 and a diversity of temples of religion and commerce. Liverpool reminds me of Glasgow, with equally friendly people but surely a higher quotient of fine Victorian and Edwardian architecture. 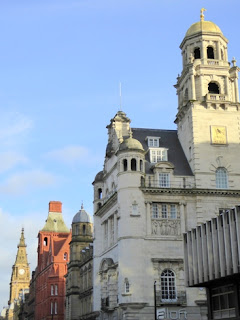 Having collected my rucksack from the hotel, I took a detour on the way back to Lime Street Station so I could see the Royal Liverpool Philharmonic Hall in daylight. 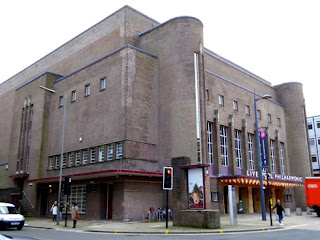 The auditorium has had the best of the overhaul work finished earlier this year, and sadly I didn't photograph that, but you get some idea of the fine foyers including a welcoming bar and gilded reliefs of Apollo by Edmund C Thompson 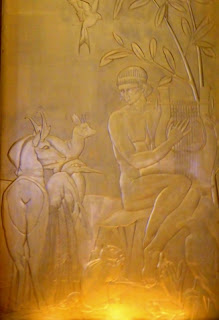 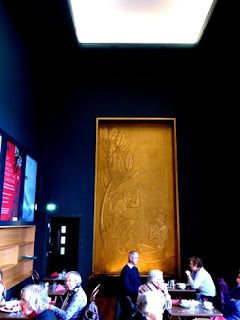 in line with what I gather is work in 'Streamline Moderne' by Herbert J Rowe in the 1930s, following the destruction by fire of the original concert hall. 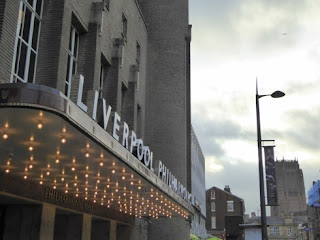 Then across Hope Street to the Liverpool Metropolitan Cathedral, aptly known as 'Paddy's Wigwam'. 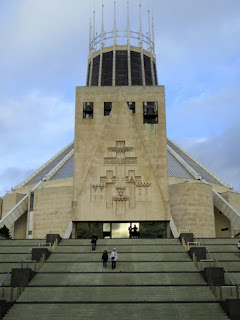 The original plans to a design by Lutyens only reached the crypt, which I didn't have time to see, but the postwar rethink left something no doubt more extraordinary, to which Liverpool Catholics contributed every penny they could. Completing Fred Gibberd's design took from 1962 to 1967. Impressive as the outside in reinforced concrete with Portland stone cladding may look closer too - not least via a vast flight of steps only completed in 2003 - the inside is worth a gasp or two. 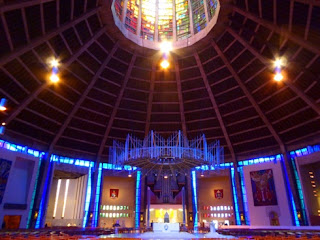 A democratic circle with the altar at the centre, its glass glows somewhat lugubriously and up in the dome is a memorable design by John Piper and Patrick Reyntiens, its yellow, blue and red representing the Trinity. 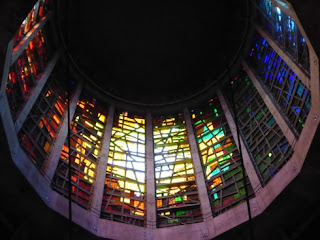 I was sorry to have to leave precipitately, especially since the friendly lady who talked to me about it had much more to say, but I only just caught the train. 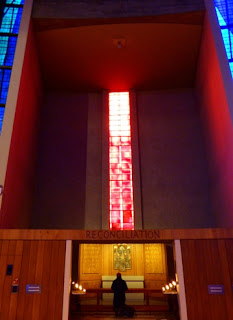 I'll return, of course, but it was good to see Liverpool pre-Christmas, even early in the morning as various 'entertainments' made their way to the shopping precincts. 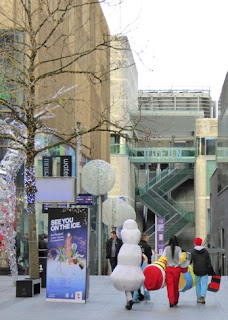 Since then, white lights and candles have shown me how truly beautiful seasonal illuminations can be in Sweden, courtesy of a wonderful day and a bit in Örebro, so that put me in more of a festive mood; more on that anon.
Posted by David at 15:36

Much to love about Liverpool, as these pics make plain. Puts in mind J's brother, telling us about going to visit a friend in Newcastle, where he was surprised to find a lot to like. So much for coal . . .

I've only been to Newcastle once, in my last year at university when we were buried in two theatres watching RSC productions of Volpone (with Richard Griffiths) and Measure for Measure (with Juliet Stevenson, unforgettable, and Daniel Massey). Liked what I saw and whom we met very much. Now of course there's The Sage, which I'm ashamed not to have visited yet. And the art scene is very lively, I'm told.

It is difficult to remember how rich and important Liverpool was in its great days, as witnessed by the Town Hall - indeed it is a bit of a shock to come across its eigtheenth century style and its liveried servants

The whole stretch down from the Town Hall to the 'three graces' speaks of wealth and Empire - especially the India Building with its coffered arcade.