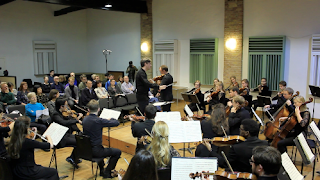 I mean that in the genuine original sense of Shakespeare's Miranda, not ironically like Huxley. Among the many good deeds in a naughty world - and it's never seemed more horrible, in my lifetime, than this year - are the enterprises of young musicians like violinist Ben Baker and conductor/cellist Jonathan Bloxham. It's been my greatest pleasure to follow the trail from the East Neuk Festival, where, having arrived the night before the Retreat players' second concert, I only just met Ben, via Pärnu, where he was playing in the superlative Festival Orchestra along with Jonathan who was also on the conductors' course, to Southrepps and several Wigmore Hall recitals.

In all of which there was no need to talk of promise: the complete, sophisticated musicianship is totally there already. And it made a nice farewell to a great musical year earlier this month to attend their 'Christmas Charity Concert' in The Warehouse, Waterloo (both photos of orchestra, conductor and soloist by Boris Bizjak). Voluntary donations were to go to as fine a charity as any worth your attention, Migrant Offshore Aid Station (MOAS), to which I'm also going to give all the money we save on stamps and cards by sending e-season's greetings. 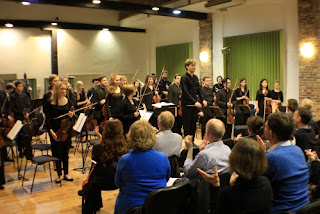 The young - in some cases very young - orchestra of students and graduates made as fine a job as any I've heard of Mozart's Figaro Overture, Barber's Adagio for Strings and Haydn's 'Surprise' Symphony, with Sibelius's Valse Triste as an encore (Jonathan following in the footsteps of master Paavo Järvi in Pärnu). All the more remarkable on three hours' rehearsal that afternoon. Jonathan has an elegant conducting style and is getting to grips with the individual rubato so essential to conductors of quality (several famous ones don't have it, and never will). Ben played the second of Beethoven's Romances for Violin and Orchestra, usually a bit mundane but not in the hands of this supreme, understated master. Friends I'd invited along were wild with enthusiasm at the quality. 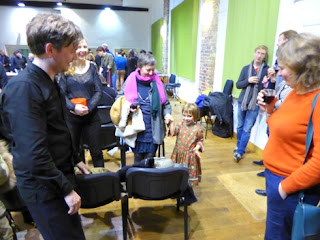 I'm not sure that goddaughter Mirabel (pictured above with Jonathan, Estonian violinist Marike, mum Edwina and friend Caroline) would have gone quite that far, but in attending her first grown-up concert - an hour without interval seemed manageable, and so it proved - she took it all in, especially the 'surprise' of Haydn's slow movement, such a brilliant symphonic treat. Having won the hearts of several girls in the concert with the big eyes noted by Jonathan and Ben, she was also perfectly socialised in the after-concert drinks, running up to the box and putting in extra pound coins, chatting to perfect strangers. She's also more recently, courtesy of John Savournin, had 'Happy Birthday' sung to her by the cast of Charles Court Opera's panto Mirror Mirror at the King's Head Theatre, about which I've heard great things and which I can't wait to see in the interstices between Xmas and New Year.

Ben will be playing the Beethoven Violin Concerto at the next Warehouse concert, 28 February, 6.30pm.
Posted by David at 14:17

One of the great pleasures in life, surely, is to follow the trail of young musicians and see where it leads.

Absolutely, Sue, as I know from your wonderful support for Contemporaneous (readers who want to know more should flip over to Sue's blog). I was thinking about them today, how admirable they are in pursuit of the new, but also hoping that they do all get to play the great timeless works for perspective (and food for the soul). To pursue what is bound to be nine-tenths ephemeral is so admirable, yet it does have to be leavened somehow. But yes, the point is that both our sets of new young friends - and mine do play new works, too, viz the Egmont Trio review - give us a sense of the future being in remarkable hands, a continuity for what really matters.

I think any musician/composer who is serious about his/her art, whether focused on "new music" or music of the past, would want to engage with music across the centuries. How else does one get scope and perspective? I think, for example, of Tamzin Elliot, whose interests include traditional Georgian polyphonic music (she sings in Bard's Georgian Choir), and I'm sure it provides inspiration for her own compositions. Milena Gligic, Contemporaneous's pianist, has just reported she's been chosen as one of six "Vocal Piano Fellows" at Music Academy of the West—the audition for which included Faure, Schumann, Barber, and Mozart. Every time I turn around, David Nagy, Contemporaneous's bassoonist, has gone to another opera at the Met. These are young people with a deep and wide love of music of all sorts who have also made a commitment, which far too many don't share, to keep challenging themselves and expanding their horizons by exploring the newest of the new. So, yes, I join in heartily to that sense of the future being in remarkable hands, and to more wonderful music-making in the year ahead!

Good to know all that, not least that remarkable Bard has a Georgian Choir (how I'd love to sing with them, though we do have a good Bulgarian Choir in London).

Unfortunately too many students here are fixated on the new, or at least don't listen to/play pre-Rite-of=Spring music (I know, that's hardly new, but still...) Attitudes are changing, but most Oxbridge folk I knew when I was younger confined themselves to contemporary and very early, while I was probably too much stuck then on romantic and early 20th century music. A friend who's since opened up suggested that they were afraid to confront raw or excessive emotion, though I'd have thought adolescents were the opposite. Anyway, you rightly correct me in Contemporaneous's case.

Your friend's comment about fear of confronting raw or excessive emotion rings a bell, actually. Not so much in the case of the Contemporaneous musicians/composers to the extent I'm aware, but my sense is that response is definitely out there, and I suspect more with men and women, though that's speculation, only. I feel a lot of the new music I hear is much more "head" than "heart," and I must say it gets wearing for me as a listener. I also was quite struck by your observation about new music as "nine-tenths ephemeral" (though probably also the case in music over time, I'd think). That resonates with me quite strongly, and I do think "new music" is crying out for thoughtful curators. Indeed, one who has a BIG curatorial voice produced a list that made me absolutely apoplectic. It's here. A music-friend offered up the term "nothingburger" to describe a couple of the selections, and I think I'm going to have reason to use that phrase from time to time. Meanwhile, there is such a lot of wonderful music coming out of Finland and so many other places (e.g., Kalevi Aho, my most recent infatuation) that we never hear about in the US. What's up with that, as they say?

But back to the Romantic and expression of emotion, am I ever with you on that, and I now understand why you and I have such kinship of taste (though certainly you've extended my own repertoire vastly). I'm reminded of Bard's new initiative, "The Orchestra Now." It's not really, I hasten to add, about "now," but more reflects Botstein's approach to music in historical and cultural context. (David Nagy, the Contemporaneous bassoonist I mentioned earlier, is in the orchestra.) I think I may have mentioned Mom, J & I, and other friends attended its inaugural concert, in which, among other selections, a wonderful undergraduate cellist, Rylan Leonard, was soloist in Weinberg's Cello Concerto, which was new to all of us. Everyone loved it, and it's become one of Mom's favorites to play at home (on Spotify, she's so savvy). Part of what made it such a wonderful experience was Leonard's complete entrancement with the music, so visible on the stage, not only while he was performing, but also when listening to the orchestral passages in which he didn’t play. That's what I want to see more of: a lot more heart.

Yes, the arbitrarily chosen nine-tenths rule has always applied. I love Prokofiev's description of 'one-day butterflies' and how sure he was that in most cases his works were there for keeps. But I also remember Peter Jonas as ENO talking about the company's policy at that time of premiering one new opera a season. He said something like 'we haven't found a masterpiece yet, but it's essential that we still keep trying'.

I've also heard so many new pieces around the world that seem to travel no further than their native lands and festivals. There seems to be a mafia of international judges on the few composers we ought to hear (and in many of those cases I can't understand why).

Yes, good curators are essential. But too many subscribe lazily to fashion and the chosen few. That's good to hear about Rylan Leonard. Reminds me a bit of Alban Gerhardt, who sometimes goes on after his concerto to play with the orchestral cellos in the second half. And soloists are so much more endearing somehow if you see them in the audience loving the rest of the programme.

And the youth theme reminds me that I'm much more conscious of visually inexpressive older groups of players - predominant in the early music movement, because they were there at the start and all seem to be hanging on to their orchestral posts - if the distribution of age and youth isn't even in the orchestra (and of course it rarely is in the audience). We don't want faked emotion, but we do want to see the joy of playing - not enough attention is paid to that, still.