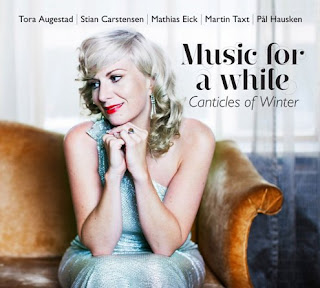 That's notes in both senses - purely musical ones, and writing about the music, which I was honoured to do for two releases of the highest quality. Actually both came out last year, but top Norwegian ensemble Music for a while's Canticles of Winter didn't get pushed/distributed here until recently (they came close to a deal with Deutsche Grammophon). My excellent friend and colleague on The Arts Desk, Graham Rickson, echoes most of my thoughts in the first of his Christmas CD roundups here.

As for what I felt on listening to the white-label copy, that's in the liner notes, and if they smack to you of gush, they're certainly not insincere. I really was bowled over by that chance encounter with Tora Augestad and her phenomenal players at a late-night cabaret in Stavanger, bought their Weill CD - one of the best, if not the best, I know - and got sent the selection of Dowland and other classics transformed. It's high time the group made their UK debut, preferably at the Sam Wanamaker Playhouse. This is an ensemble of equals, and if there's a better, cooler jazz trumpeter than Mathias Eick I don't know him. Stian Carstensen's accordion also adds sharp icicles, and not just to the group's second version of 'Der Leiermann' at the end of Schubert's Winterreise (very different from the first). Canticles of Winter tends to the dark, chilly side, but it's none the worse for that. 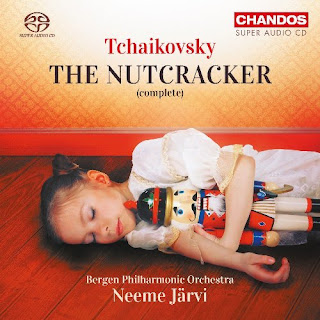 All brisk brightness, on the other hand, is the third and last of Neeme Järvi's complete Tchaikovsky ballet recordings with the Bergen Philharmonic for Chandos. I'm not so much proud of these notes as grateful to Chandos for letting me do what I'd always wanted - a number by number synopsis pointing out the specific nature of the musical genius in each. Good news, too, is that the equally idiomatic and characterful concert performance of The Sleeping Beauty Act Three from Vasily Petrenko and the Royal Liverpool Philharmonic Orchestra has been recorded for release on the RLPO's own label. 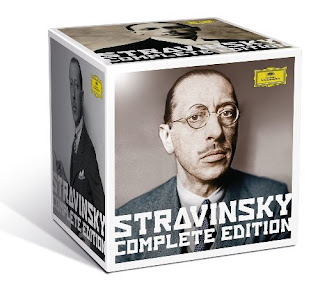 Finally, if you want a big aural binge in the lazy days between Christmas and New Year, let me reinforce what I had to say about two big Stravinsky boxes on BBC Radio 3's CD Review (four days left to listen on the iPlayer). Several friends have already bought the DG box on the strength of what they heard, and while Stravinsky's own performances are of infinite fascination on Sony, and the presentation much more sexy/nostalgic, 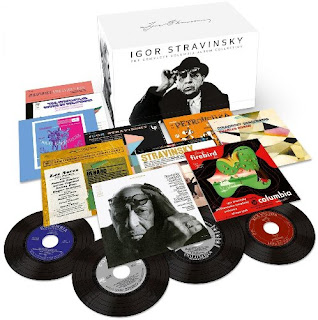 the variety of interpretations here is no doubt richer, and gives an interesting perspective on the range of approaches to Stravinsky over 80 years. Excellent value for money, too, I'm told. And it should be pointed out that neither edition is 'complete' - several key arrangements of other composers are missing though not, on DG, the essential, telling transcriptions of two Wolf songs right at the end of Stravinsky's life. I was pleased with the radio segue into the chromatic first of them from the dodecaphonic In Memoriam Dylan Thomas.

Happy listening, and season's greetings, with a second plea for charitable giving to Migrant Offshore Aid Station (MOAS). Circa 3,500 would-be migrants lost their lives at sea this year, another 30 hitting the news today. Even one would be too many.
Posted by David at 10:30

Thanks to your noting them, I am proud owner of all three Neeme Järvi Tchaikovsky ballet recordings. I can attest that not only do they make delightful listening, but also your liner notes are terrific. It's all too rare to get such detailed, useful information, and it adds enormously to the pleasure. Happy holidays to you and yours!

I see you got a double meaning in, too, with 'noting'. Happy holidays indeed to you both. We got a glimpse of turbulent seas today visiting J's ma in St Leonard's. And then a huge full moon rising above the station waiting for the train back to London.

Of course now I want that Nutcracker recording if for no other reason than to read your notes! You always make me spend money! LOL

Go on - splash out on all three NJ recordings of the Tchaikovsky ballets - you know you want to. I've been revisiting them a lot recently ('tis the time) and though on the one hand a lot is speedy, they build to an exciting whole (there's a point at which The Nutcracker Act Two just takes off). And of course your peerless compatriot James Ehnes is the violinist in Swan Lake and The Sleeping Beauty, can't get better than that.

Happy holiday listening to you and Laurent.

Listening even as I read your comment. And of course downloaded the Music for A While as I was at it. As part of our Ottawa Chamber series we are having a 40th birthday celebration for Mr Ehnes in April - Bramwell Tovey is composing a new work for the occasion. And yes you evil man I want the other two and will probably download them before the sun has set.

I presume downloads come with notes (see how innocent I am about these things - I do buy the odd historic aria off the demon Amazon as download, that's it). I still love the look of the finished CD and shiny booklet (though LPs were even better. I'm just about to rig up a new turntable).

Good lord, is Ehnes still only 40? He has a timelessly smart look about him. Absolutely one of the world's best and the most reliable musicianship of all. You remind me that I forgot to add his Wigmore recital to my best of year list on The Arts Desk, but one can't include everything.