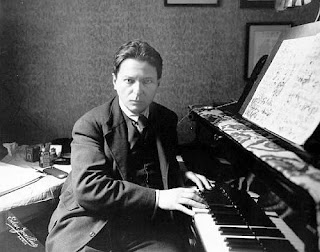 How I wish I'd devoted more than just two Monday afternoons of the Opera in Depth course this term to George Enescu's Oedipe. I knew the viscous sounds of the three symphonies, and the clearer lines of the neoclassical orchestral suites, but I'd postponed taking down from the shelf where it had sat unwrapped for so long the classic EMI recording with José van Dam, Brigitte Fassbaender, Gabriel Bacquier, Marjana Lipovšek, Barbara Hendricks and Nicolai Gedda with Lawrence Foster conducting the Monte Carlo Philharmonic Orchestra. Listening to it along with a handsome vocal score loaned by the Royal Opera turned out to be a revelation, and I don't think there could have been a better sonic guide. 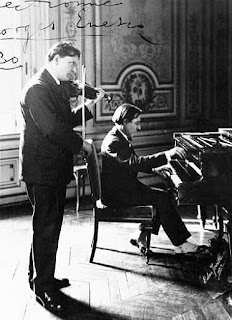 From childhood fascination with a set of 78s featuring the young Menuhin playing the Mendelssohn Violin Concerto and Enescu conducting - let me hasten to add that it was the era of 33rpms, but we had an old wind-up gramophone which I used to spend hours playing with -  I learned that Enescu had been a similar prodigy. But not only that: Cortot (pictured with Enescu above) thought he was a better pianist than most, and he had a phenomenal musical memory. There are plenty of testimonies to prove that he really could go to the piano and play any part of Wagner's Ring without hesitation. In his youth, he was, at least to judge from this remarkable photograph, very beautiful. 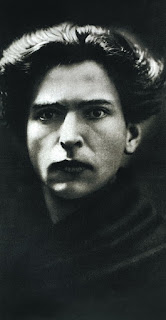 Menuhin, whose 100th birthday we celebrate this year, sums it up idiosyncratically in his preface to Noel Malcolm's George Enescu: His Life and Music:

If it is possible for the reader to imagine a man with an encyclopaedic mind which never forgot anything he hear, or read, or saw in the course of his lifetime and could recall instantaneously and play in the most incandescent way any work from Bach, Wagner to Bartók; if the reader could imagine that mind allied to the most generous and selfless of hearts in a human being with a nobility and beauty of build, of presence, romantic in the lineaments of his face, and always propelled by a creative genius whether in speaking, teaching, conducting, playing the violin, the piano, and, very particularly, in composing, the image would still not be complete; a man full of humour (and a most amusing caricaturist) as well as deep philosophy, conversant with the languages and literatures of Europe and England, a man imbued with the highest forms of chivalry and earth-loving patriotism - this would be the teacher I had since I was eleven, continuously for two years, then again for five years and then intermittently over the years that were left to us together. No book can do justice to a man of this breadth and nobility...he remains for me the most extraordinary human being, the greatest musician and the most formative influence I have ever experienced.

Just to listen to the classic Menuhin/Enescu/Monteux recording of the Bach Concerto for Two Violins is to share in that hypnotic, or rather mindful, spell. I played the slow movement in class the other week, and I can't speak for the students, but I know I was overcome with that deep-level feeling one gets in the best meditations.


Menuhin said of Enescu's Third Violin Sonata that simply reproducing all the demands in the astonishingly detailed score was hard work enough - not even Mahler or Puccini were more specific. 'Dans le caractère populaire roumain' accounts for the extraordinary writing: this is Enescu's own very haunting distillation of folk fiddling from his native Romania, with its unique fusion of Arabic, Slav and Hungarian music. Delighted to find a version of his own recording with fellow Romanian Dinu Lipatti that also includes the score so you can see exactly what's going on.


Enescu completed the Third Violin Sonata in 1926; work on Oedipe took virtually the whole of the Twenties. There are some connections, not least in the oriental scales of eastern European folk music which surface in some of Oedipe's more lamentatory passages (and there's a lot of lamentation). In Act 2 Oedipe sings a folk-like curse with the same quarter-tones marked into the score that also appear in the sonata. But how to describe the opera as a whole? It's colossally ambitious. Originally Enescu asked from his librettist, the poet and dramatist Edmond Fleg, a text based on Sophocles's Oedipus Tyrannos and Oedipus at Colonus, but didn't care for the two-part slab that resulted. So that was compressed and two more acts were added, dealing with celebrations of Oedipus's birth and Tiresias's dire prophecy in the first, the slaughter of Laios at the crossroads and the scene with the Sphinx in the second. 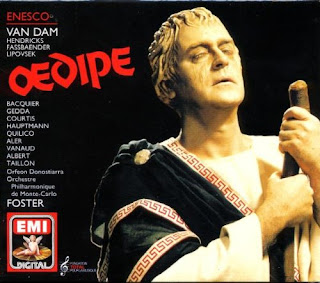 At the end of the first class, once I'd played the introduction and opening scene following a cross-section of Enescu's other works, a student said 'it sounds like nothing else' (since then, another has added that she faced the forthcoming Royal Opera production with trepidation, because the score alone on the recording conjures such phantasmagorical images. La Fura dels Baus will surely find strong ones, but they may not be the ones in the mind's eye). I agree - there are fleeting touches of Debussy and Ravel, but altogether it's a more original score than a comparable contemporary opera like Szymanowski's King Roger.

Enescu never overloads or prolongs the climaxes and seems - though it's premature to judge from a recording - to have a perfect sense of pace, especially in the third act which can be directly compared in its subject-matter to Stravinsky's deliberately semi-frozen (but oh so emotional at points) Oedipus Rex. Oedipe's three Act III sweeps of revelation feel totally organic. We've still got the fourth act to look at - cramming it in tomorrow alongside a first look at Barry's The Importance of Being Earnest, moving from the ridiculously sublime to the sublimely ridiculous.

I'd like to draw your attention to the scene with the Sphinx. Sadly this example begins with her first utterance - I'd prefer it to come in with her awakening, the fluttering of giant wings outdoing the hallucinations of Strauss's Herod in Salome - but the music for the scene itself is suitably discombobulating and ends with an upward glissando on the musical saw. The accompanying text is brilliant; provided with a translation alongside here, it shows you what a brilliant twist Enescu and Fleg gave to the myth. The standard mythic question ('what walks...' etc, used in Turnage's jokier Greek) is replaced with one which allows Oedipe to reveal both his heroism and his hubris. And the death of the Sphinx hints that she will have the last laugh.


Finally, let's go back to 1909 and the spark that lit Enescu's fire - his visit to the Comédie-Française to see the great French actor Jean Mounet-Sully (1841-1916) as Sophocles's Oedipus. Enescu declared that when, over a decade later, he tried to give musical voice to the self-blinding, it was Mounet-Sully's terrible cry that he had in mind. 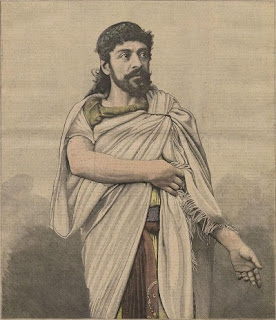 And those eyes - well, you can see how tragedy-mask big they were for expressing the role even better in this everyday photo. 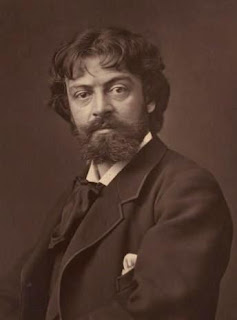 Of course you've got to love Enescu aged 70 for impersonating the performance. I lifted this from Malcolm's book, so I hope that's OK. 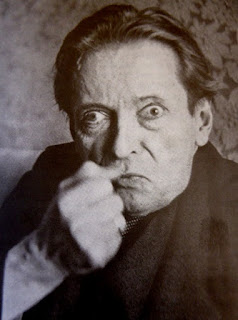 I was looking for film of Mounet-Sully - there are a couple of silent extracts, not online - and came across Jean Cocteau reciting his memories of a similar shock to Enescu's on encountering the actor as Oedipus at the Comédie-Française. Cocteau was 12 at the time but recreated the experience towards the end of his life with the utmost vividness. I like the look of the specially-produced little book he made on the subject. 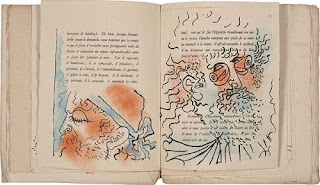 Who would make a great Oedipus today? I haven't seen one (Alan Howard was nowhere near) and the only British actor I can think of with the range is Chiwetel Ejiofor. Certainly bass-baritone Bryn Terfel would be ideal for the opera. Johan Reuter is down to sing the role at Covent Garden - on the evidence of his performance as Nielsen's Saul in Copenhagen last year, he'll certainly be up to the challenge of an operatic role originally written with Chaliapin in mind. That greatest of basses declined since his vocal powers in his mid-60s wouldn't, he felt, have been up to the mark. Anyway, it was a surprise connection to the opera we'd just reluctantly left behind this term, Musorgsky's Boris Godunov. Can't wait for Monday week (14 March), when Richard Jones, Boris director, and Barry, no less, join me at the Frontline Club for what the composer described to me as a 'Twin Peaks' event.
Posted by David at 20:32

David: You can be sure this will be my musical playlist for tomorrow (and I've already had a first listen to the beautiful Violin Sonata). Off and on I've thought to explore Enescu, but never quite knew where to start. Now I have a path, and what a rich one it is. Thank you so much.

You'll not be disappointed. The style is hyper-intense, and elusive; themes aren't easily grasped. But it repays the effort. If you like it, maybe try the Third Symphony next. I've just listened to the last act of Oedipe, transcendent. How we need the Colonus epilogue after the horrors in Thebes.

David,
Your post encourages me to pull out all the zones I CDs I have and play them again - even unwrap some. And to try and see Oecipe at the ROH. I had missed the fact that it is going to be produced.

A pretty frivolous postscript, David, but have you seen that film of Celibidache conducting the Romanian Rhapsody no. 1 (the one Enescu piece everyone knows!) from the 1970s on Youtube? It's a great joy - vocalisms from the podium and all.

I'd be interested by any tips on the symphonies, not least given that I'm tempted by the Lintu cycle on Ondine. Any good?

Jonathan, so good to see you here. J provided background - he tells me you were a national hero in Romania for taking it into the EU. What are 'zones 1 CDs', though? You MUST see Oedipe. After yesterday's class, focusing on the transcendent last act, I'm sure it's a masterpiece.

John, no, not yet, but there's nothing frivolous about the sheer joy of the First Romanian Rhapsody, and least of all about the great Celibidache in his prime.

I got to know the symphonies through the perfectly good Romanian performances on Olympia. I don't know the Lintu series, but I'd go for the three Rozhdestvensky discs on Chandos, which I'd love to hear. There's also a good Warner set of the suites with Foster: those are worth exploring too. Was pleased (namedropping again) to recommend them to Vladimir Jurowski, who recently conducted the Third Symphony (I couldn't go, alas) and didn't know them.

The performance of the concerto for two violins is gentler, less strident that the Menuhin , Odterich recording.
A very different approach.

Yes, it's a curious mix of the innately powerful and the spaciously meditative, if I can be forgiven two adverbs in a sentence. But who's Odterich?

Should be Oistrakh. Free cording with father and son .
Liam