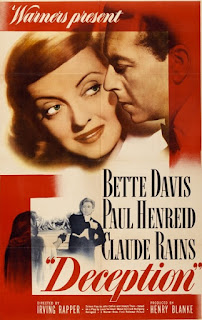 Having deeply admired Hollywood's most 'musical' drama, Humoresque, with its climactic scene of a desperate Joan Crawford drifting along a beach at night while her character's beloved violinist Paul Boray, played by John Garfield,  performs Franz Waxman's 10-minute Tristan Fantasia with Oscar Levant and orchestra, I finally got hold of another film in which the score is central. Deception (1946) stars Crawford's arch rival Bette Davis and features another prominent score, this time by Korngold. 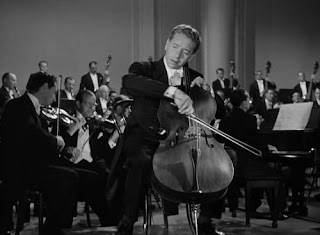 Paul Henreid is cellist Karel Novak, who suffered terrible things in Europe during World War Two before coming to America to make his name. So far, so good. But the woman with whom he's disastrously reunited is Davis in most affected mode, and she's been having an affair with tyrannical if not downright Svengaliesque composer Alexander Hollenius (Claude Rains, third of the winning trio from Now, Voyager: fun but perhaps inappropriately camp as a composer with very bad taste in luxury furnishings). 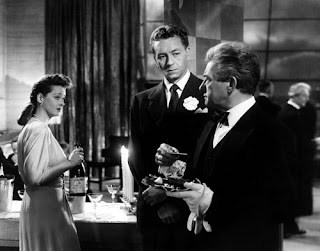 The silly story revolves around Hollenius wielding the power of his music to get Novak to play his Cello Concerto, for which Korngold provides appropriately acidic/melodramatic/romantic music. The cellist is Eleanor Aller; some remarkably fine Chopin (or is it Beethoven? I've forgotten already), not very convincingly mimed by Davis at the keyboard for a wedding party scene, is played by the great Shura Cherkassky.

The original 1927 play, Louis Verneuil's Monsieur Lambertine, must have been rather dreadful on stage, with a daft denouement, but these high-charisma folk and director Irving Rapper do bring a visual style to it. Unfortunately, whereas Humoresque gave a very truthful account of a dedicated violinist's rise to the heights and plausible concert scenes to show why he deserves to be there - as recounted in the blog on that film, Isaac Stern holds the bow for and someone else does the fingering, and I can assume something similar's going on for Henreid here - Deception regurgitates the usual cliches about a player so hungry for fame that he'll do illogical things (though there's quite an amusing caricature of an orchestral cellist all too ready to jump on to his platform if he falters). Histrionic fun, but not a great movie. 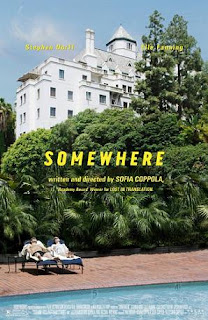 A refreshingly low-key, oblique approach to Hollywood ennui and alienation is taken by Sofia Coppola in Somewhere (2010). The washed-up emptiness of a star's life as represented by the laid-back Stephen Dorff, who has enough easy Jack-Nicholsonesque sexiness for you to understand why his character, Johnny Marco, might have got where he has, offers some amusing scenes, not least the ones early on where  pole-dancing twins perform perfunctory routines in Marco's hotel room at the (not too appealing) Chateau Marmont. 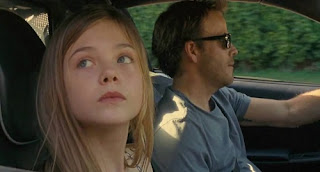 The way his 11-year-old daughter Cleo, played with real charm by Elle Fanning, comes back into his life is just as casual. Which makes the final peripetaia all the more affecting. Quite some gem, this, showing Coppola junior's originality as surely as Lost in Translation and the delicious Marie Antoinette.

And now that autumn's here, we must avail ourselves again of the Picture House pass and start catching up with the latest, which haven't been on the agenda over the summer months.
Posted by David at 09:42