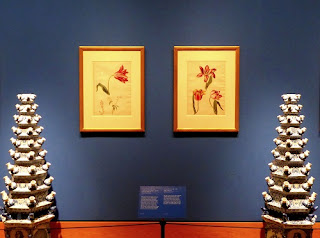 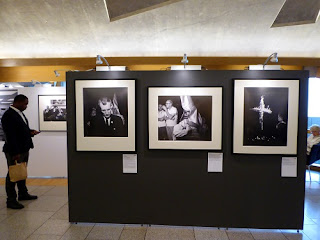 Asking around about good Edinburgh exhibitions over pasta and pizza at the excellent Bar Italia after Robin Ticciati's Scottish Chamber Orchestra Mozart over the road at the Usher Hall, I found my friend Julie passionately recommending the careful selection of Glasgow-born photographer Harry Benson's American photographs at the Scottish Parliament. Further consultation revealed that Painting Paradise: the Art of the Garden, drawn from the ever-amazing Royal Collection, had moved on from London - where I missed it - to the Queen's Gallery at the entrance to Holyrood Palace just opposite. So that sorted my free afternoon for me.

Having done some of the tourist things I mostly missed in my four years as a student - I feel a Calton Hill chronicle may be in the pipeline - I descended into the valley and headed first for the Queen's Gallery. Greetings and farewells here were very personable, and I ought to briefly mention my post-exhibition chat with a Hungarian postgrad classics student - working as attendant here, undertaking very specific study on the nature of the ancient Greek koinoi within a narrow timespan - about the whole Brexit disaster, how much freer I feel up in Scotland, as I did just after the Referendum, and how none of the European employees without whom nothing would function seem to have had any of xenophobic grief I've been so horrified to report in north London. 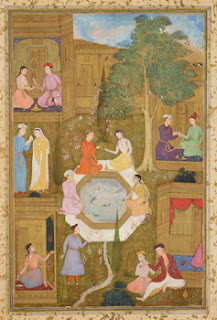 Exhibit 1 isn't European at all, but in the first place it refreshed my memory about how 'paradise' comes from the Greek, coined by Xenophon to describe the wonder of Cyrus II's desert oasis, and in the second the image has as its centre what I'd regard as essential to every garden - and what we briefly had in our back yard until the management destroyed it: a fish pond. It's an exquisite miniature by  Hamse-i-Neva'i from around 1510, added to a manuscript when it was transferred from Herat to Bukhara.

From these beginnings you can move on within the exhibition either to some fine paintings illustrating the Christian imagery of the garden (the 'Hortus Conclusus') or to the more realistic images for the late 16th century Renaissance garden. The work of art used on the poster is Isaac Oliver's miniature A Young Man Seated Under a Tree, with the exhibition poster closing in on the knot garden in the background, drawn from the age's leading manual on garden design. 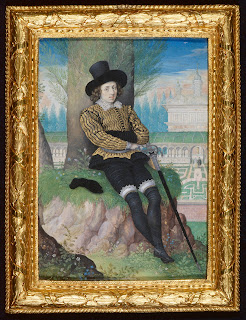 There's a touch more fantasy in the garden maze placed, by its background, in Venice. This comes from the imagination of  Lodewijk Toeput. 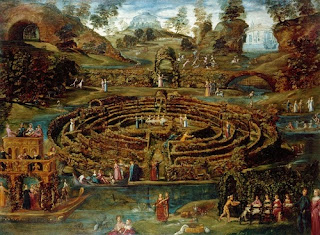 Needless to say, the Royal Collection is rich in paintings of the royal gardens. Most fascinating to me was what part of Bushey Park once looked like 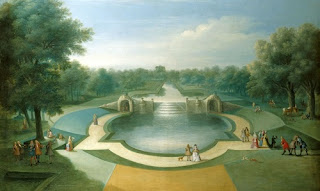 as well as Kew, a couple of centuries later 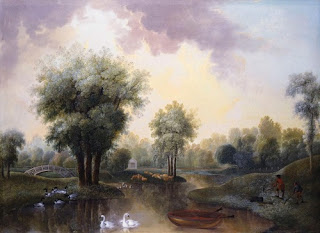 and it's fun to see the gooseberry trees in the plantations at Windsor. 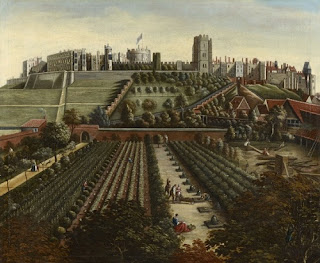 Close-up details of plants and flowers come among others from Leonardo, no less, who needless to say took a scientific as well as an artistic interest in such marvels as the seed-heads of two rushes. If he planned a botanical treatise, as seems likely, it was left unfinished at his death. 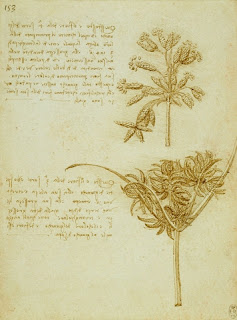 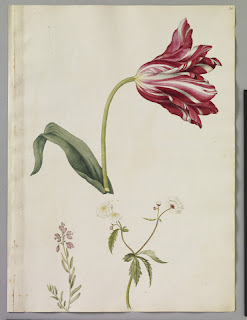 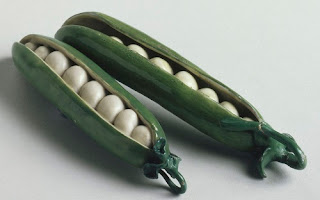 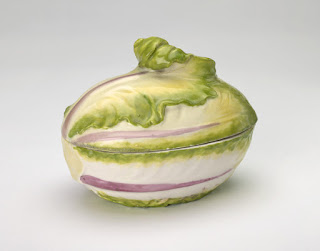 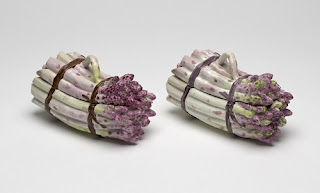 and I liked another indoor oddity, the Vincennes Sunflower Clock of c.1752, acquired by who else but George IV in 1819. 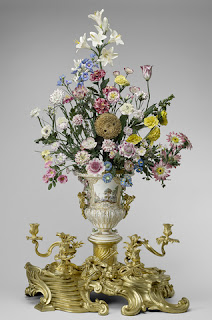 There are token nods at the landscape garden, a fine high background to Gainsborough's painting of the Cumberlands and Lady Elizabeth Luttrell. 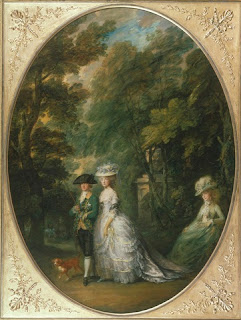 and one of Victoriana's most Biedermeierish images, by Landseer, focuses on the Queen, Prince Albert and the Princess Royal with selected animals and the East Terrace of Windsor Castle beyond, along which the Queen Mother is being pulled along in a bath chair. 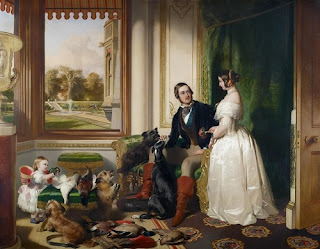 The last swagger exhibit shows how Buckingham Palace's garden parties were conducted in 1897, when this one was painted by Tuxen, the exhibition disdaining to bring us up to date. 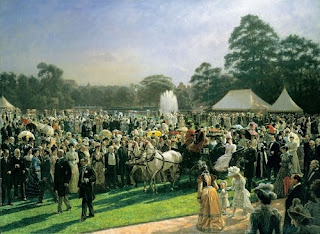 The 20th century takes over with more than a bang or two in Harry Benson's photographs of the American great and good, humble and dispossessed. His career properly took off on the wings of the Beatles' big success as American No. 1 in 1964, and there are plenty of fun, if posed images, like the famous pillow fight sequence 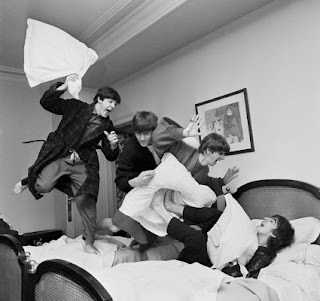 and their meeting with Muhammad Ali. 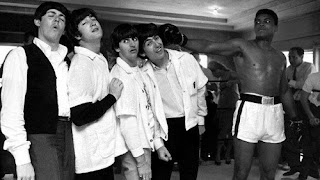 Two years later Benson was among the few photojournalists to accompany James Meredith on the March Against Fear, encourgaing African Americans to vote, and he has photographed all the leading political figures since. What's especially fine about this (free) exhibition is that both good and bad things come in twos and threes. The following pictures I went round taking at the end because there are no catalogue or postcards (copyright issues, apparently, but the warden was encouraging of my snapping). Compare young Hillary and Bill - the hammock image on the right is justly famous as a symbol of youthful idealism and love 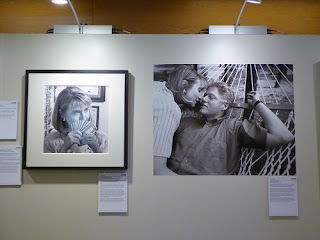 with Donald and Melania. On the left he's holding up wadges amounting to a million dollars in one of his casinos, on Benson's suggestion, and the right image is pure trophy-wife-ism. 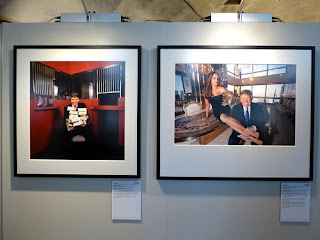 The tragedies and horrors are especially potent. Benson was there on the Robert F Kennedy campaign event which ended in assassination. Stunned like everyone else, he hung around to catch the horror of the event and the aftermath. The centre photo, of a bewildered young supporter at the end of a terrible day, really got to me. I found myself in tears more than one walking around. 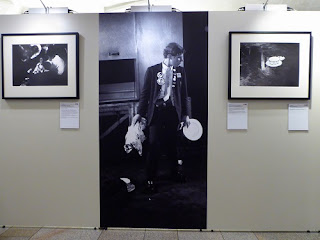 The funeral of Martin Luther King shows the bewilderment of children 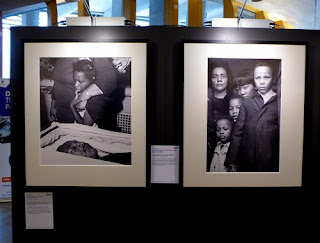 and there's a chilling contrast between Benson's photograph of Lennon's killer in jail and the protest against the murder. 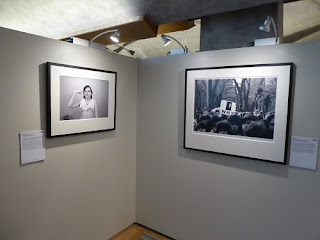 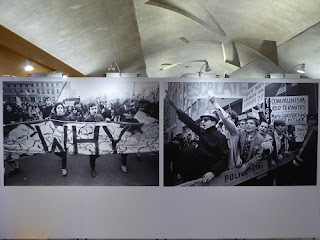 The three photos up top were taken at a Klu Klux Klan rally. The queasiness of the 'madonna and child' image has made it a classic. 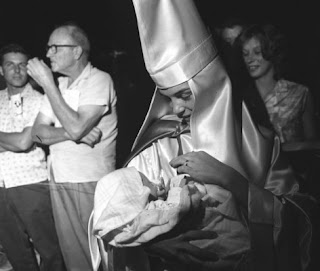 Time and again idealism meets a terrible end, a paradigm of American history repeated again and again. But the showbiz side of the Presidency gives us some wonderful portraits; you can't hate the Reagans when you look at them in the picture on the left. 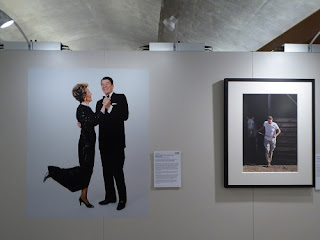 Troupers include Liza Minnelli,  Truman Capote, Sinatra and Farrow at the masked ball he organised, 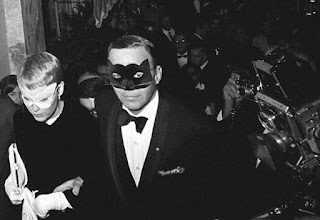 Warhol and Bianca Jagger together, Dolly Parton in superb silhouette. 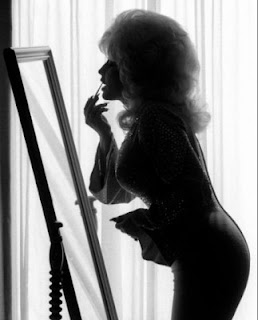 Two northern shots set the seal on Benson the photographer - one which captures the visionary side of Solzhenitsyn, and the other of Bobby Fischer among Icelandic horses on a lavafield  in between chess bouts in Reykjavik. 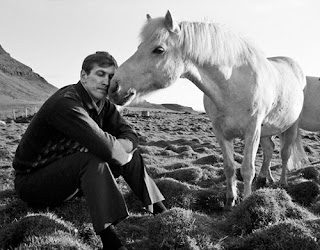 In such carefully chosen portrait scenes, Benson shows he's not just a photographer of circumstance. A true artist, I reckon.

What a pleasure to stop by at long last. I was particularly taken by the porcelain peas in a pod. A refreshing break from our current American nightmare.

It does seem ever harder to believe, doesn't it? After the latest breaking news, insignificant as it might be in itself, I thought I couldn't bear to read updates. Though of course I've returned with a horrified fascination. Let's hope a lot of people have voted already.