Don Giovanni: the beginning and the end 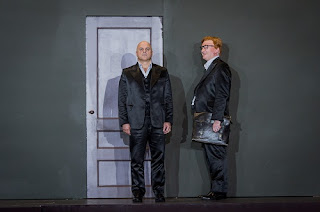 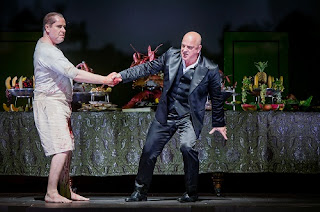 Or rather, after Mozart's Overture and before the survivors' final sextet. Aren't these two scenes - Donna Anna rushing out of her father's house with Giovanni in hot pursuit, and the libertine's final meeting with the statue of the Commendatore - the big question marks for any director today? Richard Jones in his typically challenging production for English National Opera, stunningly conducted by Mark Wigglesworth, approaches them very much on his own terms - the first, for me, questionably, the last with characteristic off-kilter genius. Production images above by Robert Workman featuring Christopher Purves, Clive Bayley and James Cresswell.

The sticking-point, in every production I've seen since Deborah Warner's at Glyndebourne, is (as I put it in the Arts Desk review) male directors' refusal to believe that when a girl says no, she means no; in other words to accept that Don Giovanni, in disguise as Don Ottavio in the dark, is essentially trying to rape Donna Anna when she finds out it's not her fiance and starts hollering blue murder.

In Tirso de Molina's The Trickster of Seville, the fountainhead of all Juans/Giovannis, there's no doubt in the first scene that Duchess Isabel believes she's trysted with Duke Octavio in the dark - Tirso doesn't exactly sympathise, since sex before marriage even with the 'right' man wasn't on in the Golden Age of Spanish drama - or that Doña Ana in Act 2 thought she was giving up her honour to the Marquis of La Mota (also a cad, incidentally), not a 'murderer' (and not just of honour, for of course it's her father, Don Gonzalo, who shortly gives up the ghost). 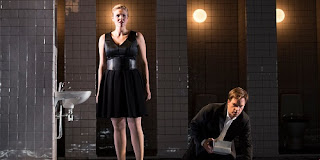 Is there any reason to doubt Donna Anna's vivid struggle in Mozart's music? The sheer energy of it was woefully at odds with Kasper Holten's decision to have Anna and Giovanni taking a pleasant post-coital stroll at the Royal Opera. We also got off to a sub-Bieito start in Ole Anders Tandberg's inept Stockholm production, with the two having sex in a toilet while Leporello peered under the door (the aftermath pictured above, I presume, by the same photographer whose images I used in the initial piece, Markus Gårder). Jones's sado-masochistic play while the Commendatore prepares to have sex with a prostitute next door may have been more convincing, but like those directors, he makes his Donna Anna insincere when protesting in 'Or sai che l'onore', and generally devious.

These are signs of our times, just as the sanctification of Anna as angel got the better of 19th century writers. And there's often a kind of implied sexism made implicit in the late William Mann's otherwise sound The Operas of Mozart when he writes that about Anna that  'it would be beneficial to her personal growing-up if she had been pleasantly raped by Don Juan (as some writers on Mozart's opera assume, I think optimistically).' Well, it hardly needs spelling out that there's nothing pleasant or optimistic about a rape. Why has it taken a woman to get it right? Only Deborah Warner at Glyndebourne has shown us a distressed rather than a relaxed or protest-too-much Donna Anna. That's still the production I admire the most. 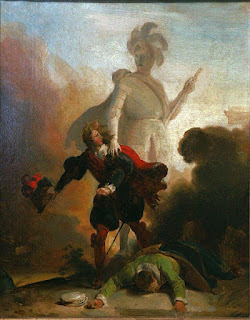 As for where to end, it can't be an option to remove the final gathering of survivors and leave it at Don Giovanni going to hell. A group of students for whom I put together a programme of music-history classes were sceptical about the epilogue until I showed them Warner's compelling final thoughts on the discombobulation of those left behind. Holten clearly never liked it; when I saw his Royal Opera production first time round, the voices came from behind a screen; for the revival , I gather, he cut it altogether. Jonathan Kent in the most recent Glyndebourne production seemed happy for cuts within the ensemble - hard to miss that final exchange between Donna Anna and Don Ottavio - while Jones keeps the full ensemble but has his own masterly solution. Which I'm glad to say no critic I've read so far has had the meanness to divulge.

Meanwhile, we've kicked off Don Giovanni at the Opera in Depth class with a preliminary circling-round, not least listening to some of Gluck's amazing music in his 1761 ballet. A fandango got reused by Mozart for the Act 3 wedding ceremony in Le nozze di Figaro, but the stunner is the final sequence, which gives us some idea that Mozart's Sturm und Drang didn't come out of the blue. Gluck transferred the final 'Dance of the Furies' to the Paris version of Orfeo ed Euridice, in which guise we find it here - sans the trumpets which make Bruno Weil's performance with Tafelmusik, the one I used, so exciting.

I prefer the Paris version of Gluck's O & E. The end of Che Faro is more impressive, and if I am right in thinking that the bravura aria " I go upon my way" was added for Paris

Depends on whether you've got a good tenor - Simoneau is so fabulous on a deliciously inauthentic old recording. I'd rather hear a convincing mezzo like Alice Coote - the best Orfeo I've seen - and that means the original. Not sure what aria it is you mean, and I don't have the versions to hand to compare.

Did you know that in 1972, as one of his gigs when he was cobbling together a hippie life in Vermont, Bernie Sanders wrote "a stream-of-consciousness essay on the nature of male-female sexual dynamics" that included this "lovely" thought: "A woman enjoys intercourse with her man — as she fantasizes being raped by 3 men simultaneously"? Of course he's protested since about what he meant. Even under the most charitable interpretation, he was clearly not competent to write about issues of gender, but felt privileged to do so, nonetheless. Somehow, it seems not so far removed from some of the flat-footed conceptions you describe here.

Why is it so rare (or so it seems to me, albeit from MUCH more limited exposure than you have) for the production to rise to the level of the music and performances? I just last week opened my Met Opera season with Tristan und Isolde. The singing was magnificent, the orchestra incandescent . . . and the production was just plain bizarre, with the third act going completely off the rails. They'd be better off scrapping it and doing a semi-staged performance, a la the best of Peter Sellars (who, as we know, can go off the rails, too).

To be fair, I do think that Jones is one of those rare directors who always listens to the music and draws the drama from his singers in a way that's never too disjunct with the score. His angle is always surprising, and for some reason with 'difficult' Don Giovanni there seems more leeway. I just don't agree with his concept of the Donna Anna-Don Giovanni 'relationship', but I buy everything else, including (crucially) the end.

The more I see of Wagner, the more I'm convinced his myths - as opposed to the 'real' world of Meistersinger - only need imaginative lighting and costuming, not much more. But he'll always be so much bigger than any production can make him seem. Anyway, it seems as if Skelton - the best Tristan I've seen on stage - pulled it off at the Met, and Stemme is always so secure.