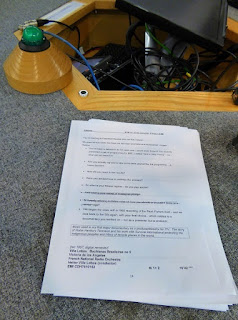 Just a quick one so I don't let the big day pass unrecorded here. I had the good luck to be in a studio of beloved Broadcasting House, Portland Place on Tuesday morning, recording the script for my Building a Library on Elgar's Falstaff (due for broadcast on Saturday 8 October). Before I lifted on to the table the ancient script rack of which I'm so fond, which seems to have made its way upstairs from the old days in Studio B14, I found pages left by the estimable Rob Cowan, Mensch and stalwart, whose seat I was occupying. You probably can't see the name on the top of the page, but it's his.

Having got everything 'in the can', I had a quick chat with my vivacious producer Olwen Fisher and sound engineer Michael Bacon about the status quo. It's just such a joy that recording BaL is exactly the same as it ever was - that's to say, you discuss the script and any tweaks needed with the producer, then go through recording it with all the music examples in place as you devised them. So in reading it you still get something of the right tempo and inspiring snippets to give your voice the necessary reactive kick. 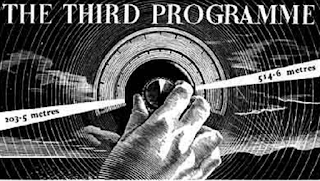 That hasn't always been the case elsewhere; some years back on the World Service, for instance, I had a discussion with Patrick Harrild, principal tuba player of the LSO, about our favourite recordings from the orchestra's first 100 years; we never got to listen to the chosen snippets of each other's choices, so we couldn't react properly. There have been moves to economise here too by trying to stop the full playthrough, but so far the Record (formerly CD) Review team have staved it off (and they don't think it would save much time anyway).

I rejoice, because that means studio work for Record Review is as it always was, with a civilized timeframe and knowledgeable folk as editors. It changed for the worse during the Gambaccini era, but they realised they were losing their core listeners and not gaining any of Classic FM's, so back it went to the old format and we non-celebrities came back in from the cold. 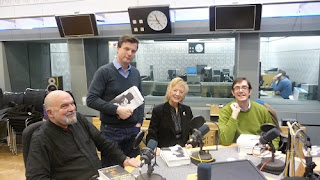 Which means it's been 29 happy years for me, starting with a review of Sawallisch's recording of Strauss's Die Frau ohne Schatten, with a few bumpy interludes thereafter, and some wonderful studio meetings, like the one above with the late, great Bob Tear - then aged 71 - and Elaine Padmore, Petroc Trelawny chairing. Topically, one of the three books we discussed was Susie Gilbert's excellent Opera for Everybody: The Story of the English National Opera. Once past the last two productions to be conducted by ENO's adored but honourably departing Music Director - Don Giovanni opening tomorrow night, can't wait, and Lulu - that particular story may go downhill rapidly.

But I digress. Returning to the subject of the 70th birthday celebrations,  I hear there are exciting things going on at the Southbank Centre, but I only saw an empty Radio 3 studio in a glass box when I went to Salonen's stupendous Philharmonia Stravinsky concert on Wednesday, so must find out more.
Posted by David at 16:25

Yes bbc3 is a great station.

It has given me so much pleasure and stimulation over the years.
Liam

Indeed - I think back especially to hearing my first ever Mahler, the Fourth, on R3 and rushing up to the local library to take out what I could find (which was the Resurrection, conducted by Abbado - the Haitink Prom followed). Funny how so many presenters have come and gone; I'm trying to remember the one who used to say outrageous things before closedown (Tom somebody?) and treasure his introduction to Roussel's The Spider's Banquet: 'I can't imagine what that would have been, something pretty disgusting, I imagine'.

I think he was called Tom Crowe. I remember him reading out an ad for the Open
University 'there are a wide range of courses-tch!-is a wide range would be better!'
Only on radio 3..

Well done, Paul - that sounds right. Gone is that special kind of spirit. He got away with murder around midnight....

Not only 70 years for BBC Radio 3, but 29 for you--that's quite a stint and more to come. Here's a favorite line in your report: "they realised they were losing their core listeners and not gaining any of Classic FM's, so back it went to the old format and we non-celebrities came back in from the cold." It's a pleasure to know that sometimes, just sometimes, things come out as they should. Though belatedly, I raise a toast!

It's sometimes quite startling to look back and see how one's sometimes held on by the skin of one's teeth. In fact there was a desert time for me with Radio 3, and it still seems either feast or famine, but no point complaining. I do think it's a shame to have to crank it all up after months of not contributing, though. Well, everyone is flavour of the month at times and not at others. 'I'm still here' is the torchsong that begins to ring true.