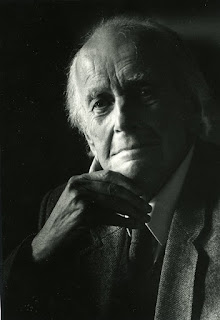 Not Swift, or probably any of the other names that spring readily to mind. I confess I hadn't heard of Hubert Butler until J came back from an evening devoted to him with a documentary I have yet to see at its core, clutching two of those beautifully produced books of essays which Notting Hill Editions do so well (I first read Thomas Bernhard in that format).

As a well-travelled multilinguist and a voice of Europe's terrible 20th century upheavals - he was born in 1900 and died in 1991 - Butler had a special angle to what he wrote. Hannah Arendt famously called it 'the banality of evil', and Butler - who sums up the essence of Eichmann in an essay if you don't think you can face Arendt's stupendous Eichmann in Jerusalem - puts it differently, time and again. 'It is the correlation of respectability and crime that nowadays has to be carefully investigated,' he writes in cool understatement. 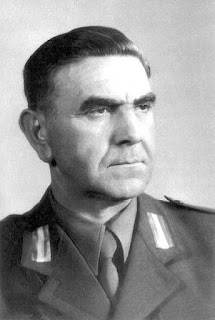 The figure and the constellations around him who seem to sum it up most closely for Butler are Ante Pavelitch (we now write 'Pavelić'; pictured above), 'probably the vilest of all war criminals', the Croatian fascist dictator and leader of the terrible Ustaše movement, his Minister of the Interior Andrija Artukovitch (Artuković) and the Catholic clergy, most closely a Franciscan order, complicit and active in their crimes.

I don't think I knew of the enormity of all this - Pavelić features as a cool monster in a work of genius faction with odd ties to Butler, Curzio Malaparte's Kaputt - but Butler states it coolly: in 1941 the Croatian government, dedicated to the extermination not only of the Jews but also of fellow-Christians, the Serbian Orthodox, 'introduced laws which expelled them from Zagreb, confiscated their property and imposed the death penalty on those who sheltered them. Some 20 concentration camps were established in which they were exterminated'. The figures are of 30,000 Jews and 750,000 Orthodox massacred, some 240,000 Orthodox forcibly converted to Catholicism. Even if these figures are exaggerated, it was the most bloodthirsty religio-racial crusade in history, far surpassing anything achieved by Cromwell and the Spanish Inquisition' (below, Pavelitch and Archbishop Stepinac, Butler's paradigm of 'an ambitious, rather conventionally minded Croatian' capable of plentiful 'twists and turns...to keep pace with history'). 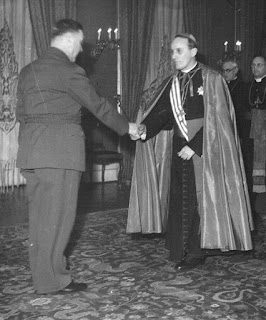 Butler's special line of inquiry - and he was ostracised by the Irish establishment for establishing the truth - was to find out how and why Artukovich spent a year being sheltered in Ireland. The Franciscans provide the connection, though those to whom he spoke seemed ignorant of Artukovitch's status as a refugee war criminal and had, along with most clerics in Rome, 'been highly confused by what was happening in Croatia' (but this is an ironic swipe, because he goes on to point out that only one man in pursuit of the truth, Cardinal Tisserant, 'had a clear idea').

The gist is that 'if Artukovitch had to be carried half way round the earth on the wings of Christian charity, simply because he favoured the Church, then Christianity is dying. And if now, for ecumenical or other reasons, we are supposed to ask no questions about him, then it is already dead'. Butler enlarges on this in an early 'Report on Yugoslavia'. Deploring the 'hysterical adulation...poured forth by almost all the leading clergy upon Pavelitch', he adds:

As I believe that the Christian idiom is still the best in which peace and goodwill can be preached, I found this profoundly disturbing. I doubt now [1947] whether it is even wise for us to use the language of Christianity to the Yugoslav till all the vile things which were said and done in the name of Christ have been acknowledged and atoned for. I think the bitter hatred which is felt for the Churches in Yugoslavia is inflamed by all the lies and dissimulation about these things, by the refusal to admit that the Christian Church during the war connived at unspeakable crimes and departed very far from the language of Christ. 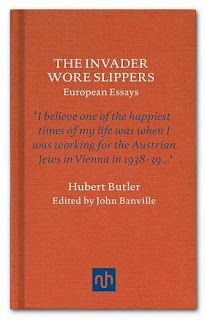 And in the central essay which gives Notting Hill Books' volume its title, 'The Invader Wore Slippers', he returns to the issue:

I felt that it was not the human disaster but the damage done to honoured words and thoughts that was most irreparable. The letter and the spirit had been wrested violently apart and a whole vocabulary of Christian goodness had been blown inside out like an umbrella in a thunderstorm.

The wider point being made in 'The Invader Wore Slippers' is how 'the moral problems of an occupation' turn out to be 'small and squalid'. Ordinary people are expecting jackboots; 'the respectable Xs, the patriotic Ys and the pious Zs' are unprepared for 'carpet slippers or patent leather pumps'. The Guernsey occupation is elegantly left to speak for itself - 'events for an October day in the first year of occupation [in the Guernsey Evening Post]: "Dog biscuits made locally. Table-tennis League of Six Teams formed. German orders relating to measures against Jews published. Silver Wedding anniversary of Mr and Mrs W J Bird."...Lubricated by familiar trivialities, the mind glided over what was barbarous and terrible.' 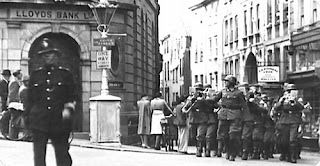 Not that the occupiers aren't skilful at winning complicity by double games. At one point Hitler is quoted on how to use the Church as his propagandists: 'Why should we quarrel? They will swallow anything provided they can keep their material advantages'.

Depressing instances abound. But Butler sees hope in the behaviours of small nations in which 'the Wicked Man is not yet woven so scientifically into the fabric of society', citing the ways Denmark and Bulgaria found to evade giving up their Jews in the Second World War. He praises the local community spirit, and in a long, brilliant interlude, 'Peter's Window' writes of his time living with a Leningrad family in 1931. Normality is celebrated, but its obverse is warningly inserted:

These are the things we talked about in Leningrad in 1931: spoons, buttons, macaroni, galoshes, macaroni again. I don't believe I ever heard anyone mention Magnitogorsk [pictured below: Komsomol meeting there the same year] or the liquidation of the Kulaks or any of the remote and monstrous contemporary happenings to which by a complicated chain of causes our lifestyle and our macaroni were linked. 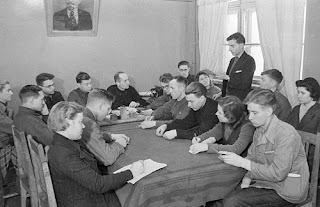 At the end of that decade Butler was in Vienna working frantically with those admirable people the Quakers - he was not one himself - to find as many Jewish citizens as possible places abroad. He writes that, strangely, he was happy because all his faculties were engaged, and 'most people tied to a single job or profession die without exercising more than a tenth of their capacities'? The essay, after giving a devastating portrait of an Austrian Butler brought to Ireland, wheels round again to questions of the Catholic Church's role in World War 2.

So, an admirable man who acted in the maelstrom. But we wouldn't read him if his style wasn't so pure and, in its elegance, so capable of the sudden devastating sideswipe. His writing is the polar opposite of Patrick Leigh Fermor's flowery prose, and though I find the precision hard to emulate as an incorrigible sub-Jamesian, I salute it. Now to the volume of Ireland-based essays, The Eggman and the Fairies.
Posted by David at 14:38

One should keep in mind that the records of the several parties on the Jewish question during WWII are extremely varied in their reliability. Thus the Church under Pius XII worked actively where there was leverage, to modify and where possible stop the transfer of Jews to the death camps. The Pope gave explicit orders in the relevant directions

The resulting contacts between the papal nuncios or the local archbishops with the various dictatorial regimes were easily misinterpreted by those who saw any contact with the regimes as wrong. According to Jewish historians, hundreds of thousands of Jews were saved in this way.

Not in the case of the Roman Catholic Church in Croatia, which is what we're dealing with here. I suggest you get hold of a copy of this volume for chapter and verse, but these two details will do: 'When Pavelitch first entered Zagreb in 1941, the Church bells rang and Te Deums were proclaimed by the Primate. When he left in 1945, driven out by the partisans, it was under the floor in the Franciscan monastery in Zagreb that the State Treasure was hid, in the hope of a victorious return. It included boxes of jewellery and gold watches and gold teeth, stripped off the victims of the concentration camps'. There are more disgusting details including the one of the Franciscan who was rewarded for cutting the throats of over a thousand Orthodox. But like I said, read the book.

I would note that many of the reports - even whole books such as that by Avro Manhattan in the Croatian context - of actions during the war are in disagreement with each other - and references tend to be circular, to support a case. This is especially the case when local passions run high ( Orthodox versus Rome, still alive today). One has to read half a dozen reports before being sure. There were indeed some prelates who acted in ways which were awful. The Vatican took immediate and strong steps to correct that - notably in the case of Austria, where the immediate reaction of the local hierarchy was to welcome Hitler ( flags etc) when he invaded - the Cardinal was given the greatest condemnation in Rome. I suppose that I have read dozens of papers etc on the actions of the Vatican during the war, and the record, contrary to general opinion, is excellent. So I am careful before coming to conclusions as a result of one source. My interest is in the reputation of Pius XII as he has been criticised without justification

So better to read the book first and to stick to the points I'm echoing.

All butlers essays are beautifully written.

Yes, Liam, that's more the gist of it. Put pressure on Sir David to read him.

There was a time when I would have read this post with keen interest, yet not feel it struck so close to home. "I felt that it was not the human disaster but the damage done to honoured words and thoughts that was most irreparable" couldn't help but to remind me of the snake-oil salesman masquerading as a choir boy performance of the Republican VP candidate here in his debate. Lie after lie, all with not just a straight face, but a veneer of gentility, too. There was one thing that caught him out, at least for me: as he lied, he often looked down and squinted, so that one could not look into his eyes.