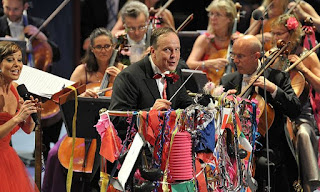 Certainly not that, or rather not just that. The ghastly Bill Cash just reveals his ignorance by saying so. First, the Last Night is a celebratory party for everything that's gone before, all 74 Proms in the Albert Hall. Which began with Russians (Tchaikovsky and Prokofiev) and an international British master (Elgar) between them and has seen the visits of three outstanding German orchestras in the past week (below, Thielemann and the Staatskapelle Dresden - the image, ahem, is by Thielemann's approved photographer, Oliver Killig; thanks as ever to the wonderful Chris Christodoulou for the rest). It also includes French and Italian music in the finale, sung by a Peruvian tenor and conducted by a Finn. 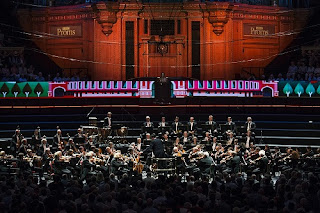 Indeed, Sakari Oramo (pictured up top) donned a Union Jack waistcoat for the second half of a previous Last Night, and has championed British music, G&S included. But he's as splendid an example of international versatility as anyone who's appeared at this year's Proms.

Crowdfunding supporters have raised enough money for 500 EU flags to be distributed tomorrow night. Of course the disgusting, immigrant-persecuting Daily Mail and Express howl that it's a Corbynist conspiracy - unlikely given his own disappointing if not entirely unpredictable take on the EU - and the Brexiteers wail foul play. But it's our turn now after years of attack from the lunatic fringe. 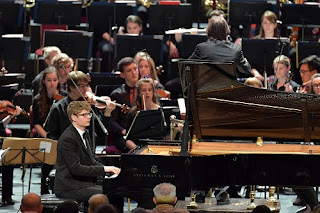 I won't be there - as on every occasion for the past 10 or more years, we'll be walking for the Norfolk Churches Trust. I'm privileged enough to be admitted to a final rehearsal of the Verdi Requiem before we catch the train tonight; had to hear something of the great Tamara Wilson. If I have to pick my favourite Proms of the ones I've managed to attend, the internationalism speaks for itself: London-based Russian Pavel Kolesnikov with the National Youth Orchestra of Scotland conducted by Israeli Ilan Volkov in Tchaikovsky's Second Piano Concerto (pictured above), a Finnish diva (Karita Mattila) and a Czech conductor (Jiří Bělohlávek) leading a stupendous performance of Janáček's The Makropulos Case 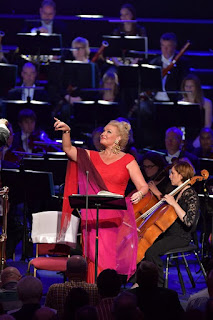 and the Berlin Philharmonic conducted by 'our own' Simon Rattle in Mahler's Seventh Symphony. Oh, and if you want more Britishness, there was Mark Wigglesworth conducting Welsh forces (and American Wilson superb alongside UK soloists, having made her first partial and compelling test of the role of Brünnhilde) in Tippett's A Child of Our Time. No doubt which kind of flag Sir Michael would be waving tomorrow night.
Posted by David at 12:19

Dear David,
Might you be free this Monday night to come along to Cadogan Hall for a wonderful "Barber of Seville" set in the Italy of the 1950s? A young artists' festival production of the most beautiful comic opera ever written! https://www.cadoganhall.com/event/the-barber-of-seville-160912/
Many thanks!
Gaetano Lo Coco
Music Director
Rossini 2016

Sadly not, Gaetano, but I wish you well and leave the comment so that others else can see it and go if they're interested and able. Must remember to keep Cadogan Hall on the map - they don't send publicity to The Arts Desk as a matter of course.

PS - I think Rossini would have to concede that the 'most beautiful comic opera ever written' is Mozart's Le nozze di Figaro...

Intolerable that Brexit types should try and recast this event with blinkered politics in mind. Your rundown of favorite concerts puts the lie to it, as would the whole schedule. I hope the EU flags did fly at the event.

They WILL - it's tomorrow (Saturday) night. Tonight was the Verdi Requiem with Tamara Wilson. I heard the 'Libera me' in rehearsal, and all I ought to say is that the colours she drew in a single minute were unbelievable.

(Sir) Nicholas Kenyon has been trolled for his piece on the internationalism of the Last Night. Sakari Oramo tweeted his support for him and for a 'post-Brexit Last Night'. I do hope he makes a strong speech. Should be interesting - we'll maybe tune in from Norfolk.

I hope you did tune in! I thought it was a wonderful celebration of the Proms and the combination of the Beeb and Albert Hall in creating such a vast festival every year must be unparalleled, and I'm so proud that this little country can punch above our weight on the world's music stage. If Britishness is combining talent, tradition and pure fun and bursting the balloon of pomposity with the biggest possible pin, then bring it on. Apart from the awful dirge of the National Anthem (although interestingly arranged and superbly performed) the sequence of Arne, Elgar and Parry and the hackneyed but nonetheless beautiful Welsh, Scottish and Irish anthems was joyous and beautiful and without a shed of jingoism, except as pure parody. Not only can a Welshman produce the most hauntingly English Hymn to Music, but the silliness of Juan Diego Florez's 'international' costume was a touch of genius. His voice is amazing too, and the South American medley was terrific. All praise to Sakari Oramo and the BBC SO for some pretty authentic latin rhythms.

We saw the beginning and bits of the second half (WiFi reception in Norfolk was patchy). Seemed a more bitty Last Night than ever, but The Banks of Green Willow and Polovtsian Dances were respectively poetic - super flute, clarinet and oboe solos - and racy (fast speeds from Sakari, as for Pomp & Circumstance 1). Had forgotten how nauseating much of Part Two can be. And swivelling to Belfast, Glasgow and Cardiff smacks of tokenism (after all, it was never their last-night party).

The relish with which the ghastly words of 'Land of Hope and Glory' and 'Rule, Britannia' were bellowed stuck in the craw. We really can't justify those sentiments any more. But I was glad to see Sakari making such a clear speech about music's internationalism and the way it connects people.

The one I need to see through in its entirety is the Verdi Requiem from the penultimate night. 'Tammy' did not disappoint in the Dies Irae, though I'm in two minds about using a youth choir. Wonderful experience for them, though.

Can Flores sing anything which is not in the style of The Daughter of the Regiment? Maybe his voice will" mature" ?

No - that's it. Good at what he does but I can't sit through a whole CD of arias. The personality was the thing for the Last Night, and from what I saw he struck the right tone.

Watched the entire Verdi Requiem performance through last night. Wilson is an artist in every bar she sings. I also liked the mezzo, Alisa Kolosova, who launched into a luminous Lacrimosa and had good rapport with TW. The men committed and dramatic but not quite secure in techniques. The choir - good to have a youth ensemble for the cameras, obviously not idiomatic but committed. The orchestra - poor, as they had been under Alsop for a dreadful Proms Brahms One. The cellos just didn't sing at the start of the Offertorio, the oboe sounded amateur in the worst sense in the 'Ingemisco' and the timps way too loud, in telly balance at any rate, at end of Sanctus. Otherwise, weak and not in the zone.

Before Emirates shamed other airlines into putting on proper classical music, British Airways had a tape consisting entirely of andantes. Ugh. Rather like gorging oneself on one chocolate cream after another. I think even a CD of Flores arias would be preferable

Andantes or Adagios? There's more room for contrast in the former. I remember Abbado pursuing DG for the unapproved excerpting of slow movements from his Mahler symphonies recordings. Quite right. Though I think the Adagietto from the Fifth, and various arrangements thereof, might be permissible (though it's still better in context, forming a pair of movements with the Rondo-finale, which quotes from it).

I don't see why a celebration of Britishness cannot go hand in hand with a celebration of international brother- and sisterhood (no chance of me committing a naughty -ism there!) We need to maintain a healthy, balanced perspective on these things. Personally I find that "bien-pensant" liberalism can be every bit as extreme and intolerant as jingoism. Sorry to be discordant but sometimes somebody needs to hold a mirror....

Didn't I imply just that in the first line? I had no problems with the Union Jacks fairly balanced with flags of all nations (and plentiful EU representation). The imbalance came before the event itself, from the right-wing press screaming (anti) blue murder. The Mail and Express stir up division on a daily basis and shouldn't be tolerated. As it happened, everyone seems to have behaved well and you wouldn't have known there was an issue.

I agree with your lines of thought, David. I would add that bien-pensant liberalism - aka political correctness - is indeed exhaustingly intolerant. On the other hand, when I look from time to time at the Express, the Sun etc I am amazed at their crassness......I can hardly believe that they are really writing what they write. But there is a difference. Those papers say what they say and attack those of other views. The politically correct do the same but with the addition of a moral superiority which, even if it is applied to a valid argument, is not admirable.

Needless to say I slightly bristle at Jonathan Smith's implication that I am a 'bien-pensant' liberal (not to mention his IMO smug idea that he's holding up a mirror). But I'd much rather be a BPL than a jingoist. It's like Clinton v Trump - there is just no comparison between a serious, experienced politician and a hate-mongering demagogue with no policies. In this case, the 'bad binary' is between the cynical manipulation of the Murdoch press and allies and the indignant extremes of, say, Owen Jones or (occasionally) Polly Toynbee and George Monbiot. I'd still go with any of those, for all their faults (and I did find it irritating that OJ has covered all tracks of being a pro-Brexiter in the early days).