Weekend Deal: a room with a view 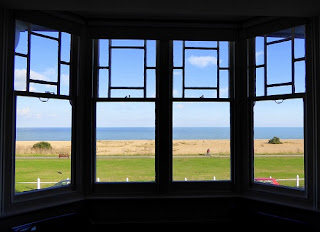 Grass, shingle, sea and sky from the first floor window of friends who have a house at the Walmer end of Deal. We spent a happy time there over the second October weekend just after my return from Edinburgh (which meant we didn't go down until Saturday morning). And 'A Room with a View' is not inappropriate, at least as far as the Coward version goes. He turns out to have been the intermediary in the salvation of what is now Deal's conservation area, a warren of small houses and lanes between the sea front and the High Street.

In short, Charles Hawtrey lived here in what by all accounts were his bitter and acid later years. There's a plaque to prove it. 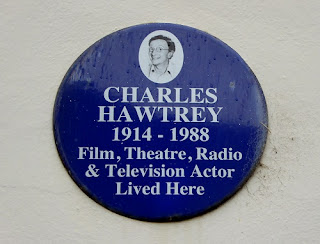 and I'm afraid that I am playing in the below image to J's insistence that I bear an uncanny resemblance. 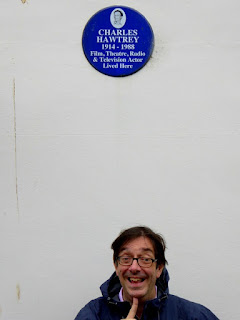 When the area came up for a potential second demolition after World War Two, Charlie got on the blower to his good friend Noely, who had a place just down the coast. And Noely had a word with his dear pal the Queen Mum, Warden of the Cinque Ports. She loved Walmer Castle best of the royal homes, apparently, and who can blame her? 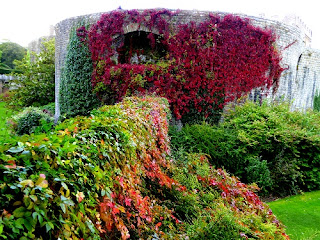 So by royal command the place was spared and seems safe in perpetuity. We learnt this from another part-time Deal resident, with whom we had a coffee before Sunday lunch. His partner's mother finally twigged what sort of a place it was from the large number of gentlemen out walking chichi little dogs. It has long been thus thanks to the presence of the Marines, whose time here was of course marked by terrible tragedy when the IRA bombed the bandstand and 11 lives were lost.

Anyway I've never seen more little dogs in one place than along the promenade between Walmer and Deal, which we traversed quite a few times. I sorrow to say that dog poo is a rather predominant smell, as the second notice down on one of the fish huts makes clear. 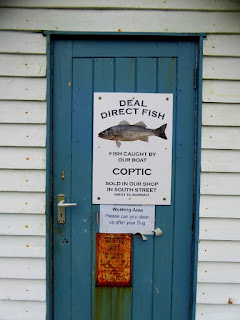 That apart, it's delightful to stroll up and down (a plan to head for St Margaret-at-Cliffe on foot was abandoned owing to the last weekend over which I had to endure the persistent pain and trouble of my stent - now removed, so we went on a long walk along the Pilgrims' Way yesterday). 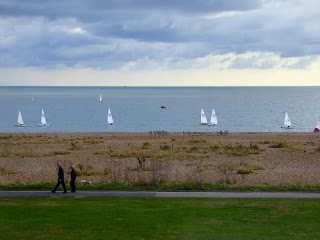 Our first Sunday stroll was Walmerwards, shared with a group of local walkers young and old, 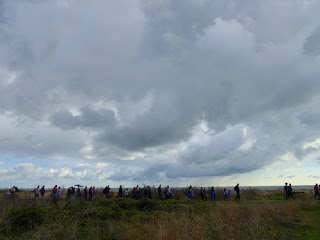 all the while admiring the clarity of the French coast 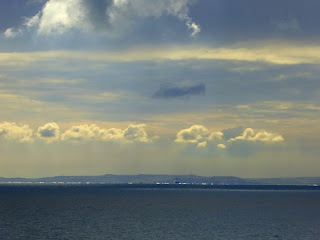 and spending all too short a time around Walmer Castle due to the social schedule (I went round it as a kid during annual Whitsun weeks visits with an aunt's place at Tankerton as a base, and still remember how cosy it was for a castle). A circumnavigation of the outside, at least, was possible. 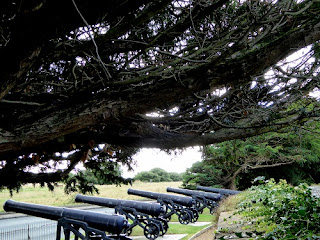 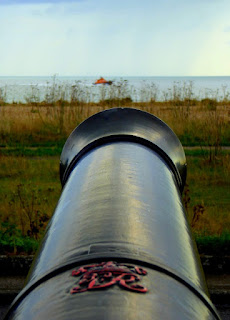 Then it was back and onwards to Deal itself, passing the various flotsam and jetsam around the white huts 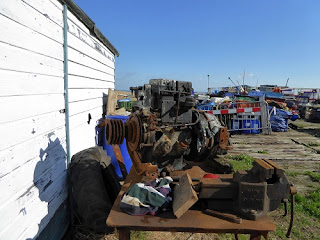 and the remnants of weekday sales 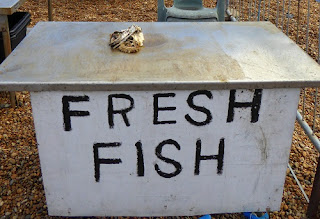 plus some more picturesque views out with old boats 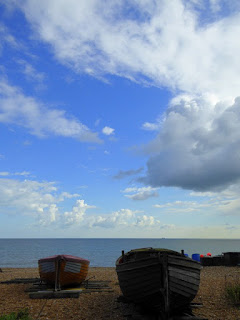 and of course Deal's own, more hemmed-in castle 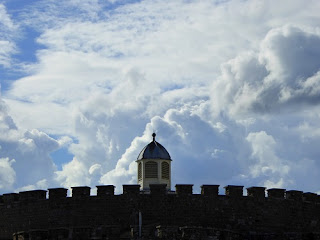 and a few incidental seaside pleasures like the old cinema, which has had some enlivening murals added 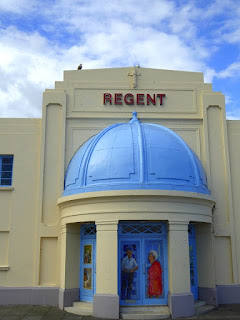 until we eventually looked along this side of the channel towards the white cliffs of Ramsgate. 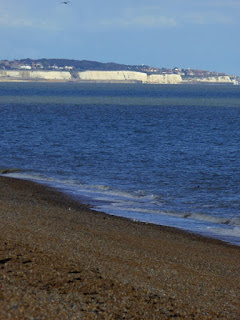 After a leisurely lunch back at the Walmer end, I took yet another walk in different, later-afternoon light 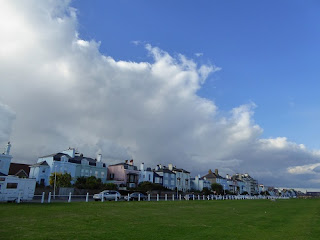 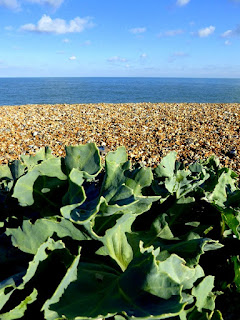 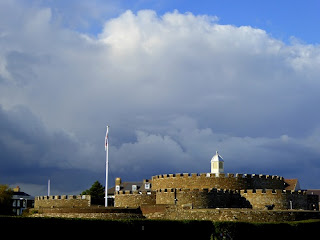 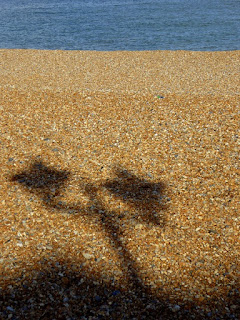 to meet the others at the celebrated Deal Beach (Ice Cream) Parlour, this time to be reunited with the youngest goddaughter, Mirabel aka Dancing Delice, along with her ma and pa. She was got up in her best Alice gear owing to the bond we now share with Lewis Carroll. Here she is with dad Kit at the celebrated Ice Cream Parlour 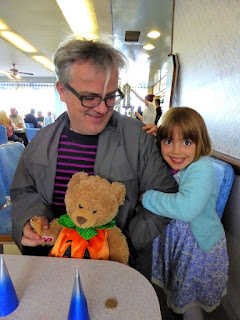 where immense fun was to be had from the 20p plastic eggs with gifts inside laid by a twirling musical hen. And similar simple pleasures followed simply by throwing stones into the sea (not even any skimmers) 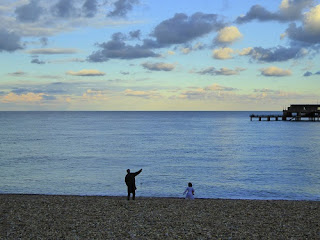 and inviting some unfathomable rushing up and down game with this particular teddy (alas, not Special, who never leaves Aunt Choppy's sight) 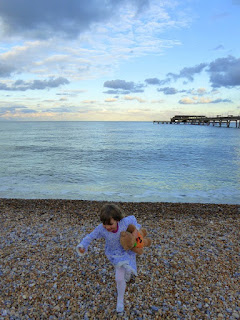 while J and Edwina took a spin along what must be the ugliest pier in Britain - but a pier's a pier for all that, and they saw some amusing spectacles. 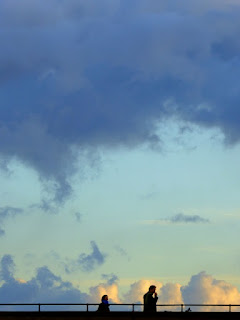 This slice of London by the Sea has plenty of delights; even if I associate looking at the sea with waiting for the end, the shifting skies over the channel could keep me amused for days on end.
Posted by David at 09:17

I do so enjoy going on vacation with you both! You don't look at all like Charles Hawtrey!

I can see you two and the Hounds from Hell settling in nicely there, though you've found your own little artsy community by the sea...

And thank you, I don't think so, though I have approximated the look surprisingly well there, I reckon.

Though you may not look like Hawtry, the photograph was a hoot. What struck me most of all about these lovely photographs were the cloud formations. One beauty after another. Thank you for the travelogue!

Yes, the clouds shifted all Sunday, though there's a difference in the light depending which direction the camera's favouring.