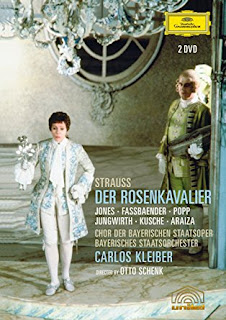 After comparison in the Opera in Depth class yesterday between fast Rosenkavalier Preludes (Strauss in 1926), too slow for the parodied sexual agitation the composer asks for in the score (Karajan in 1982) and censored (Kempe taking the Prelude as opener to a 'waltz sequence' and shedding the horn-whooping orgasm), plus multiple illustrations of all the little gems in the first scene, we settled down to watch the first 20 minutes of Carlos Kleiber's 1979 Munich performance. Brilliance from the off (CK's entrance is about 1'40 in).


You can watch all of this if you like (no subtitles, unfortunately, though Fassbaender's plausibility and Jones's beauty should carry it), but I've put it up just for the sake of the first couple of minutes to recommend that you witness the most flexible conducting of all time - as far as I know - in action. Abbado followed in the master's footsteps for unfathomable suppleness, and daddy Erich's recording is still a stunner, but this Prelude - and indeed the lively pacing of the whole - is pure gold. I'm also getting hold of the Vienna performance on DVD since that great lady Felicity Lott is coming to talk Strauss with us on the 30th, so we need to see how she and Anne Sofie von Otter work together with great Carlos at the end of Act 1. Her capacity to move is a given; I always melted at that point every time I saw her in the role at the Royal Opera. Meanwhile, more quickening of the pulses with CK should be the order of the week between work. And here's a gem of exquisite agony which shows him taking a car-crash from the stage lightly as the Baron Ochs and male semi-chorus f*** it up towards the end of Act 2.


We'll be lucky in choosing only the best. This Straussian joy for the next six classes at least is such a bolster against the unfolding horrors of our age. As for my free offer of a scenario for a sequel to Shostakovich/Gogol's The Nose, the image of Nigel back from his time in Trump Towers' golden-showers lift and hauled off at Heathrow with a mysterious immovable brown stain on his conk could now equally well apply to Gove. Not that one should really be giving these pygmies headspace.

In the meantime, if only Las Vegas socialite Sari Bunchuk Wontner were still alive to give her immortal Violetta at Trump's inauguration concert. Filth for filth.

Carlos Kleiber such a treat. Thanks for including the DVD - led me to spend ages dipping into Charles Barber biog (you know it? - Corresponding with Kleiber)- lovely Rosenkavalier story about him leaving little hand-written 'exact instructions' on his players' music stands ... eg TAKE NOTE HORNS (I,II & III) Act III, 4 before 22 ... Please do not hurry the 12/8 etc but place them very exactly toward "2" and "DC" ... etc.etc. With best wishes and regards, Your C. Kleiber.

No, Dilys, I dont know the biog and must get it immediately in the middle of my C Kleiber binge.