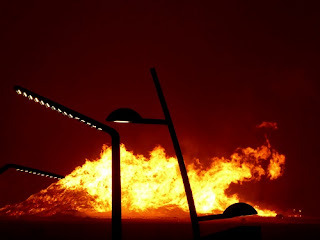 It was a bit of a jolt, coming out of a friendly New Year party of seven - gezellig is the Dutch word for such a happy time, a less overused equivalent to 2016's Danish hygge - and heading at around 2am for the promenade at Scheveningen with its eight-mile sandy beach. I'm sure our lovely hosts Cornelius and Marina, great people doing fine work for the world, and their daughter Emma won't mind a contrasting shot here, with friends Machteld (Max) and Nick left and right and J's legs, just to show what we left behind. 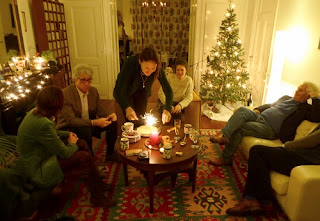 After an inadvertent tour of The Hague, Max drove towards the big bonfire Scheveningen holds every year, but the harbour routes were blocked. Which meant a detour through a slightly scary-seeming part of town - deserted braziers flickering in a cul de sac of rather mean-looking houses by egalitarian Dutch standards - before she could park the car to let us get out and overlook the beach. I had that urge one gets when spellbound by big blazes to walk down and get a closer view. 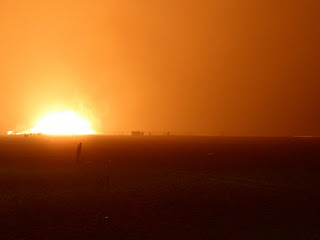 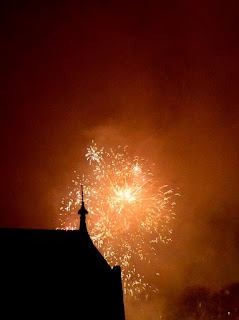 had been spent, leaving a red mess underfoot 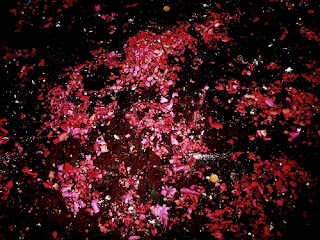 and the champagne, too, had been consumed 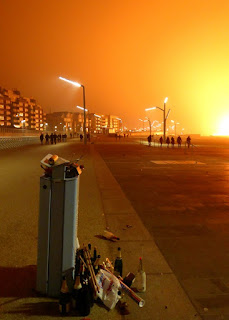 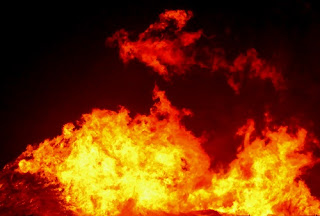 and I guess it was only possible in an open space of this magnitude, with folk still walking along the sea's edge (don't ask me why this untouched-up red is so pronounced). 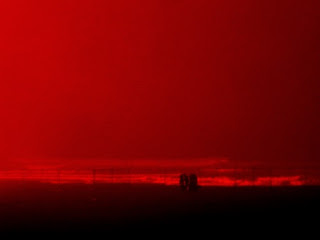 The impression will remain, pictures regardless: a sort of paradigm for our current uneasy time of coming out of our bourgeois comfort to face an angry world (with shades of Brunnhilde's purifying Immolation at the end of Gotterdammerung). Having looked up a report of the full event, I see that the pre-fire pile-up, which always has to be the highest in the Netherlands, is even more substantial, a tower of wooden crates: have a look at this report. Meanwhile, here are a few seconds of fire in action.


Would love to have seen the following morning's ritual, where thousands of swimmers in orange caps rush into the freezing-cold sea. But Amsterdam called; we got back at about 4am, where godsons Frank and Charlie were winding up a modest party. Here's another domestic shot of gezelligheid at the apartment on the lovely Sarphatipark, where the boys are working on marking in their many travels on a big map (mother Max has worked for KLM for many years now). 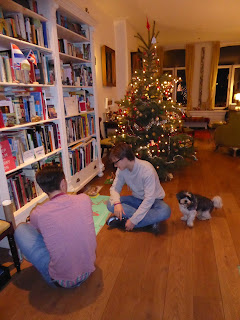 And a morning shot of adorable li'l Johnny, an engaging cross between Shih-tzu and Maltese Terrier, in one of his two favourite spots. The fireworks had rather traumatised him, and the crackers were still going off the following day. 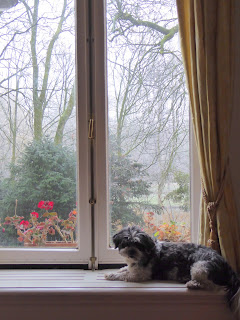 I owe hopefully not too laborious accounts of our first-time excursions to Delft, Den Bosch, Gouda, Utrecht and the enchanting village/town of Buren on the only sunny day of our stay. But let's end this one with our New Year's Day trip to the Rijksmuseum, to see the transformation and more of the collections. 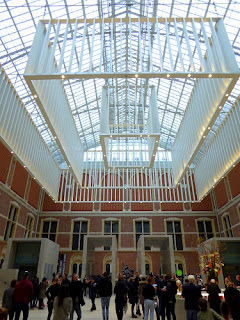 There were some stunning, unpostcarded objects I want to picture here eventually, but let's stick to two which are topical, from the new medieval and Renaissance galleries on the ground floor. As yesterday was Epiphany, how about this carved-wood riot of Magi and attendants from Adriaen van Wesel's altarpiece in the Chapel of the Confraternity of Our Lady, St Janskerk, Den Bosch? 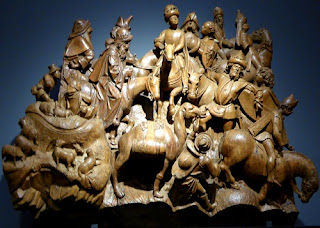 And as a symbol of sorrow for the woes of our world, here's a Mater Dolorosa in the centre of the gallery. 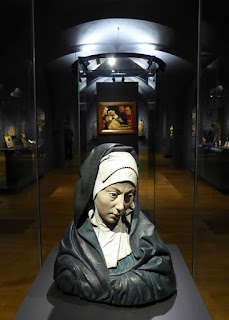 Despite such pensive moments, it was a happy way to spend three hours of an otherwise lazy day between late rising and more gezellig gatherings with Max, her two sisters Eline and Dorette - friends we've known almost as long as Nick and Max - and Orfeuo, travelling in from Arnhem to see us, at the Concertgebouw Cafe.
Posted by David at 09:09

Happiest of New Years to you and the diplomate. Sadly our only glimpse into the Rijksmuseum was several years ago when it was still under renovation. But I do have the good fortune of seeing a corner of it through your eyes.

And to you both. The present Rijksmuseum displays are more hit than miss, but there's some rather odd misalliancing between history and art. More of that anon. Today I found myself in the V&A and looked at the 1600-1800 European galleries which are even more remarkable - lots of fine Dutch work there.

Best wishes for the New Year.

Lovely to read of the boys marking up their travels on a big map. I didn't think people did that sort of thing any more.
After my sister joined BOAC (yes, that long ago), I had a big map on the bedroom wall and threads linking London to pins stuck in all the destinations she had flown to.

And to you, Catriona - delighted you chose that pic and account on which to comment. Of course at their age I'd have had pitifully little to mark up - a cub scout group 24 hours in Belgium, a school trip to Switzerland. But for the next decade, having got the bug, I never stopped when I could afford it. Which reminds me to write up the InterRail exhibition held at Europe House, put together by artist Paul Ryan.