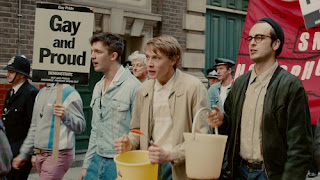 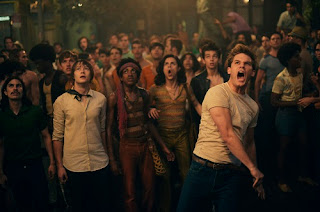 It was more or less coincidence that we happened to watch two similarly-themed films from 2015 on our return from the Netherlands. Unquestionably the better is Pride, distinguished director Matthew Warchus's take on the unlikely coming-together of gays and miners in the 1980s when queer- and union-bashing were rife. Stonewall, on the other hand - and it can be dismissed very quickly - is a fairly crass take on the uprising on Christopher Street that changed gay rights for ever.

The problem with Stonewall is that the cute white boy is the hero, and there seems to be some sort of condescending attitude to 'sad' trannies and drag queens. Never mind; better that it get some sort of mainstream exposure than none at all. 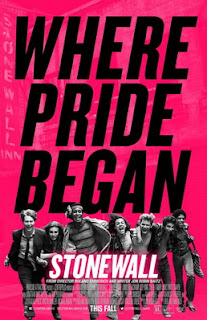 My point here is about connecting in the face of the most frightening political appointment - at least in terms of consequences for the world at large since the 1930s (or the 1990s, if you include Putin, as I think we must - but for Putin to carry out his plans of sowing discord in the west, he needs powerful accomplices). Whatever your reservations about the re-telling of Pride - and a well-known director with whom I shared a coffee the other day says he remembers visiting the Brixton Fairies' hangout, and that they were much less cuddly and rather more damaged as individuals than their screen embodiments - you can't deny it happened. The miners really did turn out in force to join the Gay Pride march of 1985, and their union really was instrumental in pushing for gay rights in Parliament. This article with a number of interviews is excellent on what really happened. 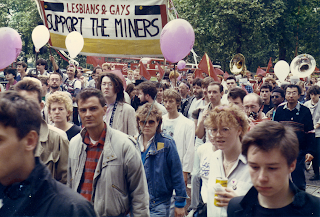 The fact that the miners failed in their quest, and that maybe things fell apart afterwards, doesn't signify. What's important is that people from completely different walks of life got to know and, to a certain extent, to understand each other. Empathy, compassion: for me, that's the point of life. Advance or retreat into apparent comfort which is really a state of fear.

Interesting, incidentally, if not exactly troubling, that the participating stars, Imelda Staunton (first-rate as ever, utterly believable) and Bill Nighy (actually playing someone else, and amazing me), get centre billing, as it were, in the UK poster. 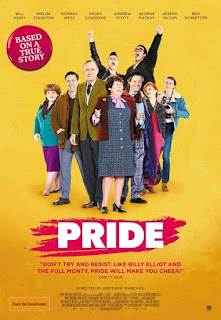 while the folk really at the centre of it all appeared on posters in Germany, Turkey and elsewhere (where possibly Staunton and Nighy weren't exactly household names anyway)*. 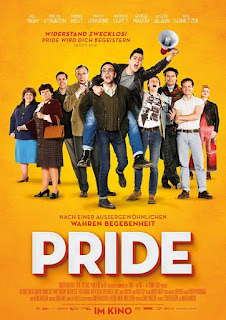 Anyway, as the sun leaves the Oval Office and pitch-black moves in, I want to post the two shorter films which are worth replaying, as much in terms of a fridge-note to self as so that others can see them. Saturday Night Live's script-writers hit new heights in this parody of the infamous press conference


while Nathan Lane, Matthew Broderick and Cloris Leachman kicked off what I hope will be the first of many re-writes of The Producers. Expect 'Springtime for Putin' soon.


As we're at the bottom of the piece, here's an appropriate cartoon from the genius that is Steve Bell.

*update: my Arts Desk pal Graham Rickson writes:  'just read your blog, which reminds me hearing about this, and how "London-based" replaced "gay and lesbian" in front of the word "activists" on the DVD sleeve'.
Posted by David at 14:14

I'm sure I first heard the Pride dvd stuff on the R5 Kermode/Mayo film podcast a while back. Essential, fun listening - listen to it on iPlayer or download it....

I would, Graham, but I''m very mildly allergic to slicker Kermode.

Keep in mind that the National Union of Miners ( but not all their members) used force to insist on preventing any change in the mining industry ( no closure of any pits even if loss making), corralling wealth for themselves and draining wealth from the rest of the country

Completely irrelevant here, you incorrigible Thatcherite. Just celebrate what I've written about, can't you? Not a good day for the negative.

And taking your point about a negative day, I am quite exceptionally hostile to Trump but what he said in his address is EXACTLY what people who voted for him want, and many who did not vote for him ditto. I would argue that most of what he and those voters want is just the natural evolution of the economy.

No idea what you mwan by the remark re Steve Bell's cartoon, but my blog, my rules.

I neither want to hear nor care what Trump said in his address. I can get any information about him in pithy summaries by those sources I respect. This man deserves no respect and no listening to. There is no evolution here, just an aberration, a swing of the pendulum before it swings back again. Monstrous.

Any retelling of the Stonewall Uprising story that does not honor the drag queens who were the first to assault the police is inaccurate, period. Unfortunately, the attitude carried over into the genesis of the Gay Liberation movement. The groups that were founded, particularly in New York City, to protest, push legislation, cause change of any kind, were essentially all-gay male activities. Lesbians were not welcome, drag queens were not welcome, it was gay guys all the way who were to be in control.

Fortunately, that didn't last but beginning with discrimination was unfortunate. When my late husband Fritz arrived in Hew Hampshire in 1972 to develop an Educational Conference and Retreat Center, he founded the New Hampshire Coalition for Lesbians and Gay Men -- not only including women but, rare for the time, putting them first.

So good to hear from t'other Will, a true pioneer. If I remember right, we did communicate briefly and I was so sad to hear that Fritz had died. You've seen this rather glossy film, I presume? Needless to say the pretty white boy is the one to hurl the first brick. I fear the film's attitude to drag queens is what mine, in my semi-closeted days, was: they're a bit sad and tragic, not really us. Thank God I know better. Paris is Burning was a revelation, RuPaul's Drag Race really does shout glorious pride, creativity and defiance. Trump can't take that away.

The British film Pride, as I wrote, is better - inevitably cosmeticized to a degree, but what happened in outline is faithfully reported.

Have you gone back to blogging? I thought you'd stopped, but need to have a look. All best to you.