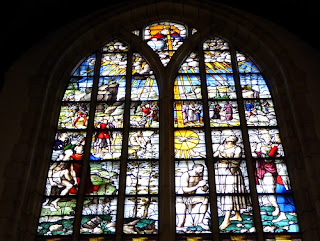 St John's Church (St Janskerk), Gouda is the only ecclesiastical building in the Netherlands to have truly weathered the onslaught of the Reformation - and, indeed, to have continued to build on the extant symphony in glass after the church was assigned to the Protestants in 1573. It's also one of the few churches of cathedral-like proportions in the country (the longest at 123 metres) to present so harmonious a whole; consecrated in 1510 after the destruction of its predecessor by fire in 1438, it had to be rebuilt again following another fire in 1552, preserving its structure but giving a finer spatial effect with the removal of every second pillar. 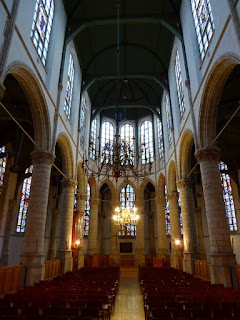 Some 57 windows, many of vast size, make up the drama, with an additional seven Passion windows placed in the Van der Vorm chapel coming from the Monastery of the Regulars in Gouda. These are the most rewarding to see at close quarters; I'll hold off from overburdening this entry with them since they'll come in useful around Easter time. Let me just slip in a taster of one of the four faithful dogs accompanying the donors in the lower portions of these windows. 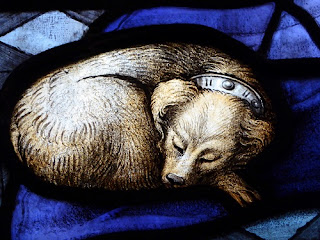 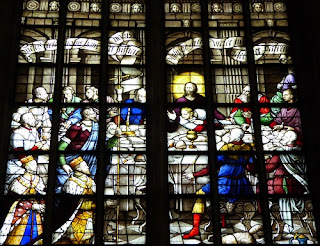 This, like many of the finest scenes, is painted by the supreme master Dirck Crabeth (c.1505-1574). His work essentially began with the central east window of the church's Saint baptizing Christ (pictured up top; more of the windows around the choir to come). 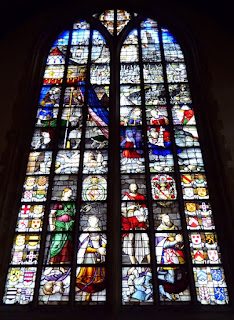 Perhaps his most obviously impressive work is the saga of Judith and her beheading of Holofernes, made in 1571 after his own design; the window was donated by Jean de Ligne, Count of Aremberg, and his wife Margaretha van der Marck.. 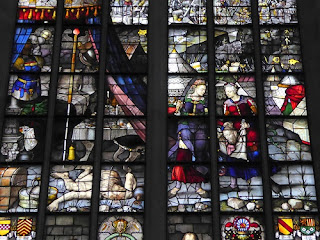 Dirck's younger brother Wouter 'illustrated' the Queen of Sheba's visit to Solomon a decade earlier, in 1561. 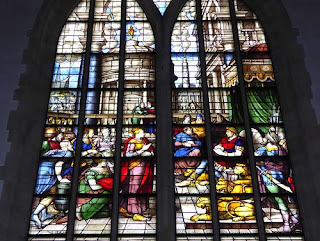 So to the series of eleven scenes from the life of John the Baptist interwoven with the birth and growing-up of Jesus. They mark the progress of the ambulatory from north-east to south-east, with Christ as Redeemer and figures of the Apostles in the upper lights made by Crabeth's studio. 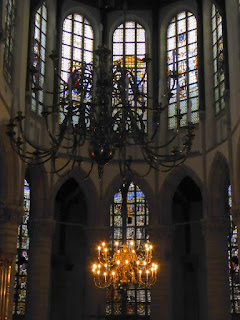 Odd one out, style-wise, of the lower glories is this Annunciation, a late (1656) replacement for the original of 1559 which was blown out. Instead of the usual donors in the bottom third are the arms of Holland and Gouda. Got to love the clouds, though. 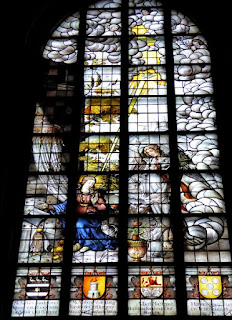 Wouter Crabbeth's work on the Adoration of the Shepherds has some nice touches, like Joseph in red holding a coal-pan. 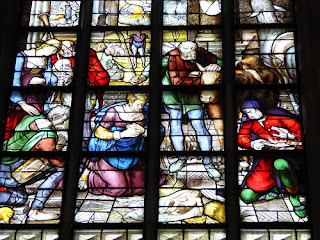 and in the second plane (difficult to see at this size) women tend to the child near a fire. 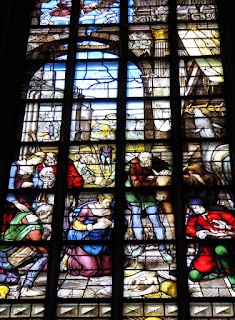 Here's 12-year-old Jesus in the temple by Digman Meynaert and Hans Scrivers, Antwerp glaziers. In the lower part, donor Abbot Petrus van Suyren kneels before the Madonna and Child. 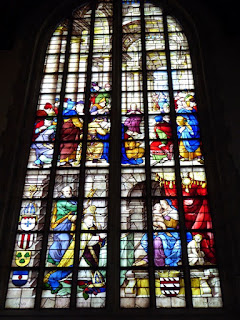 For some reason I don't seem to have caught the windows flanking the central glory which make up the great triptych, other than the splendid representation, below 'John the Baptists Preaching', of donor Robert van Bergen, with St Benedict behind him, kneeling before Christ in glory surrounded by symbols of the Evangelists. 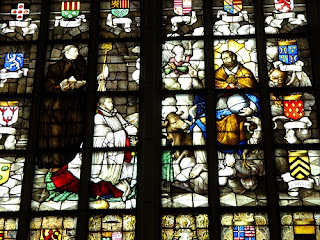 But here at least is the full baptism scene with Georg van Egmond, its donor, kneeling below 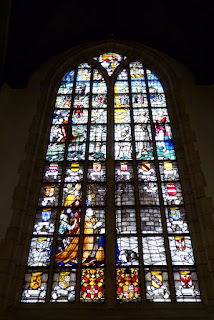 and a detail of Christ in the river Jordan with John the Baptist's outstretched right hand above him and the dove from the light-ray above that. 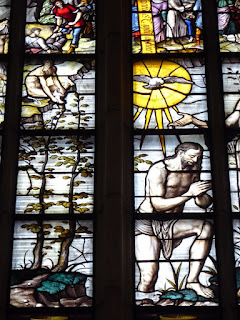 Next window along going south-east, also by Dirck Crabeth, is 'Jesus's First Preaching', with the donor Cornelis van Mierop and his patron saint St Vincent complete with millstone, shards and fire. 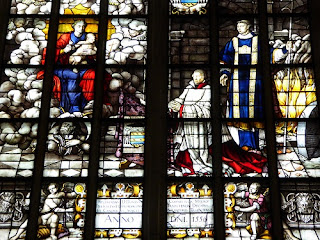 'John the Baptist reproves Herod' is by an unknown Antwerp master, dating from 1556, the same year as the Dirck Crabeth triptych, 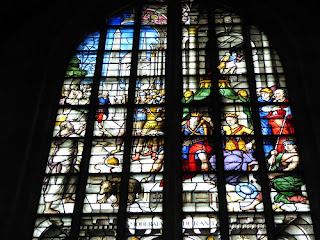 with equally piquant details like the bear on a chain beneath Herod's right foot. 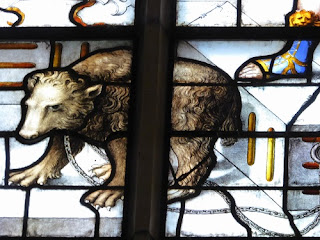 Many of the later, post-Reformation, windows tend to be secular in theme, starting with the Capture of Damietta presented by the city of Haarlem, whose soldiery are supposed to have distinguished themselves in this Crusade campaign. 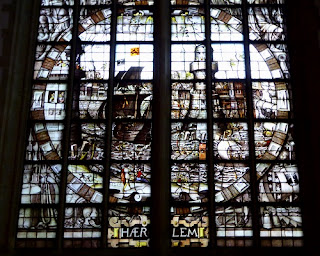 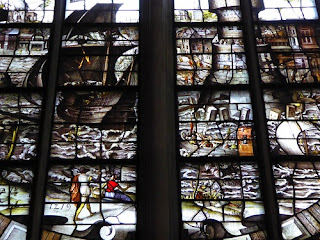 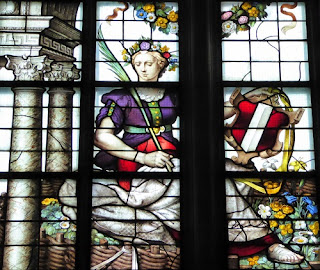 while I rather like the angels holding up the cartouche 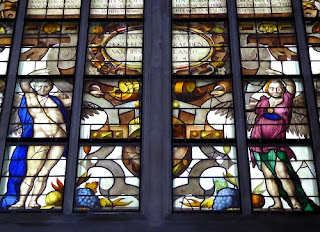 and, closing in further still, the bunches of grapes and other fruits at the bottom. 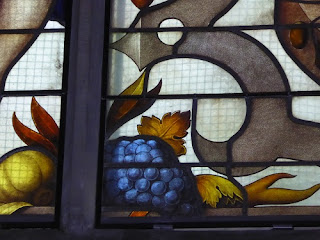 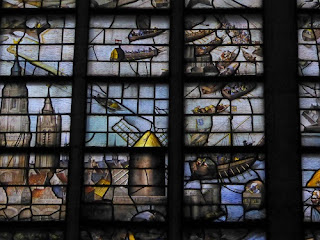 The glass does rather divert one from the other glories of St Janskirk - not least (though you take it in from various angles) the avowedly very fine 1736 organ by Jacob Francois Moreau. 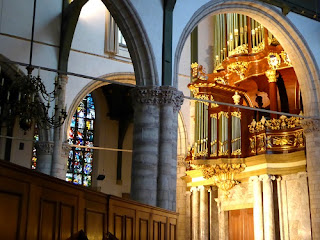 We didn't really leave ourselves enough time for full exploration of modest Gouda, but at least we sampled the delights of the Cafe Central, which stretched back much further than its modest facade suggests and had a wooden Virgin on the bar to hold still in the midst of all the bustle, 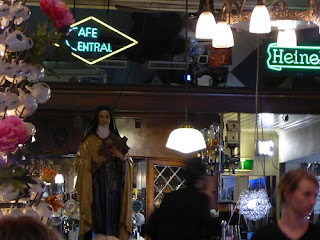 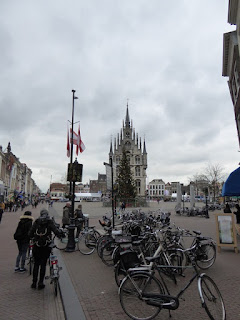 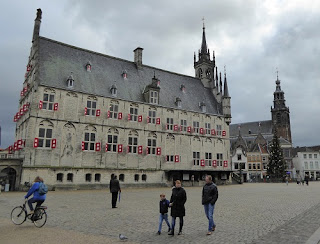 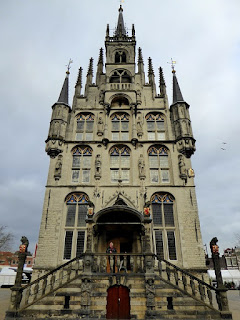 and observed the relief of cheese-weighing on the 17th century Goudse Waag from the other side of the skating rink. 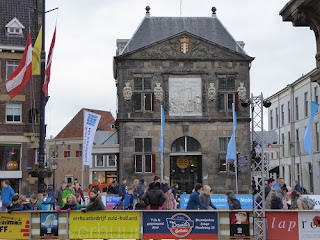 Then it was briskly to the station to take a train to sophisticated Utrecht, where we were to meet up with J's godson Frankie and a friend of his. More on that in another chronicle.
Posted by David at 14:31

My favorite of the stained glass might have to be the last, with the many Dutch touches. Over dinner tonight, a friend was talking about visiting the Netherlands soon. She plans on Amsterdam and Delft, yet Gouda, too, which I wouldn't have thought about, seems to have much to commend it.

So do Den Bosch, Haarlem and Utrecht, all within easy train distance of Amsterdam. But it would depend how long she's intending to stay. Amsterdam itself deserves at least five days.

The easiest way of seeing so much of the Netherlands is to hire a car. It is a small country. I had a splendid time in the 1990s when I had a house in Amsterdam

I disagree, except for those out of the way places like Buren, which I wrote about and which can't be reached by the otherwise thorough and regular train services.

Interesting about rental car v. public transportation. Most often, when we've traveled abroad (what is for us abroad, anyway!), we have stay 1/2 time in a city, 1/2 time in the countryside and rent a car for the latter so we can tour around at will. For Sicily, however, we opted not to rent a car. It did limit what we could see outside our two "base camps," but we really enjoyed taking the bus, rather than driving, across Sicily from Palermo to Siracusa, as we could just sit back and enjoy the views. We decided to try and do that (bus or train, that is) more often as a result.

We did very well the first time we stayed at Via Butera 28 - got the train along the coast to Cefalu, where we should have stayed, and then a bus not much later up into the Madonie mountains; our agriturismo was half an hour's walk from Castelbuono where the bus stopped. Walked back but on the way it rained torrentially and the padrone came to pick us up. Then we walked locally for the next two days. Perfect!

I quite like long road journeys (like the ones we did around Kakadu, from Brisbane to Sydney and around New Zealand's North Island), but the roads have to be mostly clear. Italian driving would terrify the hell out of me.