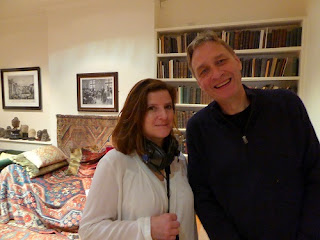 Coming up on New Year's Day at 18.45, Breaking Free: Freud versus Music, Stephen Johnson's examination of the great man's singular relationship to music. The programme is available here, I assume for more than the usual 28 days as that proviso isn't given. Delightful producer Elizabeth Arno, pictured with Stephen above by me in the famous Maresfield Gardens study (yes, in case you didn't know, that's yer actual couch behind - Berggasse 19 has a copy), asked the folk at the Freud Museum who might represent their side of the argument, and Ivan Ward, who arrived as part of the new batch of 'Museum Educators' towards the end of my group's stint, recommended me.

It was a trip down memory lane in more ways than one. I first met Stephen, now my best pal in the music fraternity, during my year at the Freud, which means both the work and the friendship date back 30 years (ouch). Though the blurb says it was my first job, that's not right; I'd spent a year as Assistant Editor on the beleaguered, shoestring-run Music and Musicians and had just gone freelance, with a book on Richard Strauss to finish. The three days a week at the Freud, sponsored by the Manpower Services Commission - I found the job at Golders Green Job Centre - was just right (pictured below: bin in Maresfield Gardens covered with Freud Anniversary stickers). 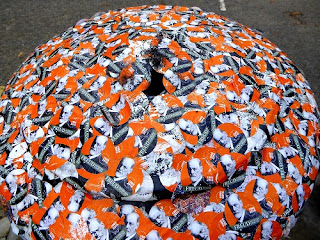 Not only that, but it will always be my most meaningful time in some kind of 'office'.I even got to put on a concert of Freud-related works, a sandwich of analogous works - Mahler's Lieder eines Fahrenden Gesellen in the Schoenberg arrangement, with J as soloist, and Schoenberg's First Chamber Symphony - flanked by the only music Freud seemed to care for, Mozart's Le nozze di Figaro and Don Giovanni, in excerpts arranged for wind. My friend Andrew Constantine brought his Bardi Ensemble from Leicester and I reckon it was a pretty good concert in Belsize Park Town Hall.

I'd completely forgotten that I'd even given a talk on Freud and Music in the museum, and only when Ivan printed out select quotations was my memory jogged this time to realise that Freud actually references Walter's Morgentraumdeutungweise via Sachs.  Now that there's a catalogue of the 3000 plus books in the library we were also able to find two short psychoanalytic studies of Wagner operas, both of them gifts so hard to tell if Freud read them or not. 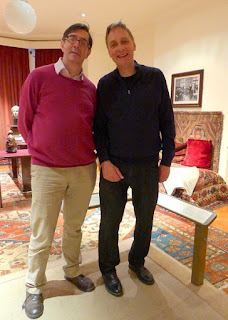 More of the issues you can hear in the complete programme, where I'm proud to stand alongside some fine figures in the psychoanalytic world as the more gossipy lifestyle commenter. We'll see what's there, but the main point is that we spent a very jolly couple of hours in the Museum and as always I sensed that extraordinary centredness and serenity that comes from standing in the downstairs rooms, left as they were at Freud's death by keeper of the flame his daughter Anna. 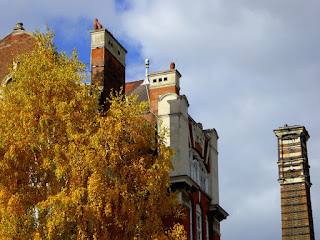 Stephen and Elizabeth needed to get down to editing business afterwards, so I took myself to Louis up in Hampstead, the Austro-Hungarian cafe, which never changes, for a coffee and cake and then wandered down ever-idyllic Flask Walk in peak Autumntime (as pictured above, looking up towards the local school) to Burgh House for a bowl of appropriately autumnal pumpkin soup 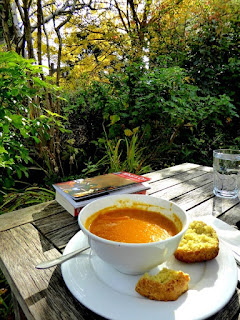 via an affectionate cat, appropriate since Stephen and his wife Kate were recently bereaved of the most characterful feline in the world, Agatha (I always called her A-GAA-the a la Freischütz) and we'd been talking about their new pair. Freud's favourite animals were chows, and he recalled that while stroking one of them, Jo-Fi, he found himself humming, 'unmusical as I am,' 'Dalla sua pace' from Don Giovanni - 'on her peace of mind mine also depends'. The words of the melody unconsciously summoned, he would argue in The Psychopathology of Everyday Life, usually had a significance. 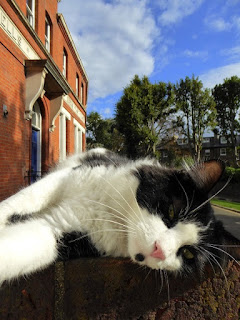 Anyway, it's nice, after a rather thin year for me on Radio 3, to be featured in something on New Year's Day. May 2017 be a good one for all, as 2016 has been for me on the personal and work levels albeit a horror on the world front - Brexit, Trump and Aleppo offset in tiny ways by victories for Sadiq Khan as London Mayor and LibDem Sarah Olney overturning the wretched Zac Goldsmith's 23,000 majority in Richmond Park. The fight against Fascism is going to be a hard one, but we've got to get tougher.
Posted by David at 12:17

It is not fascism we have to fear, but popularism. Once everyone has a say, as Clement Attlee pointed out, we are at the mercy of dictators and demagogues ( Farage, Trump). But it is difficult in the present climate to argue that. The most foolish sign of this dangerous development was when a BBC commentator, reporting the election of the new UN Secretary General by the 5 Permanent Members of the Security Council, said that the election was not democratic because ordinary people were not involved. Well, ordinary people got Brexit and Trump.

Popularism in the form of pandering to nationalism got Germany Hitler, as it now keeps Putin in his place in Russia thanks to the stranglehold of a misleading state media and manipulation of the internet, and has bequeathed America Trump. Pandering to the lowest kind of fantasy nationalism, fear and greed. And Putin is behind so much, I'm afraid. So popularism leads to the present kind of Fascism.

I was happy to hear your voice in the broadcast. It brought back a flood of memories from 1954 onwards. My husband was completing the translation of Karl Abraham's Clinical Essays for Hogarth Press(Freud's publishers) and I began to meet the numerous psychoanalysts in London at that time. Donald and I joined Anna Freud to become a trio of godparents to two girls adopted by psychoanalyst Hedy Schwarz. One of the analysts was Rosehill Theatre's Nicholas Sekers' sister-in-law. When we next meet I can tell you more.

That was a BIG treat - fascinating programme!

Must listen again, and then probably again.

I'd had the same thought about F's liking for Carmen echoing Nietzsche.

But must track down the Max Graf references ... do you know if the Wagner Problem paper is available in English?

Delighted to hear from you both and to learn of your interests/experience in the Freud world. I'll try and find out about the Max Graf paper - but first I need to listen to the programme; there hasn't been a spare hour here among friends in Amsterdam, though I suppose I could have opted out of the communal watching of the latest Sherlock - both weak and overwrought, I thought - to turn to 'the wireless'. Time enough when I get back. Happy New Year to you and others.

Your Freud interview was indeed brilliant, and I speak as someone who distrusts the Central European intellect. [Liam drew my attention to the programme]

But I did too, Sir D, at least a day before (see above). I'm glad you liked it and when we get back after all this Dutch swanning about, I'll try and listen myself.

Can there be any such thing as a 'Central European intellect'? Thinkers as different as Erasmus and Luther, for a start, if by Central European you allow a shift westwards from Austria and Czechia etc? There are a hundred thousand strands of thinking, surely?

Erasmus was an exception and note how he was in a way marginalised. Taking more modern times, I distrust the intellectuals in Central Europe ( broadly defined) and I agree that that is a rather narrower point than to say the Central European intellect. I see them as overly intellectual, overly instinctive ( that is not a contradiction), often neurotically so,bursting with enthusiasm for ideas, and so on. As result they are dangerous politically and I prefer austere detachment, calm reflection. This is however in the context of political aims, the government of countries etc. I may well be open to the criticism that in matters of personal life I am being life denying. I must add that as a result of your talk I have had to qualify my view of Freud

Am mostly offline while in Sicily, but came by to sneak a peek and send a belated Happy New Year to you and yours. Very much look forward to listening to the program when we are back stateside. I loved learning this bit of backstory about your work life as well! We are having a marvelous time, now in Siracusa for a few days. Chilly, though, and so windy today we had to forego our intended trip the the archeological park until tomorrow We could use that brilliant bonfire you show in another post!

Yes - I saw from your J's blog and a few random Sicily photos gleaned peeking at my J's Facebook that it snowed in Sicily, which might be another 'as rare as...' for Rachmaninov to add to his comment on true bases ('as rare as asparagus in winter'). Glad you've got to Siracusa, happy memories of interrailing there in 1985. The 'parco arcaeologico' was one of my first intimations that things are on a more forbidding scale in Sicily ('Dionysus's ear' is unforgettable), so I hope you get there. It was still freezing at 2am on Scheveningen beach, even with some warmth coming from the still-distant bonfire. Am enjoying seeing the familiar - the hands of Antonello's virgin - and the less so - the puppet museum - on Josie's blog. Hope there will be more soon.