Swanning round the Scandies 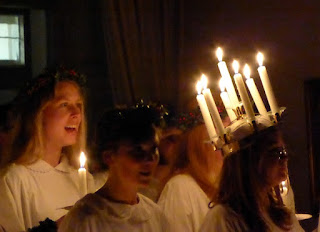 Some would argue that Finland isn't strictly part of Scandinavia, but as it seems to be possible to include it, I can add it to a week of visiting embassies or ambassadors also representing Denmark, Norway and Sweden, courtesy of J. I'm not much of a one for too much 'canapes and mingling', a profession for some folk, but the Nordic countries do know how to celebrate Christmas in music as much as food and convivial atmosphere.

I'm not rating them from 1 to 10 as each had something different to offer. Strictly speaking, the event at the Danish Ambassador's residence - I call him Mick because he could have become a rock star and knew Jagger well, his wife Ingrid because she looks like La Bergman - was to augur well for Aarhus as European Capital of Culture next year (I actually missed the proper Christmas bash the following week because of a long and complicated eye test#). The Norwegians boasted a grand Christmas tree - they'd come hotfoot from lighting up the big one in Trafalgar Square - 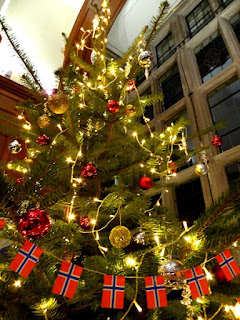 and tables of sweet delights 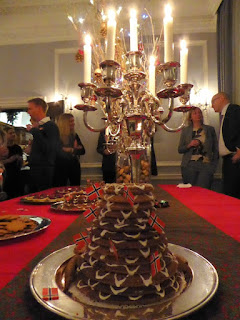 as well as the chance to see the pretty lights within from the garden. 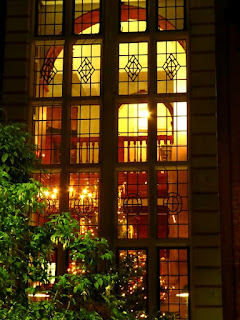 Perhaps more important, I met three people for the first time whom I liked a lot. 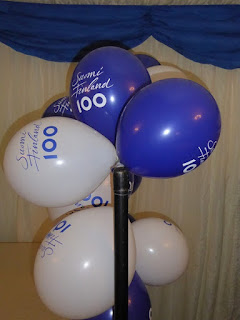 Ditto at the Finns', where the fish was heavenly.

Inevitably the Swedes has a trump card: the annual Santa Lucia ritual, lovely Swedish carols sung by excellent choristers in candlelight. I experienced it for the first time in Örebro a year ago and wrote a bit about the (rather recent) tradition in the blog entry on that visit. 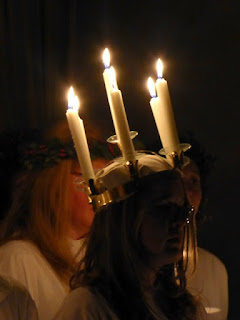 Eventually I succumbed to joining the many pointing their cameras and smartphones at the ensemble and filmed the choir singing "Jul, jul, strålande jul", composed by Edvard Evers in 1921. Unfortunately it's too big a file to be uploaded here. So we'll make do with the pretty visuals. 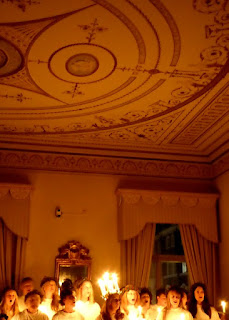 The Swedish Ambassador's Residence at 21 Portland Place is one of the gems of the Adam brothers' original Georgian designs, with stunning decorative work both on the staircase 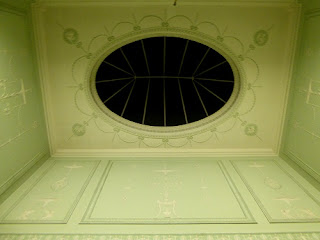 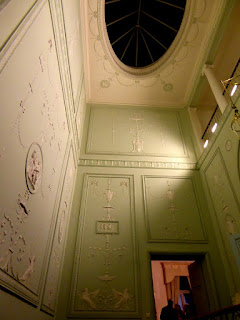 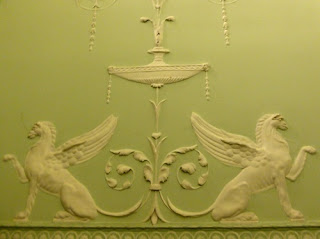 and on the ceilings of the main rooms. 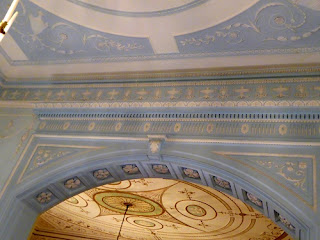 Gustavus III , the same assassinated by Anckarstroem in Un ballo in maschera, got the seasonal Swedish getup 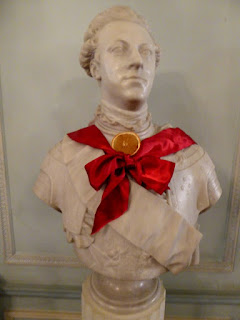 and the Christmas tree looks especially handsome below the grand staircase. 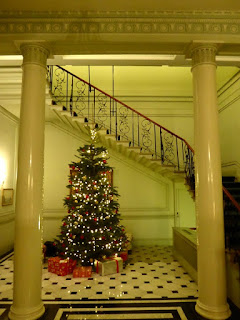 One more, this time outside the Richard Rogers restaurant and offices which are my entry-point on my bike to the Thames. 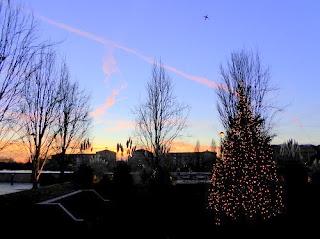 An advantage of neglecting to get out in these short days before the light has begun to fade is catching some spectacular winter sunsets. This one was already well underway when I reached the river 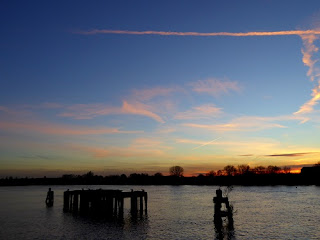 and the bend at Hammersmith revealed an especially fine pink beyond. 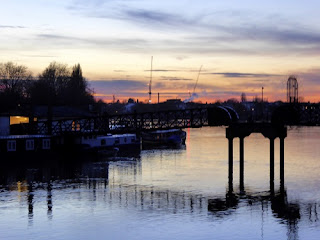 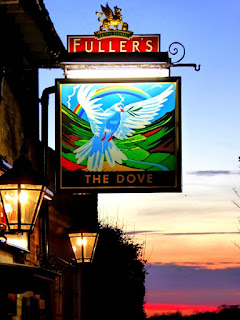 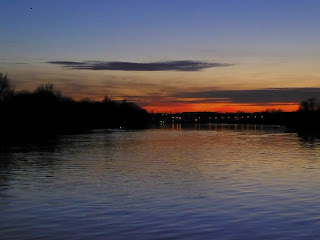 Here's a constant wonder of the route, Hammersmith Bridge (by Joseph Bazalgette, an 1887 replacement for the original by Tierney Clark, the same man who designed the Chain Bridge in Budapest) 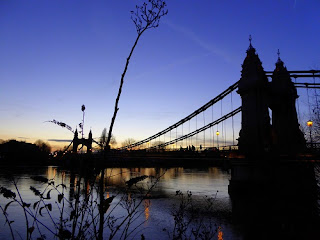 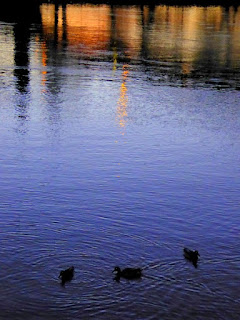 also caught looking back from the bridge to the Harrods Furniture Depository, saved by redevelopment as flats. 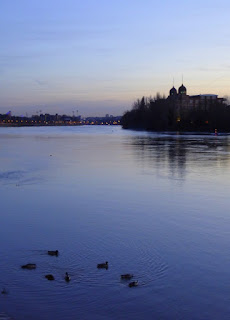 Which permits another riverside/sunset diversion, taken the previous Sunday after a very lively gathering at the Hermitage Basin home of the delightful Claudia and Stephen Pritchard. This is their outlook 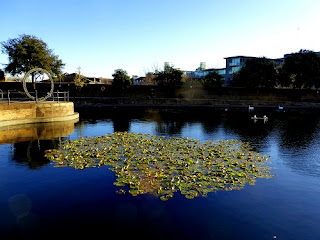 and just beyond is London Bridge. 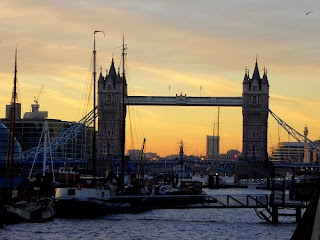 Heading east, I retraced steps taken on a Wapping walk with City of London Guide and erstwhile student Julia Kuznecow. 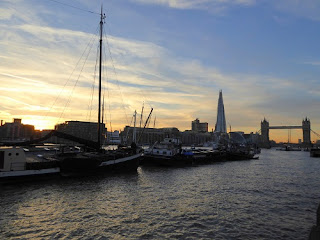 The centrepiece of the Wapping trail is undoubtedly the symmetrical terraces and garden of Pier Head,  once the main maritime entrance of the London Docks (built in 1805). 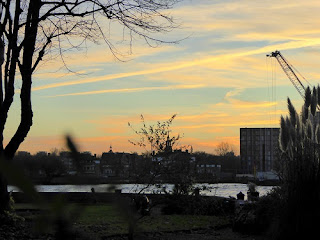 These were the homes of Dock Company officials, customs officers and merchants; now quite a few celebs live there (someone told me whom last week, and I've immediately forgotten). 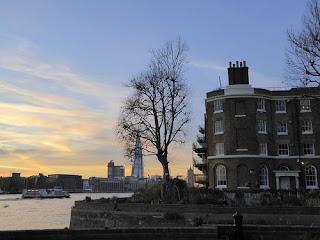 Reverting to the day of the big Hammersmith sunset, as I cycled home I suddenly saw the last full moon of the year - still a supermoon - through the trees of Queen's Club Gardens 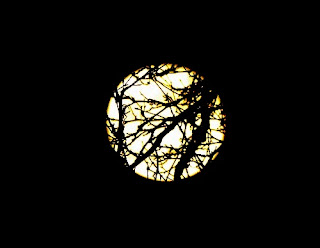 and in its full glory. 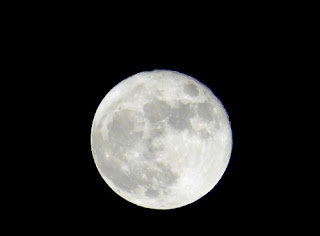 The next night I went out to see it again, and orange was the colour. 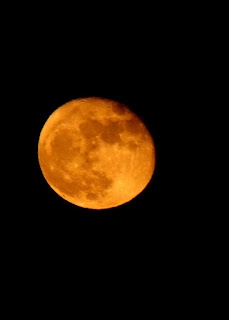 As I snapped away, an odd man who thought I was photographing him and stopped to chat told me his theories of how the moon was an illusion, a NASA-dominated conspiracy theory, and how he'd been reading on the internet that the earth was flat. Very Zeitgeisty, and of course the fight back against post-truth online is already under way.
Posted by David at 12:05

Your supermoon, in particular, is grand, and I loved your tour of Scandinavia and Finland. Re Hammersmith, envy you your walk! We went out yesterday for a walk on the Rail Trail, only to discover it was covered in ice. We'd forgotten it isn't cleared wintertimes, so if snows, melts a bit, and stays below freezing, it's impassable. Alas.

So far it's not even remotely cold here, and wasn't even on the clear days recently. I think we escape the super storm (one of those named ones) which is about to hit the North West. Snow would be fun, but ice not - and that would keep my old mum indoors, so I hope we don't get it soon for her sake.

Bazalgette was extremely good at sewers......London is grateful to him

How splendidly tangential. Indeed. Not sure we should be quite so grateful to descendent Peter for giving us Big Brother and deserting the ENO in its hour of need...

May I take this opportunity to wish you all seasonal best and to say that the Garrick honey, which I've just tasted, goes straight into my list of the top five to date.

From the Asco Valley in Corsica, the Chelsea Physic Garden, a private manufacturer in Ealing (with a tube map as his label) and thyme honey from Naxos (bought there, for distribution only within the island).