Spetses: the pine-clad one 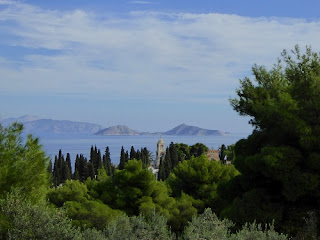 Or Pitouissa, as the ancients called it, and I imagine the gentle, salutary charms of Spetses, the smell of the pines, the low hills and the welcoming bays, are much as they were then.  'Some find it appealing and some appalling,' Lawrence Durrell writes in his flavoursome, anecdote-rich The Greek Islands, a good book to dip into during a lazy holiday during which others remained unread, adding that 'the truth, of course, is not extreme'. Nor is the island, in marked contrast to louring, bald Idhra, which one has the benefit of surveying from the town and above it, a touch of more savage nature in contrast to the mild surroundings.

In our short November stay here I found none of the slightly forbidding mysteries of the only other Greek islands I know - Naxos, Samos, Kythera (about which Durrell is dismissive, presumably because he only had one negative wartime experience of it and didn't explore; it has huge variety around the south end). We stayed in perfect peace and harmony, and slept soundly, at the villa of Nikos and Lise; more assiduous, relaxed hosts it would be impossible to find. Continuing the mainland route from the end of the second Nafplio entry, our tortoise inspection made us late for the afternoon ferry over from near Porto Heli; we saw it just heading out as Nikos parked the car. The distance, however, is very small, and water taxis plentiful, so no problem. 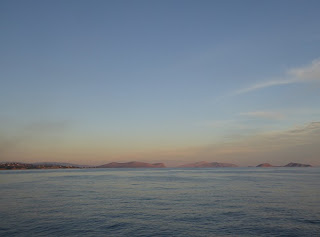 And the sun was just setting, lighting up Idhra and its neighbours, Dokos and Trikeri, which because of its closeness seems disproportionately large. 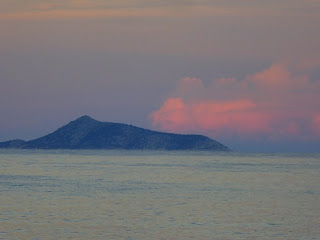 At the harbour, Nikos hopped on his scooter to hunter-gather - there may be no cars, but these machines aren't a lot better, it has to be said - while we took a long route home via the big villas 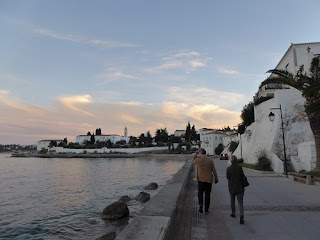 and the old harbour 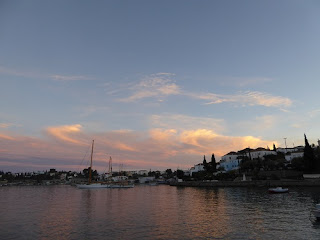 catching a heron on a yacht mast 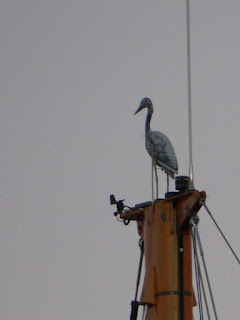 and going inside one of the oh-so-many churches on the island. 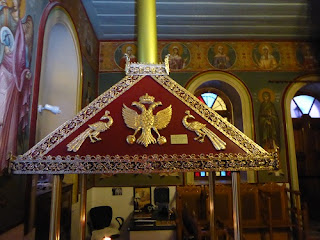 This one's priest, a very kindly-looking and humorous gentleman, used to teach at the big Anaryiros Koryalenos College along with John Fowles, whom he knew. It's a long time since I read The Magus and I can't really imagine wanting to revisit it,  but it would certainly be illumined now by locations with which we're now familiar.

That evening we went out for an excellent meal in a local restaurant run by an entertaining but angry man who hated his mother for (as he saw it) forcing him to return to the island, take over the business and still have to wait for his share of the property. The following night we ate, in still-balmy weather, on Nikos and Lise's roof terrace. Fabulous views from here of Idhra and co across the rooftops. Even the concrete invaders among the houses now have to be roofed with traditional Byzantine canal-tiles. Workmen were doing just that as we looked down on the first morning. 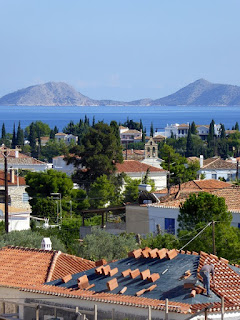 Our choice on our only first full day was to take a leisurely walk by the coast and a proper swim, or do more vigorous exploring of the island, And the earlier bliss of our Nafplio beach experiences inclined us to the former.  Domestic animals on route had the perhaps wiser idea just to nap in the shade 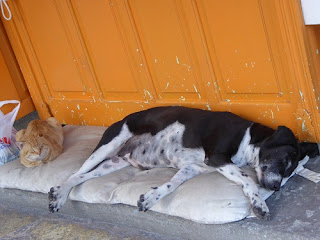 or crouch and stare. 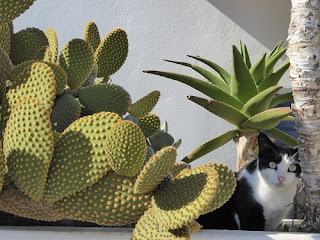 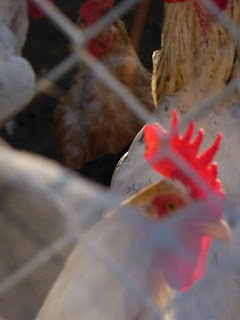 and through a pinewood strewn with cyclamen and these very artistic-looking leaves (name of the plant, anyone? UPDATE: Louise, below, tells me they're cyclamen leaves, no flowers in this case. I should have realised) 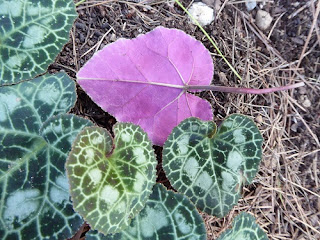 led us to a perfect and empty beach (only a couple of girls appeared later to fish from the rocks). 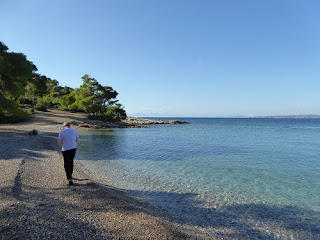 I swear we were bobbing around in the water for at least an hour. And then we pottered around the rock pools for another hour, maybe, feeding the fish. 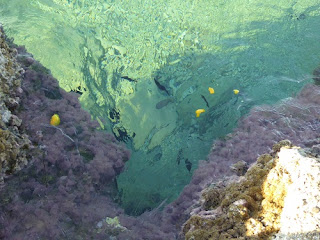 The plan had been to carry on, up and across, but with no provisions, and hunger/thirst gnawing, with little likelihood of seasonal tavernas still being open, we thought it best to head back into town, past a white horse in an olive grove 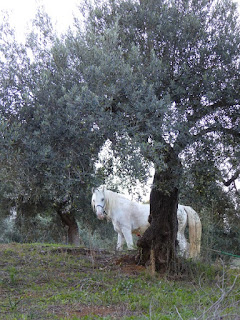 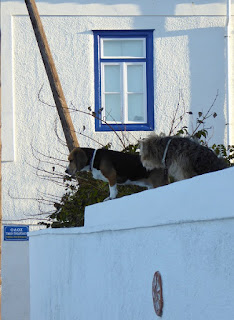 before stopping, famished, for some delicious pre-proper-supper seafood at a restaurant with tables on a beach run by the Ukrainian wife (from Donetsk - what an escape) of a local and her absolutely delightful, Natasha/Tatyana like daughter who was so keen to practise her English.  Then on past the grand hotel and the statue of the redoubtable admiral-heroine Bouboulina, emblem of the Greek Revolution. 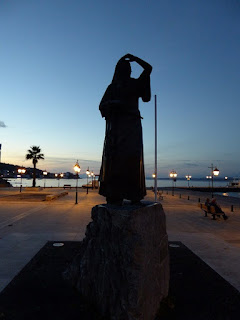 Church bells woke me at sunrise on Sunday, so the view from the terrace had to be seen. I'm glad I rose. 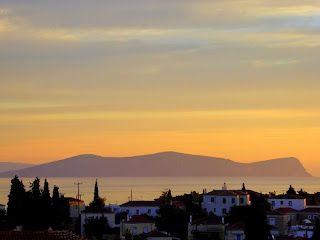 Nikos and Lise had gone off even earlier to Idhra to look at a house. Duty should have sent us to the local museum. But J just wanted to chill and I intended to walk up to the higher spots of the island. I got, at least, as far as the Monastery of Panagias Gorgoepikoou. 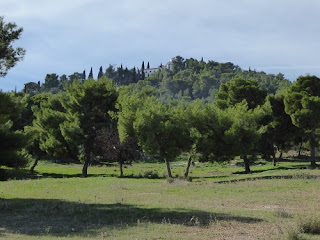 Be damned if I had no idea it was built as recently as 1984 (quite a bit of websearching involved to track that down; I guess that's why it's not even on the map I had of Spetses). No matter; it's set in the kind of position all good monasteries should have. 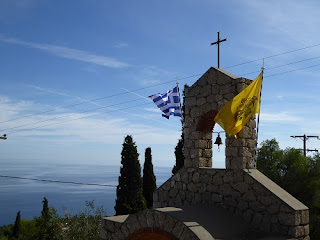 Frustrating, though, that no paths could be accessed to lead up and over. Nothing more to do but admire the views south-westwards to Spetsopoulo 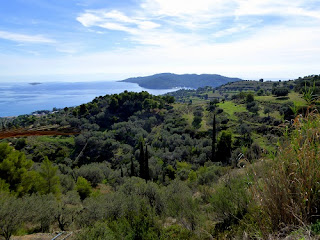 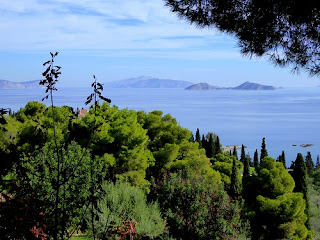 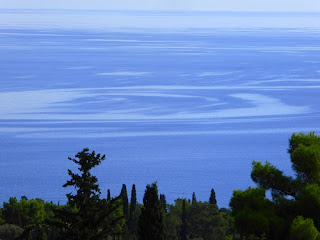 as well as down to the town, harbour and mainland on the way back. 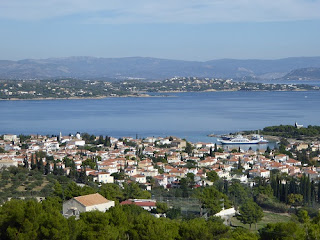 So I ended up retracing my steps, and an hour later we were down by the harbour waiting for our boat back to Piraeus, which gave us a fleeting chance to see Idhra, Leonard Cohen island (annoyingly you can't go out on deck while the vessel is speeding along, hence this view through a window), 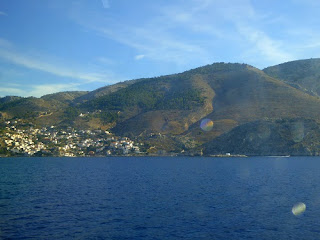 and our friends waving from the jetty 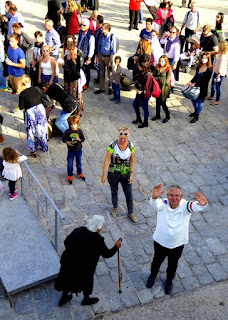 as priests, families and holidaymakers climbed on to the previously near-deserted boat 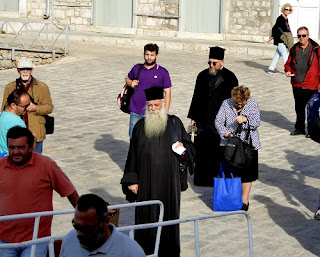 and then there was a final stop at Poros 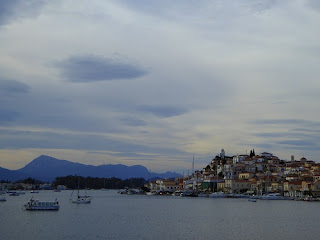 before sunset, Athens and the flight home.
Posted by David at 10:59

Lovely photos once again, David. The plant is a cyclamen, obviously no flowers or you would have known, however have not seen with such colourful leaves!

What are you complaining about, when you live on your own 'special island'? Admittedly it may have been a bit stormy and snowy recently, but some of us like a bit of that too... Anyway, with my other best blog mate Sue and her partner off to Palermo and nearby bits of Sicily with strong recommendations from here, I feel you and Laurent could take off *now* too...