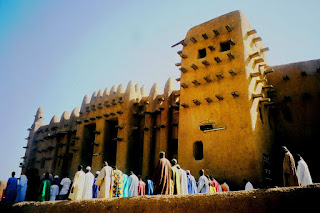 Much has been made of the coincidence of the Christian and Jewish holidays today. In the name of interfaith peace and goodwill, I also wanted to go back to 25 December 2007, when we happened to be staying with our enterprising friend Sophie in her (then) new mud hotel in Djenné, Mali, and Tabaski, African Muslims' version of Eid al-Adha, shared the same day as our Christmas. Thus the photo of Djenné's men in their finest boubous praying outside the adobe wonder of the Great Mosque, which I take the liberty of repeating from one of my earliest blog entries back in January 2008.

It's a reminder, too, to get on with my reading of the Quran, which so far - two-thirds of the way through Book One - has revealed nothing but tolerance and welcoming of other religions on the grounds that we all share the same God. Plus some liberal ideas on divorce.

Owing to a postponed operation - one of the many in the current NHS crisis - Sophie is still with us in London, and later we'll be heading over the parks via other chums in Bayswater to share the big lunch with her and former attendees of her Tuesday soirées at another mutual friend's.

Salaam, and here's a medieval Virgin and Child from the east window of Merton College Chapel, taken after an Oxford Lieder Festival concert which we attended with Sophie's godmother Juliette (she's actually younger, a bit), her partner Rory and her mother. 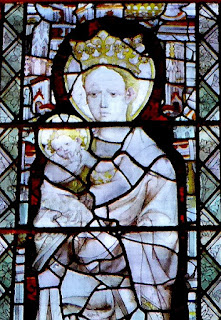 Salaam, David! And in appreciation of your recent post, listening to The Dunedin Consort, on what a musician friend calls "a morning when only Bach will do!" A peaceful new year for you and yours, and for us all - what a wonderful thing! -- Elizabeth

Christmas Greetings sent with our sincere wishes that an oasis of peace surrounds yourselves in this world chaos. (As you've been saying for yonks, Putin is playing a long and nasty game.) While our paths didn't cross in the year receding, maybe the coming one will be more accomodating.


Many Muslims actually celebrate Christmas. Apparently the Quran mentions Jesus more than two dozen times as a righteous prophet like Moses and Abraham. They don’t think of him as a god but rather as a great teacher and spiritual leader. Hope you’ll keep us posted on your Quaran progress.

Such welcome messages, all. Elizabeth - I looked over your way to see any more signs of newleaf life, and was going to leave a message anyway. So pleased to hear from you - and I really do think the Dunedin's Magnificat disc is absolutely the best I know for Xmas morning. Played it again today, with smatterings of Brahms and Tchaikovsky.

Wanderer, we think of you and K and that adorable kelpie in your warmth and light (hoping you don't sizzle). You will approve of our dog exercising in Kensington Gardens this afternoon (Teddy, my latest love object - I want to take on a Budapest street poodle who looks very like him, but mansion block life wouldn't permit or be fair).

Josie, the Muslims seem to have adopted the sensible side of Jesus - the good man rather than the 'scoundrel' P Pullman denounces for cooking up the miracle aspect. I'd long intended to put up a post with the wisdom Karen Armstrong draws from the Quran, but wanted to read it for myself to see whether for everything with which I agreed there was a counterstatement. Haven't found one yet but had better plough on.

Peaceful hols to all. We're collapsed at home after a busy day socialising and a lot of walking (from West Ken to Westbourne Grove via Kensington Gardens and Paddington).

Again an interesting post always a pleasure to read your blog not to mention the photos.

And season's greetings to you and Will on your very own Odin's Island.