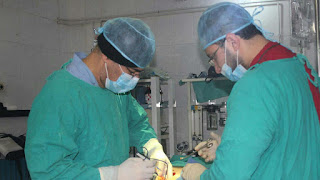 This article first appeared in September. I felt it was vital to put it up again in the thick of the hellish endgame with the so far encouraging news that Dr al Khatib is still alive and doing what he can, or was when he posted again on Change.org two days ago. And here's a link to The Huffington Post's helpful piece on how and where to give. For a shocking, nuanced report on the impossible dilemmas and compromises around the Aleppo nightmare, read Robert Fisk's article in The Independent online - just about the only thing I've read there recently to suggest that once fine broadsheet has anything left to offer.

It should come as no surprise that an American politician, albeit one even dumber if possible than Trump, should yesterday have asked 'what's Aleppo'? The answer is, perhaps the most pressing catastrophe of many facing us at the moment. Dr Hamza al Khatib (pictured below) started up a Change.Org petition several weeks ago with a simple message: 'I am one of the very last doctors serving the remaining 300,000 citizens of eastern Aleppo. Atrocities are being committed every day. The Syrian regime and Russian aircraft are systematically targeting civilians and hospitals across the city. In the last week, I have written to both President Obama and Chancellor Merkel calling for their help'. 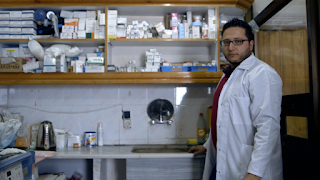 I circulated the petition; some of my acquaintances wrote back to say, what on earth do you think Obama and Merkel can do? Setting aside the complexities of the issue, it seems to me absolutely essential that I post Dr al Khatib's latest message. Nothing has made me feel more desperate about the untenable situation, or clarified it so ruthlessly. Chlorine attacks? Still? I mourn for this city, so racy and wild when we visited in the 1990s. Those souks and monuments, all destroyed; but now we have to save as many civilians as possible. Thus our noble doctor:

I have been overwhelmed by your outpouring of support. It is heartening to see that so many people across the world have joined my call, and the call of my fellow physicians, to Obama and Merkel to do more to ensure the people of Aleppo are no longer subject to vicious bombings and brutal sieges.

But it is with a heavy heart that I now write to you, as a Syrian Government offensive, supported by Russian airstrikes, has left eastern Aleppo re-encircled and cut off from desperately needed medical and humanitarian aid.

It is hard to describe the anxiety of impending starvation. The knowledge that each meal will be smaller than the last, that each patient will have less anaesthesia than the one before him or her. It is like carrying a weight that grows heavier by the day, dragging you towards the ground.

This is the reality for the 300,000 civilians trapped in Eastern Aleppo - my family, friends and patients who now all face an uncertain fate. As we face a debilitating siege, relentless bombardment and now chemical weapons, our suffering is as much psychological as it is physical. As deadly as these chemical attacks are, their real impact is making our homes feel unlivable, as though even the air we breathe can take our lives from us.

Just this week government planes dropped canisters filled with chlorine, sending dozens to our hospitals, gasping for air. This is another in a series of chemical attacks by the Syrian government, who have shown no regard for Obama's 'red line' on the use of these internationally banned weapons. President Obama, too, seems insufficiently concerned about these violations.

As I rushed to treat the victims of this attack I was shocked to see children as young as 5 and 6 knowing how to hold the oxygen masks to their faces without the help of doctors or parents. What does it say when these attacks have become so routine that even children have learned to treat themselves amidst the chaos? What does it say about what this war is doing to our children when holding a gas mask to their faces comes as easy as holding a coloured pencil to paper?

But I have made a pledge to remain by the people of this city and my commitment to that is unwavering, even in the face of relentless bombardment. Frustrated, angry and exhausted as I am, I have not lost hope. The heroic people of this city give me hope, as does the knowledge that across the world people like you are taking a stand for Aleppo. With your voice, you can assure that the people of this city do not suffer in silence. I'll be in touch with more updates from Aleppo as soon as I can, but in the meantime please share this campaign as widely as you can and help us let the world know what is happening to Aleppo.

Please sign the petition and tell everyone you know.

Update (23/9): after the targeted bombings of, inter alia, major aid convoys, Dr al Khatib has put up another post on change.org on the results of what Khofi Annan called 'new depths of depravity' from the Russians and the Syrian government.
Posted by David at 14:00

Signed and shared, as we 'friends of Mark' say, although he has incurred the wrath of the editor of Norwegian newspaper Aftenposten for removing the famous photo of Kim Phuc and others fleeing a napalm attack in Vietnam.

I'm not a 'friend of Mark' as, although I look at J's work account and snort at the amount of fatuous nonsense on there, I don't/won't 'do' Facebook myself. I must read the story - I didn't grasp what was going on from the headlines.

David: I would like to support this, though I can't find anything on the Obama administration response, which is characterized in the letter, and I'd like to confirm that as correct (if not, that dampens credibility of the petition, I think). I've tried to google, but can't find any trace of the response. There is something, though, that I've been wondering about that Dr. Ezz discusses in an NPR interview: "We have always been appealing to the United States and the powers in the world to put an end and to make a safe haven - a non-fly zone, for example - for these areas in order to protect the people, but nobody is listening." He should be aware that Clinton is listening. I do wish we could get the clowns out of the way in our own election to have a substantive discussion on this. Clinton favors a coalition no-fly zone, for which she has been attacked by other candidates (including Sanders)--and continues to be attacked, from both the right and the left. I tend to think her position is correct, and Dr. Ezz's comments seem to confirm this. What do you think?

Where is the interview with Dr Ezz to be found? Who is he and what is NPR? Of course HRC is right to want a no-fly zone - I thought that had already been established until Russia and Assad broke the deal. How was it allowed to break down and why the lacunae - these are things which we can't gauge when Aleppo keeps disappearing from the news for weeks on end. And it seems Clinton will be as hampered as Obama was by Congress and the House of Representatives.

In this case, I'm not sure the original demands of the petiton are necessarily the right ones, but the description of what's currently happening overrides all that in its vividness. Obama was weak to back down over the chemical weapons issue when it was obvious that Assad would break the conditions. But I don't see what else he could have done short of sending in troops at that point.

Hi, David: Here's the link to the NPR interview:http://www.npr.org/2016/08/13/489883534/aleppo-doctor. NPR is National Public Radio. On the no-fly zone, Obama is not in favor of it, so no, this is not established as a principle in the US. When it comes to foreign policy, when and whether Congress must weigh in to undertake a coalition-based no-fly zone is not clear. To the extent Congressional action is required, we are hoping the the outcome of our election will not only deliver a Clinton victory, but also will return a Democratic majority to the Senate, with an increased number of Democrats on the House side. Clinton is also working hard to foster relationships across the aisle to the extent that's possible. I don't know that Obama was so much weak on the chemical weapons issue, but rather that he tends toward an isolationist stance generally, and that may have been what was at play (I am not, though, meaning to say his choice was the right one). All that said, the horror of what's happening in Aleppo, and Syria as a whole, is undeniable, and you are right to point it out and to urge action.

From the beginning, the cries " Will no one come and help us?" were heart twisting. But there is nothing the West can do. Most of the many parties involved are committed to Power, or to their religion ( and Shia versus Sunni) to the exclusion of any humanity, and making talks an unrealistic aim, until the Russians arrived. And the West have learned their lesson against military intervention - whether in Afghanistan where we had to go in or Iraq where we should not have gone, we left only chaos ( plus we were even more vilified in the world for " killing Muslems ") The entry of Russia made military action even more impossible but it did raise the hope that Russian influence with Assad would enable the Russian/US talks to lead to a cease-fire, though as all parties do not want the other forces to be re-enforced during a cease-fire the current agreement may not last

Sue, it will all be too late by the time Hillary arrives in the White House. David, I fear you're right, but they have to go and talking. Eventually it will all come to an end, but how or when is anyone's guess. Even Assad and Putin will fall from power, but again, how long is that going to take? These are mass murderers responsible for deaths by the day.

You are of course right, David, that action is needed now. While David D's point about the West's "learning their lesson" and shying away from intervention is well-taken, I have to believe there are steps the West can take, and we must press to recover the political will to make that effort. The cease-fire, while not sufficient, is at least a step in the right direction.

On cue, a proposed peace deal forged between America and Russia popped up the day after I wrote this. I'm sceptical as before, but it does suggestest there's not 'nothing the West can do'. If only to put an end to the siege, it will have achieved something - though of course the targeting of civilians is mostly the Russians' doing.