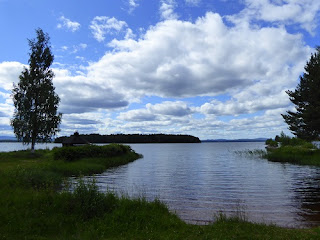 It has become a point of honour that I must immerse myself in sea or lake if either is available on a summer trip. Hardest was the North Sea off Crail, Fife, last year, in a haar that made the outside cold too. My pal Kari Dickson, who shared the dip and came out equally sharpish, claimed it was colder than the Firth of Forth on New Year's Day, so I do get a brownie point for that one. The five ventures this summer so far have been relatively simple, though I do bear battle scars from one. Despite that, it's rather boring how everyone now goes on about 'wild bathing', with encouragement from the media. There's nothing to it once you make up your mind. 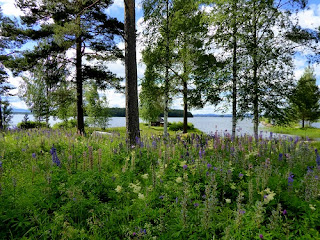 Norfolk (1) I've already covered in a post on a very full day. Most pleasant of all were the daily plunges very close to the idyllic wooden house I had to myself (and an unaffectionate cat called Sebbe) by the water at Vattnäs in Sweden's lake district of Dalarna (pictured up top with the sauna, which I didn't use).  Here's my wonderful host Gun-Britt by the shore, from the window. The lupins, by the way, are beauties, but the locals are in two minds about them - they're invasive, nothing can grow around them. But so long as they can be controlled, I'd be happy to have hosts of them around me. You just need to cut off the heads once the flowering is over to stop the seeds spreading. 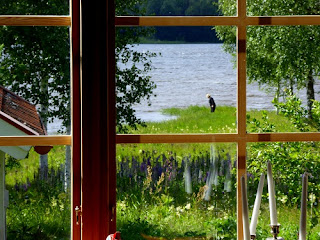 I felt immediately welcomed into the bosom of the Andersson family on the evening I arrived, when folk music was being played with a friend who knows all about these things, Lars Thalén, his wife Ingela on the zither, grandson Victor as second fiddle and Victor's girlfriend Anna on saxophone. 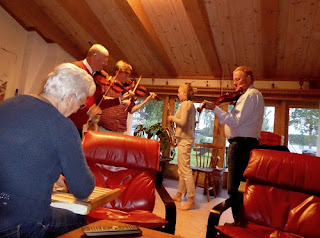 The young 'uns were involved in Anna Larsson and Göran Eliasson's latest project in the nearby barn-theatre, a uniformly well cast and superbly played Das Rheingold; for more on that, see the Arts Desk coverage. Weather was changeable, but that made for many magical lights on the lake - like this one, when I woke up at 5am and snapped before going back to sleep, 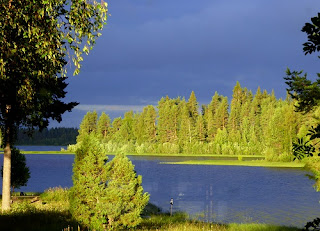 and this one after the rains. 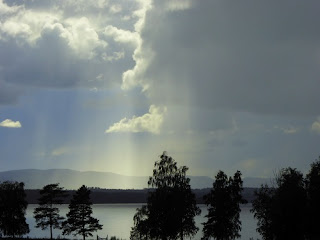 Two more, one from above when we went to pick up a fellow writer from his accommodation 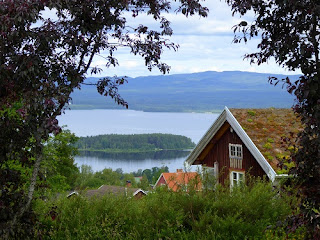 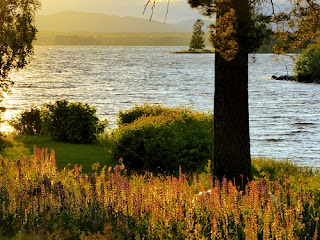 A blog entry on excursions to the wonderful Anders Zorn Gallery and House in Mora and the rift valley of Styggforsen will have to wait. A full report on my fifth Pärnu Music Festival is, on the other hand, imminent. 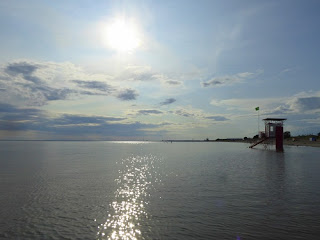 How I love Estonia's summer capital; even knowing that the permanent residents have a nasty habit of supporting the country's newly emergent far right, with its links to Marine Le Pen, I feel comfortable among the summer visitors who know how to have fun without the excesses of British holidaymakers. Bathing here requires a considerable wade out in the shallow waters of the eight-mile sandy bay, but it's worth it - especially at midnight, encouraged by doyenne Lucy and several other companions. The disco on the beach throbbed and twinkled boisterously, but there was also a blood-red moon rising. None of this documented, of course, but I have the usual beach pics, most dramatic on the day when I went for a knee-deep paddle and the third of the day's storms threatened beyond the dunes. 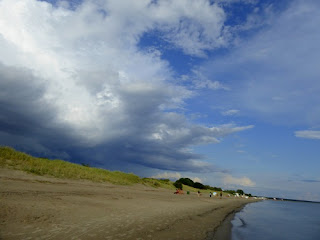 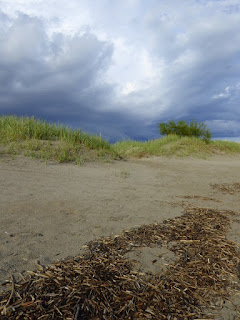 It looked so impossibly calm out at sea, despite the cumulo-nimbus forms on the horizon 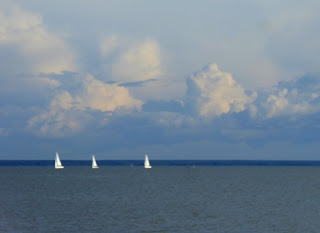 that I didn't make much haste heading back in the heat - until I saw a spectacular forked lightning display up the river. And the cloud formations over the wetlands looked almost cyclonic. 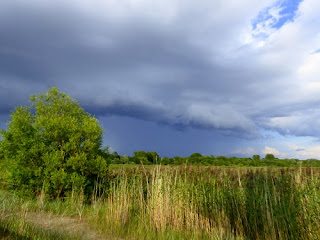 So I ran through the woodland and into the Villa Katariina where we'd stayed last year, for a drink and a snack, just as the heavens opened. It was over in 20 minutes, so I just had time to dash back to the hotel and on to the evening's concert. All was calmer by the time J arrived - four days of uninterrupted sunshine. I rely on him to offer proof that I did bathe, 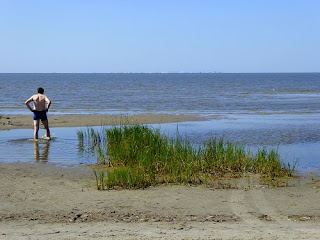 eventually swimming out towards the masts of the annual yacht race around the Estonian coast, and then we just water-waded along the coastline 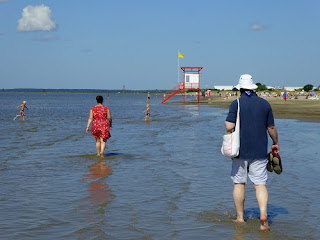 to a river mouth this time without a hint of threat, solitary tansy in the dunes a magnet for bees, 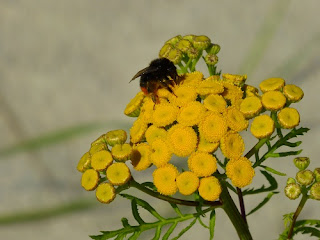 and the shoreline cattle doing their thing as luxury yachts incongruously sailed past them. 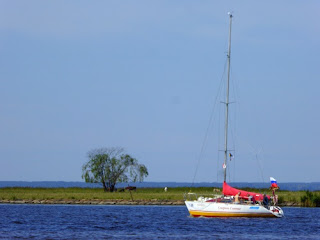 More of our bovine friends at the water's edge were to be seen by Lake Windermere nearly two weeks later. 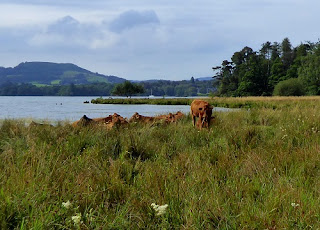 I had a totally wonderful time in Ambleside and Kendal, giving two talks on Shostakovich as part of Lake District Summer Music's day of events which I'll outline anon. I only had the morning of my departure free, and could have gone up to the fells, but wanted the swim so headed for the lake out of town. The National Trust is responsible for fair meadows at Waterhead 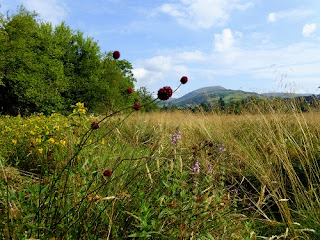 and English Heritage looks after the remains of Galava Roman Fort. Not much to see here since most of the stones were carried off for building in Ambleside, but it's an attractive setting, especially with no-one else around. 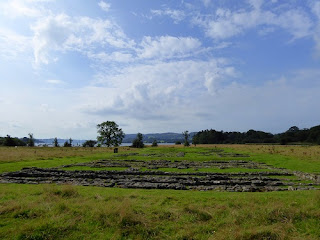 Clearly bathing where the Romans would have done so wasn't ideal, so I found a rocky outcrop in nearby Borrans Park. 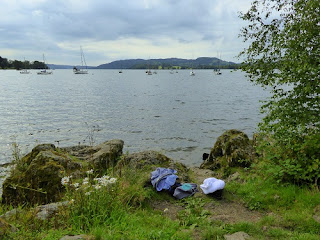 A warning about a rather nasty blue-green algae in the lake made me wary, but the damage actually came from a rock which left me with a black toe - amazing how quickly the bruising went down with Arnica cream. Didn't much like the oozy weeds twisting around my legs either, but otherwise managed to keep swimming towards the boats and back. It was a sticky but mostly rain-free weekend; the bad weather only set in when I was sitting on Windermere Station for the train to Oxenholme and thence back, uneventfully, to London. A week later, and there would have been trouble. 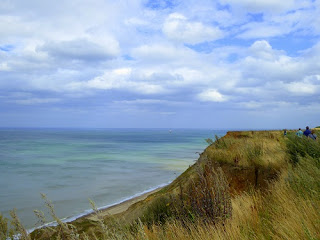 We were very much on the fringes of that while staying in North Norfolk with our friend Jill for the Southrepps Music Festival - the best yet, that I've experienced, at any rate, with unsurpassable performances from, among others, Ben Baker (best Bach Chaconne either I or David Parry have ever heard live), festival doyen Ben Johnson (peerless in Britten's Serenade, with the equally magnificent Martin Owen and Parry conducting a first-rate string group led by Ben), guitarist Sean Shibe creating his usual hold-your-breath magic, Jonathan Bloxham on a flying visit as cellist in breathtaking Mendelssohn Second Piano Trio - ah, that chorale moment! - and two young pianists, Martin James Bartlett and Daniel Lebhardt who both dazzled in two different concerts on the same day and who, I kid you not, cast an erratic Martha Argerich at the Proms last night in the shade, for fine tuning with colleagues, at any rate.

But there are also the swims, walks and crab/lobster lunches at the Overstrand shack to be accommodated. We managed two of the three on Saturday afternoon, but high winds and sea swells meant friend Cally and I didn't take the plunge then. You can see the white horses here, 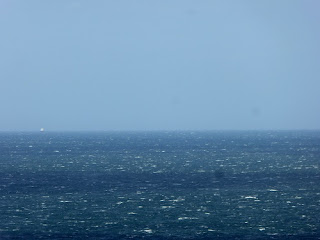 and just over this cliff with the last of the Alexander there had been a big collapse in June. 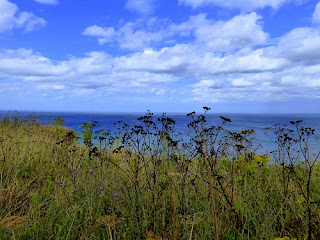 Anyway, we got our bathe on Sunday lunchtime between Bach/Mendelssohn and an excellent lunch at the Vernon Arms back in Southrepps. Thus the beach 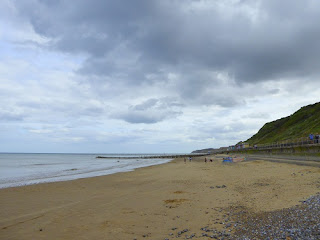 and the view from above on the walk back. 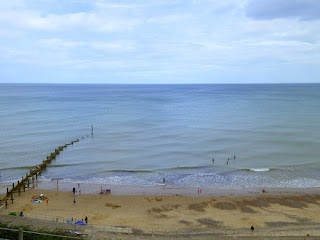 In about a month we return for our annual churches walk. The gifts of these wonderful retreats just keep on giving - but I hope, in terms of fundraising for the Norfolk Churches Trust, we give back a bit too.
Posted by David at 21:37

You have a wonderful tradition going there, with your swims. We do nothing more strenuous than loll about in our (unheated) pool, but we always feel refreshed after, in a way nothing else does so well.

Well, you see, for those of us without pools, unheated or otherwise, needs must... Though I have access to the Virgin Health Club part of Fulham Pools round the corner, and use it, but dutifully, not enthusiastically.

Haha, yes, it does seem a bit posh to have one’s own pool. We haven’t really ever got used to the idea of it, in actual fact. I do marvel, in return, at your wide travels to such gorgeous locations, and your seemingly unstoppable ability to make the most of everywhere you go.

All I really want is a quiet place in beautiful countryside, with a big garden and a dog that can enjoy it. Swimming pool not necessary but I wouldn't sniff if it came with it. Don't want to give up London, though, so for the foreseeable future country retreat isn't an option.

Well understand your conundrum! We are in the process of “downsizing,” which means selling our place here, which isn’t tenable now that we are both retired, and moving back full time into NYC. I wouldn’t dream of giving up NYC, and yet, and yet . . .

Oh no! We have to get there before you leave...maybe 2020 will see the change necessary to allow it, if you're not gone by then.