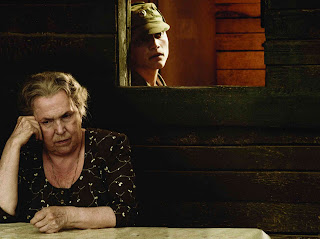 Who’d have thought it, the redoubtable one-time diva of the Bolshoy in an understated gem of a screen performance as a Russian grandmother? We knew Galina Vishnevskaya, always in the past hovering between dramatic truth and the grand manner, would go for truth given a chance. And half a chance was all she had in her film debut back in the 1960s as Shostakovich’s (originally Leskov’s) Katerina Izmailova, a performance which wavers between astonishing realism and silent-film gestures writ large. That maverick director and master of interior mood Alexander Sokurov – amen to his survival in the current climate of Russia – says he knew Vishnevskaya could be relied upon to be, and to look, the opposite of the archetypal filmstar. Without her Alexandra, his enigmatic fable of an elderly woman visiting her grandson in a military camp down south (Chechnya, we presume), would never have come to fruition.

Vishnevskaya’s Alexandra Nikolayevna - baffled but tenacious, sighing a thousand ‘oy, oys’ at the resistance of her tired limbs but emotionally sharp as a knife – cuts a quietly extraordinary figure as she travels to her bleak destination and shuffles around the camp; you can see the amazement in the half-deferent, half-puzzled eyes of the young recruits she encounters. Contrast to this bleached, desultory life finally comes when she stubbornly wanders off to the nearby market and befriends a Chechen woman (Raisa Gichayeva) who offers her tea and rest in her half-destroyed apartment block.

There are scenes of tenderness between the two women as well as between Alexandra and the grandson she accuses of being a killing-machine, but what’s said – which always seems to be overheard rather than heard distinctly, to be improvised Mike Leigh style rather than hewn out as words of didactic significance – is less telling than looks and gestures. As with another strangely-rooted film we caught up with recently, Louis Malle’s My Dinner with Andre, you don’t think it can work in the first quarter of an hour, but you end up mesmerised. A whole world has been created in Sokurov’s not so little masterpiece. Curiously, by the way, the memorable image of Alexandra passing a group of soldiers has been edited on the Artificial Eye DVD cover to lop off Vishnevskaya. Here she is rightfully restored in the French release: 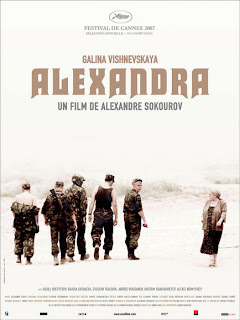 I interviewed Vishnevskaya back in 1988, when she agreed to talk about her part in the towering Decca recording of Britten's War Requiem; it was then due to receive another lease of life as the soundtrack to Derek Jarman's film of the same name. I guess around then she would have looked something like this (forgive the lack of date and credit; if anyone can supply them I'll be happy to insert). 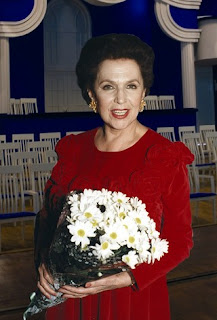 The great lady reminisced about the huge Aldeburgh recital she gave which inspired Britten to create the soprano role in the War Requiem for her, insisted that Shostakovich - who wore out his Decca LPs - 'said that it was - not one of the greatest contemporary works, but the greatest' and told me that she and Britten got on so well because they were both essentially 'very shy people - and this may surprise you'. It did, but I came to see what she meant.

Ah, skolko zim, skolko lyet, as the Russians say – and where the hell have I been these past months? Lying low, making only the occasional excursion to essentials (such as Doctor Atomic, which did not disappoint), reading reams of Dervla Murphy, working when I could, cultivating what little garden I have. Hopefully that phase is coming to an end and it’s back to the more active life again, but thank you to those who expressed their concern.
Posted by David at 21:05

Delighted to see a new post pop up among my RSS feeds. I've missed your thoughtful posts. Looking forward to seeing Alexandra. It's available for instant viewing through Netflix here in the US so maybe I'll get to watch it soon.

I hope you do, William, and let me know what you think. Sokurov's work is certainly an acquired taste but, love it or hate it, no-one I think could fail to be impressed by Vishnevskaya's performance. The film stayed with me which was why I felt impelled to write something about it on the blog.