Always in the midst of it 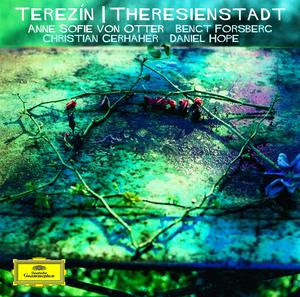 Even those of us who have long admired the integrity and wide-ranging artistry of the Terezin/Theresienstadt disc were rather astonished by the extended scope of last night's programme at the Queen Elizabeth Hall. One of my favourite and longest-lasting muses, Anne Sofie von Otter, had the musical intelligence and generosity to share her tribute very equally with her long-term pianist, the quirky and likeable Bengt Forsberg, and the man whom I'd already marked down as one of the world's top violinists when I heard him play the Britten Concerto, Daniel Hope (and how he merited that title yesterday evening). Bebe Risenfors was there for support, but where would some of the numbers have been without his sensitive guitar accompaniment or his double bass 'n cymbals double act?

But this was not about first-class performers showing off. It was a totally integrated and beautifully shaped homage to the sheer vitality and the many musical possibilities discovered by those extraordinary human beings caught in the hell of the Nazis' show-camp. Like this concert, they refused to succumb to sombre lamentation. As inmate Viktor Ullmann put it, 'we did not simply sit by the rivers of Babylon and weep but evinced a desire to produce art that was entirely commensurate with our will to live'.

'Always in the midst of it', as runs H G Adler's text for a turbulent Ullmann song new to me, the Theresienstadters could parody the sentimental, touch on the gift to be simple and also produce some truly great music. One could weep at but not wallow in the elementary songs of the courageous Ilse Weber, the children's nurse who insisted on accompanying her charges to Auschwitz. What Anne Sofie tactfully, or maybe to steel herself, did not mention before the final Lullaby was that eyewitnesses report Weber singing it to the children in the gas chamber. Von Otter ended it on the merest sliver of sound. But she could also pull off the pants-kicking exuberance in the last of her selection from Pavel Haas's Folk Style Songs, the complexity of the Ullmann settings and the showbiz panache of the inmates' wry rewording of a song from Kalman's Countess Maritza. Here's a recent shot of the lovely lady by Mats Baecker. 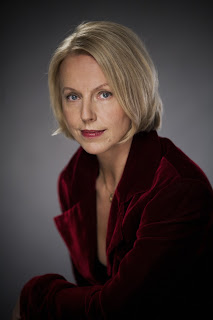 Forsberg, too, had his time in the sun, if that's the right way of putting it, and in any case his twists to the songs were always striking. He deserves a photo, too. This one is by Mona Bjorklund. 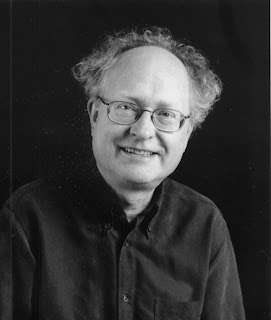 He conveyed the full anger of the second movement from Haas's Suite for Piano and did his best with Berman's Reminiscences (though for me these were the only pieces in the evening where the musical substance didn't live up to the programmatic aims). He also worked in fierce focus with Hope to sear our souls in the second movement of Schulhoff's Second Sonata. Here's the great white Hope of British violinists as snapped by Felix Broeder for DG. 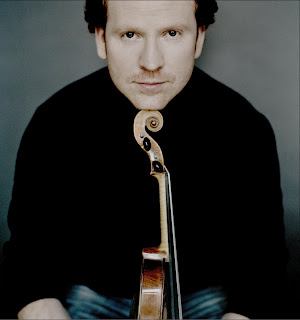 The biggest coup of the evening was to follow two movements from the same composer's Solo Violin Sonata with the Siciliano from Bach's Fourth Violin Sonata. Something of the sort would have to appear on a putative second CD from the same team (and there's easily enough material to make it worthwhile). This was balm to us, of course, but a reminder of the air from another planet for the inhabitants of the model ghetto during those extraordinary recitals where Bach, like many of the new pieces, would have symbolised, as Ulrike Migdal's supremely eloquent note put it, 'their adherence to a European cultural tradition from which their persecutors sought to expel them'. Though it's curious, too, that many of the most integrated, like anthroposophist Ullmann, rediscovered their Jewish roots in Terezin. 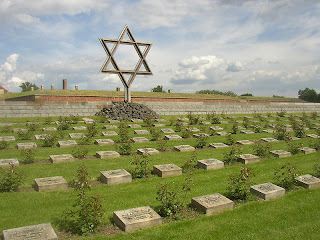 So, I was at the same concert. But though I sat there until half-time thinking "I should be really moved by this" nothing much happened. I can't quite put my finger on it, but a few factors come to my mind. I found Von Otter quite ill at ease, unstable physically and the lines of the melodies didn't flow. Feet fidgeting and hands clawing her thighs, it was an uncomfortable experience to watch, though she produced some exquisite sounds.

And what are we to make of Mr Hope? I've heard him a lot in the past few months, and yet again, last night, though he did everything flawlessly, he impressed but didn't move. Perhaps it's the overloaded vibrato, or the visible showiness, or something else, but I don't feel he talks to me. Actually, I found his reading of the poem more intimate than anything he played.

As to the music, I think I heard a disjointed sequence of bland pieces, poorly linked by readings by some distinguished musicians who were either ill at ease, or didn't bring themselves fully to the party.

I speak only of the first half, of course.

Curious, but common, that two people should have such different experiences of the same concert.

I did notice Anne Sofie's hand clenching, but I thought how far she's come in communicating. And how much more physically relaxed, in fact, than the ones who are really unbearable to watch and who don't convey the musicality through their movements - chiefly Kozena, Bostridge and Goerne.

As for Daniel Hope's
vibrato, well, as with singers, that's a matter of taste, surely? Some prefer a more inward mode of delivery. But I thought the intensity was well directed and suited the Schulhoff. His Bach was a model of restraint and conveyed so much more than the Mullova recording I put on this morning.

And believe me, I'm not out to be moved by something just because the subject tells me I ought to be. In fact the audience immediately inclined me to resist. But once it all started, I felt I was going with an undoubtedly strongly felt and keenly channelled flow.

Now, I rather wish I'd heard Hope's Bach. He can do pretty much anything with that talent.

Of course, we are in a different world with Von Otter. She's a very honest performer - and person, I suspect - and her awkward physicality seemed to come more from an impulse to be expressive without knowing how her body should behave. It was nothing like Bostridgian twattishness or Kozena's look-how-deeply-I-am-feeling-this posturing. I wish someone could say to Von Otter that it's OK just to stand still and mean what she says - it might have relaxed her.

Perhaps, as far as the theme of the evening was concerned, I am a victim of expectation. In a more extreme example of the same thing, I was at Auschwitz earlier this year. Apart form a sense that I wasn't getting the whole truth about what happened there, I didn't feel much either during the visit or afterwards. On the other hand, after a few pages of Primo Levi, I need time for my insides to recover.

Well, your words in both cases were measured and thoughtful (whoever you are!)

Again, we had different experiences at Auschwitz. I hadn't intended to go when I was in Poland some years ago now, but being in Krakow and seeing all those elderly Jews on their pilgrimage - as well as being at an unbearably moving performance of the Bruch concerto by Wanda Wilkimorska - made us feel we should.

It was, of course, a very mixed experience. On the one hand, there were the parties of glazed looking schoolchildren and some casual recent graffiti, as well as the loud Israelis bellowing 'photo me under 'Arbeit macht frei!' 'Get me by the ovens!'. On the other hand, our Polish guide was firm and dignified, just told us the facts, saying 'remember this'. And I was completely overcome by uncontrollable sobbing after the piles of shoes and prosthetics.

So, yes, I don't regret going.

Wilkomirski, I should have written (can't be doing with binning that and starting again). Her ?husband? Josef conducted. The Tchaikovsky Five following the Bruch was turgid and rather odd - he'd added cymbal crashes to all the climaxes, as I understand they often do in Eastern Europe.

They say that Birkenau is less tended and more impressive, but I didn't have time to go there as well. Dachau was irredeemably bleak, I remember (I'm not a K-L tourist, by the way, though I passed Mauthausen by chance last week).

I thought that wandering around the old Jewish quarter of Krakow was very worthwhile - just to think of the everyday life of shops, synagogues, alleyways - just gone.

Auschwitz was rather pretty the day I went - deep blue sky and those avenues of trees in early leaf. Bemused teenagers lining up under Arbeit Macht Frei, yes, but not irreverent and none of the Brooklyn loud crew.

Added cymbal clashes? Is nothing sacred? Krakow Phil are alright, if a bit dour, and the concert hall is lovely.

"By the waters of Babylon, there we sat down, yea, we wept when we remembered Zion.....For there they that carried us away required of us a song... saying, Sing us one of the songs of Zion.....

How shall we sing the Lord's song in a strange land?"

In fact, as Viktor Ullmann reports,at Theresienstadt they DID sing of life and hope in a land not only strange but terrible. Amazingly commendable and admirable

Indeed. Which is why, given the right sort of dedicated performance, all these songs, from the simplest to the most avant-garde, can have their effect.

Incidentally, I was rather cross on the performers' behalf that the Guardian review yesterday was headed 'Anne Sofie von Otter' and didn't, if I remember right from a tetchy skim, mention the other artists.

Gerhaler is very striking, by the way, on the CD.