The only way is Up 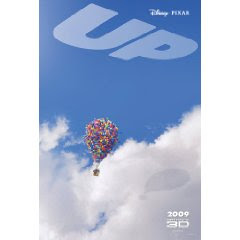 What I suppose I mean is that there's no going back on the unsentimental presentation of human loss in this little masterpiece, issued - wonders will never cease - under the Disney aegis but made by the Pixar geniuses who brought you Monsters, Inc. Indeed, if we're talking about rank, I'd be tempted to slip this in just above that earlier jeu d'esprit and even alongside both Toy Stories.

In any case, Up is unique. The heroes are a grumpy old man and an annoying chubby child, with cute relief from an exotic bird and a talking dog. Within minutes, the narrative takes you through the senior hero's life, sensitively touching on his wife's loss of a child and later her death. Can you believe parents have complained about this? I echo Maurice Sendak's 'ya boo sucks' sentiments to similar cries of 'too scary' about the cinematic version of Where the Wild Things Are (even if I can't imagine that timeless work extending to a full length film). And I quote John Burningham on a private view of the film based on his book Granpa:

When the picture of the empty armchair came up on the screen a small voice in the front row asked 'Where's Granpa?' The adults each side of me reached for their handkerchiefs. The children, however, were able to accept the ending without tears.

Up, anyway, embraces a huge, far from facile optimism and great visual beauty. It does everything a great work of entertainment, dare I say of art to boot, ought to do: it makes you laugh, cry, reflect. And there are no cheesy songs; the musical score, except in the stock conflict sequences, is sensitive and sweet. I'm not sure if any of this was enhanced by the 3-D version we saw in Brixton's Ritzy Cinema; that was just an optional extra to an already dizzying experience.

So what was I doing watching Up at the pictures in the first place? I doubt if I'd ever have gone had it not been for the fact that I needed to meet friend Simon's partner Patricia, an actress of no small reputation, to get her to record three scenes from Timberlake Wertenbaker's adaptation of Jenufa, the Gabriela Preissova play which inspired Janacek's now much better-known opera (strictly speaking, the original title of both the play and the opera was Her Stepdaughter, which throws the emphasis on to the Kostlenicka, portrayed below by the wonderful Paola Dionisotti). What I thought of the first UK production, which cried out in vain for a West End transfer, is here. It looks from the Faber website as if you can still get hold of copies of the play. 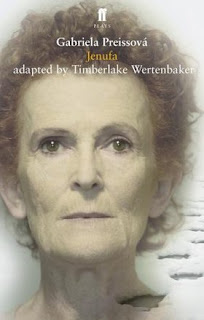 Suffice it to say that Simon was taking daughter Evie and her friend Tanisha to see Up, and we tagged along, afterwards resorting to Simon's car down some noisy Brixton sidestreet trying to get the speeches right. The aftermath I hardly dare report on, other than to say that another Simon, the hard-working sound and vision man at Glyndebourne, is still trying to retrieve the information from a recalcitrant minidisk. I've had it with those machines; technician Simon is going to set me on the right path when next we meet.

So to another film with some resonance, the Flemish director Johan Grimonprez's singular take on a divided Alfred Hitchcock in Double Take. 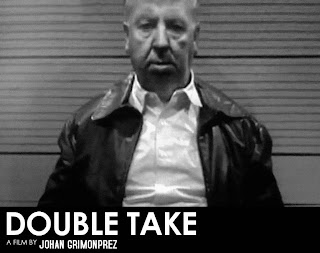 Presented by the personable Jonathan Romney at the London Film Festival on Friday, this has fascinating things to say about the divided soul and the doppelganger - partly springing, it was later suggested, from the Belgian split/division between French and Flemish. The film makes a lot of the likeable man who was Hitchcock's official double, and all that is amusing, especially the play on Hitchcock's 'McGuffin' appearances in his own films. 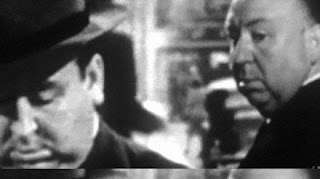 I liked, too, the conversation with an older self taken from a Borges story. I was less convinced by the links to world events at the time, from Khrushchev's bizarre off-air spat with Nixon to the Cuban missile crisis and, ultimately, beyond. Still, this made a musical counterpoint and it did make me keen, in a nervous kind of way, to see The Birds again with fresh eyes.

Let's end with another fantasy of genius, Kurt Vonnegut's Slapstick or Lonesome No More! 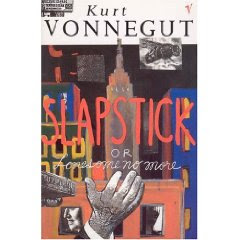 Surely this dystopian tragicomedy has the best back of jacket blurb ever, which I'll use to intrigue you:

Wilbur Swain and his twin sister Eliza are so hideous, helpless and vile in their infancy that their parents are forced to rear them in the seclusion of a nearby asteroid. But behind their idiotic facade, this monstrous pair possess a joint intelligence capable of outstripping the most advanced computers.

Now, as America collapses into anarchic decline, and pin-size Chinamen pollute the atmosphere, President Wilbur Daffodil-11 Swain sits in the ruined remnants of the Empire State Building and tells the extraordinary story of his life and times.

Partly to prove to you that I've read beyond, can I quote my favourite of many excerptable passages? Wilbur tells us about the anti-loneliness ('Lonesome No More!') campaign which wins him the presidency:

I said that all the damaging excesses of Americans in the past were motivated by loneliness rather than a fondness for sin.

An old man crawled up to me afterwards and told me how he used to buy life insurance and mutual funds and household appliances and automobiles and so on, not because he liked them or needed them, but because the salesman seemed to promise to be his relative, and so on.

'I had no relatives and I needed relatives,' he said.

'Everybody does,' I said.

He told me how he had been a drunk for a while, trying to make relatives out of people in bars. 'The bartender would be kind of a father, you know - ' he said. 'And then all of a sudden it was closing time.'

To find out more about Wilbur's scheme for a network of relatives, and the concomitant reason for 'Daffodil-11', get your copy here. I'm only a salesman when I believe passionately in the 'product'. And I realise that 'I believe passionately' has become marketing jargon, but does that hijacking make it any the less valid?

Went the day well? I should say. This is my idea of a break after many hours writing a programme article on another weird tale, Bluebeard's Castle, for the English National Opera. So engrossed was I that when I finished I guessed it was lunchtime; it turned out to be 4.20. Strange sensation.
Posted by David at 16:35