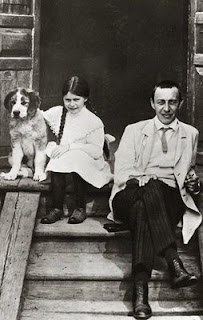 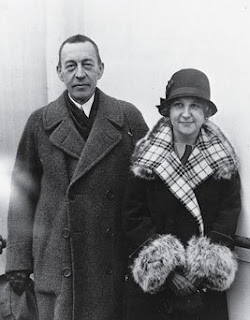 They write Rachmaninoff according to the composer's preferred transliteration in the USA and Europe, I write Rachmaninov, but I couldn't get on better with the passionate souls of the Rachmaninoff Society. Some of these one-composer fan clubs - mentioning no names - are peppered with obsessives who always know best and can't string a sentence together about their chosen hero in their hand-typed journals, but the RS isn't like that at all. A Dutch duo runs the show, the amiable Wouter de Voogd and the wise, enthusiastic SVR scholar/performer Elger Niels who edits the beautifully produced biennial magazine The Bells, and there's a highly professional treasurer/publicist, Judicaelle Hammond.

The first of the above images I saw for the first time in the Feb 2008 edition of The Bells: there's Stravinsky's 'six-and-a-half-foot scowl' actually smiling with daughter Irina and doggie at the front door of his country house in Ivanovka, summer 1910. He's almost smiling again in the second picture, taken some years later in the company of his other daughter Tatyana.* Well, it's high time I tried to give a succinct account of the big Rachmaninov day at Chetham's School of Music, Manchester. 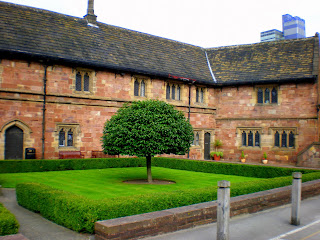 The audience was small but very involved so the guest of honour, French-American veteran virtuoso Francois-Joel Thiollier, was more than happy to give his all, and even, I'm told, a spontaneous farewell recital on the Sunday which I wasn't able to stay and hear. After engaging vividly with Elger's lecturing demo of Kreisler performances, and immediately pinpointing Viennese style, the lovable polymath enlightened us in two masterclasses. Elger took the first of the weekend's pictures, Wouter the one of Thiollier solus, and the rest are mine. 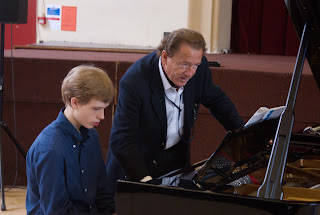 Thiollier's first masterclass was with Chets protege Niklas Duckworth, who plunged straight into the fiendish transcription of Mendelssohn's Midsummer Night's Dream Scherzo. The famous audition cry of 'did you bring any Mozart?' was implied in Thiollier's first gentle request that Duckworth play something simpler to ease us in, but he didn't. But by the end of the hour his understandably nervous flight had eased into something fuller-toned, better phrased and airier.

There was then rather more on-the-level coaching of an already formidable professional 26-year old Ukrainian, Ivan Hovorun, who played the first movement of 'the Rach 3' with his charming and expressive mother Lyubov acting as first-class orchestra. Again we had more flashing virtuosity shaped into something more musical and, yes, sonorous (Thiollier has a whole cache of knowledge about Steinway pedals which would make an essay in itself). I was told he didn't mind me filming and using just a couple of portions. Forgive the sound, which in no way reflects the real sonority of the Steinways. The first clip is short and deals with making the second subject sing

while the second, four and a half minutes long, gives us the Hovoruns creating an impact in the development before getting even better results under Thiollier's vigilant guidance. This speaks for itself, I think.

An amazingly good Chets canteen lunch with the Thiolliers was followed by a recital from two more adorable people, Bulgarians Valentina Seferinova and Venera Bojkova, who style themselves the 'Piano Duo Va i Ve'. Their personalities are nicely contrasted, their presentation immediately draws the audience in, and I loved the first two of the three pieces they played by compatriot Pancho Vladigerov, Mar Dimitro Iyo and the Chant Op. 21 No. 2. I was rather surprised to find that Lyubov, sitting next to me, knew the latter and explained why it was so difficult. The Duo's touch was elegant and full, their tempi for Shostakovich and Rachmaninov perhaps a little more controversial. But how wonderful to know that there are forces for the good like this teaching and performing all over the UK. Here are the delightful ladies after their recital. 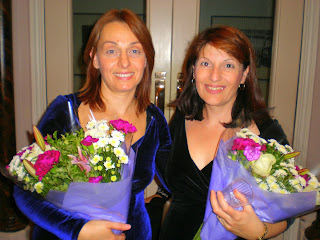 They came to my talk, lured, I think, by the Rachmaninov four-hand transcription of Tchaikovsky's Sleeping Beauty which I was able to illustrate (though not live - Va i Ve had given some thought to sight-reading excerpts for me, but were very hungry and tired by 5pm). I was followed by the Chairwoman of the Russian Rachmaninov Society, Tamara Parshina, who took me aback with her emphatic and very focused love of the composer. Here she is at breakfast the following morning with Elger (centre) and Wouter. 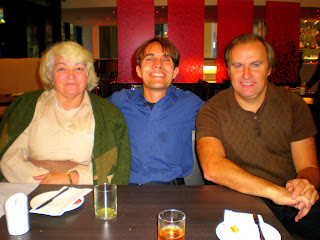 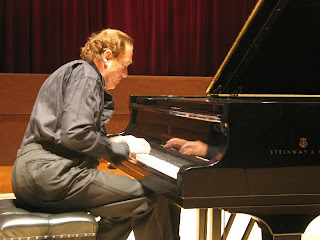 There were only fifteen of us in the audience, but it was a choice assembly, including Ivan and Lyubov. 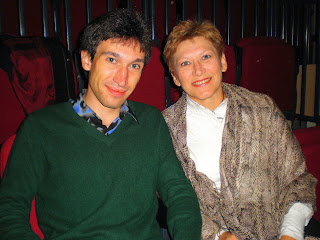 We stood without hesitation - and were rewarded with Scriabin's Nocturne for the left hand (which I recognised only because I'd picked up a tatty copy of the original Belyayev publication in Bristol's Amnesty bookshop). I'd have liked to stay on Sunday to hear Hovorun's recital and a demonstration by passionate Rachmaninoff Society trustee Dr. John Malpass of the latest attempt to 're-make' SVR's 78rpm recordings by Zenph Studios on a Steinway Model D Concert Grand (soon to be released on Sony Classical). After Sunday breakfast, though, I had to hop on the train back to London and finish the Martinu script. Anyway, warm congratulations to these enthusiasts for the vision to carry through so memorable a meeting of international musicians. Do join them; I've signed up for the next three years.

Caught a glimpse of another Ukrainian giant-in-the-making, Alexander Romanovsky, in a Wigmore lunchtime on my return from Cardiff. Like Thiollier, he didn't stint on his programme, and again variations were at the core. Brahms's two sets on the famous Paganini theme took the breath away - crisp, clear, and with the outlines of the theme always emerging through the latticework. I don't think much of Shostakovich's early Aphorisms - they sound like accomplished improvisations, and I wonder if they'd still be performed if they'd been composed by a lesser name. Prokofiev's Third Sonata is a different matter. Romanovsky stretched the limits of the tearaway possible in the coda, though he never bashed. Yet one more to watch. Photo by Hanya Chlala. 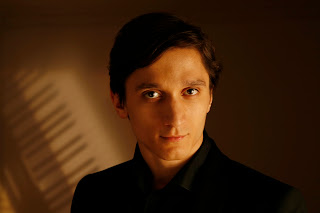 Since then, and all the Martinu and Musorgsky work, I've been dodging the big emotional battleships, including the Royal Opera Tristan - for me, nothing could follow the Glyndebourne experience so soon, however good Stemme might be, however challenging Loy's production - and the concert Wozzeck with Simon Keenlyside last night. I need gentle, happy music for a bit, but I'm not going to get it in at least part of tonight's BBCSO concert. I'll be in the box with Petroc Trelawny reacting to the bracing Martinu 2 - just as special as the other five, I reckon - Strauss's Four Last Songs with the divine Schwanewilms, Mahler 10 Adagio and Strauss's Till Eulenspiegel. Listen on Radio 3 at 7, and if you're coming to the concert, do try to make the talk at 6.

*These images weren't provided by the Society, but I hope the owners will deem this 'fair use' in the cause of SVR.
Posted by David at 12:46

Thanks David for this great report (and video) of what was a wonderful Rachmaninoff weekend despite the small amount of delegates.

And thank you, Wouter, for such warm hospitality and excellent company.

Hi David
Mike Bradley here – husband of Valentina (Valya) Seferinova; one half of the piano duo ‘Va I Ve’.
Rather stumbled across your blog – but on behalf of the girls may I thank you for your kind and positive remarks (it makes it all worthwhile!)

Although we didn’t meet – I was at Manchester too – but perhaps a little hidden (!!??) In truth immediately after the girls performance I had to dash to Halifax (that’s another story) and returned later in the evening to collect Valya for the return journey south.

How can I ‘prove’ I was there? Well I was behind the camera above the audience.
Go www.valentinaseferinova.com scroll down the keyboard to ‘YouTube Videos’, click, and by clicking on your choice of link you’ll be able to see and hear the Vladigerov pieces you speak about above, + Prelude in C # minor; hope you enjoy the recapitulation (or is it reprise?)!
Regards
Mike ‘n’ Valya ‘n’ Venera

Trying to remember if I sent Valya the photos. I certainly had her e-mail and thought I'd alerted her to this. Sorry you had to stumble across it.

Will look with pleasure at those YouTube films and certainly put one of them up on the blog as a happy reminder.

You see, the crowd was small but good things have ensued for all of us from the charmed circle.

Ding! (Sound of small light bulb going on in my dull brain!!) – Yup – we DID meet!!
Sorry – my mistake (Excuse follows: It was a hectic afternoon for me, with a lot going on; didn’t fully register all of the details going on around me! There’s only so much multi-tasking a man can do!!)
However – I don’t believe Valya received any photos – but we have had a major PC crash since Manchester requiring a new motherboard and since installing it there’s been 1 or 2 hiccups (understatement! sic) so could have been inadvertently lost.
However – can copy the pic. from your blog above for the ‘Va I Ve’ archive but would be grateful to receive any others you may have (send to vs@’hername’.com; ‘hername’ deliberately left as that – if you follow!!??)

Quite happy for you to link/embed 1 or more videos on your blog. Not a prob. Anything that helps to spread the word about Valentina and/or Venera, either individually, or collectively as ‘Va I Ve’, is welcomed (and for which I extend my thanks in advance. No pressure!!??)

Well, having said that, I'm now not sure I DID meet you, because I was thinking of the husband who turned the pages - and since you were behind the camera, that couldn't have been you.

Anyway, have already been in touch with Valya and will post the marvellous little films (sound left and right, how clever) when the opportunity arises.