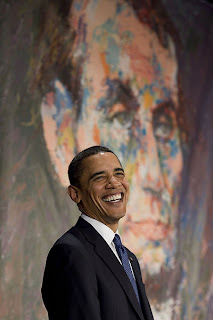 Yes, he has a long way to go. Sure, he's hedged around by inflexible self-interest groups and will be lucky if he pushes through a fraction of what he wants. But I do believe Obama genuinely wants it and I find it so dispiriting when I see American colleagues saying, oh, he's no different from a Republican leader.

The Nobel Peace Prize is one in the eye for all that. Look at this for some disparate reactions from around the world.

And why Lincoln? Because I was amazed to see the only footage apparently taken of Senator Obama, as he then was, participating in Copland's Lincoln Portrait with that admirable conductor William Eddins and the Chicago Symphony Orchestra back in 2005. The one-minute clip isn't of a high quality but it does catch some uncannily prescient text.

So the Prize, whatever its pros and cons, is an encouragement to Obama to stick to his guns and do more. You can reinforce the message by signing Avaaz's petition. This is a fine organisation capable of effecting real change, and it has already done so. So join the Rachmaninoff Society (pace my last entry) AND support Avaaz.

On a trivial note, look, too, at the fabric Sophie sent us from Mali, where most people are still Obama-crazy. We used it as a temporary curtain when the builders were doing their stuff. Barack and Michelle are back to front, but the neighbours in the mews would have got the full message. 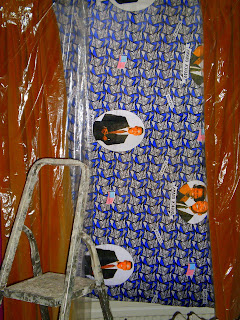 I myself am basically a right-wing Republican, but am personally not as uncomfortable with President Obama as I feared I might be, and have _NO_ objection to him having won the Nobel Peace Prize!

As per rreferences to health in my last two comments elsewhere, I am facing possible kidney-stone surgery, and yet my greatest worry is the cost, not the surgery itself. I do not profess to know what would be the best course as per healthcare reform, but hope it can somehow be seen to without unduly increasing our already-excessive ddebt.

Well, good to know that though we view politics and religion quite differently, music can still be a common ground.

I was rather surprised to see that Margaret Thatcher, bete noir(e) of our student years, performed the Lincoln Portrait here with the LSO.

Mrs. Thatcher, when speaking to a joint meeting of our Congress while Prime Minister, made it quite clear that she was an admirer of Lincoln.

Sacrificies like this - not so much the Nobel Prize but the world wide adulation and excitement that gave rise to it - should be burnt only to the Gods. It is one of the dangers of our evolutionary inheritance that we respond too positively to charismatic leadership, to people who say the things we want to hear, who make us feel that we can identify with them. This is not the way to choose leaders in the modern or perhaps any world. Even though with such a following the chosen leader will find doors to opportunities usefully opening, such a personality may otherwise not be efficient at the business in hand, especially as detached and calm judgement is not assisted by an atmosphere of emotion and hope.

Worst of all, and the most terrible of the dangers, is that these sacrifices corrupt the recipient. A man is not a God, eternal and unchanging. Even if he remains calm as the incense and smoke of the burnt offerings curl around him, and even if the conscious mind believes itself skeptical and free of this corruption, the subscious soon begins to feel like Tamberlane the Great -

"I hold the fates bound fast in iron chains, and with MY hand turn Fortune's wheel about"

And who, as he sits in his gleaming White House, is to whisper in his ear, as in the triumphal chariots,"Remember that thou shalt die" ?

Once a month the President should go to a Greek Tragedy and immerse himself in it. Then in the words of Aristotle he will - or may - purge his emotions with pity and terror, and suffer a catharsis. And therefore see the world in perspective. In any case we are in act one of another play.

Indeed, the world places too much excited faith in charisma and words. That and the sense, to us at least, that all they do and say in America is theatre result in the opposite reaction ('he's the same as as Bush') when things don't go as imagined.

None of this changes the fact that Obama in his incredibly powerful position can alter the course of events, and to a certain extent has already. Daily I see a small minus added to the handful of big pluses - one commentator, for example, reminded me that this week he withdrew funding for the civil rights organisation in Iran.

He can't hope to push through everything he wants. but the fact is that he has done so already. Look at our Labour government, so disappointing in its later stages. And yet to say 'they're the same as the tories' obscures the fact that in their first year of power they DID introduce the minimum wage and made it possible for me and anyone else who wishes to enjoy equal legal rights by embracing civil partnership.

Even that was something. And, yes, there's a hullaballoo over a prize. But it does, as I wrote, give an incentive to Obama to carry on doing what he promised.

Greek tragedy will only come into it eventually when his career, as all politicians' do, ends in failure. All the more reason to applaud his idealism now.

PS But I take your eloquent gist about men and gods, David.

Not all politicians end their career in failure. For example, the Duke of Wellington - who just went on and on - and Churchill, who had an amazing Indian Summer in office and retirement. Of course they could have done more, but that is also true of politicians in their prime.