Red and Ellie go to Glyndebourne 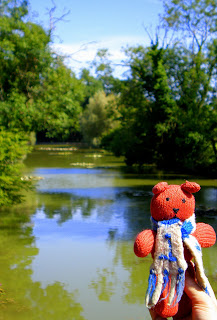 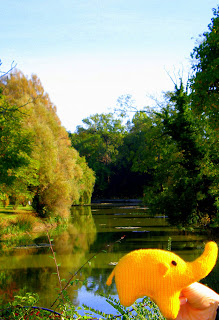 In case you think I've taken leave of my senses, this can pass as performance art - a homage to the vivacious Edwina Ashton, who came with me to Tristan and whose partner Kit sent Red along (he's really Mr. Red, but I am permitted to be on intimate terms). Edwina makes life-size animal costumes in the style of children's toys, dresses up in them and re-enacts the futility of life: a squirrel absently sifting nuts, a Sisyphean dung beetle struggling to push a ball upstairs, a mouse aimlessly sifting through a fashion magazine on the beach. These films have real pathos, believe me. In a forthcoming drawn animation, her first, she creates a 'bad tempered, removed and extremely precise elephant living in a crumbling hotel on the shores of a Swiss lake'. That would be Mr. Pantz, aka the Reverend Panticules and others, her own familiar. You can see she is as much of a one-off in her descriptions as in her art. Adorable Edna!

She took me to the Zoo Art Fair in Shoreditch last Friday, down a dark alley guarded by a luminous angel (the film grain is my attempt at art). 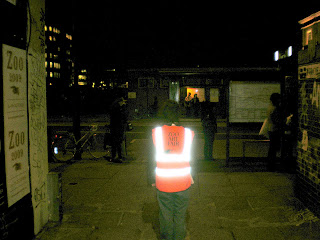 To be frank, I enjoyed the Dickensian warehouse stairs and rooms more than the video shows, but I liked the authenticity of the young people in Edna's quarters, in marked contrast to a lot of the fakery on display at Frieze (or so I'm told). Here she is by her little display, part of the Bristol Works/Projects 'pavilion'. 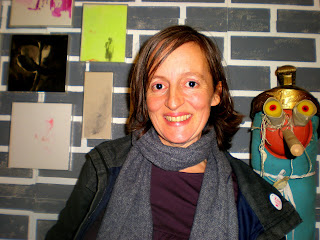 Anyway, while Ellie - manipulated up above by a bemused Amy Bere of the Glyndebourne Education Department - preferred the lake, I was very happy to be part of an amazing all-day event in the Ebert Room. This matched collaborating with the inspirational Vladimir Jurowski and Daniel Slater on Prokofiev's Betrothal in a Monastery a couple of years ago. After me came moderator Julian Broughton, under the aegis of whose University of Sussex Community Engagement Centre the day took place. As a composer - in this case a re-composer - he gave us a vivid demonstration of how 'In tears' from Janacek's On an overgrown path would sound if conventionally shaped. Then, after an excellent early Christmas dinner in Nether Wallop, we re-convened with key members of the creative team working on the Glyndebourne Touring Opera revival of Jenufa.

We heard three covers, all of whom we were soon wanting to see in the complete opera. Miranda Keys sang Jenufa. She has a beautifully modulated lyric-dramatic soprano, heading towards the territory of Beethoven's Leonora, which she'll be singing in a few years' time. Miranda is an Aussie, and the funniest singer I've met. She could easily have a career in stand-up, and her earthy, no-nonsense approach to plot and characterisation never became arch or brittle thanks to a respect for the drama's searing essence. Then, between reducing us all to helpless laughter, she became the patiently suffering heroine at the drop of a hat.

With vivid support from pianist Duncan Williams and the occasional spur of the moment staging by assistant director Paul Higgins, the scenes worked upon were Jenufa's Act One reproaches to the feckless Steva, two very different exchanges with Laca, the man who's always loved her, and the opening of Act 2. The formidable Kostelnicka was Svetlana Sozdateleva, whose Lady in Waiting I well remember soaring in the ensemble of Verdi's Macbeth (she sang the mistress on tour). Chris Lemmings was Laca. He started off in the Glyndebourne chorus with J all those years ago, and by all accounts was a much better Caliban than Herr Bostridge in Ades's The Tempest. Here are all three after the session, Miranda on the left. 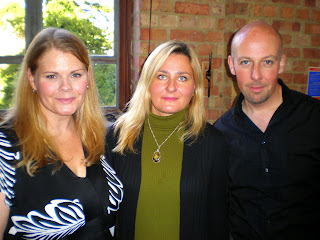 Like his colleagues, Chris seemed to understand the difficult Czech text perfectly - the covers had been engaged a mere three weeks ago, so that made it doubly impressive - though how transformed their phrases became after Robin Ticciati's suggestions. Young and loveable Maestro T is obviously another Pappano in the making, passionately involved with every line and able to grasp the essence of the language as Janacek reproduces it in speech melody. This is Ticciati's first Janacek, and he even had a coaching session with great Sir Charles, Janacek's earthly representative. I find it very moving to think of a major talent still in his twenties working with the octogenarian Mackerras. Continuity and tradition thrive. 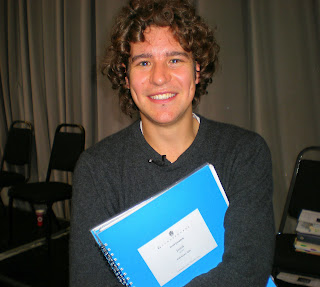 He's clearly a collegial chap, taking the time to talk to a very independent-minded 18 year old who'd just finished her week at Glyndebourne on work experience and was heading to Cambridge next year after travelling (I enjoyed chatting with her on the journey back to London). And there were warm hugs before we took a taxi to Lewes Station. Don't miss the GTO performances of Jenufa, listed here and starting at Glyndebourne on Saturday afternoon, when I'll be talking again.

Well, the future is in many good hands as far as already first-rate conductors go; so much, as I keep saying, for the maestro myth. Alerted by the Isserlis sisters at a Diaghilev talk on Wednesday, I only just caught Yannnick Nezet-Seguin (photo by Marie-Reine Mattera, courtesy of the Southbank Centre) 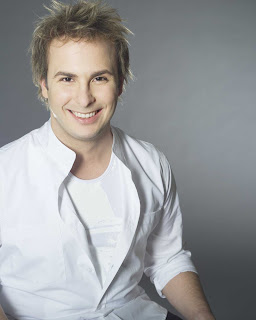 in Haydn with the Orchestra of the Age of Enlightenment at the QEH the following evening.

It was as bracing and novel in every phrase as his SCO Prom had been. 'Do hope you enjoyed Yannick as much as we did?' asked Annette Isserlis in a recent e-mail. Didn't I just. A hairsbreadth away from fussiness, his approach works because musicality pours out of everything he does, and he seems completely sincere. Quibbles first: why play the whole Trumpet Concerto on a period instrument? It's asking for trouble, and the admirable David Blackadder clearly got that more often than was comfortable for the listener. Why not demonstrate the wonderful open sound of the old trumpet in an excerpt and then turn to the reliable modern counterpart? Because this is the OAE, I suppose.

But the symphonies came across as even more of a treasury of quirky invention than usual. There was real peasant earthiness in the Surprise's scherzo. All of the Military (100)was delirious delight. Tears of joy came to my eyes in the finale and in at least three places throughout No. 104. Heck, I've been going on too long so I'll ditch the details and leave you with a picture of YNS passing a glass of red wine to leader Margaret Faultless - what a shame we can't see her lovely smiling face - at the 'Night Shift' performance later that evening. 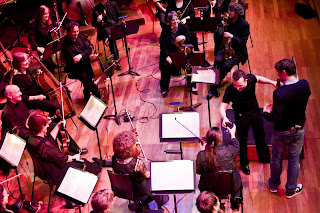 I'd have liked to stay and see how the young and trendy enjoy themselves with the new approach to classical music, but the earlier blockbuster was quite enough.

One final plug: the Discovering Music on Musorgsky's Pictures at an exhibition which I shared with Charles Hazlewood and Ashley Wass is coming up quicker than I anticipated, on Radio 3 this coming Sunday at 5pm. Don't know yet about the webcast film, which should be there in perpetuity once it appears.

*chiefly the Liebested. Sorry, I just thought of that one. Yet in fact I did meet a man who came to the Royal Opera for that alone. I know because we'd persuaded a friend to move into a seat which had been empty for two acts, and just before the third began, in he came. 'I only ever come for the Liebestod', he said. Right, at £100 plus a shot. He was duly rewarded by Gabriele Schnaut singing it nearly a tone flat.
Posted by David at 09:00

Thanks for your part in an inspiring and unforgettable day.

Just read your blog and so glad that you enjoyed the day as much as I did. It was great fun and so lovely to meet you! I hope our paths cross again soon.

Coo, a comment from a real diva-in-the-making. I've now added my, of course very much moved, response to the show but I'd still very sincerely like to see you in the title role and what Svetlana (who I was delighted to see reading by the lake on Friday, when we had a nice brief chat) might make of the Kostelnicka.

We knew the a-cast would have to be absolutely extraordinary if you three were that good, and of course they were - but merely different. With RC, I guess you'd all touch on that truth you spoke so movingly about.

Not going to bin that and start again - by RC I meant RT (wittily called 'il Maestrino' by one bloggin lady fan. I imagine he's about to acquire many more).

If you are interested, the 'covers' are doing a little 'cover show' on Wednesday at 3:15. It is only 45 mins of the music but it will be on stage, in costume and on the set with piano.

Let me kow if you can make it - would be lovely to see you again.

Alas, I can't. Paul did give me all those dates, and I was hoping to drop in for a rehearsal on Friday or Saturday morning. But I had others to keep amused. So I say a fond farewell to Glyndebourne for this year, and I won't wish indisposition on the excellent Giselle Allen, but I hope you get a chance to try out Jenufa soon.