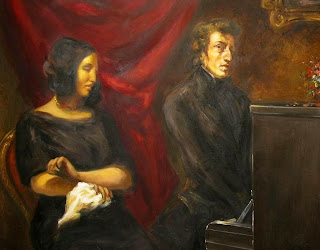 The bicentenary is only just upon us, and I've spent part of the interstitial time listening to everything in the new EMI box - the wacky, myriad mazurkas; the ineffable nocturnes; the proud polonaises; even the oddities, the juvenilia, the variations and a few one-off gems I ought to have heard before but don't remember (of which Barenboim's hypnotic performance of the Berceuse was the one I keep coming back to).

Within his pianistic parameters, Chopin was all things to all men; it's a paradox that with one instrument he runs perhaps a broader gamut, and touches on more harmonic experiments, than any of his contemporaries. But who was the real FFC?

Benita Eisler's quirky little book, if intermittently frustrating, does a good job of placing George Sand's biography alongside his, with the result that the self-centred lady of letters and monstrously unfeeling mother comes over as a more real human being than the chimerical composer. Portraits are few, and the famous early photo which shows an unhappy and already dying Chopin swollen from oedema, reproduced on the above cover, is only marginally less disturbing than the death-mask. The only truly romantic image, by Delacroix, was originally part of a strangely-proportioned double study with GS as the larger figure (the above reconstruction, not entirely felicitous, restores realistic dimensions to the sketch).

Never mind: the artist's life's his work, and what work. Apart from the Berceuse, the slow movement of the Third Piano Sonata and the A flat 'nouvelle etude', the piece that haunts me most is that odd little Mazurka in A minor, Op. 17 No. 4. It's easy enough to pick out on the piano, but I can't come anywhere near the metaphysical touch it needs. Not quite the best performance, but marvellous for the introduction and the poster's clever pasting below of the printed notes, is Horowitz's:

More classical with his right hand is Paderewski in 1912:

Little wonder if Bernstein as composer of 'Maria' found the unresolved opening and closing of the piece worth quoting in his Harvard lectures.

Louis Lortie, in a mostly-Chopin interview I've just written up for Pianist magazine, recommended listening to Liszt's pupils as the closest we might get to what Chopin sounded like (though the two composers, of course, had utterly different approaches). Here's one of the piano rolls of Eugen d'Albert he recommended. It was made in 1905.

Lortie's own commentary on the Etudes, with his luminous latest interpretations, can be found on his beautifully produced website. That evening of half-Lortie, half-Leonskaja can't be trumped for me by anything Chopinesque this year, though I look forward to hearing the magisterial Zimerman in February. The magic won't wear thin.

An irreverent, possibly irrelevant epitaph, from the other side of our listening obsessions this New Year - more Cole Porter, whose better-known classics we'll be singing in our odd little choral group later this afternoon:

When, in Venice, Georgia Sand with Chopin romped,
Her libido had the Lido simply swamped,
But today who would be buried in the sand?
Why, the leader of a big-time band.

The sentiment almost certainly isn't apt, given Sand's catty remarks about her invalid's nonexistent sex-life, and has more to do with finding yet another rhyme for 'The Leader of a Big-Time Band'. Still, it's surely outrageous for 1943, and trust the sublime Ethel Merman to have gotten away with the belting of it. Kim Criswell does a great job on her disc of show songs The Lorelei, which I'm playing a lot at the moment alongside La Merman, and Hampson in Jerome Kern.
Posted by David at 13:22

Happy New Year! I also love that mazurka, thanks for those contrasting performances.

from Catherine Nixon
Dear David, a very Happy New year to you.
The polychrome statue in your last but one blog is that of the Jesuit priest St Francis Xavier, not Borgia. He was a co-founder, with Ignatius de Loyola, of the Society of Jesus, and like him was of Basque nobility, of the Navarre. Jesuit churches throughout the world always have statues of these two saints, with Ignatius holding the Bible, and Francis Xavier holding a cross. The statue of St Ignatius is always to the left of the altar, with St Francis Xavier to the right, as you come into the Church.
I am surprised David Damant didn't beat me to this emendation.
Catherine Nixon, Clare College, Cambridge.

There, I'm afraid, Catherine, you're emphatically wrong, as you would have realised if you'd been to the exhibition. There are three full-length polychrome statues in Room Two; the others are of St Bruno and Saint Ignatius Loyola.

This, I can assure you, is St Francis Borgia, beatified in 1624. Cano's portrait is placed alongside what I felt to be the most lifelike and pleading of all the statues.