Alas, there were no production photos available of the Rich Man's Frug at the Pompeii Club, tongue-in-cheek highlight of the Menier Chocolate Factory's production of Sweet Charity. We squeezed in last night; I'd link, but the show's sold out there prior to a TBC West End run. Hardly the next best thing, then, to have the Fosse original on YouTube. The whole frugging works, in fact, above, which is why I think we can put up with a bit of not inappropriate Latin dubbing; the English-language clip only has the first couple of minutes. 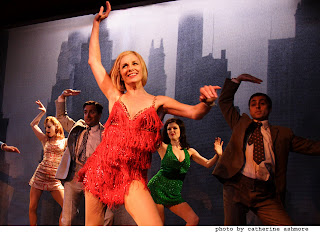 Stephen Mear's choreography at the Menier (photograph above, like the others below, by Catherine Ashmore) pays homage, but his ChocFac Frug also manages to raise a laugh or two from its poker-faced men in white polo-necks and leggy lead girl (Ebony Molina). Where do they come from, all these bright young things? The answer's simple: from the show-training of our many colleges and drama schools, which seems to be better than ever. In the past fortnight we've also seen two handsome leading men who can really sing - Julian Ovenden in Annie Get Your Gun, followed here by Mark Umbers, who plays all the unreliable men in Charity Hope Valentine's hopeless love life. Here he is with Tamzin Outhwaite's heroine at Barney's Chile Hacienda. 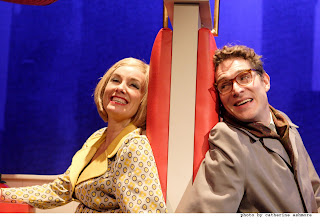 Outhwaite, whose departure from EastEnders probably coincided with the end of my on-off addiction, can sing, articulate, dance and look good, but for me she doesn't quite have the X-Factor which I found in Josefina Gabrielle's sassy sidekick no. 1 (pictured here with Outhwaite and the also excellent Tiffany Graves).


'Something Better Than This', the girls' big trio, is quite a number. So are the other known quantities - a jaded 'Big Spender', 'If My Friends Could See Me Now' and a spoofy, pre-Hair 'Rhythm of Life'. Otherwise Cy Coleman's score and Dorothy Fields's lyrics have their dodgy moments. An all-out witty entertainment like Annie Get Your Gun or La Cage aux Folles it ain't, but it was brilliantly done here with all the economies turned into virtues, and a superb brass trio in Nigel Lilley's nine-piece band (though I don't see why in that small space any miking was necessary).

As for the source, I guess you just have to forget the film original, as I can't when Sondheim's A Little Night Music fails to deliver the second-half magic of Bergman's Smiles of a Summer Night. Here the problem is Sweet Charity's several cop-outs compared to its inspiration, Fellini's roller-coaster Le Notti di Cabiria. It might have been wise even in 1960s New York, well evoked, to make Charity a dance-floor hostess who doesn't go all the way rather than a happy hooker, but oh, the end, the end. I won't spoil it, if there's anything to spoil, but Mr. Oscar Lindquist is not really a cad, and doesn't evoke a response anywhere near to the heartbreak of Giulietta Masina's Cabiria. Amazingly, the last seven minutes are on YouTube, but not all at once. So we can see the full expressive range of the great Masina when faced with a horrible truth. Spoiler alert: better watch the whole film first, but for a sample of Masina's plastic art you can't do better than this.

Believ it or not, there's an optimistic aftermath. I don't know how the above poster could have been satisfied with ending where he did; this ultima scena takes up exactly where the above leaves off. Nino Rota's score works its usual magic.

Pure cinematic genius: Fellini knows how to get the best out of his extraordinary missus. And of course it was Cabiria's Oscar nomination which prompted Masina to go off to Hollywood little thinking her character would triumph (she describes it amusingly in an interview attached to the DVD of La Strada) and which inspired Bob Fosse to think of adapting the film for Broadway. I got bored when the movie Sweet Charity turned up on TV some years ago, but I'll take one expert's word for it that this is one of the few great musicals filmed in the 1960s and give it another try.
Posted by David at 11:58

Giulietta Masina is a screen goddess. Fellini would only have needed to point his camera in her face and the expression did the rest. Thanks for the chance to revisit the end of Nights of Cabiria.

So glad you enjoyed my client Mr Lilley's work... what a gorgeous evening it is.

But if you know him, I wonder what his views are on the miking situation. I would have thought it unnecessary there in the Menier, but maybe there were practical reasons.

To me, it flattens everything out, and of course you can never tell where the voices are coming from. The same problem bedevilled the Phil's live accompaniment of the Peter and the Wolf animation.

Thanks for recalling, albeit via a proxy production, happy memories of the Broadway original that I saw with Chita Rivera, Helen Gallagher and Bob Fosse's choreography.

I have to say I think it's a bit unfair taking it to task for not being truer to Fellini and the sui generis La Masina--a basic idea was taken and totally reimagined. Like Baroque Opera, in which a stock plot becomes the skeleton on which astonishing arias are hung, Sweet Charity's story line is a pretext for astonishing dance. Given a hell-bent-for-leather performance of Big Spender, questions of plot become insignificant--or at least so it seemed to one 22 year old being exposed to the wonder that was (is) La Rivera for the very first time.

Others of more vulnerable age recalled to me Juliet Prowse here. But where is she now? Whereas La Rivera, what a phenomenon.

I know what you mean, though, Will. And Traviata isn't 'realistic' like Dumas's Dame aux camelias: it becomes something else.

I guess I was just disappointed, seeing it through to the end for the first time, that it just had to be a Rondine-like her-past-comes-back-to-bite-her (in this case because the neurotic can't cope with the ghosts of her former lovers).

I suppose, too, seeing it after Cage aux folles here, that I looked in vain for a bit of depth. But, hey, that's the world of musicals for you - excepting Sondheim, Herman, Jule Styne etc...

Vulnerable - I meant venerable. Maybe a Freudian slip now that the old ma is getting frailer?

"The Old Ma" too?! Client, yep... I'm his agent (the day job). And bloody proud I am of him too. I will ask him about the amplification.

The mater, Gavin. And Will, wasn't Mrs Fosse, Gwen ('A little bwains, a little tawent') Verdon, the original Charity? When did Chita enter the picture? This has kindled a Kander and Ebb YouTube search from a friend, who sent me a clip of Chita at her best.

Right you are about the Verdon-Fosse marriage and yes, Gwen was the original Charity. She got huge reviews but also found the sheer amount of dancing was beginning to be exhausting at her then age.

I remember one man who was crazy about Broadway dance and saw the show every week wrote a complaint letter to the theater section of the NY Times. She had asked that a small snippet of one reprise be cut to give her a quick breather at one point. He said he felt cheated because his ticket price remained the same while the show was now shorter. Verdon did some fast and sour figuring, timed the section that had been cut to just over a minute and a half, and then sent him a personal check for something like 27 cents.

Dear lord, how do I remember these things 43 years on?

The show opened in late January of 1966. I saw it in September of 1967 when Chita Rivera had taken it over, replacing Verdon and achieving a huge success all her own.

The pre-teen who was going to opera, ballet, concerts and theater on his own since age 11 was also a natural archivist: I still own every program to anything I ever went to. Some day, the heirs are going to have such fun throwing it all out.

Wonderful insights, Will, thanks: you (and I) are history, in the sentimental Broadway sense rather than the rude one, let's not forget.

I keep programmes too, but I also have a curious memory for actors I saw in rep when I was a kind and for who, say, was Fifth Jew in the 1977 Royal Opera production of Salome (well, maybe that's not such a rare example - it was John Tomlinson...)

A kid, I meaned, not especially kind.

Oh, I knew exactly what you meant--I just thought you'd thrown the German word for child in for effect.

But for the record, I think you are very kind. :-)

You should meet a friend of mine, who has the same kind of memory. If you refer to the 1958 Walkure at the MET, he'll immediately reply that it was the revival with Carlotta Ordassy as Helmwige!

Well, certain Valkyries can make an impression. Irene Theorin (don't ask me off the top of my head which one she was) sang Brunnhilde Lisa Gasteen off the stage. Not difficult.

I love the intelligence that Tatiana Troyanos sang a nun in The Sound of Music (if I remember correctly). And of course celebrated dubber Marni Nixon is a sister in the film.

But this could run and run.