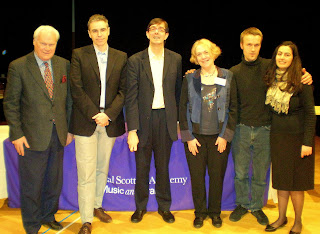 There were some seasoned campaigners at the Glasgow conference preceding Friday night's world premiere of Prokofiev's original War and Peace. Left above is David Lloyd Jones, who back in 1972 conducted the first staged performances in the UK, and who spoke so entertainingly about the circumstances on Thursday afternoon. Next to him is Prof Simon Morrison of Princeton, fellow biographer and instigator of 2008's original-version Romeo and Juliet to Mark Morris's choreography. Then me, and on my left the star of the show, Dr Rita McAllister, whose work on what Prokofiev first wrote in 1941-2 included orchestration of those portions left in piano score and brought a masterpiece to the Royal Scottish Academy of Music and Drama where she's worked for so many years. Gabriel Prokofiev, new-music pioneer and son of much-missed Oleg and the lovely Frances, has one arm around her and the other around RSAMD researcher Christina Guillaumier, who made the conference happen. Thanks to Stephen Broad, Head of Research and Postgraduate Programmes in Music, who took the photo and was a genial animateur throughout the day. 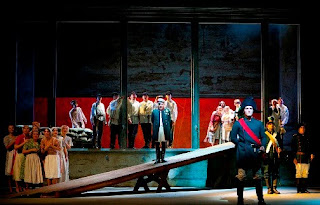 As for the show (pictured above by Ken Dundas), performed by students from the RSAMD and their sister conservatoire in Rostov-on-Don under the watchful long-term eye of director Irina Brown, you can read rather a lot about what I thought of it in this Arts Desk review of War and Peace.

Do go and see it in Edinburgh next week if you can, though prepare to do without the council of war scene at Fili containing Kutuzov's great aria; that came much later. 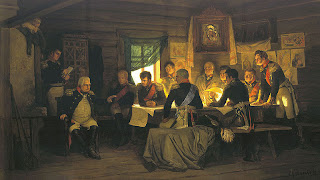 The conference went well enough, I thought. On Thursday morning, Simon filled in some of the Soviet-era details and Christina examined traits of Prokofiev's operatic style, which strikes me as ever more extraordinary the more time I spend looking at it (and I'm looking at it a lot at the moment, preparing a big article for the forthcoming Royal Opera production of The Gambler). I reminisced about the four productions I've seen starting back in 1991, and their varying degrees of success in trying to make a performing version (a problem that hadn't really arisen for the RSAMD). Then Irina took time off from frantic final preparations to fuel our keen anticipation. She's an engaging speaker and a fun person, as I know from having her to hand as translator when I met Alfred Schnittke all those years ago and from her production of Preissova's play Jenufa at the Arcola Theatre.

After lunch, we heard some of the vocal talent I've cited in the review showcased in appropriate excerpts. Gabriel spoke to the RSAMD's Head of Vocal Performance Professor Christopher Underwood, DLJ waxed lyrical about discovering and putting on the opera, and Rita rounded off with chapter and verse about her work. She proved very reasonable and unself-important about its role in the general scheme of things - as we've all since discovered, the performing version has some revelatory new material but doesn't displace some of Prokofiev's later work. Its pacing, though, is impeccable - something that's never quite worked in all the compromised productions.

Asked to sum up, I found myself struck by the passing of time and the place of this big event in history, if that doesn't sound too portentous. It was nearly 30 years ago that I first read swathes of Tolstoy's novel sitting in a five-hour queue at the Glasgow Passport Office during a strike. How differently I understood it so many years later. And of course it's nearly two decades since Gergiev first came to our attention with his crazy ambition to mount five Prokofiev operas in a single Kirov season. Well, we're all still here - except, alas, for Oleg and the Downeses. Ted, as his colleague David reminded us, conducted the first UK concert performance in Leeds back in the late 1960s.

Anyway, the enormity of the achievement only dawned on us in the hours following the triumphant curtain, though we all came out jolly enough. 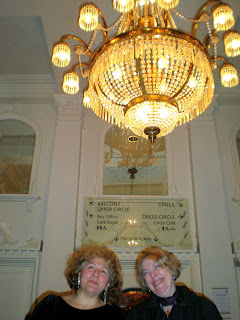 I hope Irina and Rita won't mind me posting this post-show photo in the glammed-up foyer of the Theatre Royal. It gives us the chandeliered opulence we hadn't got in the 11-scene version of the opera, since Natasha's meeting with Andrey at the New Year's Eve ball was a later addition.
Posted by David at 17:38