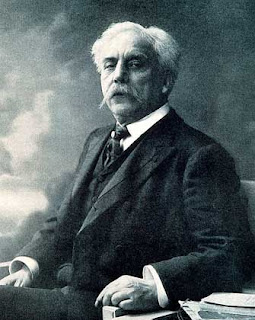 I was going to be pretentious there and begin in French - well, 'un coeur en hiver' does sound so wonderful, like 'ou sont les neiges d'antan?' which has to be better than Hofmannsthal's German in Rosenkavalier ('wo sind die Schnee von vergangenen Jahr?') It's the title of a French film, not as good a one as the best of the just-departed Eric Rohmer (how well I remember seeing A Tale of Springtime with five other people in the late, lamented Lumiere Cinema on the night of a World Cup quarter-final). To mourn him gently, what could be better than late Faure?

Poor, afflicted Gabriel (pictured above), going deaf, increasingly ill and losing many of his friends to the grim reaper, simply carried on in the line of increased harmonic complexity and chromaticism, allied to polyphonic singing lines in his chamber music. It struck me last night, listening to the very late E minor Quartet from our friends the Helikons who so generously returned to the BBCSO class, that for 1923 this is still amazingly experimental music. It's surely more durable than dodecaphonic Schoenberg, and of course much more melodic, but still hard to grasp. I've just read what my colleague Jessica Duchen has to say about it in her Phaidon Faure mini-biography, and I think she hits the elusive nail on the head:

The off-centre, syncopated rhythms, the extended phrases, the intricate counterpoint and dense textures, the often bizarre harmonies and apparently endless sequential progressions are characteristic of late Faure, but here reach their apex of concentration. Even world-famous string quartets have been known to make certain cuts in the piece which they feel renders it more intelligible to both performers and listeners. However, if performers accentuate the quartet's energy, rhythmic vigour and the nuances and contrasts of its stylistic language, rather than only its seamlessness and smoothness, the music shines out in vivid relief as a uniquely intense, rhythmically intricate and spiritually vigorous, abstract work. 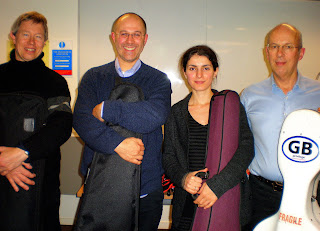 'Our' Helikon Quartet (Patrick Wastnage, Nikos Zarb, Rachel Samuel and Graham Bradshaw pictured above at the end of their session last night), fresh from a day's recording of Debussy arr. Colin Matthews in their other role as BBC Symphony Orchestra players, said they found the finale especially problematic. There they did just what Jessica suggests - accentuated the energy - to get through it. I certainly didn't have a problem with the enigmatic aspirations of the slow movement, where the viola and then the first violin seem to be reaching towards a heaven that eludes their grasp. And one of the students, Piala, rightly pointed out that this was stream of consciousness writing very akin to Virginia Woolf's, and with equal discipline behind it.

After they'd gone, we had a brief and, on my part, not very detailed wallow in more late Faure. I've been listening to Katherine Stott's wonderful set of the complete piano music, marvelling again - as I first did when I came across them with Paul Crossley playing - over the harmonic adventures of the Preludes. We heard Nos. 3 and 4, followed by the colossal lament of the F sharp minor Nocturne from 1913. I was searching on YouTube, and didn't find any great heights in the works I wanted, but perhaps the most magical pianist on there is Marguerite Long in 1936, playing the D flat major Nocturne of 1894.

After our foray into the late piano music, I contrasted the fantastical Allegro vivo of the Op. 115 Piano Quintet with the relatively straightforward finale of the still very beautiful earlier Piano Quartet (C minor, Op. 15). You can hear that in the hands of the glorious Frances Angell and her colleagues in the newly-formed Turner Ensemble at Kings Place on Sunday evening. Their debut programme also includes the Janacek Concertino, and it's not to be missed. After the Loddon Mill experience, I'm also expecting them to be much more communicative than the Borodin Quartet in its latest incarnation - a bit of a disappointment on Saturday evening, which I've written up for the Arts Desk.
Posted by David at 12:48

I hardly know any of Faure's chamber music, but have heard at least a little of the _C_-_Minor_ _Piano_ _Quartet_, which I understand to be loved by many. I have also heard late Faure described as elusive. And to think that he, like the slightly-earlier Saint-Saens, lived through the late 19th Century and the entirety of Debussy and much important Ravel! I read not long ago that Saint-Saens did not care for the Impressionists, but would be curious to read more on that subject.

Yet my primary purpose for coming here this morning, and again an avowedly-off-topic one, is to hope, and expect, that you know about tomorrow's _CD_ _Review_ since its first hour-ad-a-quarter would seem to have your name writ _LARGE_ upon it, as is mine at its opening! I doubt if Sir Charles can better his EMI Dvorak _Eight_, but hope he at least equals it! There are _Sevenths_ which I like more than his EMI, so hope he has something better for me here.

Hoping that this finds you and yours well, and with, if I have not already extended them, best wishes for 2010,

p.s. Noting your references to _Sweet_ _Charity_ in another thread, I heard, and rather enjoyed, the film version some years ago, but thus far have not heaard the original stage version, not even a recording of the songs. Yet I did enjoy the McGlinn _Annie_, though again regret that there is only a very little of the book.

Now's the time to splash out, then, JV. Get yourself the cheap and, I think, available Stern-Laredo-Ma-Ax piano quartets, THEN Domus (Hyperion) in the late piano quintets, THEN Kathryn Stott in the complete piano music.

Since Faure and Massenet share the same birthday, it would be impossible to fit all that music onto 12 May, and my G&S cycle begins the following day, Sullivan's of course, then taking up much of the remainder of the month. Yet, were I to buy some, if not all, of these recordings you recommend, I could conceivably sprinkle them throughout that remainder, or else try to fit some of them in earlier alongside Brahms and Tchaikovsky, though the former solution would seem to be better. I am having to make another adjustment this very month since the musician in my building who also helps me with certain mundane tasks gave me one of Herr Brendel's sets of the late Schubert Sonatas for Christmas, and thus I think I will move some earlier Schubert Symphonies back to alongside a few of the earlier Mozarts at the beginning of next week, thus freeing up a bit more time during the Schubert at the end of the month. I have and enjoy the same artists you suggest for the Faure Quartets in the Brahms's, and, if I am not mistaken, Domus may now be the generally-preferred ensemble in that latter repertoire.

_The_ _Isle_ _Of_ _The_ _Dead_ is indeed today's _BL_ feature, though I somehow thought it was some other Rachmaninov. Following the Dvorak at the beginning of the programme there are to be two new Martinu issues. Much time after _BL_ is to be devoted to Haydn. It will be interesting to hear if the same recording of _Romeo_ _And_ _Juliet_ you recommended to me here some time ago will still be your recommendation next month.

I understand that Sir Charles' English _Ariadne_ is due to be recorded this coming week, or at least to begin then.

One wag I know translates the phrase, "Where is the snow downtown?"

Sad news - Sir Charles has had to withdraw from the Ariadne project. I was so delighted you alerted me to it, JV, as I'll be in Scotland, but it's not to be. At the moment, it seems we were very lucky here to get those two treasurable Philharmonia concerts back in December. But he has such reserves of energy, let's hope he'll rally again.

What _DREADFUL_ news, though I feared this could happen. I hope they decide to at least delay the project rather than proceeding with it under another conductor at short notice, though, contracts and artist availabilities being what they are, they may either have to fully cancel or move on without Sir Charles. This is small consolation, if one should call it that, but at least my Kempe download will now not be shoved into the background, I actually having played, and re-enjoyed, it just a few days ago. There is not room for three Strauss operas in my June schedule as it now stands (or so it seems), and so I moved this one to January this year, where I had a gap, though should probably put _Ariadne_ into June since it was Strauss's own favourite among his operas, thus moving Sir Charles's _Salome_ to January possibly next year.

Did you hear the Scherzo from his new Dvorak _Seven_ with the Philharmonia this past Saturday? I enjoyed it, though the outer movements of that work are the touchstones for me, and possibly the slow movement as well. A brief clip I heard from the new _Eighth_ suggests that _MAYBE_ he followed what was said on _BAL_ when that work was featured, and thus may have taken its opening in tempo with much of the rest of that First Movement.

The project goes ahead with Richard Armstrong. I'd have hoped for Ticciati, but I guess schedules aren't so easily readjusted.

I heard Maestro Armstrong conduct the 2003 Scottish-Opera _Ring_, but currently do not have any specific recollections of details apart from the production being rather revisionist. Yet I think I would have remembered if it had been an entirely-lost cause. I have not yet heard any of Maestro Ticciati's work, but come across his name from time to time on the Askonas Holt Website, and read there this morning that he recently became Music Director of the SCO. Mr. Robert Hugill, of whom you might have heard, joins us in regretting Sir Charles's cancellation, but feels the project will be in good, and even exciting, hands with Maestro Armstrong. At least we have the _Bourgeois_ _Gentilhomme_ Suite from last week's SCO concert as a taste of that Elgarian mantra?, what might have been. I further look forward to what Sir Charles, and his soloist, did with the _First_ _Horn_ _Concerto_.

I have long held the view that the plot of an opera does not matter very much, since the analysis of the human predicament is in the music. No sur-titles please. However there are exceptions. The plot of Ariadne is irritatingly a mess and Salome is sick

[I am now retreating to the bomb proff shelter ]