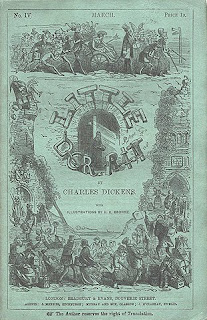 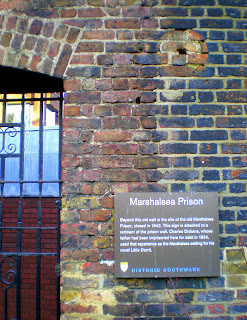 Infatuated with Dickens's Little Dorrit again after watching the dazzling ensemble work of the BBC serialisation over the New Year, we took advantage of a pre-snow, ice-cold Monday to explore her Southwark haunts. Via the George Inn of Pickwick Papers fame, with its galleries still intact, 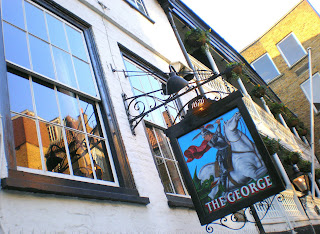 we carried on down the Borough High Street and turned left down an alley alongside the John Harvard Library, and there was the last remaining wall of the Marshalsea Prison. Dickens, whose father was briefly imprisoned there for debt in 1824, never forgot that terrible time when he lodged nearby and went off to work at the blacking factory by the river. The Marshalsea had already been demolished by the time he described it in David Copperfield and, here, in Little Dorrit:

It was an oblong pile of barrack building, partitioned into squalid houses standing back to back, so that there were no back rooms; environed by a narrow paved yard, hemmed in by high walls duly spiked at top. Itself a close and confined prison for debtors, it contained within it a much closer and more confined jail for smugglers. Offenders against the revenue laws, and defaulters to excise or customs, who had incurred fines which they were unable to pay, were supposed to be incarcerated behind an iron-plated door, closing up a second prison, consisting of a strong cell or two, and a blind alley some yard and a half wide, which formed the mysterious termination of the very limited skittle-ground in which the Marshalsea debtors bowled down their troubles.

The prison is down that parted Dickens briefly from the rest of the family - he went in daily for breakfast, just as Amy Dorrit goes out to work - but the wall is duly kept in good nick. 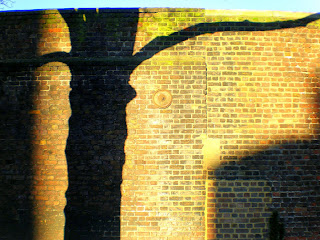 It forms a barrier between the former Marshalsea and the churchyard, now a park with a few forlorn tombstones stacked up against the wall, of St George's Church, where Little Dorrit was christened and where at the end of the novel she is married to Arthur Clennam. 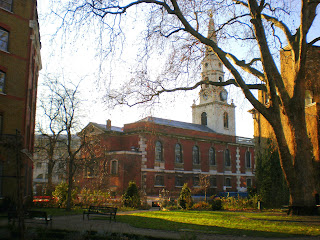 Though it's hardly among the most popular of the Dickens oeuvre, the book has given its characters' names to many of the nearby streets: Little Dorrit Court, Doyce Street - after the cheery inventor whose honest enterprise is set against the easy money of speculator Merdle - and Clennam Street, running alongside a splendid pub which has been in the hands of the same landlady since the 1950s: 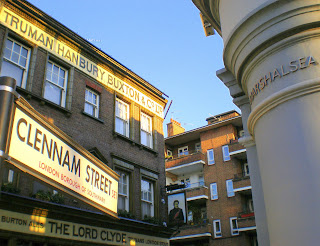 Little Dorrit would not have recognised the network of viaducts which gives the area its compelling character, though her creator would, of course. 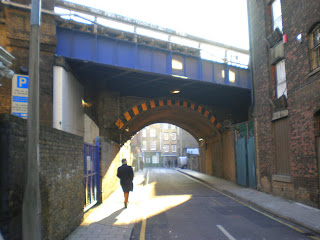 On the other side of this arch is a Catholic church with a virgin in a grotto outside flanked by the bridge and barbed wire. 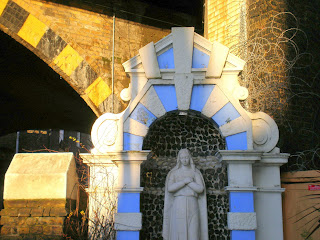 There's also a fascinating social housing project, constructed in 1864 by Sir Sydney Waterlow of the Improved Industrial Dwellings Company from a design by Prince Albert in the 1851 Great Exhibition. 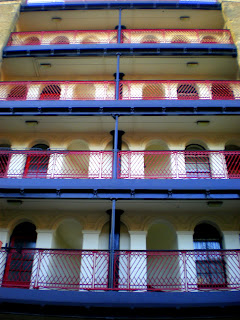 I guess Dickens would have approved of this. But by now we were in the zone reclaimed by the bourgeoisie, with care to keep some of the old identity as in the Menier Chocolate Factory where we saw Sweet Charity the following evening, and of course Borough Market. We toyed with having a Salt Beef sandwich in the Little Dorrit Cafe 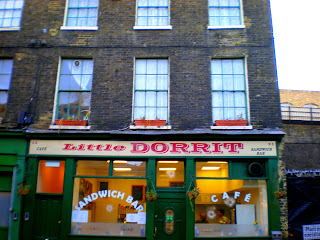 But I was in the mood for fish, so we ended up in the excellent, if slightly extravagant, surroundings of the Wright Brothers Oyster and Port House alongside the market, in a row of seventh heaven (next door to Konditorei and Cook and the Monmouth Coffee Company, which served up the best espresso I think I've ever had in London). And having left our shabby Dickensian mood behind, we who like to think of ourselves as bobos (= Bohemian Bourgeois, as indeed the great man himself, I guess, became) joined the frozen tourists, including the Italians who walk in packs and knock you off the pavement, on the now familiar Thameside route 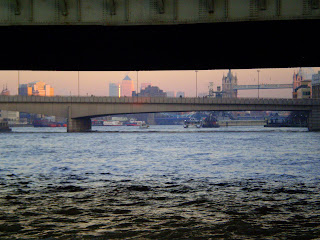 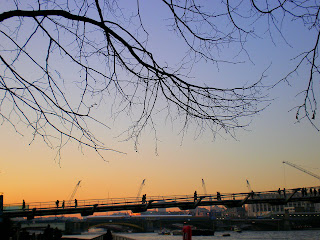 to the Tate Modern and were duly spooked by walking into the total darkness of Miroslaw Balka's How It Is in the Turbine Hall (these two photos were kindly sent to me by Tate Modern's press department). 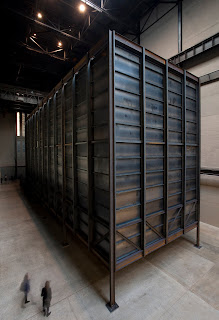 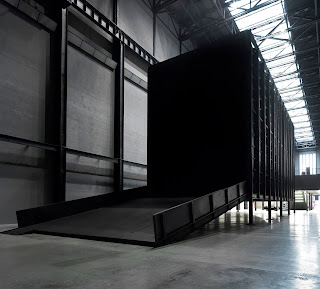 I dreamed about it last night - this weird sensation of seeing only the illusion of your eyes flashing in front of you. And yet when you turn round you can of course see the daylight of the power station windows; walking out is a liberation. Balka wants to suggest all sorts of unholy associations; the other exhibition of his currently running at Modern Art Oxford features shots of natural life going on in the now-touristified Auschwitz.

As for man's heart of darkness, a lot of it is disturbingly etched in Little Dorrit. I can't decide whether to re-read that novel or David Copperfield, which I probably first encountered much earlier. But I reckon the BBC series got it pretty much right, without discarding any of the characters. And the superlative line-up surprises not so much in the known quantity of the stars - though how well Andy Serkis, currently wowing cinema audiences as Ian Dury, makes you believe in the villainous Balzacian Rigaud, and how transformed is Maxine Peake, the consummately brazen Veronica of Shameless, as a Satanic Miss Wade with lesbian overtones - as in the performances turned in by the young actors. As with the singers/dancers in Sweet Charity, it made me feel that our drama schools are doing a superb job at the moment. It was actually Russell Tovey as John Chivery, Dorrit's rejected suitor tearfully resolved to help out the man she prefers, who made me cry. Tom Courtenay's hapless Dorrit had me on the brink at times, but I can't forget how Alec Guinness redeemed the very flawed, bizarrely structured Edzard film, above all in the scene where the newly-enriched former debtor can't shuck off his shame and loses the plot at a society banquet. It's here on YouTube:

from Catherine Nixon
Yes David, apologies and heaps of humility, mea maxima culpa - the polychrome statue IS that of Francis Borgia, not Xavier as I thought; even us Oxbridge snoots are wrong some of the time. I contacted a Jesuit friend who remarked that Borgia is usually depicted holding a skull, whereas Xavier is always depicted holding a cross- hence my mistake. Borgia was Aragonese, unlike Loyola and Xavier who were both Basque, and known to be bald, like Ignatius - Xavier is always depicted with a full head of thick black Basque hair - another way of telling the difference. I was right in stating that Jesuit churches across the world will usually have statues of Loyola and Xavier to the left and right of the altar, respectively.
I bought the Martinu version which you recommended in your Building a Library, and very illuminating it is too. Readers of your blog might like to know that BIS is doing a "6 for 4" edition of the Jarvi Bamberg SO recordings whereby all six symphonies are sold, properly cased etc., for the price of four, £30 instead of £45,
which is the one I bought for myself(I don't like the BRILLIANT edition, with those funny envelopes for the CDs and no decent liner notes).
Readers, go for the BIS!
Catherine Nixon, Clare College, Cambridge.

Well, I would otherwise have deferred to your much more detailed knowledge - but in this case, with the merest superficial knowledge gleaned from that marvellous show, I knew I was right.

This statue would indeed have been holding a skull, but the skull has gone.

Delighted you picked up on the Martinu - his time continues, with all those splended BBCSO concerts in the offing. It would be well worth your while travelling to one or two if you can. The excitement in the hall seems to be growing...

I don't think the Brilliant box is available any more. Anyway, the new artwork on the BIS set is rather becoming, if not as quirky as his cartoons which used to grace the original issues.

We had Little Dorrit on our Public Broadcasting earlier than you, in the fall. Neither Fritz nor I had read the novel, but we liked the BBC production, particularly the chance to see Tom Courtney in action again.

We certainly preferred Dorrit as a piece of material to Tess of the d'Urbervilles which preceded it. I had not read Tess and have decided not to, given the almost sadistic way Hardy sends her on a relentlessly downward trajectory ending on the gallows. I understand perfectly his point in the whole exercise but it finally became unbearable to watch and the night it ended, we moved almost silently to bed in a bit of a depression.

Of course, people say the exact thing about Puccini stacking the deck against so many of his heroines until the only possibility is either their death, or suicide.

Actually it was a DVD we watched - I like the total immersion rather than the half hour chunks (and New Year was the only time when we could manage it, in two sessions). I believe this Dorrit was first aired in 2008.

Haven't seen the BBC Tess, only the film with Nastassia Kinski many years ago. Am now looking forward to the Cranford special, which we missed at Xmas. The original series is perhaps the best 'classic serial' ever in terms of creative adaptation (and Carl Davis's music).

I thought I'd had enough of these crinoline and bonnet dramas, but the humanity and the acting seem to triumph these days.