Back to Göttingen: unter den Linden 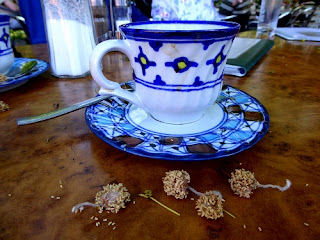 I could have had lime blossom tea, but in fact this is a finished double espresso outside at Göttingen's Cafe Botanik, still run to judge from that wonderful crockery by Iranian German Manoucher Amin, with the flowers fallen on the table from above (if slightly rearranged). That place was one of two things I keenly anticipated on my return to the International Handel Festival after three years' absence - apart from the performances, of course. The other was the croaking of the frogs in the University Botanic ponds. Never heard such a sound as I'd encountered on my first two visits.

This, alas, was a bit too early in May for full brekekekex coax coax-ing, captured in the film I embedded after the first, 2011 visit, and for that matter for the water lily flowers seen in that entry; since the festival always starts on the Ascension Day holiday, it depends on the religious calendar. But the froggies could still be seen if you looked carefully 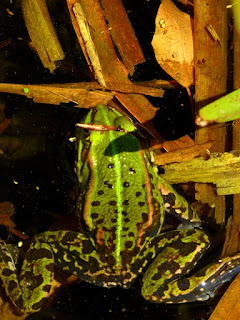 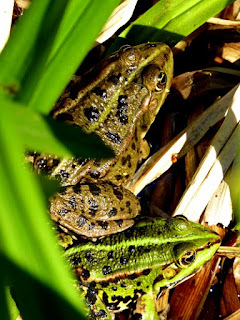 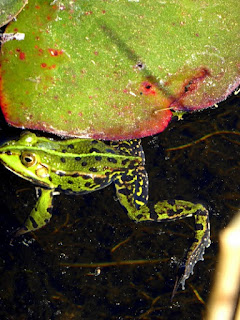 and the main thing was the extraordinary quasi-summer weather; Göttingen had been experiencing an intensely cold spring until our arrival, and then along came shirtsleeves-and-dining-outside weather. Even the three visits to the Botanics on each full day I was there showed a rapid onrush. Bloomings observed on Day One (6 May): Tulipa silvestris and Iris pallida adding colour to the as yet minimalist order beds, 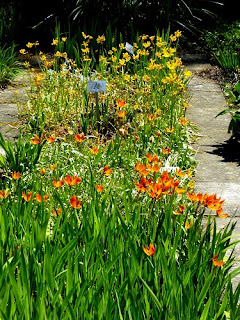 Narcissus poetica in the higher-level beds, 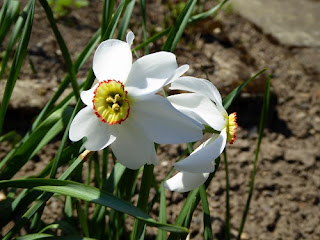 a tree peony flower at its height, 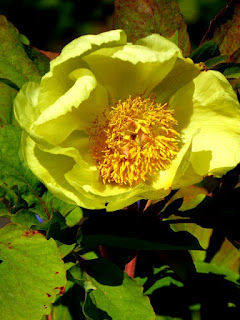 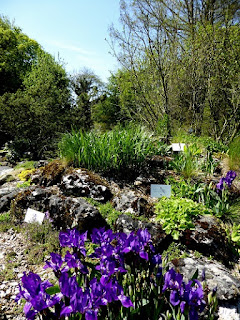 while the more standard variety was still in bud. 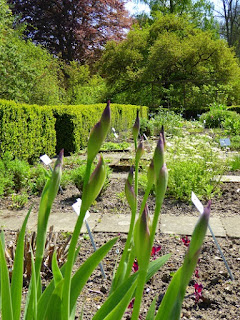 Plus, among the trees, the Acer palmatum 'Atropurpureum' is a glory of the rock garden, 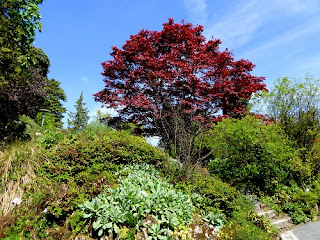 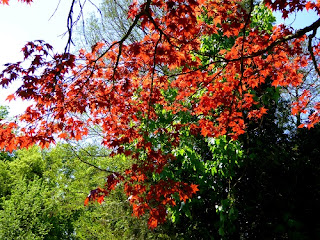 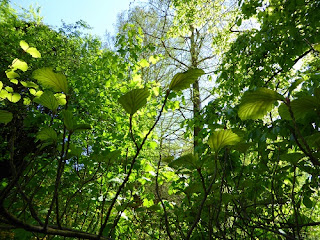 the wilder woodland to the north-east featured some attractive lichen 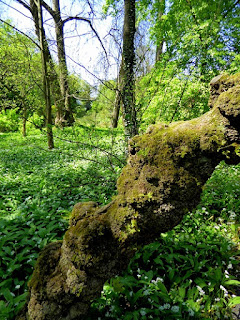 and various ferns were unfurling in the very bright sunlight. 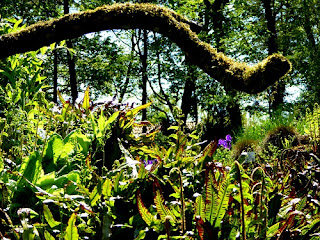 If the frogs were not as yet vocal, wildlife still obliged around the lake. A mallard hen was out on the water keeping a watchful eye on her brood 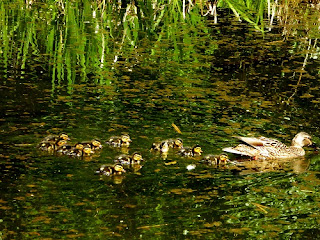 and when a drake and his mate came up to the bench in the shade where I was sitting, I imagined they were on the lookout for food, but in fact they settled quietly within metres after a bout of self-grooming and dozed. The Bach bag from Thuringia, by the way, was a subversive gesture at the Handel Festival (but surely any self-respecting Handelian would surely acknowledge who's God). 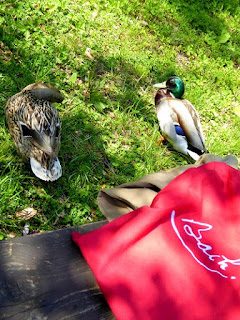 Seeing this mallard hen shutting and half-opening her eyes, and observing the way she breathed in and out, made me resolve never to eat duck again. Am I being discriminatory against the far less social goose, specimens of which nearly had my guts for garters at a Connemara wedding?

Day Two (7 May) brought me to morning coffee with guiding festival spirit Victoria Viebahn (on the right below) and some of the other writers she'd invited along. I won't embarrass them by naming them all. 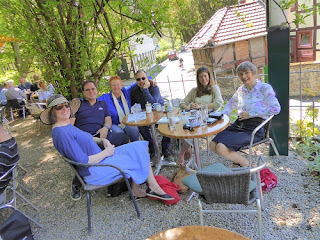 Several were subsequently amazed by what lay beyond the tunnel by the cafe. There are two: this one is less extensive, but gives you some idea of the green vision beyond. 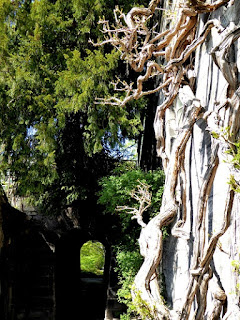 The tree-lined path along what used to be the city walls, broken only in the zone of the concert hall and State Theatre, bisects the Botanics and helps create this sense of apartness on one side (even though the ring road is not far away). Looking down from the path 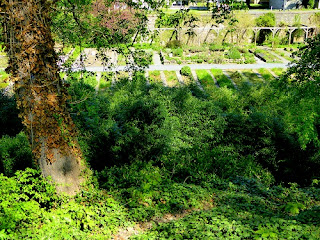 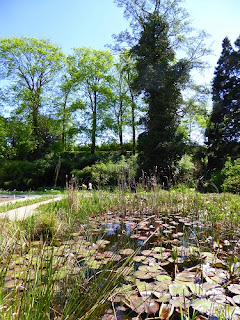 as well as from in front of one of the greenhouses on the 'worldly', cafe side. 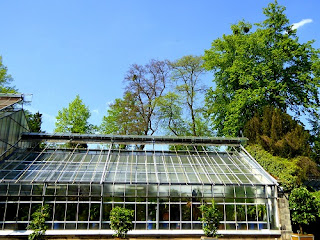 I did pop into some of them, and admired the typically German/Swiss collection of spiky devils from Madagascar. Here's Pacypodium lamerei with Senecio crassissimus attaching itself. 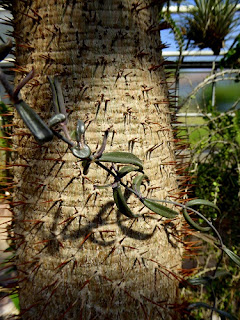 The last visit on 8 May, with the Italian and Bolivian among our contingent, witnessed another visitor. Again, we get plenty of herons by the Thames, but this one - I think it's a Great Blue to judge from the markings and the beak - was especially approachable 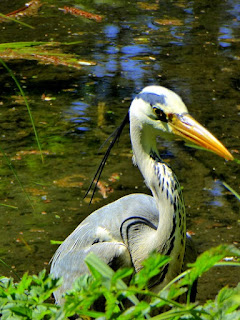 until it decided to take short flights around the Gardens, always settling close to its take-off point. 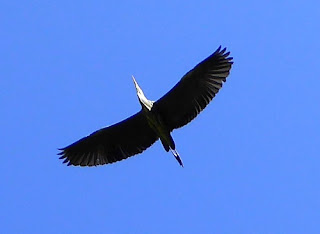 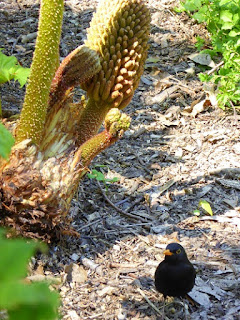 though the pair in the back yard here are always happy to splosh about not far from me the minute I've set down fresh water, about which they seem to be most particular. Mrs B has only just hopped out of this picture. 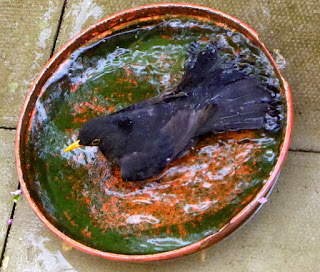 Anyway on that last day in Göttingen, the peonies, mostly in bud two days earlier, had decided to put on their show 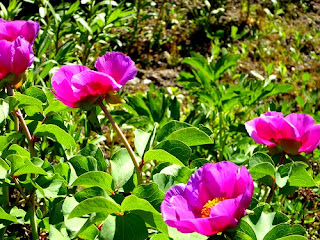 and bees were happy that they had. 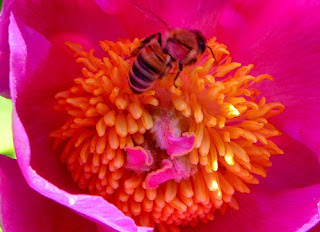 On, after that, to the university's art collection on its special Sunday opening (I was the only visitor). And I must return to other Göttingen discoveries new to me this year. In short, I really can't think of a more perfect town, both living and historic, among all the ones I've seen to date.
Posted by David at 06:45

The photos are excellent as ever - I'd missed the yellow peony, but then you missed the orchids. Also, I noticed that the wild garlic was wilting a bit in the heat. I had been looking forward to the little Breton creperie in Rote Strasse which has turned Vietnamese, but the Kartoffelhaus still does a delicious Erdbeeren Daiquiri, for which the weather was perfect. It is rarely warm enough in Scotland for a strawberry daiquiri to taste as it should.

I've been trying to recall where I had read about Simplicissimus before - had you mentioned it? - but now remember that it was in a TLS review. Now that you have reminded me, I'll have to track down a copy. It might well be my summer reading.

Wish I'd known about the Erdbeeren Daiquiri. My coffee addiction seemed a little fatuous in that heat.

Yes, as you said at the time a bit of watering in the Botanics wouldn't have gone amiss. I remember being told before that they're short of staff, and that's a shame. But in essence it's still the same wonderful place. I don't know why it resonates so much for me when we have Kew and the Chelsea Physic Garden so close to hand: maybe it's the preciousness of spending some time on each of the three days I tend to be at the festival that's so appealing. And the frogs, which I gather you caught being more vocal than I did.

By the way - have you visited Isabella Plantation or the Woodland Garden in Bushy Park yet? If it's Chelsea, it should be peak rhododendron &c in both places.

Yes, you're absolutely right - see the second half of this blog entry from last May: http://davidnice.blogspot.co.uk/2015/05/maytime-rus-in-urbe.html Thanks for reminding me - must go back soonest. A wonder of the world at this time.

As for the Chelsea Flower Show, never again. The horrid people among the crowds and the acres of hideous garden furniture put me off. As do the make-it-quick gardens.

All so wonderfully lovely. The frogs remind me of a post you put up some years back with remarkable photographs of frogs in springtime. Since then, when we've been out and about, I've tried several times to capture frogs in action in spring, to no avail.

Yes, that's the one I linked to above, with the little film containing the extraordinary noises (never heard them so loud anywhere else). You've done well with terrapins at Innisfree, though, haven't you?

Today we were wandering the Isabella Plantation in Richmond Park. A bit too late for the garish splendour of the azaleas as snapped last 1 May, but the rhodies are still doing well, and I snapped more parakeet, mallard and dragonfly action. Early summer has arrived.

My internet connection popped out just as I was responding, so if you already have a similar comment, just disregard this. If not, though, yes, those frog sounds are terrific--I had in mind yet another post with frogs, though perhaps it's all in my imagination. Our rhodies are out in force right now; the dogwood blossoms lasted a long, long time but have finally given up their blooms. Early summer, yes (though here right now it's so hot it feels like mid-July).

Maybe it was the 'froggie gang bang' entry on spring in the Scottish Borders? Here's the link: http://davidnice.blogspot.co.uk/2011/03/springtime-pond-life.html I certainly had a terrapin entry from Palermo, maybe you were thinking of that?