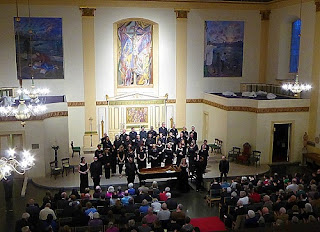 I sincerely hope not, and I still want to keep the flame of hope alive by continuing to help fight where possible for the survival of a full company as well as a full season. It seems from what chorus members told me on Friday night after their stunning third performance of Brahms's A German Requiem at St John's Waterloo - my colleague Alexandra Coghlan captured the atmosphere of the first event beautifully here - that new Artistic Director Daniel Kramer wants a full season too. I've stated as much in an article on The Arts Desk giving a cautious welcome. Sincere good luck to him if he, too, is sincere - I'd be amazed if he succeeded where Mark Wigglesworth failed in persuading the intransigent CEO that only by such means can a true English National Opera keep up its superlative, award-winning work.

This German Requiem, performed in the version in English with two pianists at one keyboard - the form it took at its 1871 London premiere - transfigured a work which can seem too gloomy and gloopy in the wrong hands. It still felt a bit that way to J, hearing it for the first time, but I assured him that no-one could have done more to strip away the layers of thick paint than Wigglesworth. Yes, the fugal passages were fast, the last stupendously so, but it never felt rushed even though it clocked in at around the 55 minute mark. 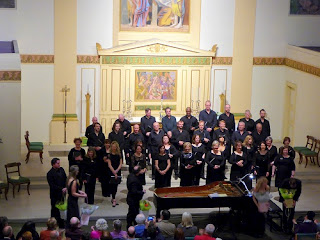 The harmonic relationships between movements were helped by no long pauses; the text was clear and meaningful - with the exception of Eleanor Dennis's radiant but more or less wordless solo; Benedict Nelson's contribution was of a piece with the chorus - simply because Wigglesworth made sure his chorus shaped each phrase towards its natural stress. Nothing could have been more momentous than the 'joy everlasting's of the second movement. Everything was tied together most movingly in the final 'Blessed are the dead', emphasising the sheer strength of the individual sections and with some spectacularly powerful unisons. And one hardly missed the orchestra in the flawless piano duo of ENO music staff treasures Kate Golla and Chris Hopkins (bowing with their bouquets in the second image from the gallery above).

Emotional meetings afterwards. I met up with Jane Livingston, the best of press officers during her long years of service for ENO, to collect my rose oil from Kashan (I'd asked her to get one for me on her recent trip to Iran; my tiny bottle of purest attar from the Kashan bazaar long having been used up, and a replacement not found in any of London's Iranian shops). It might have been a bit de trop of me to make Richard Jones, Mark and his wife Annemieke sniff it ('Turkish delight?' guessed Richard - close, of course). Was also delighted to see the chorus members who had helped me put their side of the argument on The Arts Desk, and to meet face to face at last the joint recipients of the Mackerras Conducting Fellowship I'd helped to adjudicate, Toby Purser and Matthew Waldren. 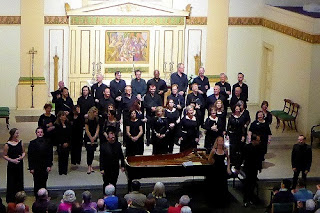 One familiar face from the chorus said that he'd never before encountered a conductor who could change the entire sound with a flick of the wrist. As postscript to return the compliment, I want to include some wonderful lines from two conductors. From Mark Wigglesworth, first in the programme, following carefully-selected observations on the work being performed:

An opera chorus spend their working lives revealing the full range of humanity on the stage. I know no finer exponents of this than the Chorus of English National Opera. I would like to take this opportunity to pay tribute to them and to thank especially their manager David Dyer and their Chorus Master Stephen Harris. It was their ideas that were the inspiration for these concerts and it is their leadership that continues to inspire us all.

And in private, reproduced with his consent, he wrote that he was

Conscious of what we have lost but right now even more conscious of the extraordinary relationship that has developed between the choristers and me. No-one can or will take that away from us.

Finally, from Toby Purser, again made privately and given with his consent:

To see a chorus in tears of emotion at the end of a performance, with a level of communication, respect and integrity almost impossible to imagine, is breathtakingly inspiring, but also a genuine torture - like having a glimpse of the ultimate artistic potential, only to see it withdrawn afterwards.

Amen to that, and let's live in hope that the knight on his white charger mentioned by one of the chorus members and quoted in the Kramer piece will come riding back in glory. We can dream, can't we?
Posted by David at 14:00

Beautiful comments from Wigglesworth, and beautiful words from a chorister about him here: "he'd never before encountered a conductor who could change the entire sound with a flick of the wrist."

Yet the sadness behind them is equally well summed up by Toby's remark. This, at least when tested by conflict, has been a Utopian dawn destined to be cut off in its prime - before it could even have a chance to go wrong (and it seems to me very unlikely that it would have done so). Some time back, choristers were saying that MW was the only shining light in the whole wretched business, and that is now more true than ever. I hope their confidence in Kramer is confirmed.

Makes me realise all over again what a loss Mark will be to ENO....I'm glad you quoted his words from the programme. They just show what a generous person he is, as Chorus members testify: 'with no ego whatsoever'

Generous, yes, absolutely, and it's extraordinary how his integrity has misinterpreted as arrogance and selfishness by writers who ought to know better. I always found it odd that Mahler as conductor as well as composer was accused of 'art-egotism', which is very different from personal egotism: it simply seems to mean someone who will go to any lengths to make sure artistic standards aren't compromised. And that has been the case throughout this very revealing period.